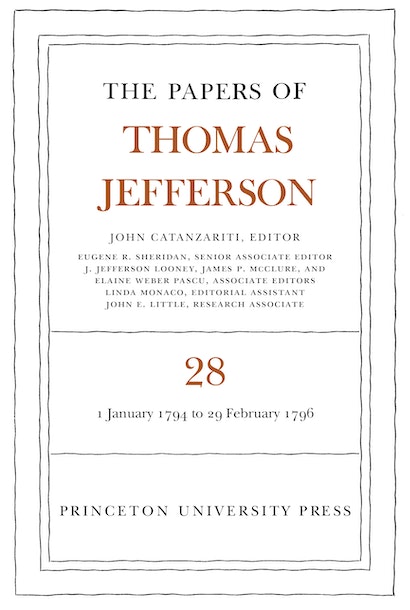 This volume brings Jefferson into retirement after his tenure as Secretary of State and returns him to private life at Monticello. He professes his desire to be free of public responsibilities and live the life of a farmer, spending his time tending to his estates. Turning his attention to the improvement of his farms and finances, Jefferson surveys his fields, experiments with crop rotation, and establishes a nailery on Mulberry Row. He embarks upon an ambitious plan to renovate Monticello, a long-term task that will eventually transform his residence.


Although Jefferson is distant from Philadelphia, the seat of the federal government, he is not completely divorced from the politics of the day. His friends, especially James Madison, with whom he exchanges almost sixty letters in the period covered by this volume, keep him fully informed about the efforts of Republican county and town meetings, the Virginia General Assembly, Congress, and the press to counter Federalist policies. An emerging Republican opposition is taking shape in response to the Jay Treaty, and Jefferson is keenly interested in its progress. Although in June, 1795, he claims to have “proscribed newspapers” from Monticello, in fact he never entirely cuts himself off from the world. At the end of that year, he takes pains to ensure that he will have two full sets of Benjamin Franklin Bache’s Aurora, the influential Republican newspaper, one set to be held in Philadelphia for binding and one to be sent directly to Monticello.