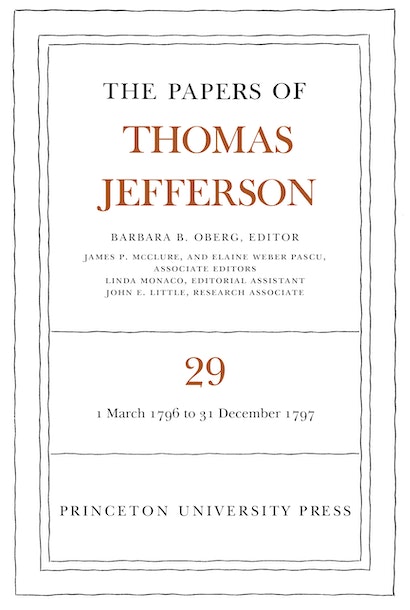 In the twenty-two months covered by this volume, Jefferson spent most of his time at Monticello, where in his short-lived retirement from office he turned in earnest to the renovation of his residence and described himself as a ”monstrous farmer.” Yet he narrowly missed being elected George Washington’s successor as president and took the oath of office as vice president in March 1797. In early summer he presided over the Senate after President John Adams summoned Congress to deal with the country’s worsening relations with France. As the key figure in the growing ”Republican quarter,” Jefferson collaborated with such allies as James Monroe and James Madison and drafted a petition to the Virginia House of Delegates upholding the right of representatives to communicate freely with their constituents.


The unauthorized publication of a letter to Philip Mazzei, in which Jefferson decried the former ”Samsons in the field and Solomons in the council” who had been ”shorn by the harlot England,” made the vice president the uncomfortable target of intense partisan attention. In addition, Luther Martin publicly challenged Jefferson’s treatment, in Notes on Virginia, of the famous oration of Logan.


Jefferson became president of the American Philosophical Society and presented a paper describing the fossilized remains of the megalonyx, or ”great claw.” At Monticello he evaluated the merits of threshing machines, corresponded with British agricultural authorities, sought new crops for his rotation schemes, manufactured nails, and entertained family members and visitors.

Barbara B. Oberg, a Senior Research Scholar and Lecturer with the Rank of Professor at Princeton University, is General Editor of The Papers of Thomas Jefferson.