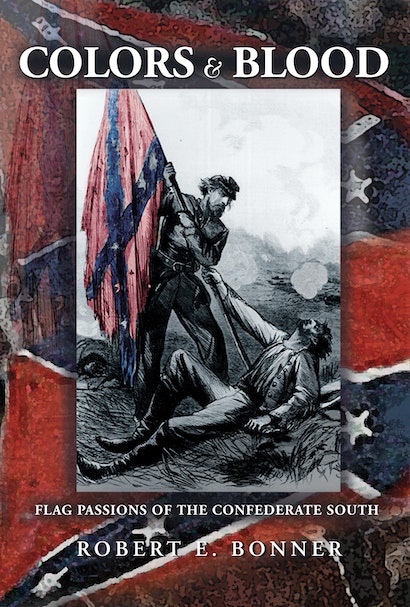 As rancorous debates over Confederate symbols continue, Robert Bonner explores how the rebel flag gained its enormous power to inspire and repel. In the process, he shows how the Confederacy sustained itself for as long as it did by cultivating the allegiances of countless ordinary citizens. Bonner also comments more broadly on flag passions — those intense emotional reactions to waving pieces of cloth that inflame patriots to kill and die.

Colors and Blood depicts a pervasive flag culture that set the emotional tone of the Civil War in the Union as well as the Confederacy. Northerners and southerners alike devoted incredible energy to flags, but the Confederate project was unique in creating a set of national symbols from scratch. In describing the activities of white southerners who designed, sewed, celebrated, sang about, and bled for their new country’s most visible symbols, the book charts the emergence of Confederate nationalism. Theatrical flag performances that cast secession in a melodramatic mode both amplified and contained patriotic emotions, contributing to a flag-centered popular patriotism that motivated true believers to defy and sacrifice. This wartime flag culture nourished Confederate nationalism for four years, but flags’ martial associations ultimately eclipsed their expression of political independence. After 1865, conquered banners evoked valor and heroism while obscuring the ideology of a slaveholders’ rebellion, and white southerners recast the totems of Confederate nationalism as relics of the Lost Cause.


At the heart of this story is the tremendous capacity of bloodshed to infuse symbols with emotional power. Confederate flag culture, black southerners’ charged relationship to the Stars and Stripes, contemporary efforts to banish the Southern Cross, and arguments over burning the Star Spangled Banner have this in common: all demonstrate Americans’ passionate relationship with symbols that have been imaginatively soaked in blood.

"Colors & Blood represents the best of recent Civil War scholarship applied to a topic of the widest recent interest.... Most impressive is [Bonner's] excavation of the place of flags in everyday life and thought. . . . Colors & Blood not only provides insight into the development of the Southern Cross, one of the most controversial images in contemporary America, and into the structure and values of the Confederacy, it also illuminates lasting intersectional understandings of flags in the United States."—Thomas J. Brown, Georgia Historical Quarterly

"Thought-provoking. . . . It will appeal to all those who have an interest in flags or the Confederacy, and to those who seek a clearer understanding of the roots of today's Confederate flag controversy."—Richard Sauers, Civil War News

"Bonner's outstanding research and analysis provide hope for those who still feel that first-rate scholarship might inform, contextualize, and transcend contemporary historically charged and emotionally passionate polemics. An outstanding work."—Choice

"A timely, thorough, and highly sophisticated discussion of the origins, context, and significance of the flag(s) of the Confederacy. Colors and Blood represents quite an achievement. . . . [F]or those who want to understand why the symbols of the Confederate South remained so powerful in the New South, Bonner's close reading of rebel iconography is just what we have waited for."—W. Scott Poole, H-Net Reviews

"The book is much more than a history of Confederates and their flags. It is a study of myth-making and symbolism, an interpretation of collective emotion, a meditation on war and violence, and, lastly, a judicious commentary on historical memory and contemporary flag culture. . . . This is a fantastic accomplishment."—Paul Christopher Anderson, American Nineteenth Century History

"By using the flag as an organizing principle for the study of the complexities of Confederate nationalism, Bonner has written a book that is useful for scholars, appealing to students, and of interest to the general public as well."—Anne Sarah Rubin, Virginia Magazine of History and Biography