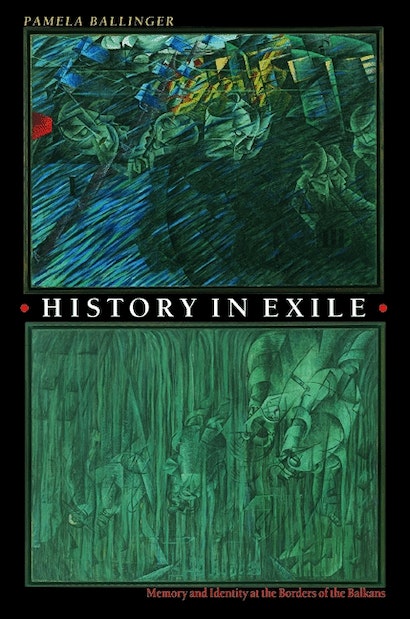 In the decade after World War II, up to 350,000 ethnic Italians were displaced from the border zone between Italy and Yugoslavia known as the Julian March. History in Exile reveals the subtle yet fascinating contemporary repercussions of this often overlooked yet contentious episode of European history. Pamela Ballinger asks: What happens to historical memory and cultural identity when state borders undergo radical transformation? She explores displacement from both the viewpoints of the exiles and those who stayed behind. Yugoslavia’s breakup and Italy’s political transformation in the early 1990s, she writes, allowed these people to bring their histories to the public eye after nearly half a century.


Examining the political and cultural contexts in which this understanding of historical consciousness has been formed, Ballinger undertakes the most extensive fieldwork ever done on this subject — not only around Trieste, where most of the exiles settled, but on the Istrian Peninsula (Croatia and Slovenia), where those who stayed behind still live. Complementing this with meticulous archival research, she examines two sharply contrasting models of historical identity yielded by the “Istrian exodus”: those who left typically envision Istria as a “pure” Italian land stolen by the Slavs, whereas those who remained view it as ethnically and linguistically “hybrid.” We learn, for example, how members of the same family, living a short distance apart and speaking the same language, came to develop a radically different understanding of their group identities. Setting her analysis in engaging, jargon-free prose, Ballinger concludes that these ostensibly very different identities in fact share a startling degree of conceptual logic.

Pamela Ballinger is Assistant Professor of Anthropology at Bowdoin College.

"Theoretically sophisticated, ethnographically detailed, and historically informed, Ballinger's account makes a valuable contribution to the 'anthropology of borders.' At the same time, it offers intelligent commentary on a variety of important topics in contemporary anthropology. . . . History in Exile, therefore, is essential reading for students and scholars in the humanities and social sciences who are interested in understanding the lives of people who have faced ethnic conflict and violence in the former Yugoslavia, Palestine, Kashmir, and other frontier zones around the world."—Loring M. Danforth, Slavic Review

"Pamela Ballinger has written a challenging and fascinating study of Italian migration from Istria in the wake of World War II. Exploiting the techniques of anthropology and history, linguistics and literary/cultural studies, Ballinger explains both the complex reasons for this process as well as the ways in which it has been interpreted and used over the past fifty years, both by the majority that left Yugoslavia and by the minority that stayed behind."—Andrew Wachtel, American Historical Review

"This book [is] disarming in its sincerity, inspiring in its humanism, and compelling in its sophistication. . . . Ballinger's ambitious and deftly woven analysis serves as a reminder of the anthropological project's vitality."—Keith Brown, Journal of the Royal Anthropological Institute

"Pamela Ballinger . . . analyze[s] the role of living memory in the preservation of community identity. . . . Making use of an anthropological methodology that resembles that of oral history, she has collected, transcribed, and analyzed the memories of her informants not so much to determine what actually happened in Istria after World War II, but rather to explore how memory has functioned historically to preserve, commemorate, distort, and mythologize the past."—Larry Wolff, Journal of Modern History

"History in Exile is a formidable piece of scholarship that will enrich the ethnography of Europe and the literature on memory.""—Leyla Neyzi, Anthropological Quarterly

"Pamela Ballinger has earned her status as an analyst of the Istrian Peninsula by the breadth and detail of her fieldwork and by her ability to excavate the historical complexity of the region and then situate it outside the parochial framework that has in general hindered local and international commentary on that area. . . . [S]he has been able to open up this part of the so-called Balkans to Europe (and vice versa) empirically and theoretically."—Glenda Sluga, Journal of Modern History