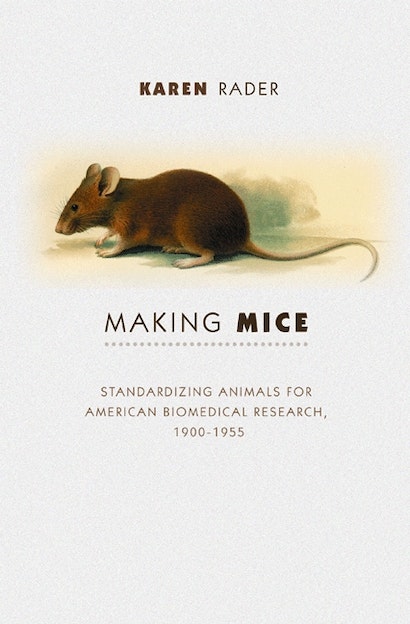 
Karen Rader introduces us to mouse “fanciers” who bred mice for different characteristics, to scientific entrepreneurs like geneticist C. C. Little, and to the emerging structures of modern biomedical research centered around the National Institutes of Health. Throughout Making Mice, Rader explains how the story of mouse research illuminates our understanding of key issues in the history of science such as the role of model organisms in furthering scientific thought. Ultimately, genetically standardized mice became icons of standardization in biomedicine by successfully negotiating the tension between the natural and the man-made in experimental practice.


This book will become a landmark work for its understanding of the cultural and institutional origins of modern biomedical research. It will appeal not only to historians of science but also to biologists and medical researchers.

"Extremely well written and enjoyable to read. . . . The study of human diseases using standardized animal models has now become routine practice, but its acceptability was established in large part through the use of inbred mice, as Rader convincingly argues."—Rachel A. Ankeny, American Scientist

"A brilliant synthesis of scientific, intellectual, and cultural history. Its subject matter is new, and the book's ultimate impact on scientific history will be significant. The product of ten years of research and writing, the tome is polished, cogent, and magnificently documented."—Choice

"Karen Rader has written an insightful and, at times, humorous chronological history of the famous Jax mice and their unflagging promoter, C.C. Little. . . . Rader beautifully illustrates the give and take between the scientific community and the general society."—Biology Digest

"In this compelling historical analysis, Karen Rader shows how the common mouse (Mus musculus) was transformed into a commodity, manufactured, and marketed not only to American research laboratories, but to politicians, health policy makers, and the members of the general public as well."—Susan E. Lederer, Journal of the History of Biology

"Rader's carefully researched and well-produced book will be indispensable reading for everyone interested in the laboratory mouse and more generally in the tools and practices of twentieth-century biomedicine."—Soraya de Chadarevian, Journal of the History of medicine and Allied Sciences