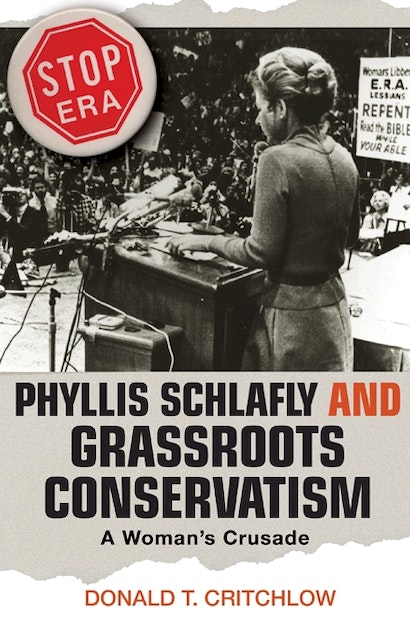 Longtime activist, author, and antifeminist leader Phyllis Schlafly is for many the symbol of the conservative movement in America. In this provocative new book, historian Donald T. Critchlow sheds new light on Schlafly’s life and on the unappreciated role her grassroots activism played in transforming America’s political landscape.


Based on exclusive and unrestricted access to Schlafly’s papers as well as sixty other archival collections, the book reveals for the first time the inside story of this Missouri-born mother of six who became one of the most controversial forces in modern political history. It takes us from Schlafly’s political beginnings in the Republican Right after the World War II through her years as an anticommunist crusader to her more recent efforts to thwart same-sex marriage and stem the flow of illegal immigrants.


Schlafly’s political career took off after her book A Choice Not an Echo helped secure Barry Goldwater’s nomination. With sales of more than 3 million copies, the book established her as a national voice within the conservative movement. But it was Schlafly’s bid to defeat the Equal Rights Amendment that gained her a grassroots following. Her anti-ERA crusade attracted hundreds of thousands of women into the conservative fold and earned her a name as feminism’s most ardent opponent. In the 1970s, Schlafly founded the Eagle Forum, a Washington-based conservative policy organization that today claims a membership of 50,000 women.


Filled with fresh insights into these and other initiatives, Phyllis Schlafly and Grassroots Conservatism provides a telling profile of one of the most influential activists in recent history. Sure to invite spirited debate, it casts new light on a major shift in American politics, the emergence of the Republican Right.

Donald T. Critchlow is the author or editor of twelve books on modern American politics, public policy, and business. He is a professor of history at Saint Louis University.

"[This] new political biography . . . by Donald Critchlow, follows Schlafly from her birth to the present day—at eighty-one, she is still putting out the Report. Critchlow, a history professor at Saint Louis University, argues for the exemplarity of Schlafly's life, which, he claims, parallels the rise of American conservatism."—Elizabeth Kolbert, The New Yorker

"In Phyllis Schlafly and Grassroots Conservatism, Donald T. Critchlow uses the career of the woman feminists love to hate as a lens through which to examine the neglected history of grassroots conservatism in postwar America. Critchlow combines scholarly rigor with fine prose to produce the best book ever written on this subject."—Bracy Bersnak, American Spectator

"Had Schlafly been a figure of the Left, this book extolling her remarkable achievements would join a bookcase of similar flattering portraits acknowledging her as one of the most influential Americans in the second half of the 20th century. But because her influence prevented a destructive feminist agenda from being enshrined in the Constitution, she has had to wait 50 years for this book—the work of a respectful academic who has delved into the archives to tell an important untold story."—Kate O'Beirne, National Review

"In this riveting, valuable book, Donald Critchlow makes the case for a Great Woman theory of history."—Charlotte Allen, First Things

"Phyllis Schlafly and Grassroots Conservatism: A Woman's Crusade, by Donald T. Critchlow is a biography of a conservative, activist woman leader and the history of the grassroots minions she organized, almost single-handedly transforming the image of a conservative woman from the little old lady in tennis shoes, searching for communists under her bed, to a movement of well-organized, sophisticated women volunteers who moved into party politics. She may be the only woman of the late 20th century who could be accurately called as influential as Susan B. Anthony."—Suzanne Fields, Washington Times

"Critchlow has provided an important and compelling new exploration of the rise of the postwar right."—Catherine E. Rymph, Reviews in American History

"As Donald T. Critchlow explains in impressive detail . . . two decades of experience in Republican politics, including a pair of unsuccessful congressional campaigns, taught [Phyllis Schlafly] how to craft arguments that would stir a wide audience, how to focus on hot-button issues and talking points, how to choose appealing representatives to make a case, and the importance of organizing at a local level and working tirelessly to fire up the troops."—Frederic D. Schwarz, American Heritage

"[Phyllis Schlafly] is now . . . the subject if an overdue biography, and fortunately it hasn't been written by a women's studies professor who hates her. Donald T. Critchlow . . . treats Schlafly with the respect she deserves. He enjoyed exclusive access to her personal files and provides genuine insights into her life and times."—Charlotte Hays, DC Examiner

"Critchlow has written a fine, and long overdue, biography of this activist from Alton, Illinois. He has also chronicled the rise of the modern American conservative movement after the Goldwater debacle. His is a bottom-up history of grassroots political organizing, and the role women played in it, and a top-down tale of the woman who led it. . . . [A] truly compelling account."—Karlyn Bowman, The Weekly Standard

"Donald Critchlow's heavily footnoted Phyllis Schlafly and Grassroots Conservatism: A Woman's Crusade is as much a history of red-state conservatism as it is a biography of a conservative blue-staters love to hate. Particularly when viewed through the prism of gender politics, Mrs. Schlafly's accomplishment is remarkable. . . . . Mrs. Schlafly took a movement of lumpen proletariat and brought it the center of American power and institutions."—Jessica Gavora, The New York Sun

"Donald Critchlow . . . has presented us with a comprehensive, meticulously researched and thoroughly readable biography. . . . Critchlow's book is likely to be the most comprehensive account of Schlafly's remarkable life for quite some time to come."—William A. Rusher, Claremont Review of Books

"Donald Critchlow . . . has written a worthy biography of the woman and her times. . . . By focusing on Schlafly and the grassroots conservative world she helped build, he challenges the knee-jerk idea that conservative foundations and think tanks wholly powered the resurgence of the right."—Abby Scher, The Public Eye

"Phyllis Schlafly and Grassroots Conservatism is a tour de force. By situating an important political figure in a broader social movement, Critchlow contributes greatly to our understanding of American politics in the last half of the twentieth century."—Jonathan J. Bean, H-Net Reviews

"Critchlow . . . fairly delineates [Schlafly's] beliefs and her objections to modern liberalism. It is a worthy contribution to the history of the conservative political movement."—University Bookman

"So influential has the Right been in shaping the American social and political culture in the last twenty-five years that one might be tempted to see its rise to power as inevitable. But as Donald T. Critchlow argues in his political biography of Phyllis Schlafly, one of the twentieth century's most influential conservatives, the emergence of the Right to a dominant position in national politics and in the Republican Party in the 1980s was an uneven process."—Sylvie Murray, American Historical Review