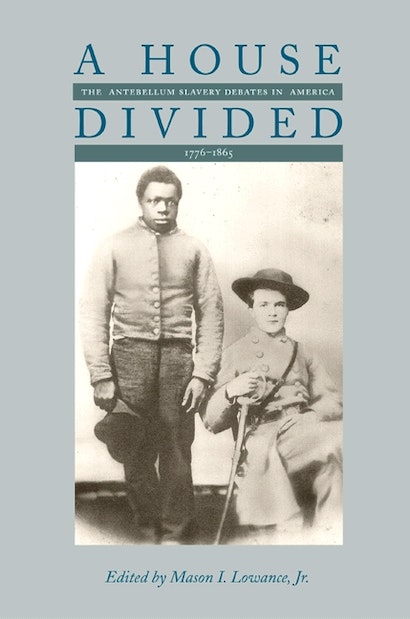 This anthology brings together under one cover the most important abolitionist and — unique to this volume — proslavery documents written in the United States between the American Revolution and the Civil War. It makes accessible to students, scholars, and general readers the breadth of the slavery debate. Including many previously inaccessible documents, A House Divided is a critical and welcome contribution to a literature that includes only a few volumes of antislavery writings and no volumes of proslavery documents in print.


Mason Lowance’s introduction is an excellent overview of the antebellum slavery debate and its key issues and participants. Lowance also introduces each selection, locating it historically, culturally, and thematically as well as linking it to other writings. The documents represent the full scope of the varied debates over slavery. They include examples of race theory, Bible-based arguments for and against slavery, constitutional analyses, writings by former slaves and women’s rights activists, economic defenses and critiques of slavery, and writings on slavery by such major writers as William Lloyd Garrison, John Greenleaf Whittier, Walt Whitman, Henry David Thoreau, and Ralph Waldo Emerson. Together they give readers a real sense of the complexity and heat of the vexed conversation that increasingly dominated American discourse as the country moved from early nationhood into its greatest trial.

Mason I. Lowance, Jr., is Professor of English at the University of Massachusetts, Amherst. He is the author of The Language of Canaan: Metaphor and Symbol in New England from the Puritans to the Transcendentalists and Increase Mather and the editor of Against Slavery: An Abolitionist Reader and The Stowe Debate: Rhetorical Strategies in Uncle Tom's Cabin.