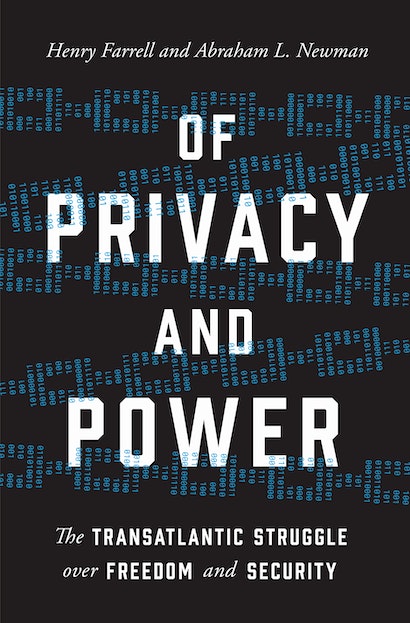 We live in an interconnected world, where security problems like terrorism are spilling across borders, and globalized data networks and e-commerce platforms are reshaping the world economy. This means that states’ jurisdictions and rule systems clash. How have they negotiated their differences over freedom and security? Of Privacy and Power investigates how the European Union and United States, the two major regulatory systems in world politics, have regulated privacy and security, and how their agreements and disputes have reshaped the transatlantic relationship.

The transatlantic struggle over freedom and security has usually been depicted as a clash between a peace-loving European Union and a belligerent United States. Henry Farrell and Abraham Newman demonstrate how this misses the point. The real dispute was between two transnational coalitions—one favoring security, the other liberty—whose struggles have reshaped the politics of surveillance, e-commerce, and privacy rights. Looking at three large security debates in the period since 9/11, involving Passenger Name Record data, the SWIFT financial messaging controversy, and Edward Snowden’s revelations, the authors examine how the powers of border-spanning coalitions have waxed and waned. Globalization has enabled new strategies of action, which security agencies, interior ministries, privacy NGOs, bureaucrats, and other actors exploit as circumstances dictate.

The first serious study of how the politics of surveillance has been transformed, Of Privacy and Power offers a fresh view of the role of information and power in a world of economic interdependence.

Henry Farrell is professor of political science and international affairs at George Washington University. He is the author of The Political Economy of Trust. Farrell lives in Bethesda, Maryland. Twitter @henryfarrell. Abraham L. Newman is professor of government in the Edmund A. Walsh School of Foreign Service at Georgetown University. His books include Voluntary Disruptions and Protectors of Privacy. Newman lives in Washington, DC. Twitter @ANewman_forward

"Talk about having a year. Most political economy scholars would be happy to have one standout publication in a year. Farrell and Newman produced two distinct pieces of scholarship, both of which deal with the less anticipated ramifications of deepening economic interdependence. Of Privacy and Power explains how the United States was able to get the European Union to adopt some (but not all) of its post-9/11 security measures on issues ranging from airline passenger data to finance. Interdependence empowered newer, nontraditional actors, creating new cross-national bargains."—Daniel Drezner, Washington Post

"An important contribution to political science, expanding on their concept of 'weaponized interdependence,' namely how the U.S. (and sometimes other political actors) uses access to international networks, such as SWIFT, to push other nations around."—Tyler Cowen, Marginal Revolution

"American debates about privacy and security tend to be framed in terms of purely domestic interests: This book details how those conflicts are critically shaped by international relations, and how the US and EU facets of that fight can’t be understood in isolation."—Julian Sanchez, Just Security

"Showcasing a 'new interdependence' framework, Of Privacy and Power analyzes how overlaps in the rules governing global information flows create power asymmetries that destabilize domestic policy bargains. The result is an understanding of the world where stable equilibria are rare, and distinctions between the national and the international are erased. This book delivers a politics of scale that gives researchers a useful structure for studying the international political economy as an integrated but unstable system."—Mark Blyth, Brown University

"This book persuasively argues that substate actors, including interior ministries and data protection officials, form international networks to accomplish internationally what they cannot win domestically. The clearest value of the book comes from its diverse case studies. The discussion of the 2000 Safe Harbor for commercial transfers of personal data from the European Union to the United States is particularly outstanding."—Peter Swire, Georgia Institute of Technology

"Unlike critics who see transatlantic security relationships as hegemonic or conflictual, Farrell and Newman discern connections that are deeply ambivalent and increasingly institutionalized. In Of Privacy and Power, they show that these relationships are profoundly restructuring the domestic institutions governing freedom and security on both sides of the Atlantic. Their bold concept of ‘the new interdependence’ should lead liberal internationalists and neorealists to revisit their views of the transatlantic order."—Sidney Tarrow, author of The New Transnational Activism