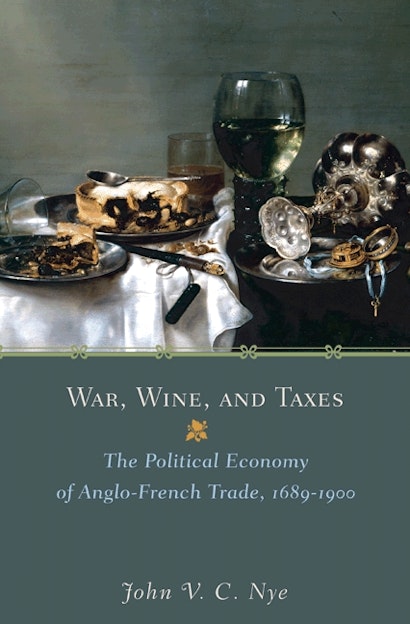 In War, Wine, and Taxes, John Nye debunks the myth that Britain was a free-trade nation during and after the industrial revolution, by revealing how the British used tariffs — notably on French wine — as a mercantilist tool to politically weaken France and to respond to pressure from local brewers and others. The book reveals that Britain did not transform smoothly from a mercantilist state in the eighteenth century to a bastion of free trade in the late nineteenth.


This boldly revisionist account gives the first satisfactory explanation of Britain’s transformation from a minor power to the dominant nation in Europe. It also shows how Britain and France negotiated the critical trade treaty of 1860 that opened wide the European markets in the decades before World War I. Going back to the seventeenth century and examining the peculiar history of Anglo-French military and commercial rivalry, Nye helps us understand why the British drink beer not wine, why the Portuguese sold liquor almost exclusively to Britain, and how liberal, eighteenth-century Britain managed to raise taxes at an unprecedented rate — with government revenues growing five times faster than the gross national product.

War, Wine, and Taxes stands in stark contrast to standard interpretations of the role tariffs played in the economic development of Britain and France, and sheds valuable new light on the joint role of commercial and fiscal policy in the rise of the modern state.

"Nye writes 100 percent pure, uncut nonfiction to get your geek on, putting the myth of three centuries of British trade superiority on trial. Examining the protectionist tariffs the country used against the French, particularly on agriculture and wine imports, War, Wine, and Taxes casts Britain in a less liberal light than most histories. Free trade being one of the hottest topics of our age, Nye's fresh hindsight is timely."—Maggie Dutton, Seattle Weekly

"Conventional wisdom holds that Great Britain was the great free-trade hegemonic power of the 19th century...Nye's fascinating new book aims to undermine the conventional wisdom, and it does so very successfully...Nye presents interesting, well-argued analyses of Britain's trade barriers on French wine and their effect on both the domestic brewing industry and the ability of the British state to raise revenues by taxing beer."—M. Veseth, Choice

"The core substance of the book is a clear, well-argued, methodically executed and explained attempt to rewrite assumptions about the realities rather than the rhetoric of British trade policy and the notion of free trade. There is always something exhilarating about an argument, especially when it is well presented. . . . It is heady stuff, and it has to be said the work makes a very convincing case for abandoning complacent, conventional assumptions. Likewise, the core contribution of the book succeeds very well in raising questions regarding the state, conceptualizations of the state, and ultimately the role of the state."—Nicholas Alexander, Enterprise and Society

"This is a very important work of economic history. . . . If you don't buy this book, it's OK. I'm sure your mother would understand . . . while she sits alone in her kitchen . . . thinking of nothing but your happiness."—Daniel W. Drezner, Daniel W. Drezner blog

"Nye has performed a useful service by providing an accurate portrayal of the true state of the trade policy of the British government, a policy that was often at odds with the free-trade claims of thinkers and politicians."—K. Steven Vincent, European Legacy