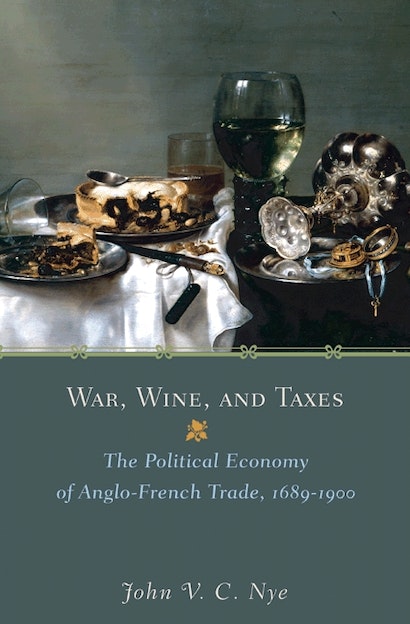 In War, Wine, and Taxes, John Nye debunks the myth that Britain was a free-trade nation during and after the industrial revolution, by revealing how the British used tariffs — notably on French wine — as a mercantilist tool to politically weaken France and to respond to pressure from local brewers and others. The book reveals that Britain did not transform smoothly from a mercantilist state in the eighteenth century to a bastion of free trade in the late nineteenth.


This boldly revisionist account gives the first satisfactory explanation of Britain’s transformation from a minor power to the dominant nation in Europe. It also shows how Britain and France negotiated the critical trade treaty of 1860 that opened wide the European markets in the decades before World War I. Going back to the seventeenth century and examining the peculiar history of Anglo-French military and commercial rivalry, Nye helps us understand why the British drink beer not wine, why the Portuguese sold liquor almost exclusively to Britain, and how liberal, eighteenth-century Britain managed to raise taxes at an unprecedented rate — with government revenues growing five times faster than the gross national product.

War, Wine, and Taxes stands in stark contrast to standard interpretations of the role tariffs played in the economic development of Britain and France, and sheds valuable new light on the joint role of commercial and fiscal policy in the rise of the modern state.

"Nye writes 100 percent pure, uncut nonfiction to get your geek on, putting the myth of three centuries of British trade superiority on trial. Examining the protectionist tariffs the country used against the French, particularly on agriculture and wine imports, War, Wine, and Taxes casts Britain in a less liberal light than most histories. Free trade being one of the hottest topics of our age, Nye's fresh hindsight is timely."—Maggie Dutton, Seattle Weekly

"Conventional wisdom holds that Great Britain was the great free-trade hegemonic power of the 19th century...Nye's fascinating new book aims to undermine the conventional wisdom, and it does so very successfully...Nye presents interesting, well-argued analyses of Britain's trade barriers on French wine and their effect on both the domestic brewing industry and the ability of the British state to raise revenues by taxing beer."—M. Veseth, Choice

"The core substance of the book is a clear, well-argued, methodically executed and explained attempt to rewrite assumptions about the realities rather than the rhetoric of British trade policy and the notion of free trade. There is always something exhilarating about an argument, especially when it is well presented. . . . It is heady stuff, and it has to be said the work makes a very convincing case for abandoning complacent, conventional assumptions. Likewise, the core contribution of the book succeeds very well in raising questions regarding the state, conceptualizations of the state, and ultimately the role of the state."—Nicholas Alexander, Enterprise and Society

"This is a very important work of economic history. . . . If you don't buy this book, it's OK. I'm sure your mother would understand . . . while she sits alone in her kitchen . . . thinking of nothing but your happiness."—Daniel W. Drezner, Daniel W. Drezner blog

"Nye has performed a useful service by providing an accurate portrayal of the true state of the trade policy of the British government, a policy that was often at odds with the free-trade claims of thinkers and politicians."—K. Steven Vincent, European Legacy

"In War, Wine, and Taxes John Nye overturns the widespread belief that Britain promoted the free trade that eventually brought so many benefits in the nineteenth century. Britain, it turns out, was surprisingly protectionist, and the political economy of its tariffs has left a mark on French winemaking and on British pubs that still survives today."—Philip T. Hoffman, author of Growth in a Traditional Society: The French Countryside, 1450-1815

"The humorist Artemus Ward famously said, 'It ain't so much the things we don't know that get us into trouble. It's the things we do know that just ain't so.' Everyone knows that England was the first European nation to move, largely unilaterally, toward a free-trade regime. And everyone also knows that this was the cause of British prosperity and power. The problem is that it just ain't so, as Nye shows in this remarkable book. Using data that have long been available, but that have never been compiled and compared in any systematic manner, Nye meticulously discredits the conventional wisdom. And the history he writes of the economics of trade in beer and wine is a tour de force, well written and with as many strange characters and unexpected twists as a detective novel. It is no exaggeration to say that this is the most controversial, and possibly the most important, book on political economy yet published in the new millennium."—Michael Munger, Duke University

"Nye's arguments are novel and fresh, and they are enunciated with great gusto. He brings to bear a fine intuition and understanding of economic analysis, and he combines his economic history with a deep understanding of political economy and the complex ways in which special interests and ideology jointly affect policy decisions. His analysis of the politics and economics of protectionist legislation is quite compelling, and his handling of the data and ability to see in them something that others have missed are quite impressive."—Joel Mokyr, author of The Gifts of Athena

"Nye provides a new view of British commercial policy and its links to financing war. Historians have long studied politics, war, taxation, and trade. What they have failed to do is see how all these are connected. Nye's strength is suggesting how these stories tie together into a single story. Along the way emerges a wonderful treatment of the industrial organization of beer and wine, particularly why Britain was a nation of beer drinkers and France of wine."—Barry Weingast, Stanford University