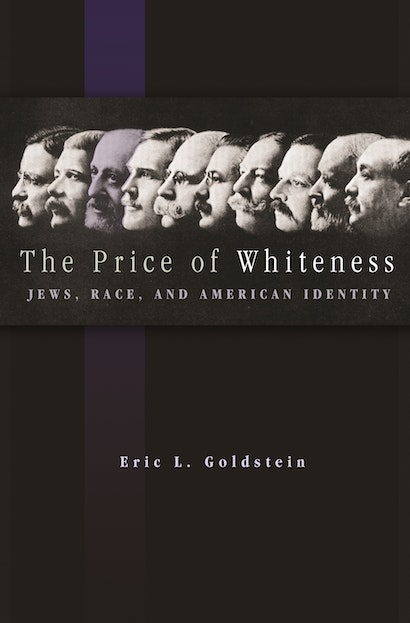 What has it meant to be Jewish in a nation preoccupied with the categories of black and white? The Price of Whiteness documents the uneasy place Jews have held in America’s racial culture since the late nineteenth century. The book traces Jews’ often tumultuous encounter with race from the 1870s through World War II, when they became vested as part of America’s white mainstream and abandoned the practice of describing themselves in racial terms.


American Jewish history is often told as a story of quick and successful adaptation, but Goldstein demonstrates how the process of identifying as white Americans was an ambivalent one, filled with hard choices and conflicting emotions for Jewish immigrants and their children. Jews enjoyed a much greater level of social inclusion than African Americans, but their membership in white America was frequently made contingent on their conformity to prevailing racial mores and on the eradication of their perceived racial distinctiveness. While Jews consistently sought acceptance as whites, their tendency to express their own group bonds through the language of “race” led to deep misgivings about what was required of them.


Today, despite the great success Jews enjoy in the United States, they still struggle with the constraints of America’s black-white dichotomy. The Price of Whiteness concludes that while Jews’ status as white has opened many doors for them, it has also placed limits on their ability to assert themselves as a group apart.

Eric L. Goldstein is associate professor of history and Jewish studies at Emory University. He is also the editor of the quarterly scholarly journal American Jewish History.

"In this original, boldly conceptualized and well-researched inquiry into the complicated intersections of 'race' and Jewish-American identity, Goldstein explores how Jewish immigrants gradually began to understand themselves as 'white' (i.e., fully European) when most of America did not."—Publishers Weekly

"A palimpsest layering institutional, communal, literary, religious, and visual materials, Goldstein's study moves deftly and amusingly through periods and across cultural domains to show how the Jews came to describe themselves. . . . Goldstein's presentation of a century and a half of Jewish 'negotiation' of whiteness is fascinating chapter by chapter, and deft in communicating the bewildering diversity and reactivity of Jewish relationships to the black community."—Elisa New, New Republic

"More than any other historian to date, Goldstein . . . shows the changing ways in which Jewish Americans themselves argued either for their own racial particularity, or for their inclusions as whites, or for both."—David Roediger, Chronicle of Higher Education

"Eric Goldstein demonstrates in this intriguing and insightful study [that] it would be much too short-sighted to regard race solely as a problematic concept imposed on American Jews in order to marginalize them."—Tobias Brinkmann, Journal of Modern Jewish Studies

"Eric L. Goldstein has written a penetrating and illuminating account of US Jews' entanglement with 'race' from the last third of the 19th century to the present. . . . [T]his is a thought-provoking text that deserves a wide readership."—Choice

"This is a field well-trodden in recent years, but Eric L. Goldstein adds both earnest research and close interpretation to the inherently limitless question of Jewish-American 'identity.'"—American Historical Review

"Eric L. Goldstein's book should be among the very first stops for those wishing to approach the subject of Jews and race in America.... It is broad, well researched, compellingly told, extraordinarily nuanced, and it comes as a kind of savior to an area of scholarship that has suffered from large gaps regarding basic historical fact."—Michael Alexander, American Jewish History

"Eric Goldstein, an American historian, has written a fascinating, meticulously documented book that . . . shows that American Jews' definition of the Jewish collectivity, for themselves as well as for others, has undergone significant change over the past two centuries, to a large extent reflecting their varying sense of security in American society."—Chaim I. Waxman, Jewish Political Studies Review

"Goldstein's The Price of Whiteness is a valuable addition to the study of the American Jewish community in the twentieth century. . . . Even though Jews are likely to remain ambivalent on what is a Jew, Goldstein's book has provided much solid research, thoughtful reflection, and added insight on this question. The book is recommended without hesitation or reservation."—Saul Lerner, Shofar

"The Price of Whiteness is technically solid, with insightful writing and organization. . . . The Price of Whiteness is even more relevant than Goldstein is willing to claim. This is a highly readable, well-researched, and equitable examination of one of the most interesting topics in American Jewish history and a book worthy of consideration for course adoption in this field."—Glen Anthony Harris, American Jewish Archives Journal

"This is an outstanding book. It offers scholars and general readers a complicated, nuanced, and sophisticated engagement with [the] issue."—Hasia R. Diner, New York University

"Provocative and sure to spark discussion, this book will interest students of both American and Jewish history. It is a valuable contribution to scholarship in the field."—Deborah Dash Moore, University of Michigan