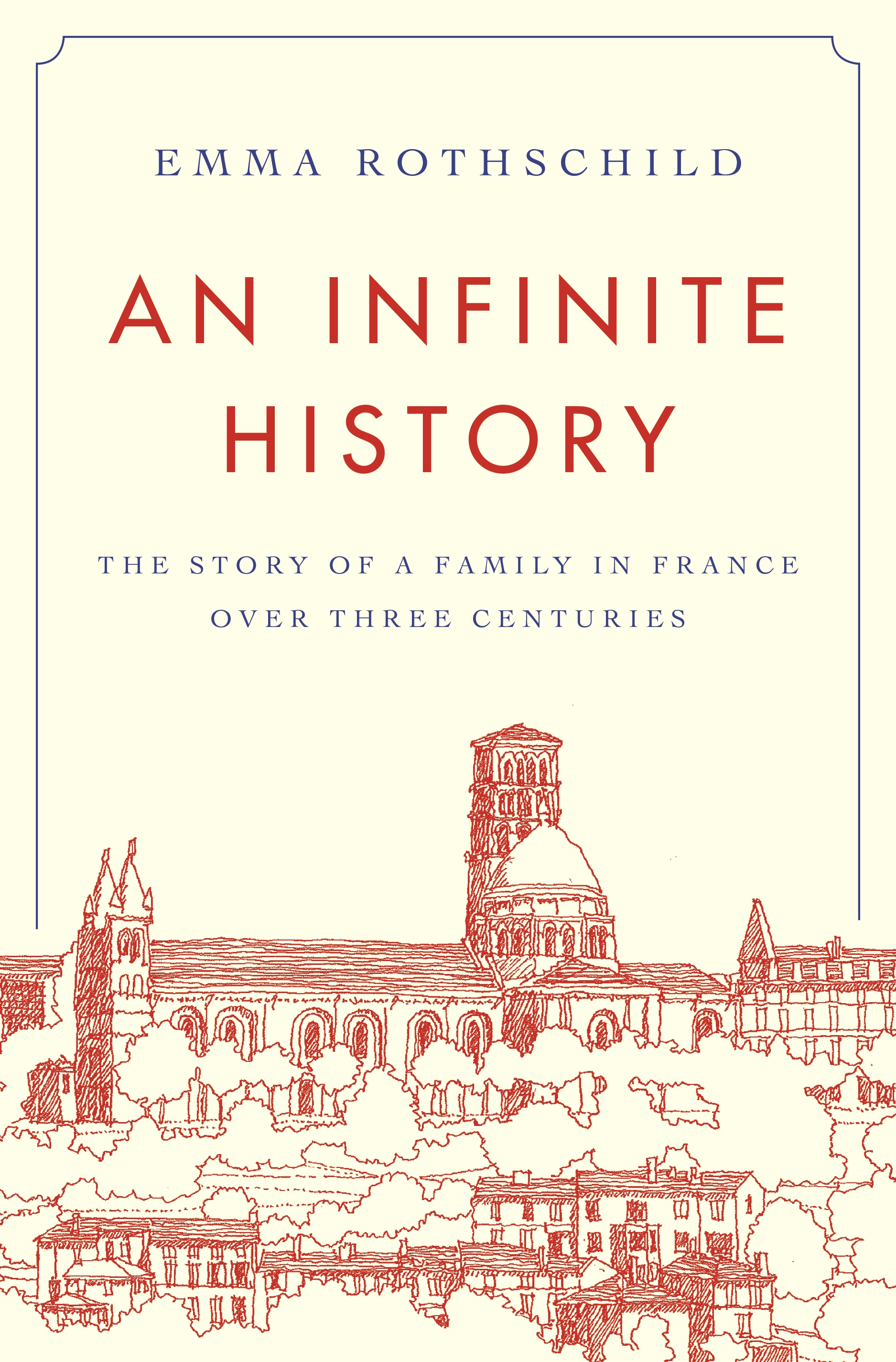 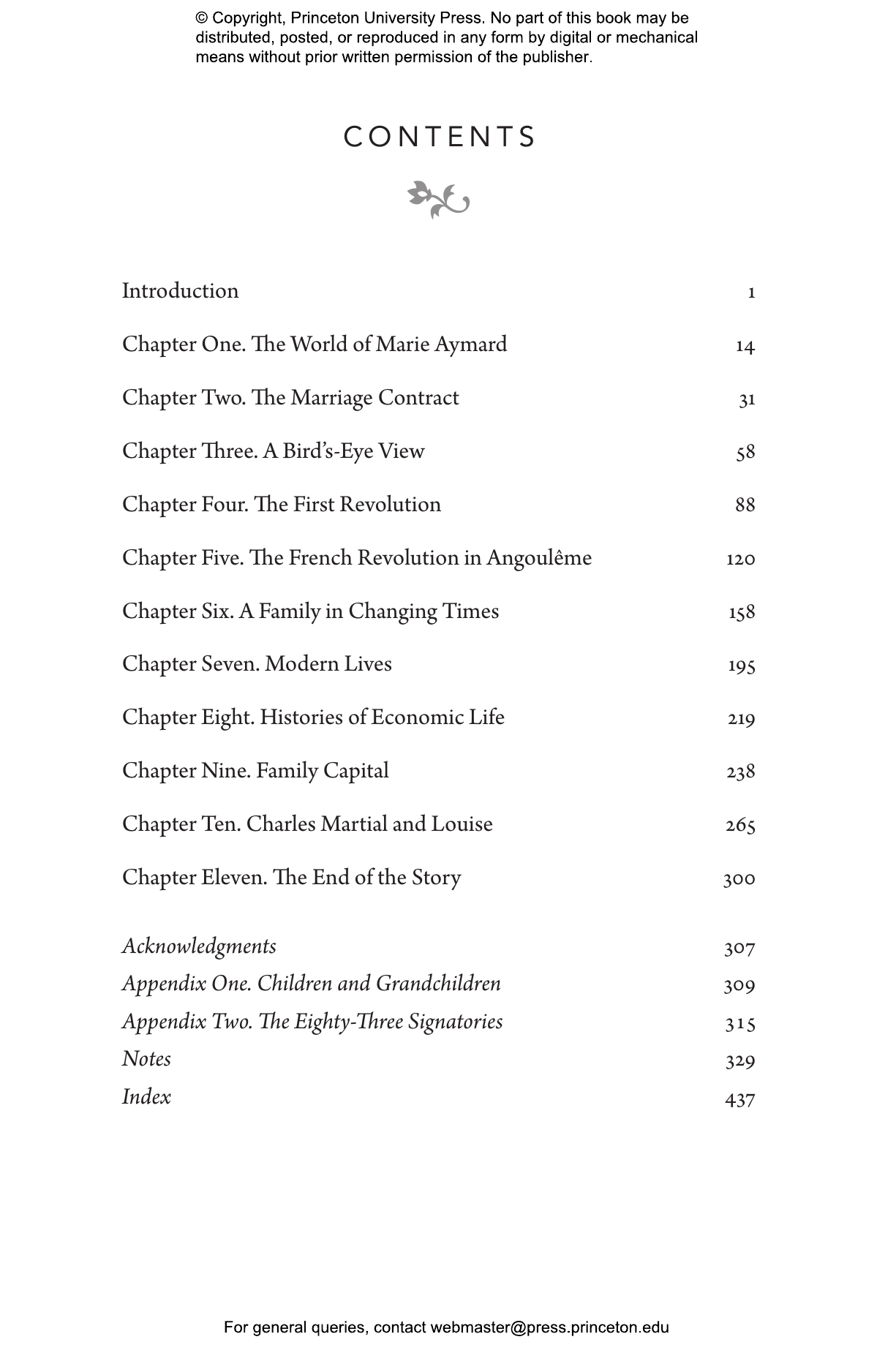 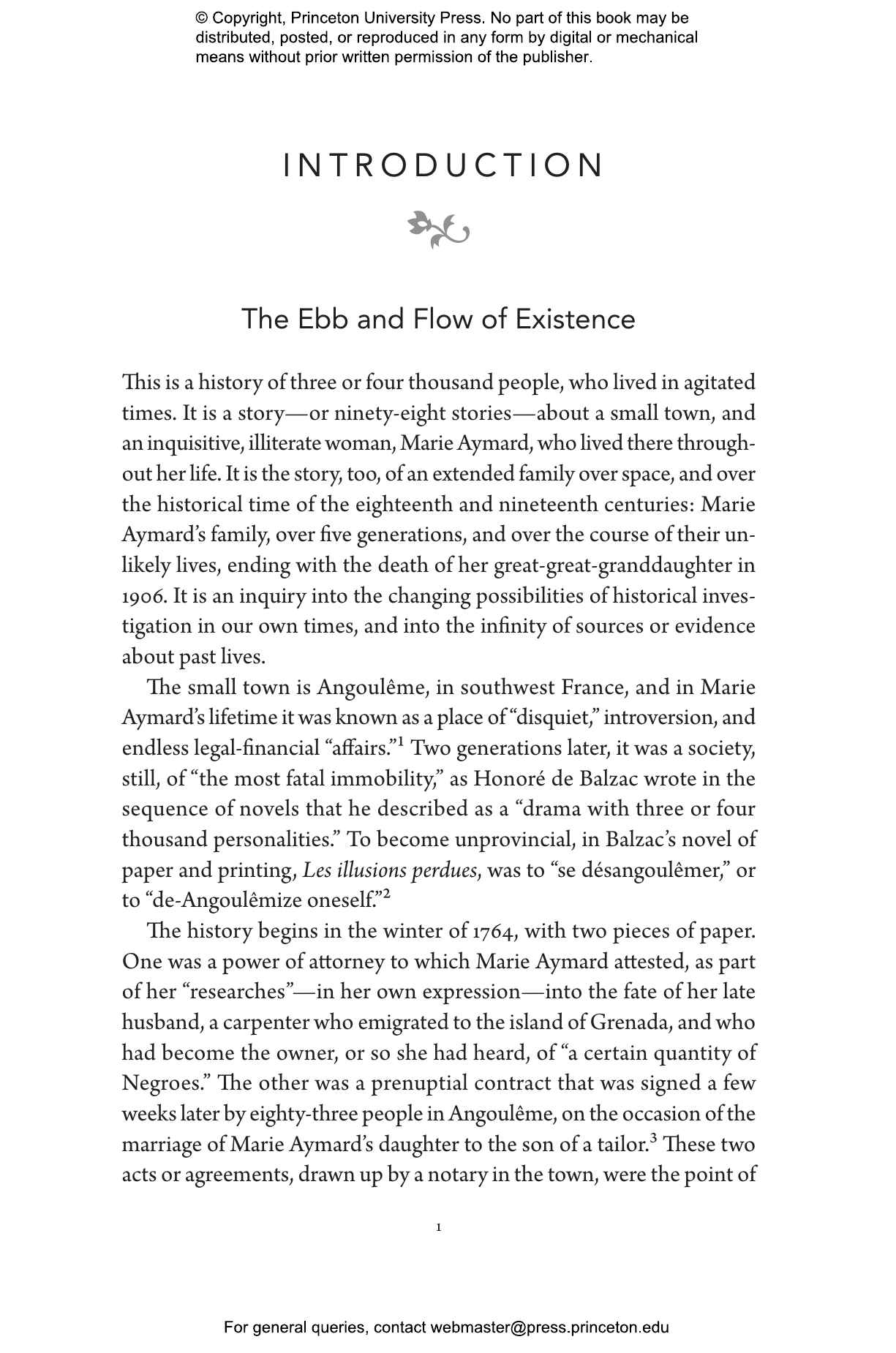 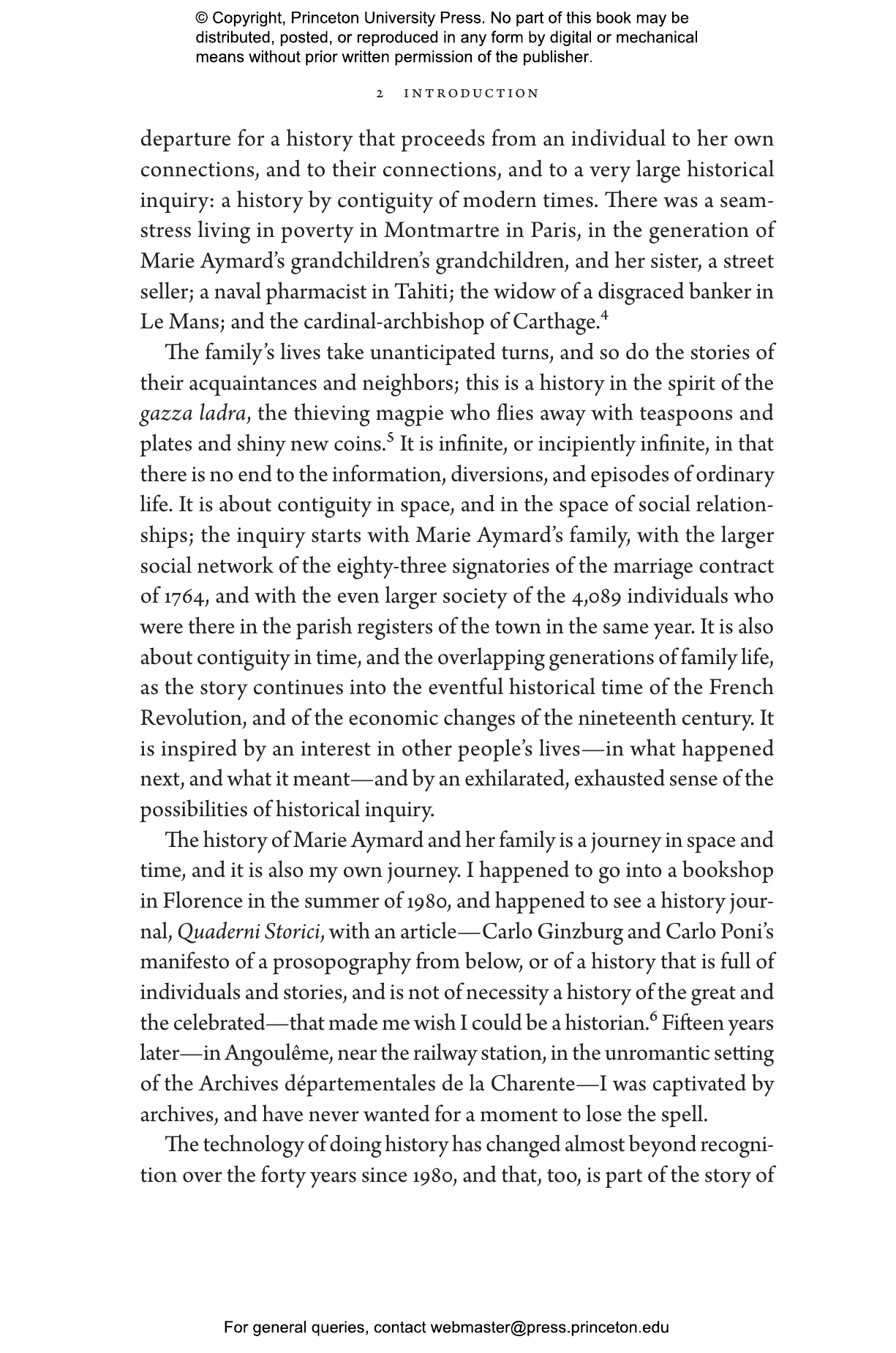 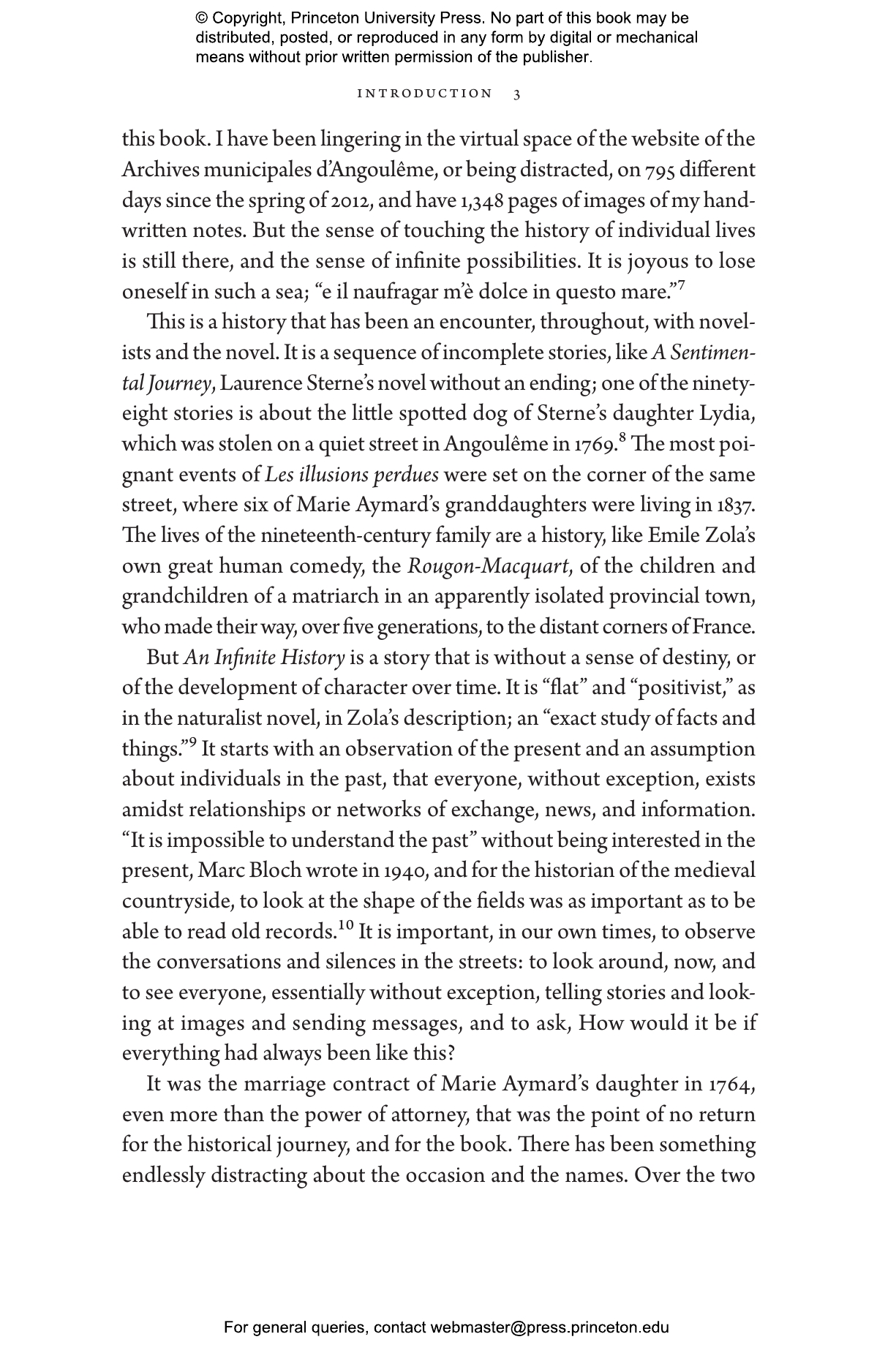 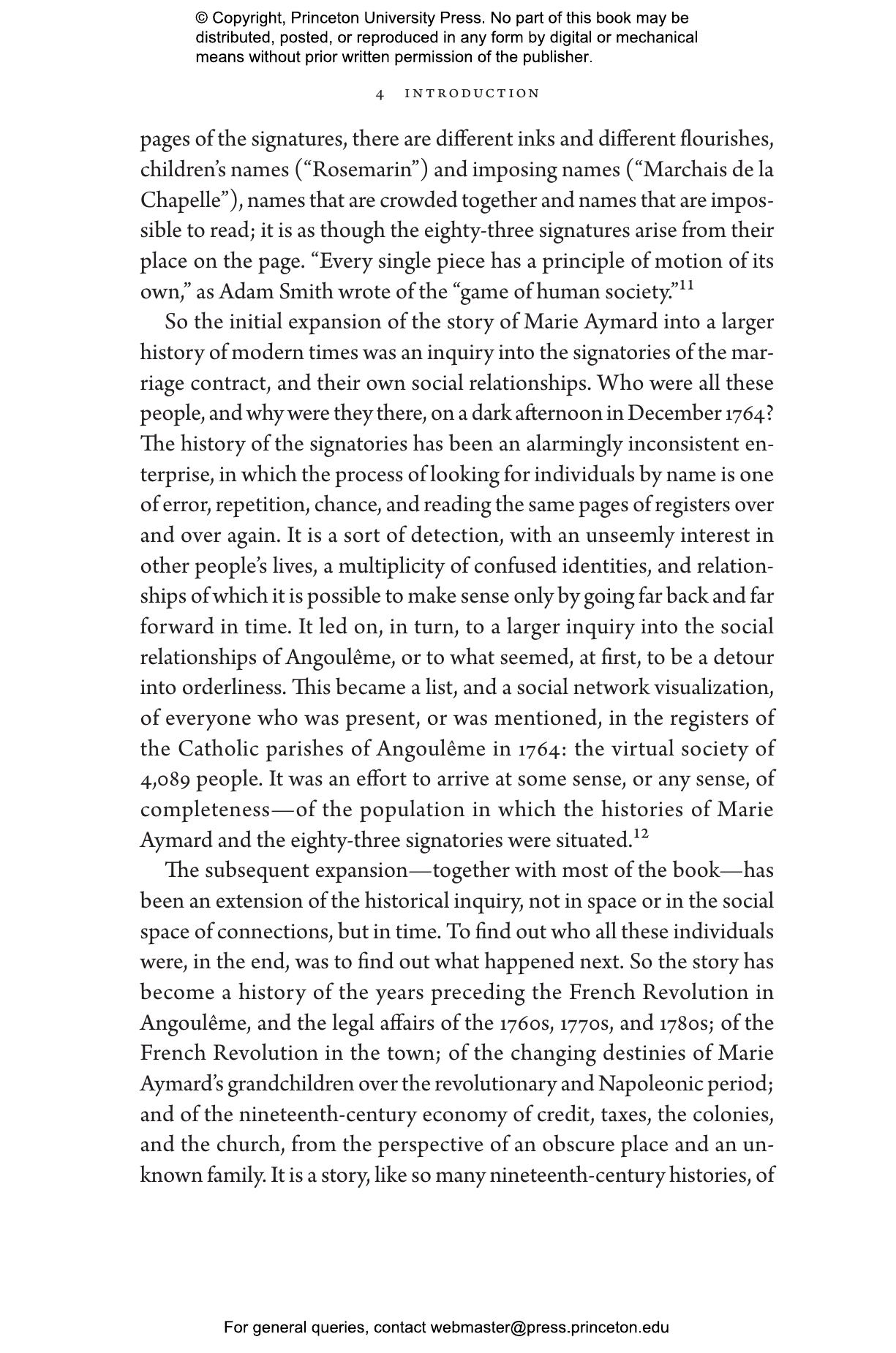 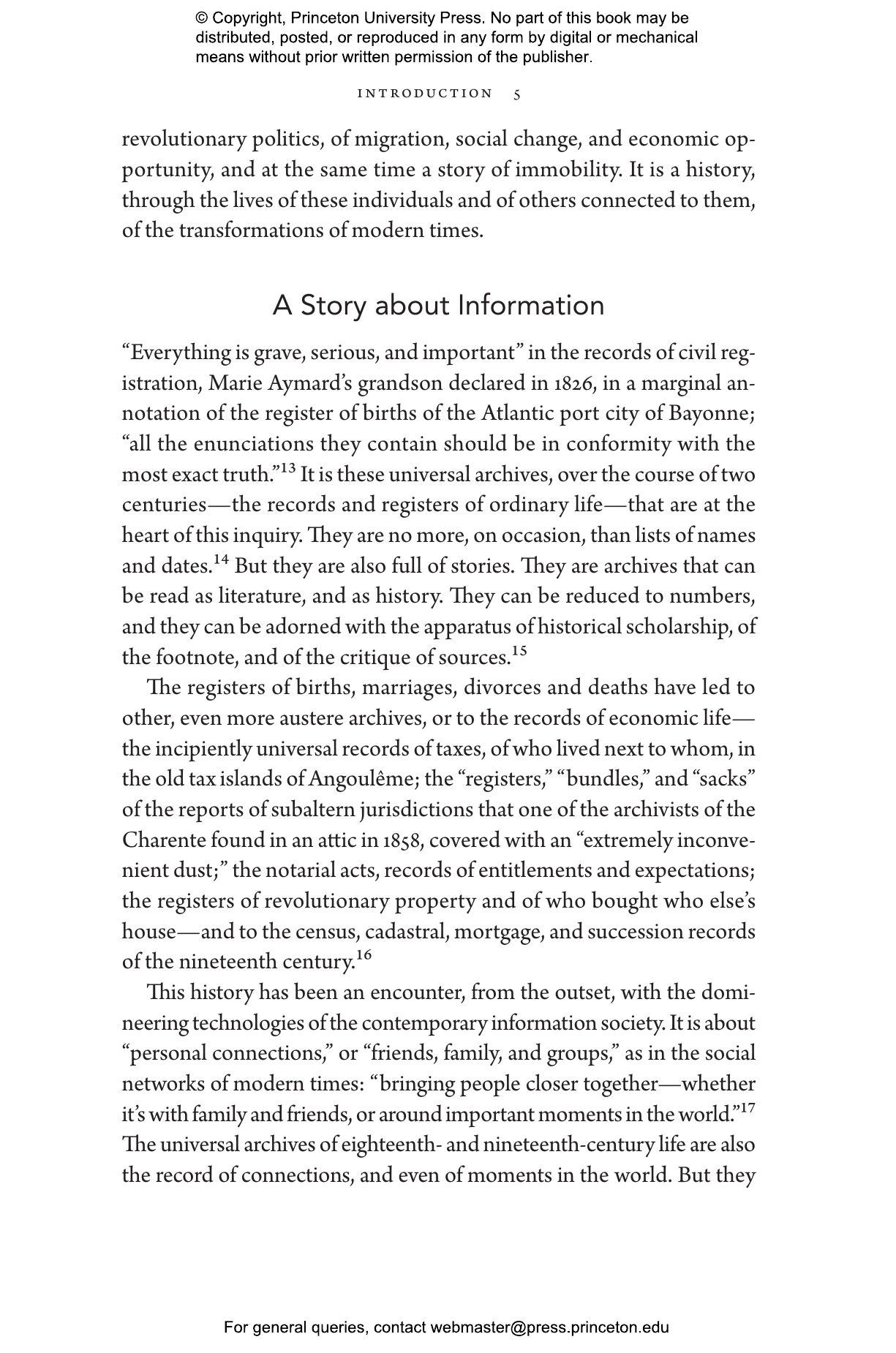 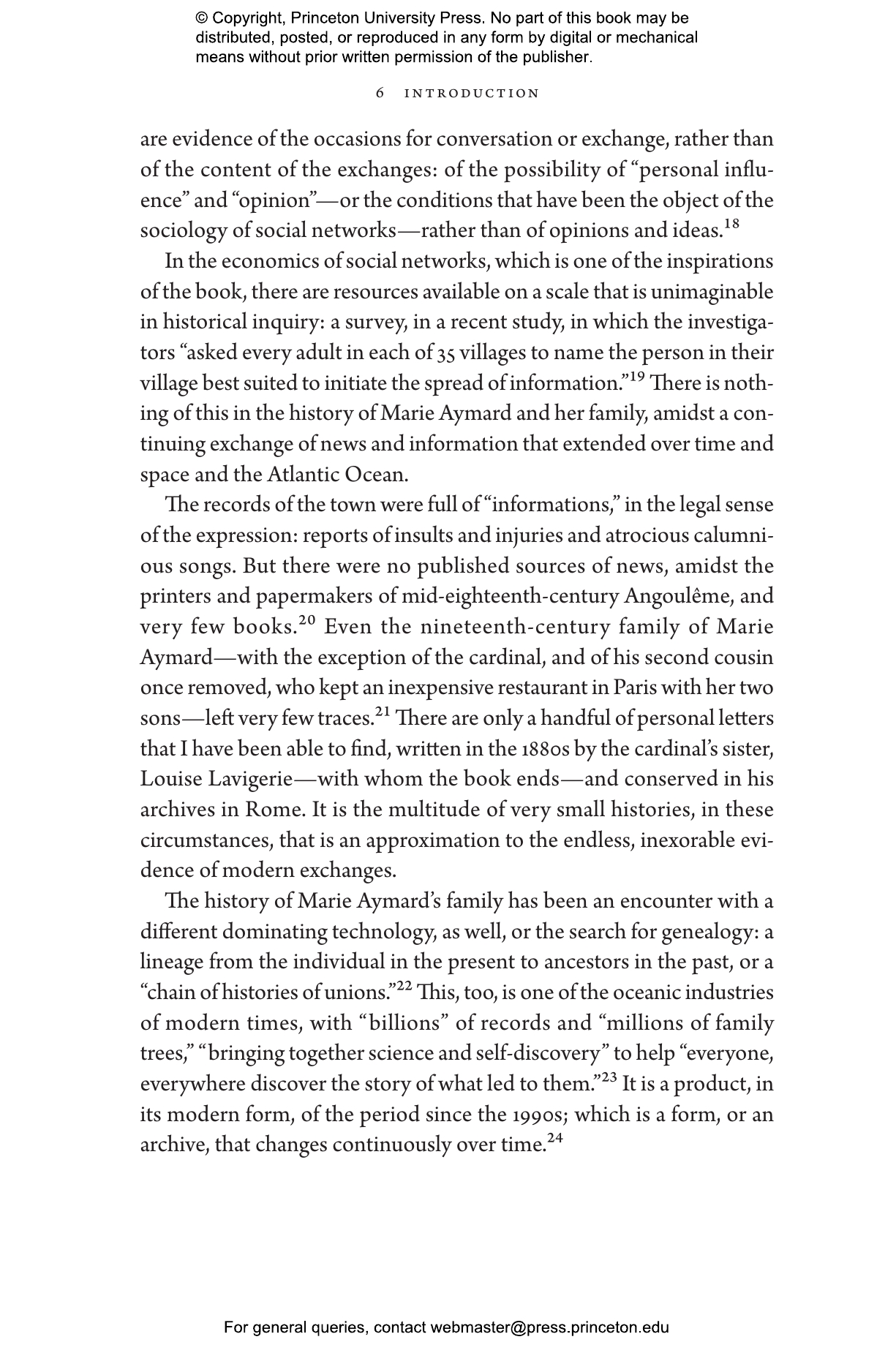 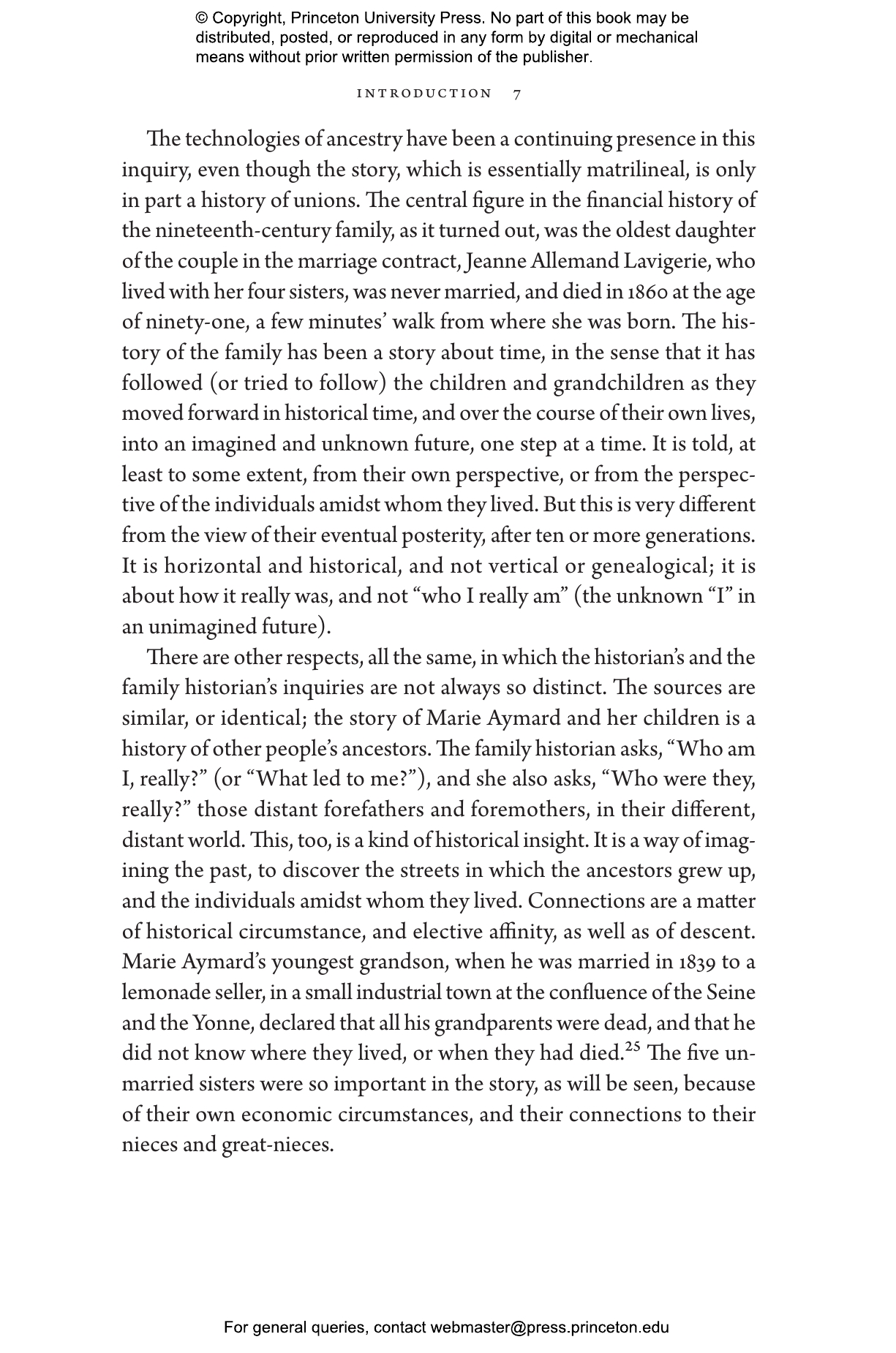 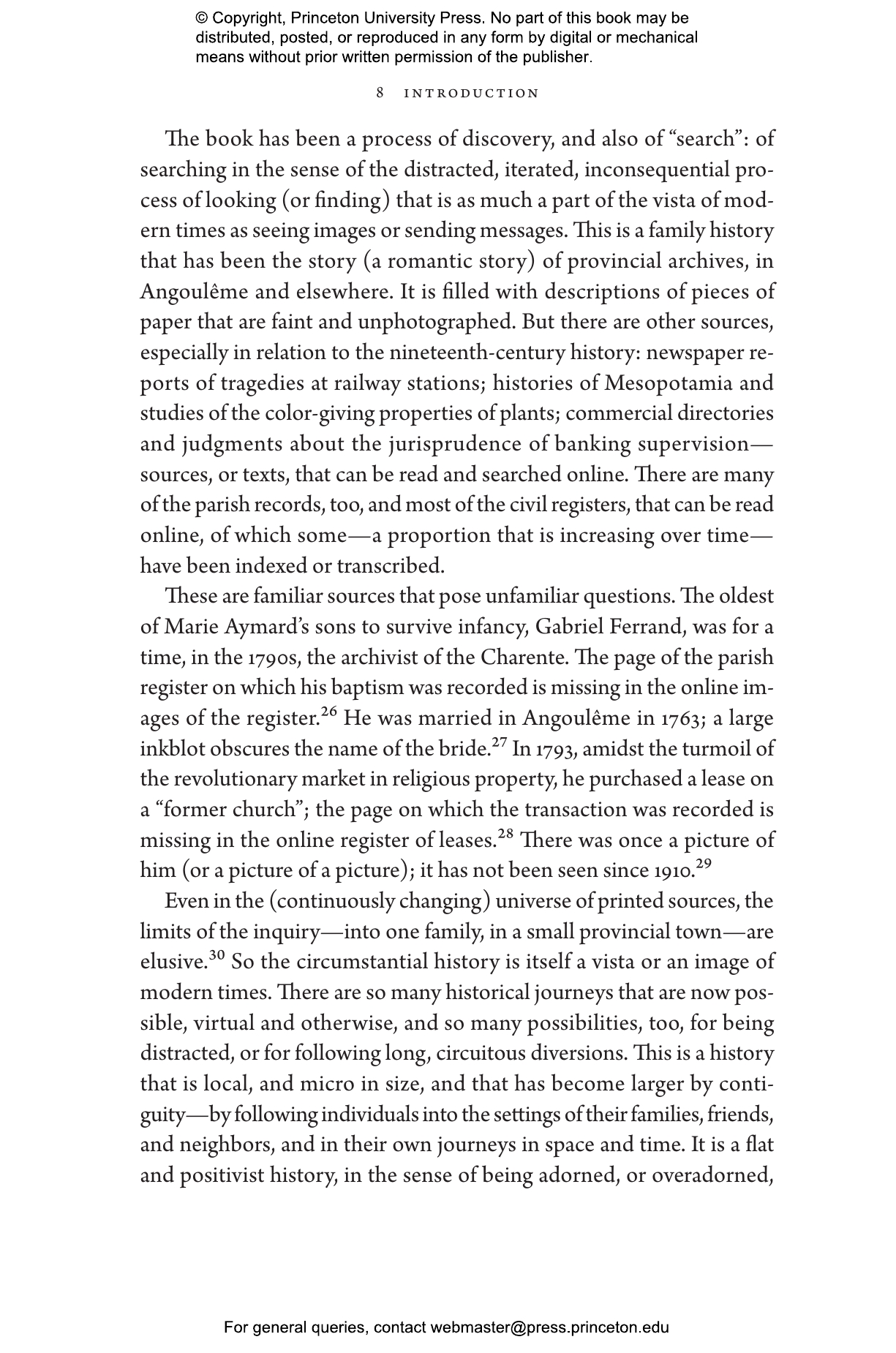 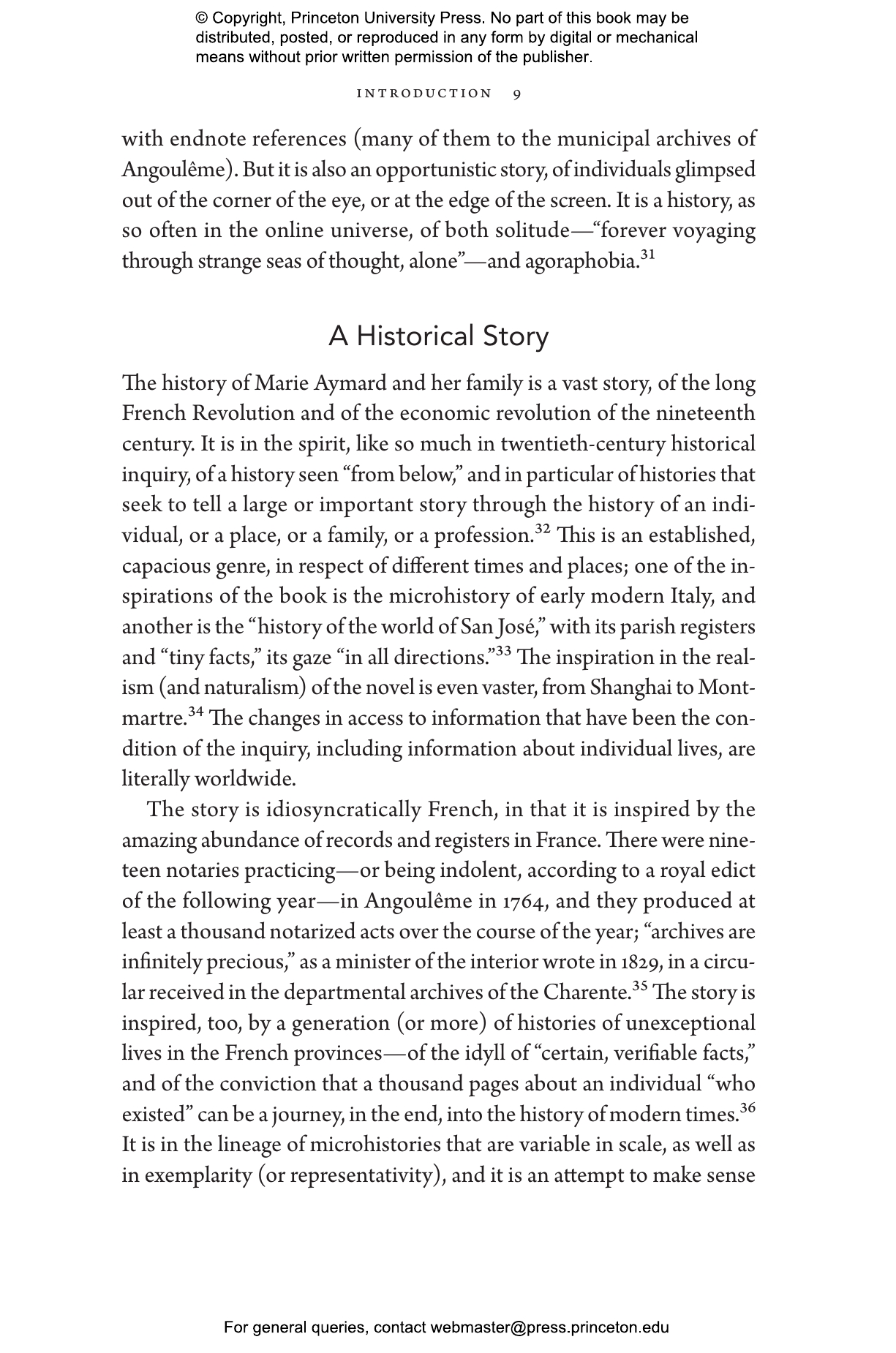 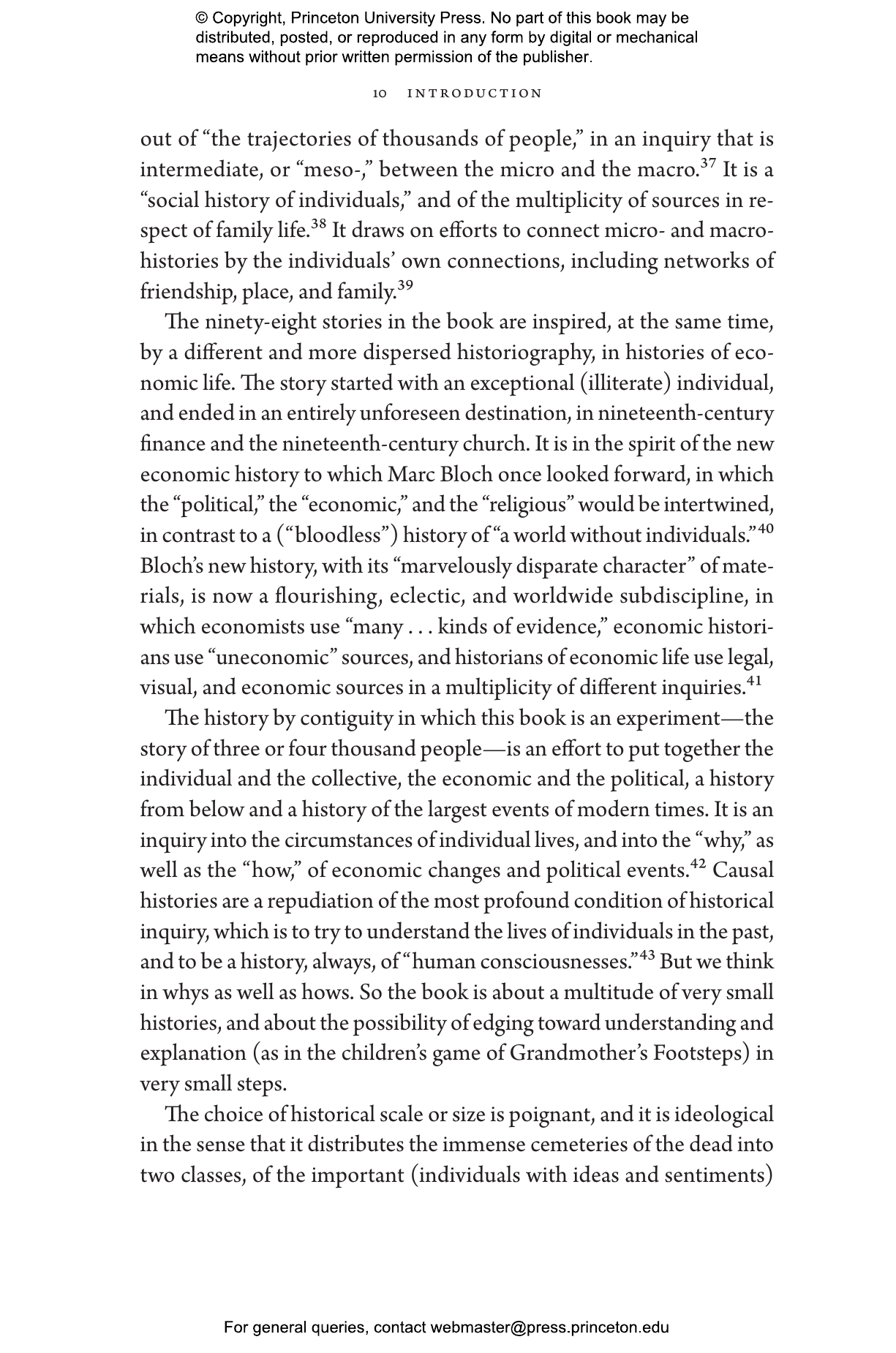 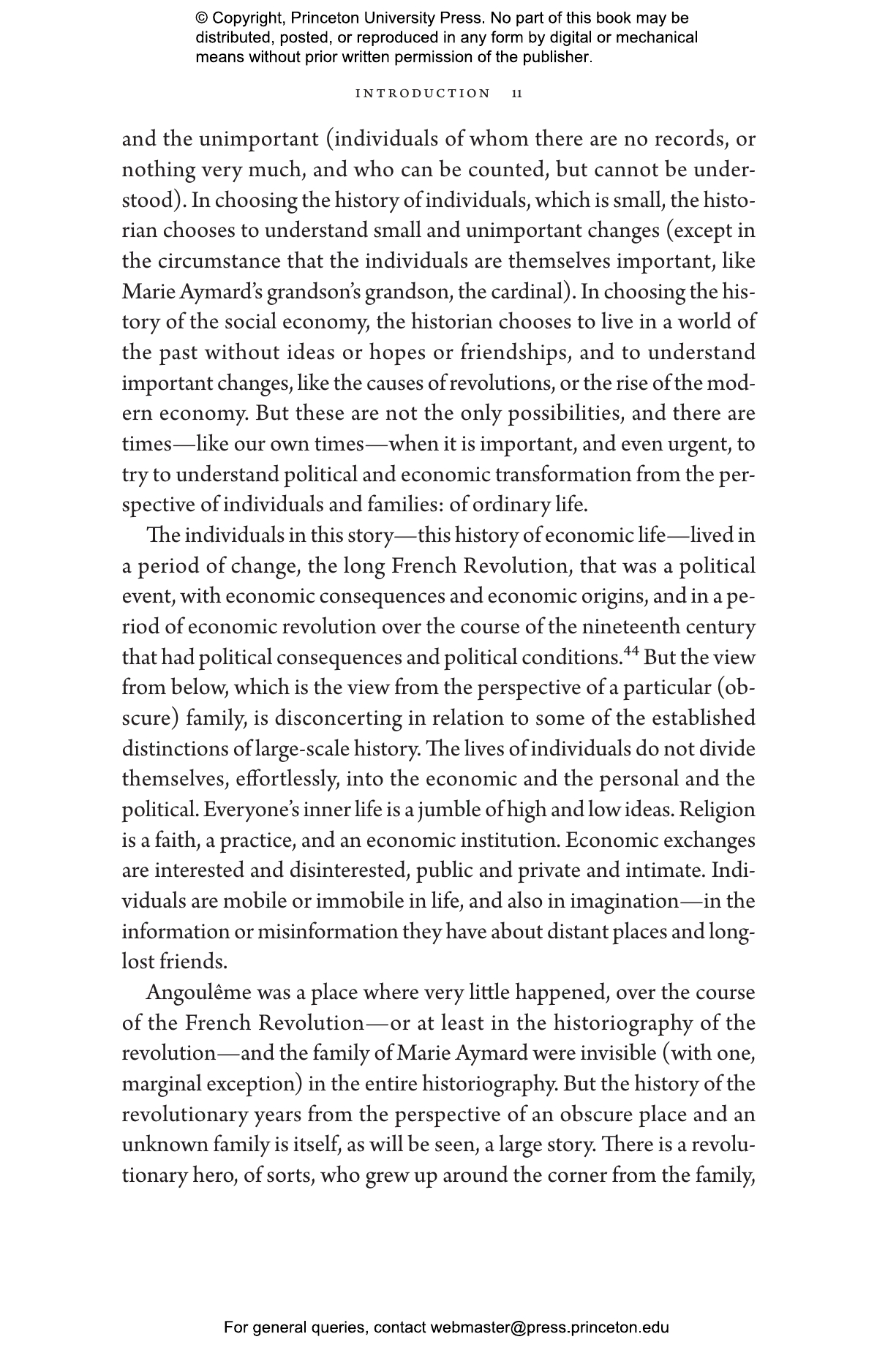 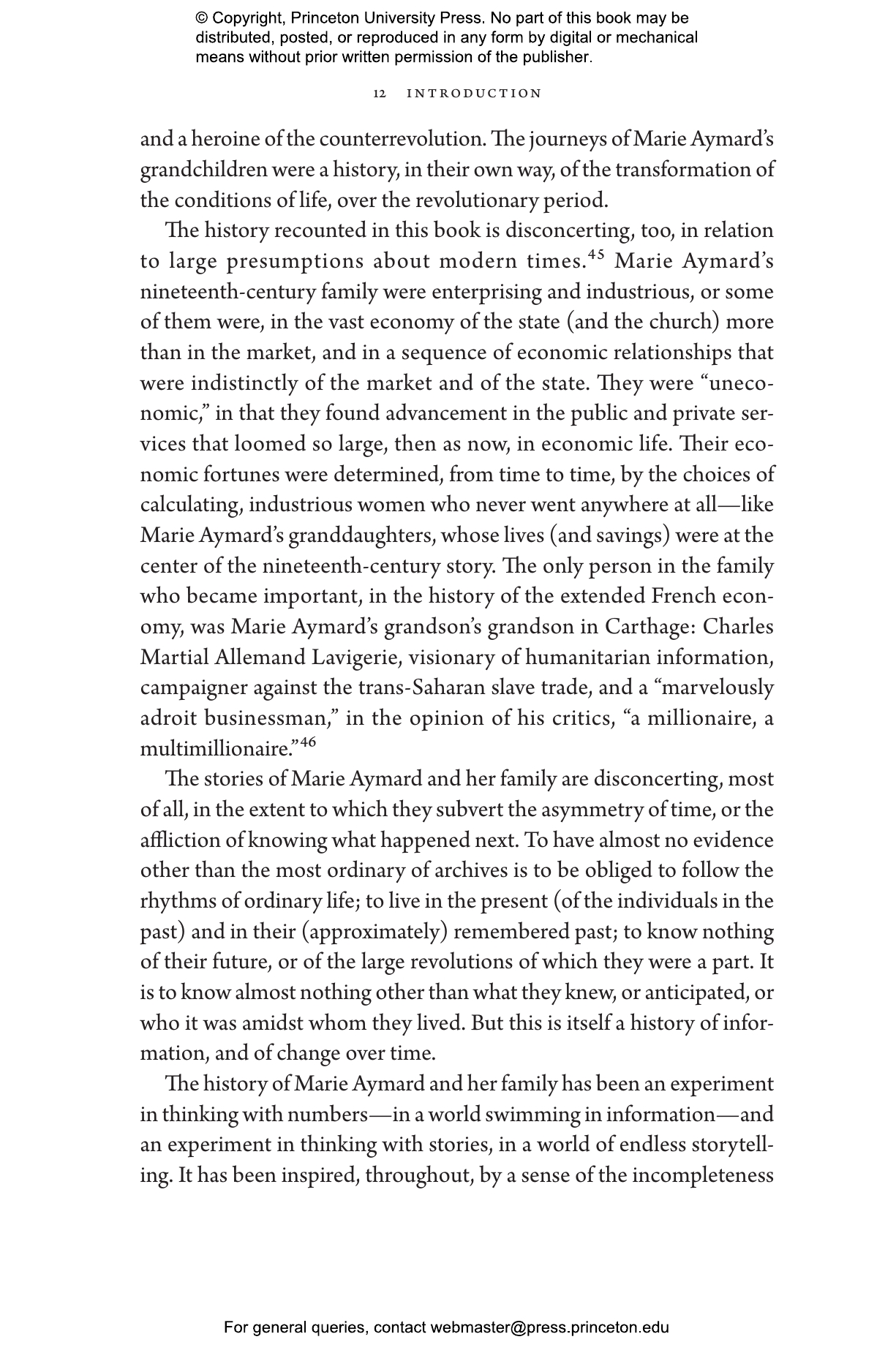 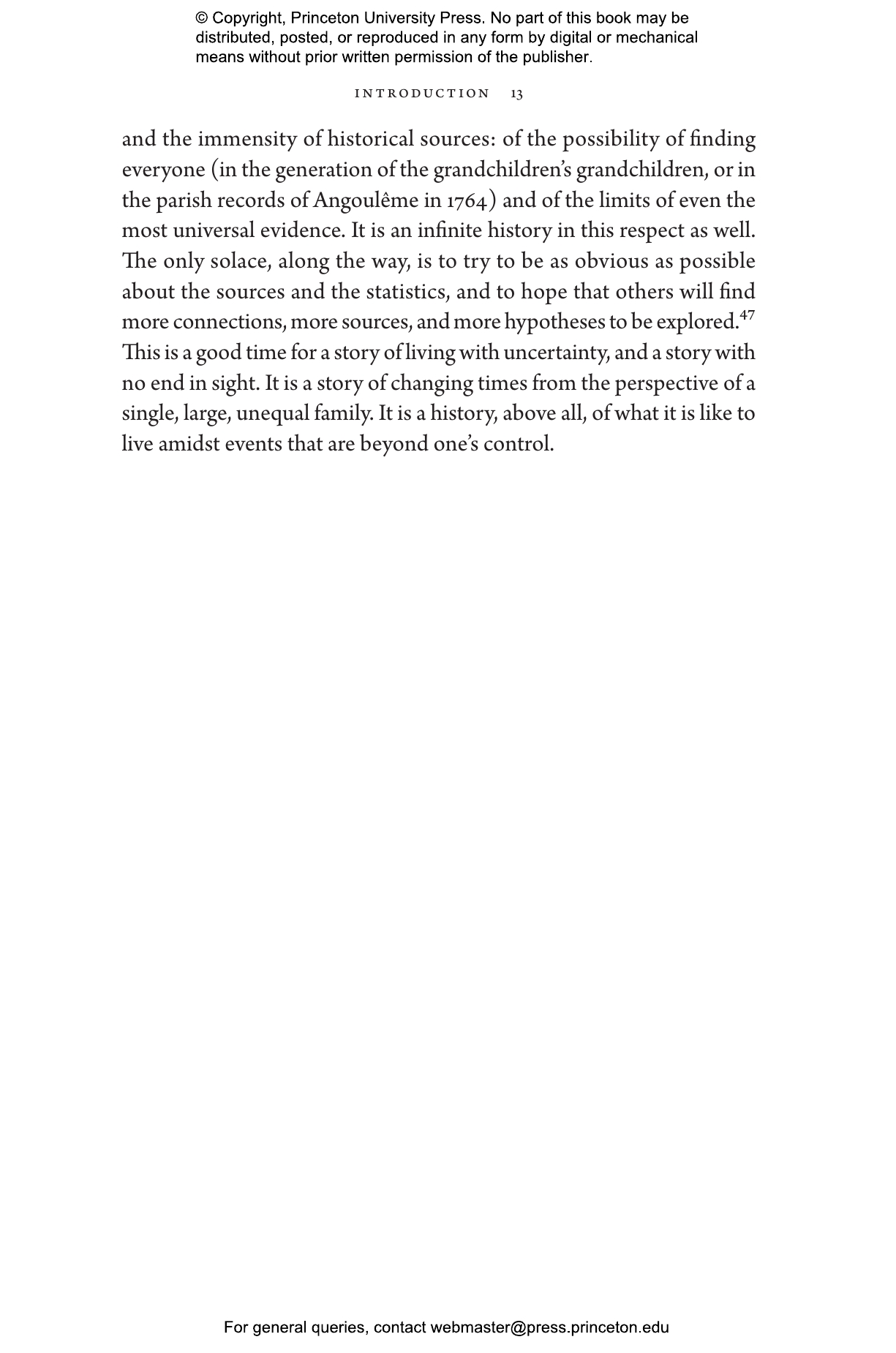 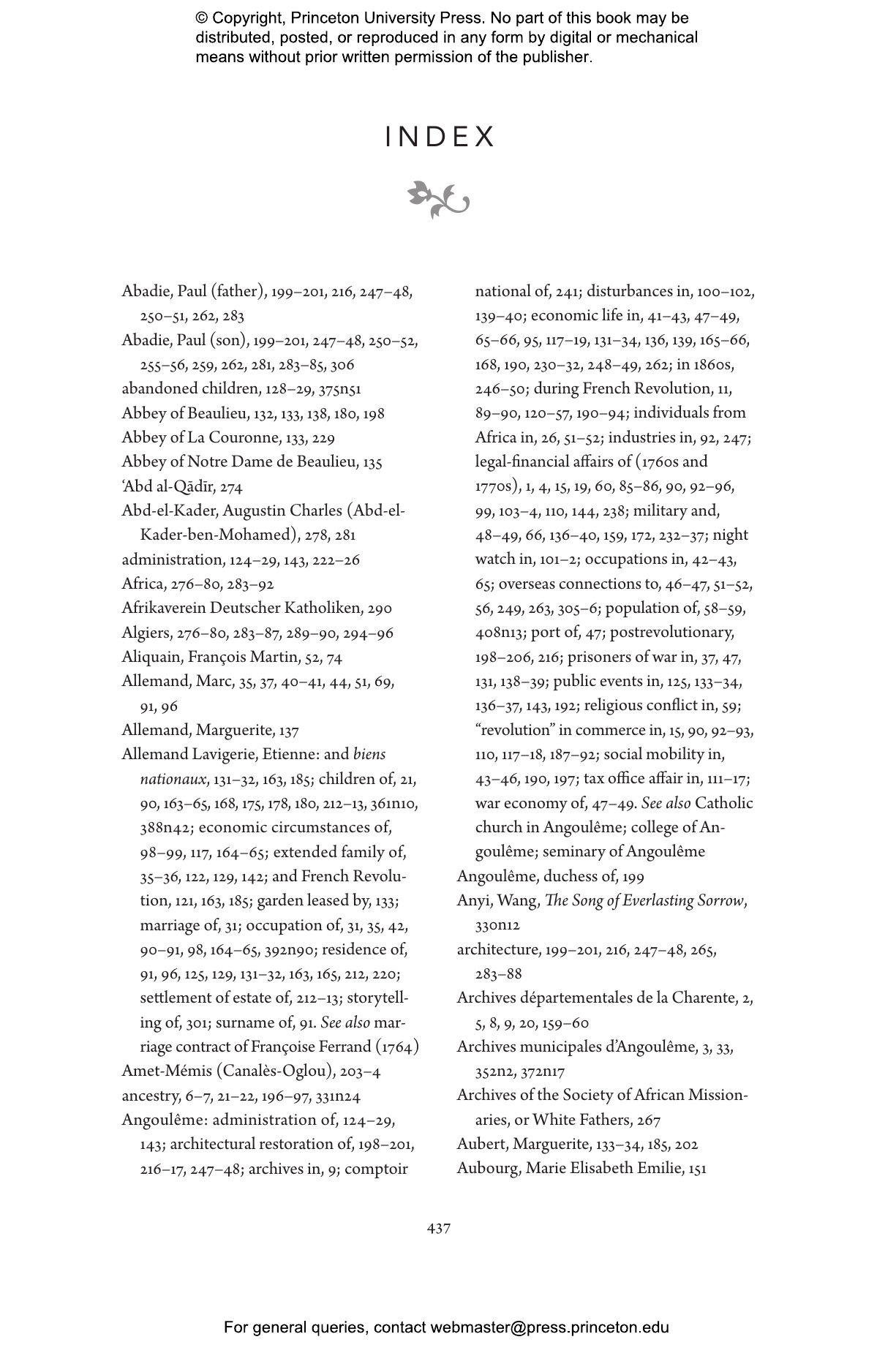 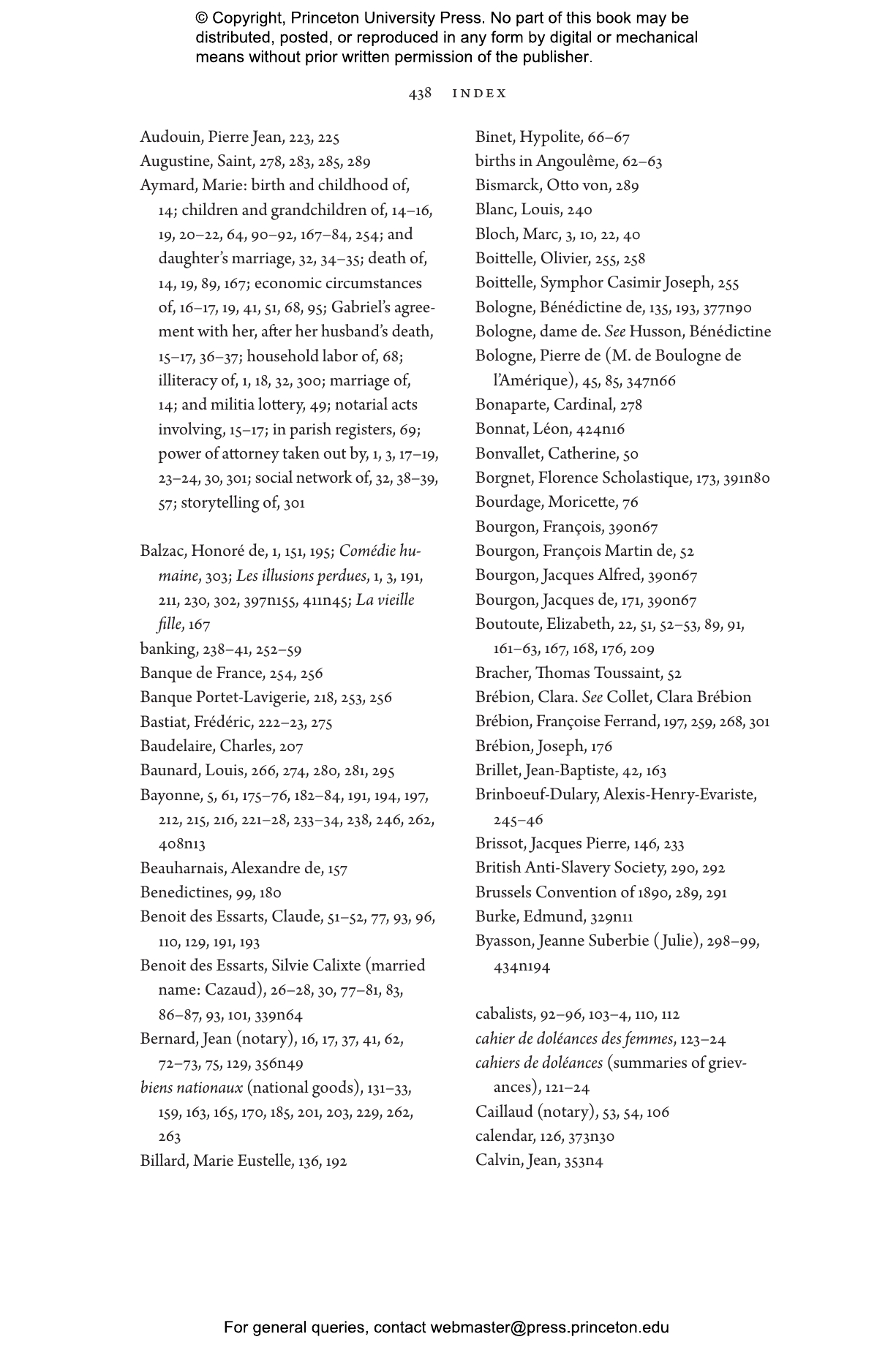 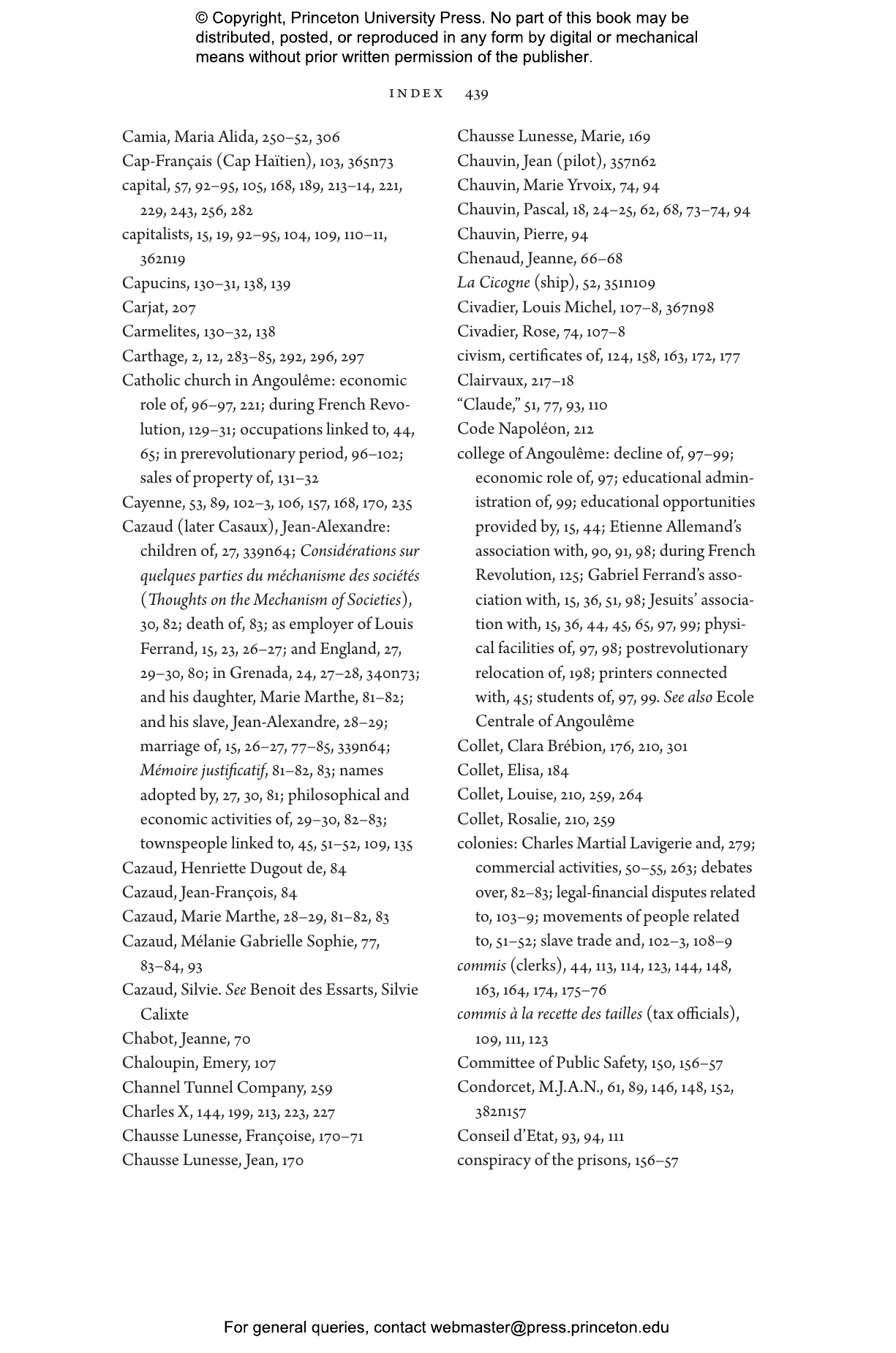 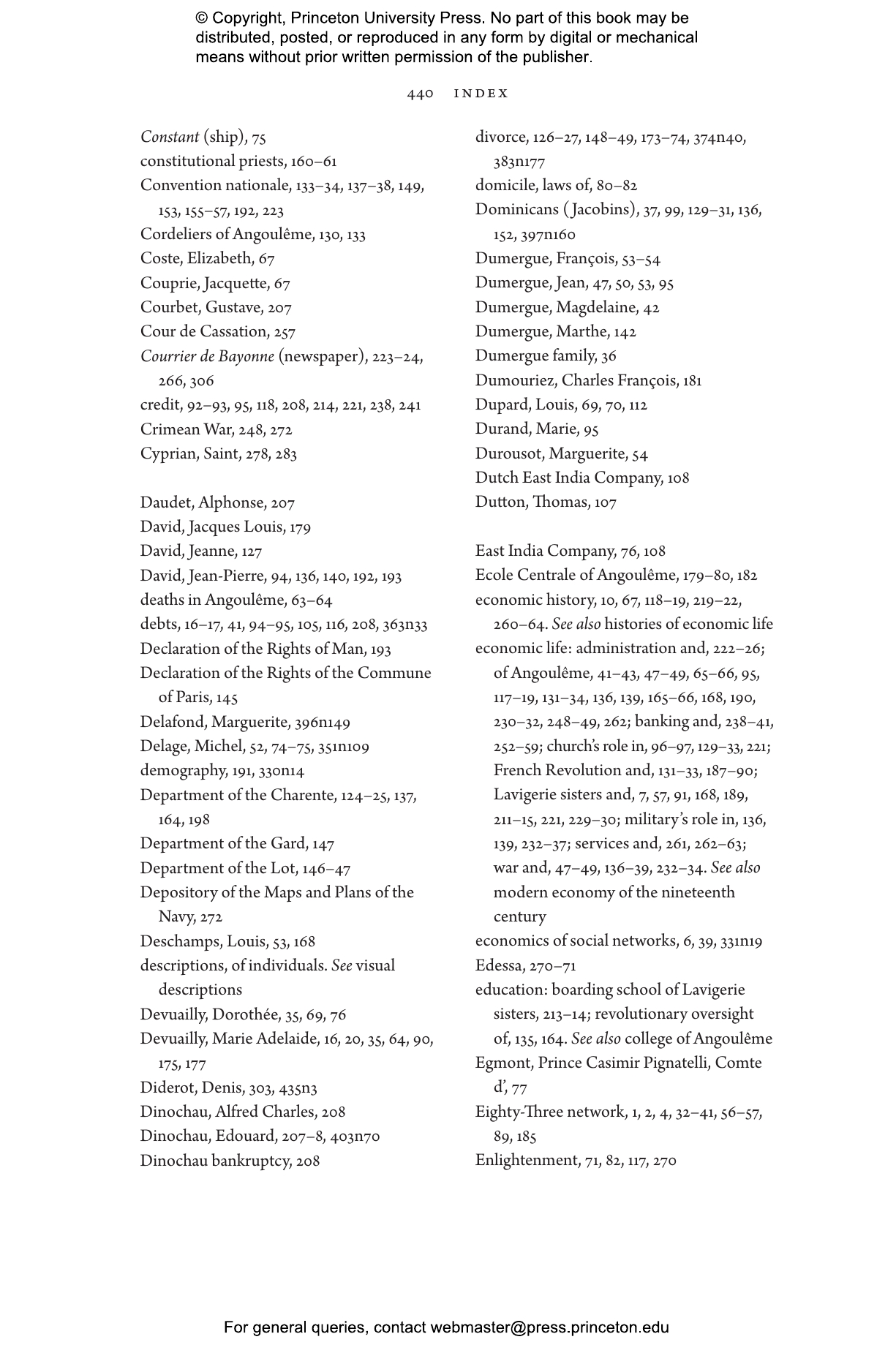 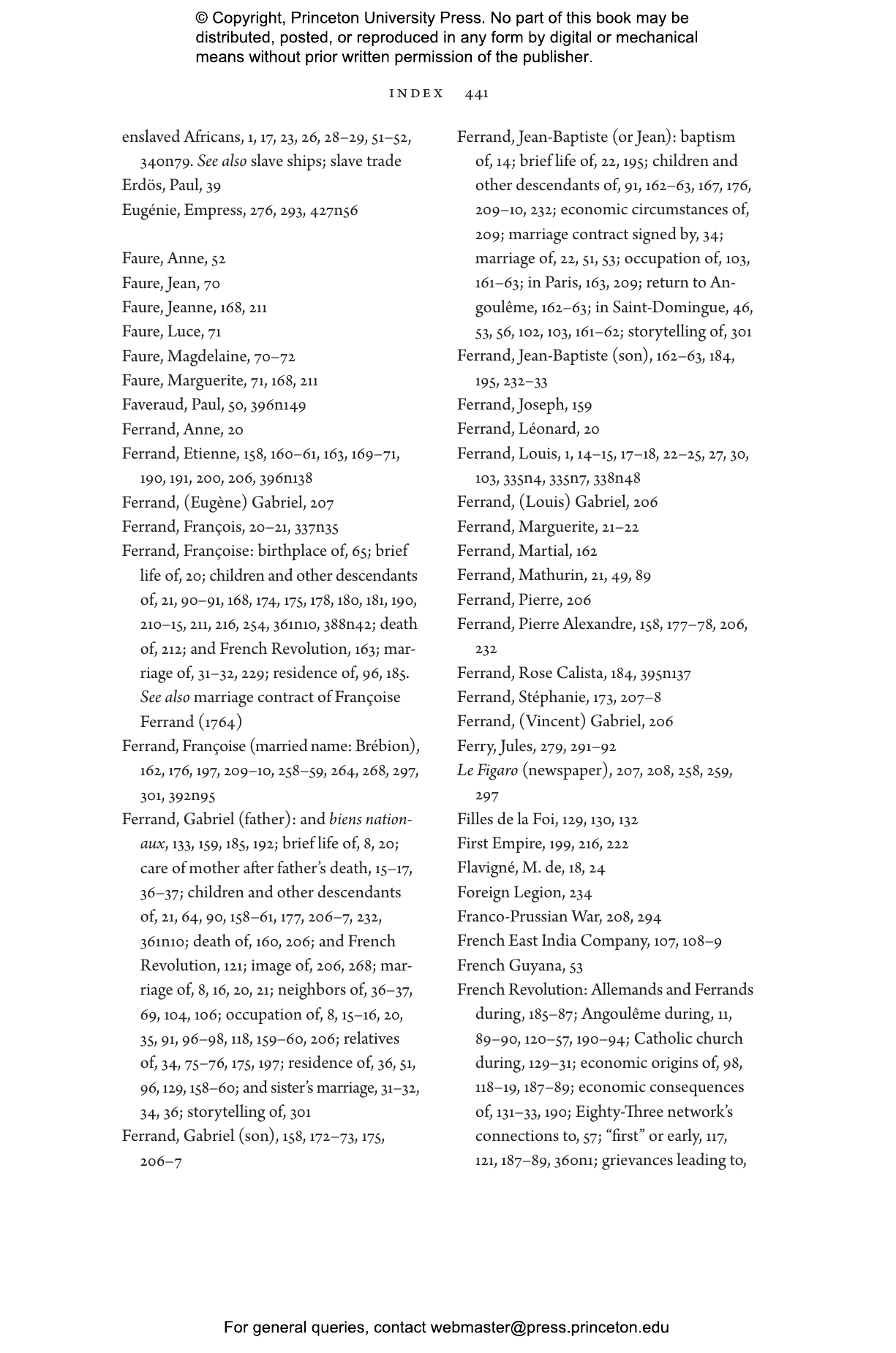 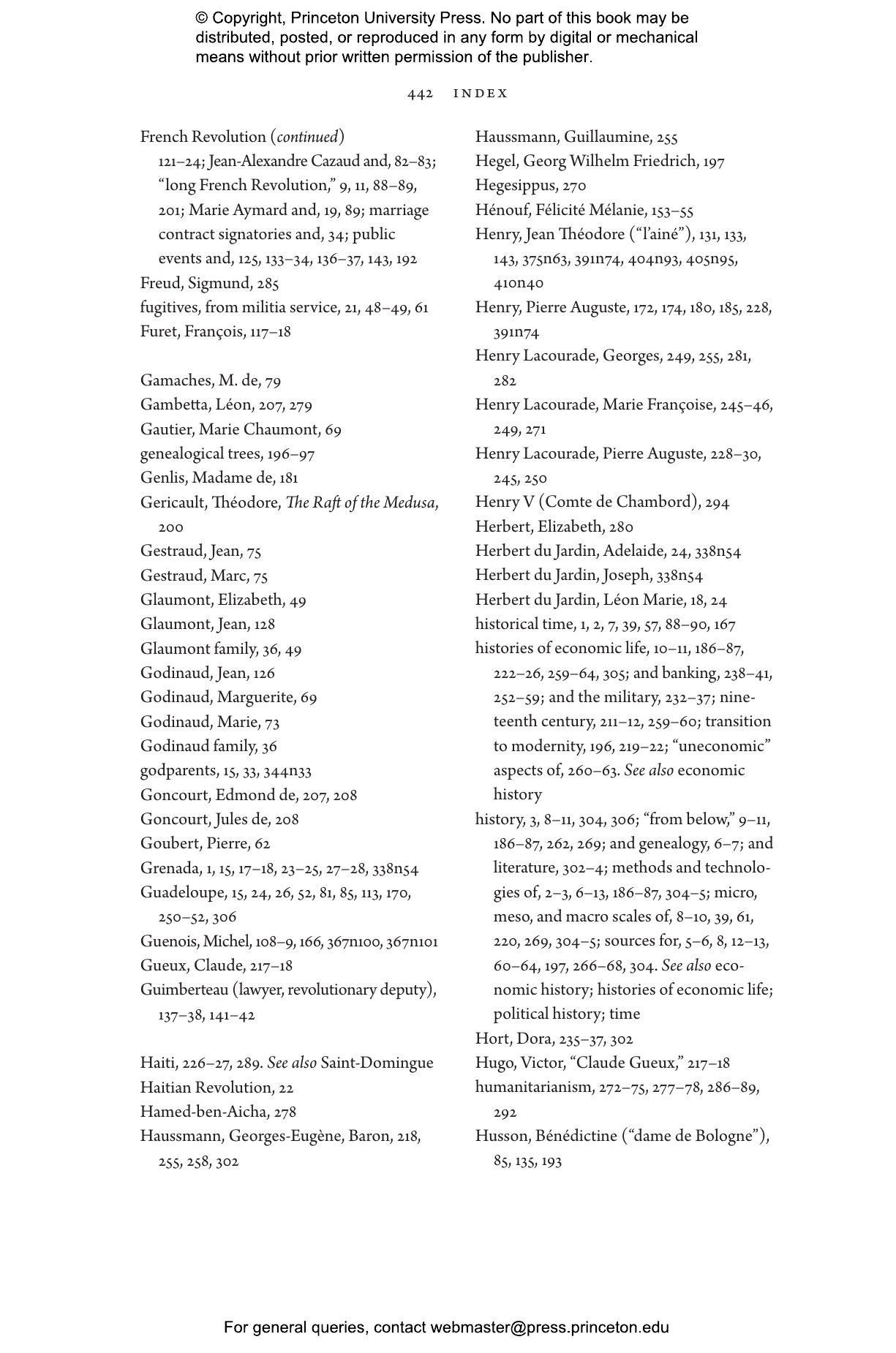 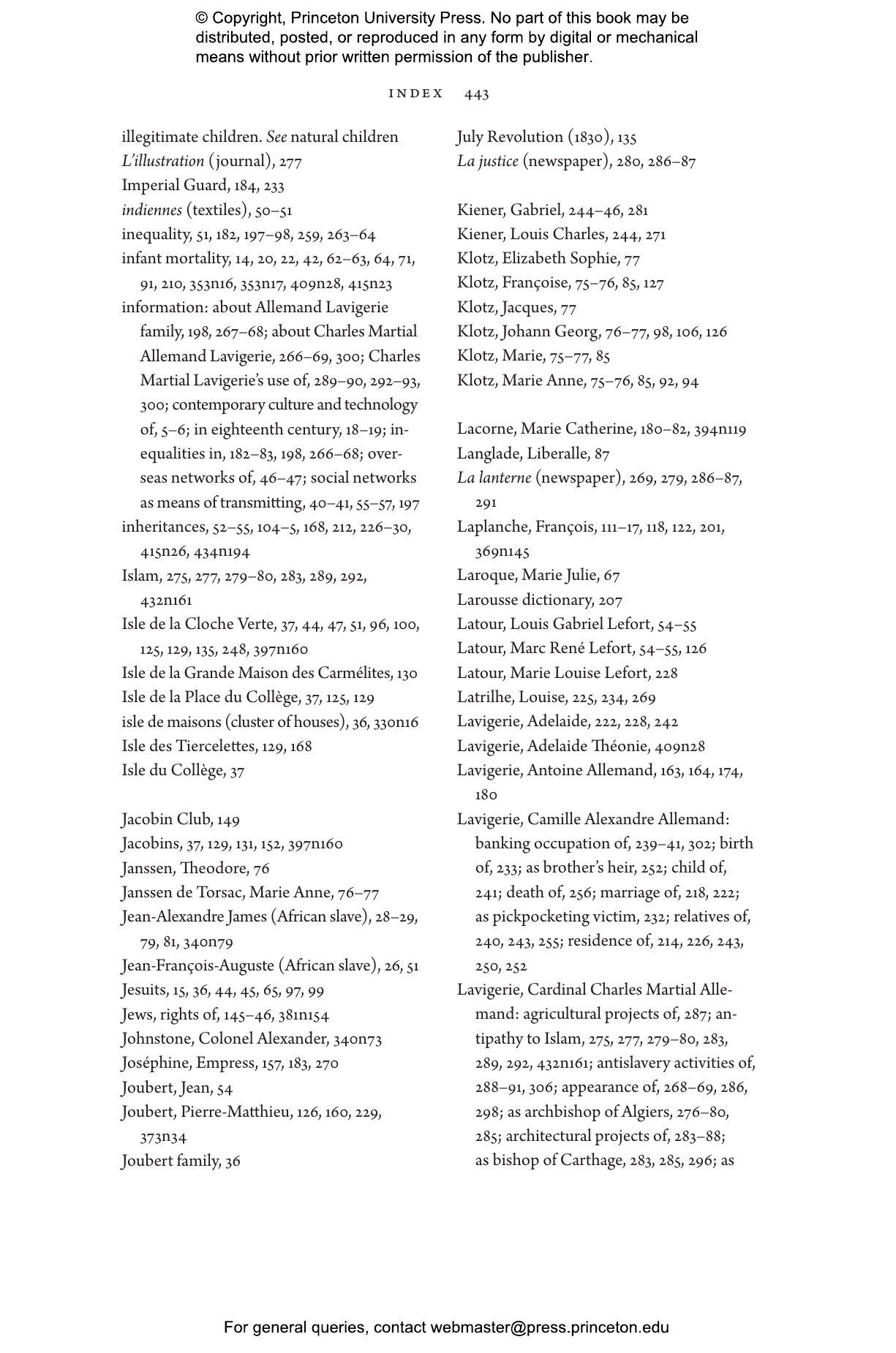 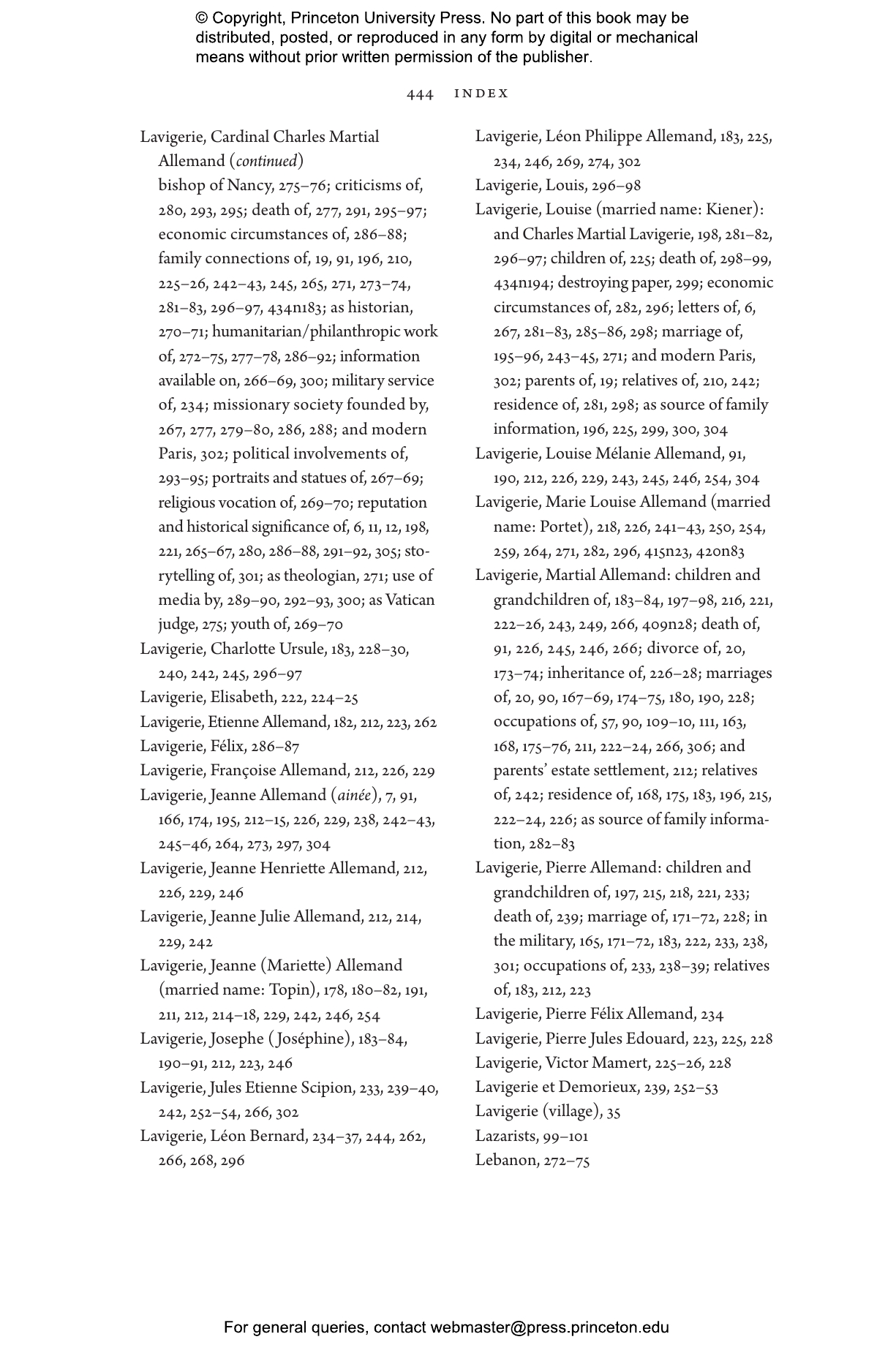 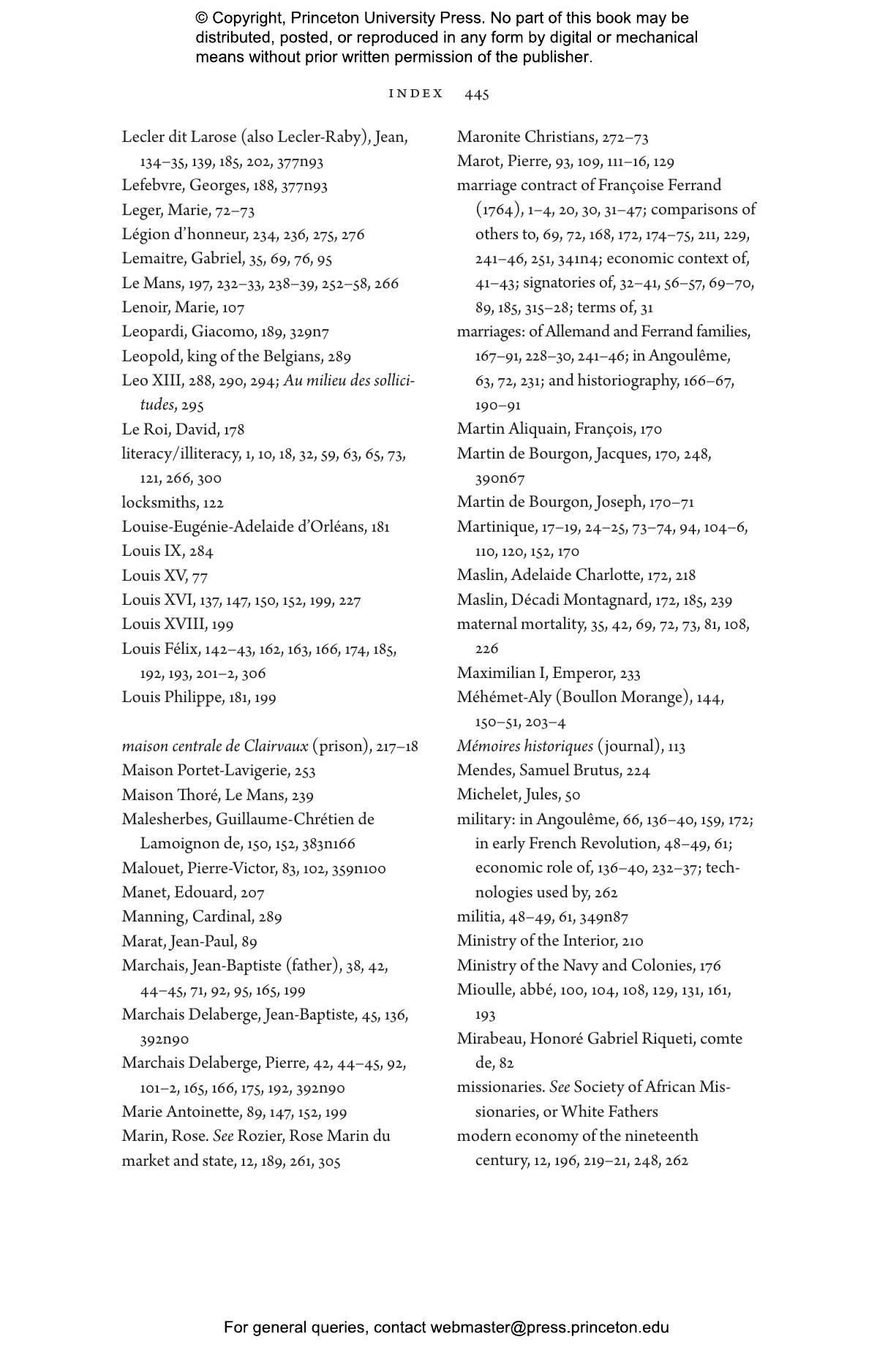 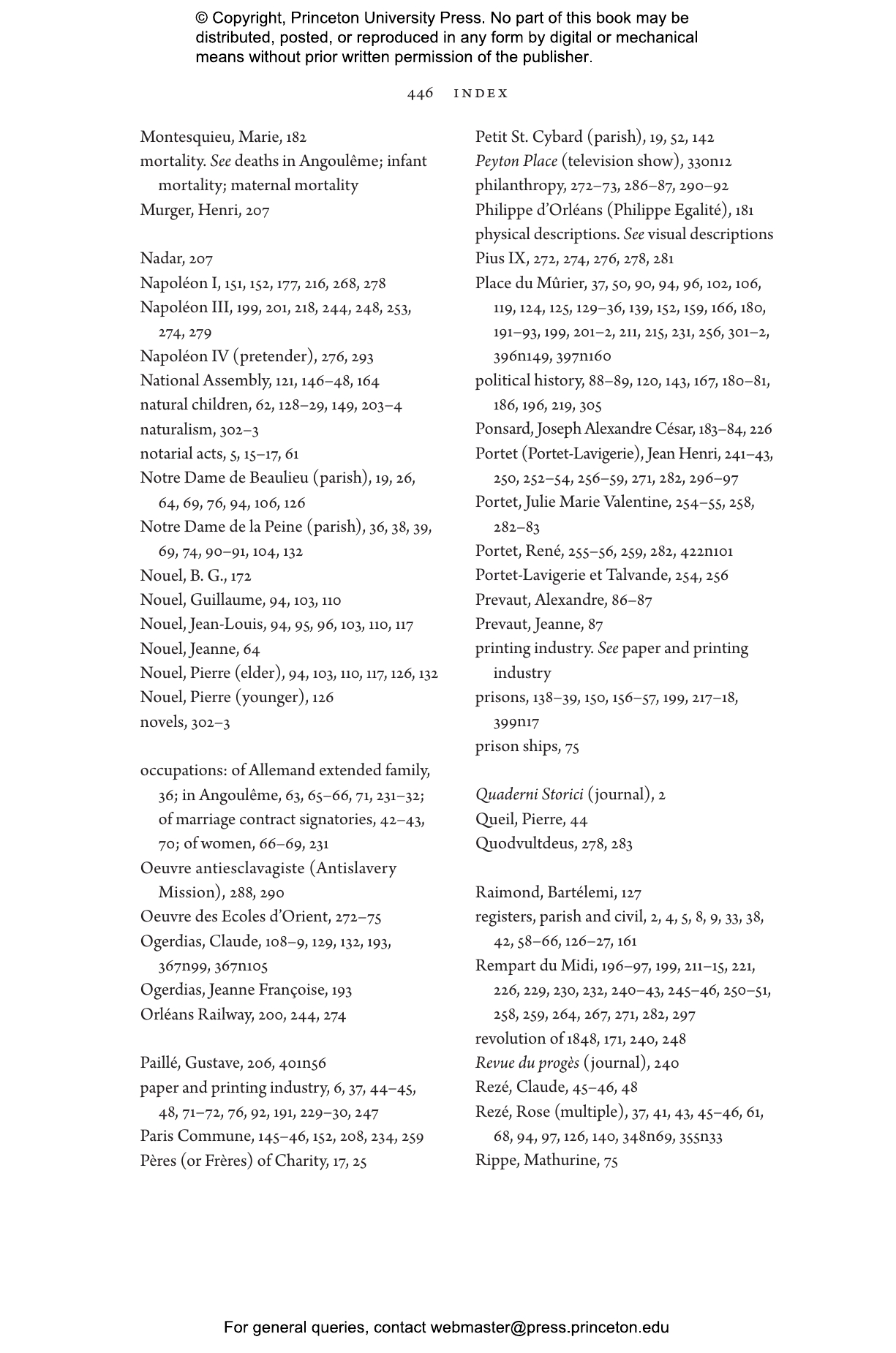 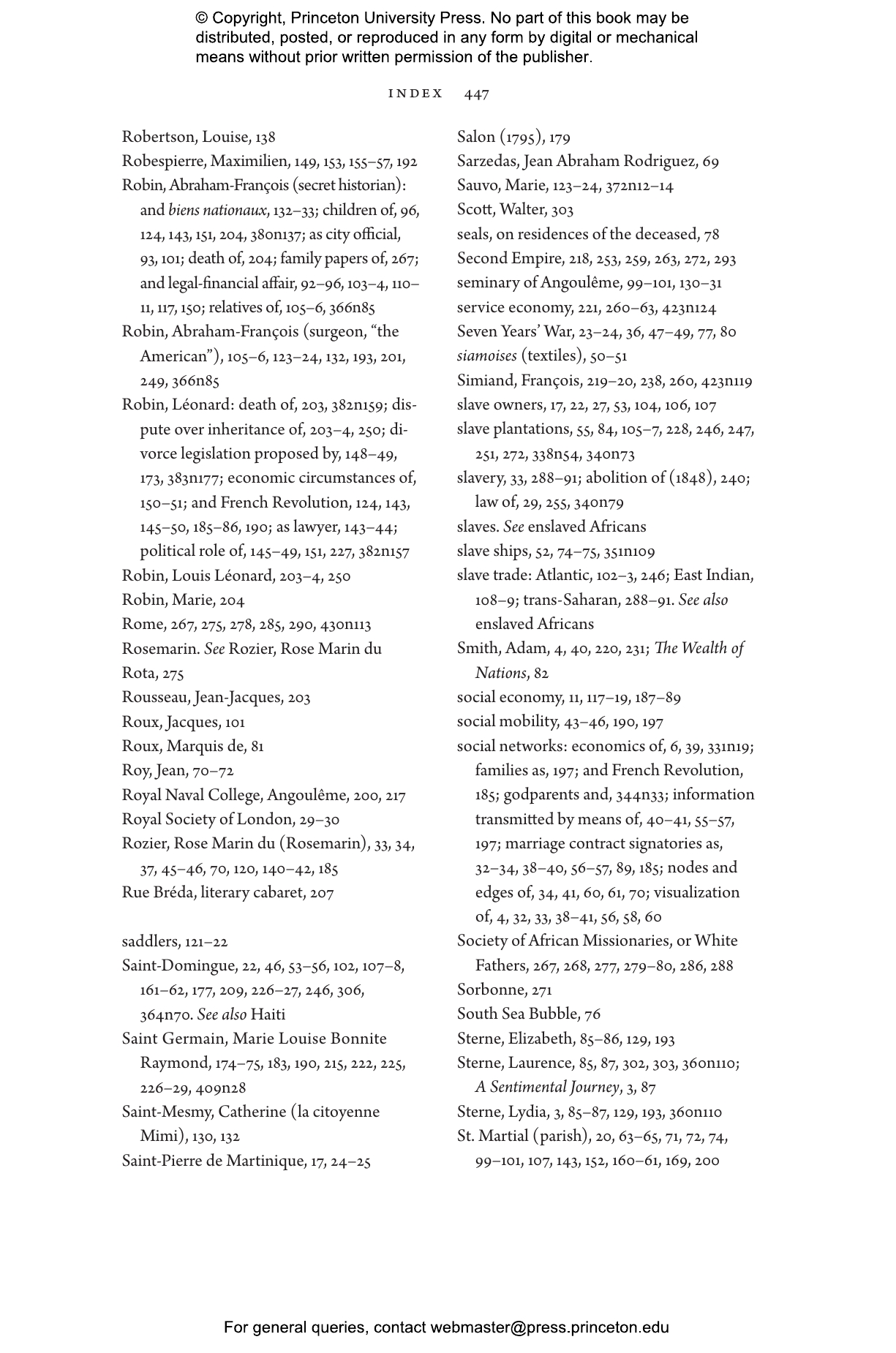 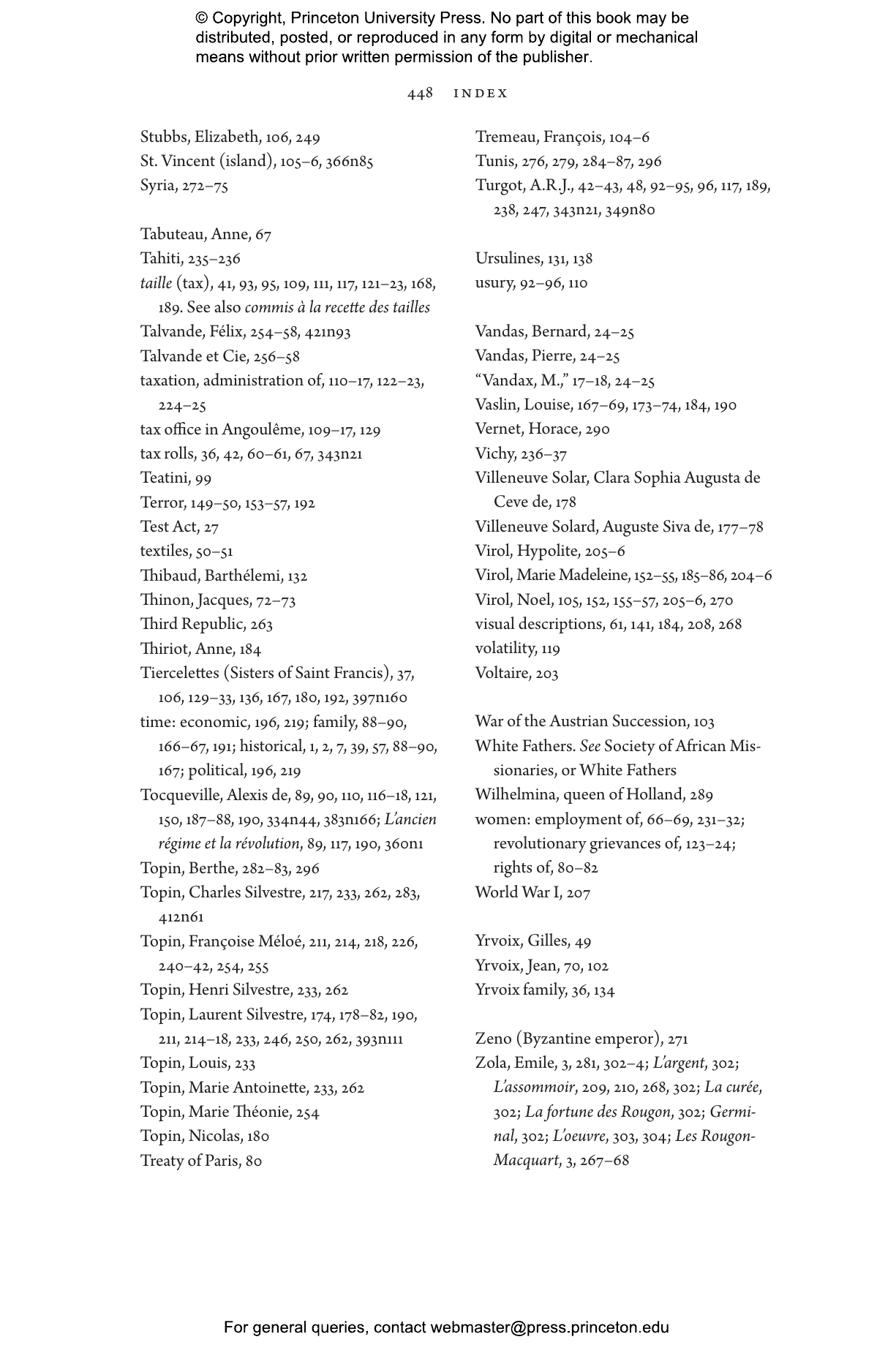 An innovative history of deep social and economic changes in France, told through the story of a single extended family across five generations 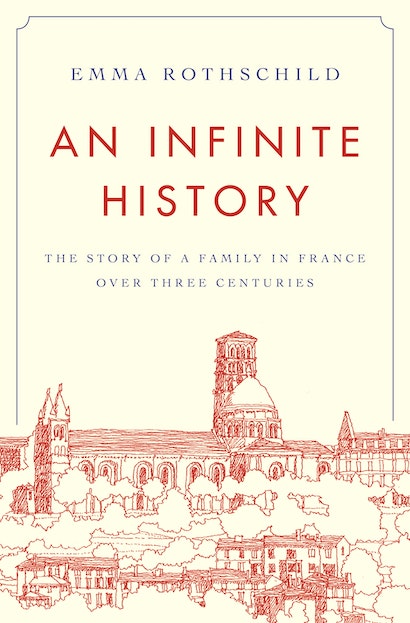 Marie Aymard was an illiterate widow who lived in the provincial town of Angoulême in southwestern France, a place where seemingly nothing ever happened. Yet, in 1764, she made her fleeting mark on the historical record through two documents: a power of attorney in connection with the property of her late husband, a carpenter on the island of Grenada, and a prenuptial contract for her daughter, signed by eighty-three people in Angoulême. Who was Marie Aymard? Who were all these people? And why were they together on a dark afternoon in December 1764? Beginning with these questions, An Infinite History offers a panoramic look at an extended family over five generations. Through ninety-eight connected stories about inquisitive, sociable individuals, ending with Marie Aymard’s great-great granddaughter in 1906, Emma Rothschild unfurls an innovative modern history of social and family networks, emigration, immobility, the French Revolution, and the transformation of nineteenth-century economic life.

Rothschild spins a vast narrative resembling a period novel, one that looks at a large, obscure family, of whom almost no private letters survive, whose members traveled to Syria, Mexico, and Tahiti, and whose destinies were profoundly unequal, from a seamstress living in poverty in Paris to her third cousin, the cardinal of Algiers. Rothschild not only draws on discoveries in local archives but also uses new technologies, including the visualization of social networks, large-scale searches, and groundbreaking methods of genealogical research.

"Rothschild rightly rejects what she describes as an ‘ideological’ division of the dead by historians between ‘important’—the people with substantial records—and ‘the unimportant . . . who can be counted, but cannot be understood.' Rather, as this book demonstrates, a focus on the ‘ordinary’ can offer new perspectives on periods of extraordinary change."—Laura O’Brien, Times Literary Supplement ​​​​​​​

"[An Infinite History] is a family history unlike any other because of the way Rothschild tells it. . . . By starting with the names and tracing them over space and especially time, Rothschild not only upends the usual methods of study but also compels a rethinking of many prevailing views about the politics, economy, and society of eighteenth- and nineteenth-century France."—Lynn Hunt, New York Review of Books

"Captivating. . . . One of the most successful attempts to put Ginzburg and Poni’s ‘science of the lived’ into action."—David A. Bell, The Nation

"[A] remarkable inquiry into the town of Angoulême, in southwestern France, beginning with the story of 'an inquisitive, illiterate woman, Marie Aymard,' and five generations of her extended family in the eighteenth and nineteenth centuries: the sort of history that has been exceedingly hard to tell, and therefore not often told."—Harvard Magazine

"Emma Rothschild leaves no stone unturned in her quest to trace one family through centuries and five generations... this is an inspiring and enjoyable demonstration of what can be achieved by skill, perseverance and a bit of luck."—Family Tree Magazine

"This innovative study of ordinary people in a French provincial town is a remarkable achievement of both painstaking research and historical imagination . . . . the result is a fascinating exercise in history from below, a history of chance encounters and social networks, of ambition and opportunity."—Alan Forrest, Family and Community History

"This is a tremendously engaging book which reads, paradoxically, like a capacious nineteenth-century novel. And not least because of its elusive dénouements and the absence of an authorial omniscience straining our suspension of disbelief, it is enriched by the certainty, validated by scholarship of the highest quality, that none of it is invented."—Robert Lethbridge, Journal of European Studies

"In Emma Rothschild’s remarkable analysis, a marriage contract in a Balzacian backwater becomes a portal into an ever-expanding historical universe spanning three continents and as many centuries. This is a strikingly original work full of surprising encounters, a brilliantly successful experiment in archival research, a meditation on historical writing, and a subtle exploration of the fortunes of individuals in their multiple frames of time and space."—Keith Baker, Stanford University

"An Infinite History is an extraordinary achievement. It is impossible not to compare Rothschild to Zola, for only a master of the craft could begin with an ordinary illiterate woman and use the most up-to-date methods to recreate a social world. Shattering longstanding assumptions about the immobility of life in the hinterland, this rich tapestry of a book will become a classic of historical writing for years to come."—Lynn Hunt, author of History: Why It Matters

"This astonishingly imaginative work combines a sweeping panorama of French society, from the Age of Revolutions to the eve of the Great War, with a subtly pointillist account of the personal quirks and individual destinies within a provincial city. Brilliantly achieved and written with warmth and wit, An Infinite History establishes Emma Rothschild as the Balzac of nineteenth-century history."—Colin Jones, Queen Mary University of London

"This fascinating, groundbreaking book alters our assumptions about historical scale through the linked stories of little-known people who sold lemonade, argued over petty debts, lost their beloved dogs, searched for missing relatives, and got in all kinds of ordinary and extraordinary trouble across a tumultuous century. As their lives begin to incorporate far-flung locations across the world—from Saint-Domingue and Tahiti to Syria—their town in provincial France becomes a microcosm of global transformation."—Amy Stanley, author of Stranger in the Shogun's City: A Japanese Woman and Her World