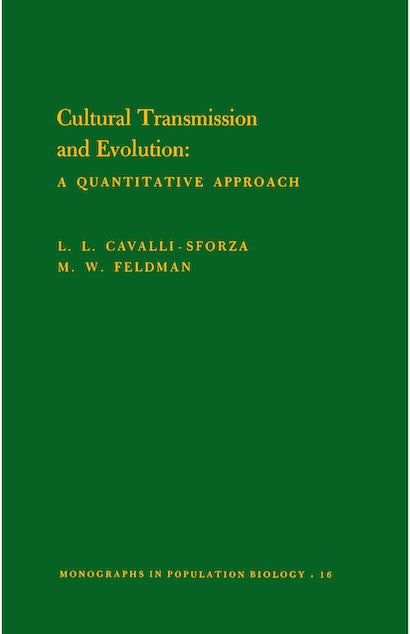 A number of scholars have found that concepts such as mutation, selection, and random drift, which emerged from the theory of biological evolution, may also explain evolutionary phenomena in other disciplines as well. Drawing on these concepts, Professors Cavalli-Sforza and Feldman classify and systematize the various modes of transmitting “culture” and explore their consequences for cultural evolution. In the process, they develop a mathematical theory of the non-genetic transmission of cultural traits that provides a framework for future investigations in quantitative social and anthropological science.

The authors use quantitative models that incorporate the various modes of transmission (for example, parent-child, peer-peer, and teacher-student), and evaluate data from sociology, archaeology, and epidemiology in terms of the models. They show that the various modes of transmission in conjunction with cultural and natural selection produce various rates of cultural evolution and various degrees of diversity within and between groups. The same framework can be used for explaining phenomena as apparently unrelated as linguistics, epidemics, social values and customs, and diffusion of innovations. The authors conclude that cultural transmission is an essential factor in the study of cultural change.

"To understand human evolution, we require, among other things, a theory describing the dynamics of culturally acquired phenotypes. In this book, Cavalli-Sforza and Feldman present a series of theoretical models that represent an important beginning toward such a theory."—BioScience