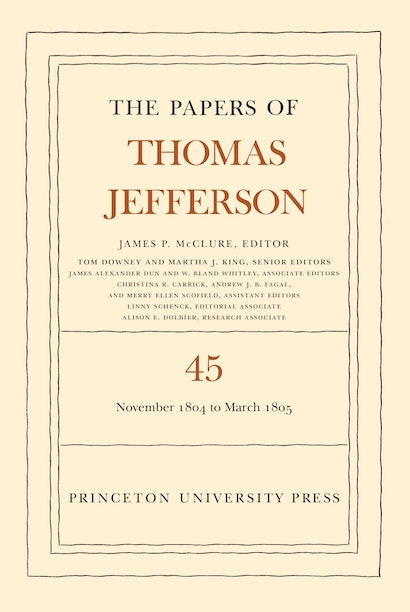 This volume opens soon after the start of the second session of the Eighth Congress and ends a few days after the session closes. During the period, Jefferson receives twice as many documents as he writes. He sits for portraits by Charles Févret de Saint-Mémin and Rembrandt Peale. The nation endures an extreme winter. William Dunbar begins to send information from the exploration of the Ouachita River. Acts of Congress create new territories and give Orleans Territory an assembly and a path to statehood. The Senate ratifies a treaty to acquire an estimated 50 million acres of land from the Sac and Fox tribes. Levi Lincoln resigns, Robert Smith asks to succeed him as attorney general, and Jefferson seeks a new secretary of the navy. Jefferson and vice-presidential candidate George Clinton receive 162 electoral ballots against 14 for their opponents, Charles Cotesworth Pinckney and Rufus King. Napoleon is crowned emperor of the French, and Spain declares war on Great Britain. The Senate acquits Samuel Chase of eight articles of impeachment. Jefferson prepares his inaugural address and is sworn into office for his second term on 4 March. He refuses to consider serving a third term.