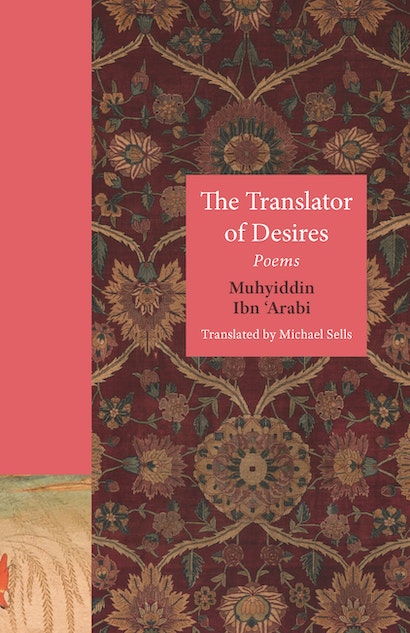 The Translator of Desires, a collection of sixty-one love poems, is the lyric masterwork of Muhyiddin Ibn ‘Arabi (1165–1240 CE), one of the most influential writers of classical Arabic and Islamic civilization. In this authoritative volume, Michael Sells presents the first complete English translation of this work in more than a century, complete with an introduction, commentary, and a new facing-page critical text of the original Arabic. While grounded in an expert command of the Arabic, this verse translation renders the poems into a natural, contemporary English that captures the stunning beauty and power of Ibn ‘Arabi’s poems in such lines as “A veiled gazelle’s / an amazing sight, / her henna hinting, / eyelids signalling // A pasture between / breastbone and spine / Marvel, a garden / among the flames!”

The introduction puts the poems in the context of the Arabic love poetry tradition, Ibn ‘Arabi’s life and times, his mystical thought, and his “romance” with Niẓām, the young woman whom he presents as the inspiration for the volume—a relationship that has long fascinated readers. Other features, following the main text, include detailed notes and commentaries on each poem, translations of Ibn ‘Arabi’s important prefaces to the poems, a discussion of the sources used for the Arabic text, and a glossary.

Bringing The Translator of Desires to life for contemporary English readers as never before, this promises to be the definitive volume of these fascinating and compelling poems for years to come.

Michael Sells is the Barrows Professor Emeritus of the History and Literature of Islam and professor emeritus of comparative literature at the University of Chicago. He is the author of many translations and studies of classical Arabic poetry.

“Michael Sells has produced a book of glories, poems like dry stones in reflecting water. This collection is both a visual experience for one who can’t read Arabic and a deep literary thrill for one who can open to these translations. The threads of Quranic sound are spread in patches on the pages. Here we see fulfilled a poetics of bewilderment. Without desire, where would the future be?”—Fanny Howe, author of Love and I: Poems

“Accurate yet not overawed by the Arabic texts, this authoritative translation renders Ibn 'Arabi’s Translator of Desires into a nuanced, flexible, and accessible modern idiom that enables English readers to enjoy the delights of these poetic gems.”—James E. Montgomery, University of Cambridge