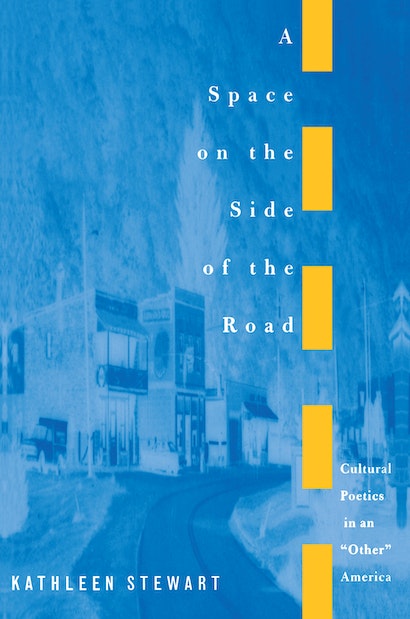 A Space on the Side of the Road vividly evokes an “other” America that survives precariously among the ruins of the West Virginia coal camps and “hollers.” To Kathleen Stewart, this particular “other” exists as an excluded subtext to the American narrative of capitalism, modernization, materialism, and democracy. In towns like Amigo, Red Jacket, Helen, Odd, Viper, Decoy, and Twilight, men and women “just settin’ ” track a dense social imaginary through stories of traumas, apparitions, encounters, and eccentricities. Stewart explores how this rhythmic, dramatic, and complicated storytelling imbues everyday life in the hills and forms a cultural poetics. Alternating her own ruminations on language, culture, and politics with continuous accounts of “just talk,” Stewart propels us into the intensity of this nervous, surreal “space on the side of the road.” It is a space that gives us a glimpse into a breach in American society itself, where graveyards of junked cars and piles of other trashed objects endure along with the memories that haunt those who have been left behind by “progress.”


Like James Agee’s portrayal of the poverty-stricken tenant farmers of the Depression South in Let Us Now Praise Famous Men, this book uses both language and photographs to help readers encounter a fragmented and betrayed community, one “occupied” by schoolteachers, doctors, social workers, and other professionals representing an “official” America. Holding at bay any attempts at definitive, social scientific analysis, Stewart has concocted a new sort of ethnographic writing that conveys the immediacy, density, texture, and materiality of the coal camps. A Space on the Side of the Road finally bridges the gap between anthropology and cultural studies and provides us with a brilliant and challenging experiment in thinking and writing about “America.”

Kathleen Stewart is Assistant Professor of Anthropology at the University of Texas, Austin.

"[A] subtle and rich ethnography of southwestern West Virginia. From everyday language ... Stewart conjures a dynamic, conflictual portrait of life in the 'hollers' and coal camps.... A Space on the Side of the Road is without a doubt one of the best examples of the new ethnography."—American Journal of Sociology