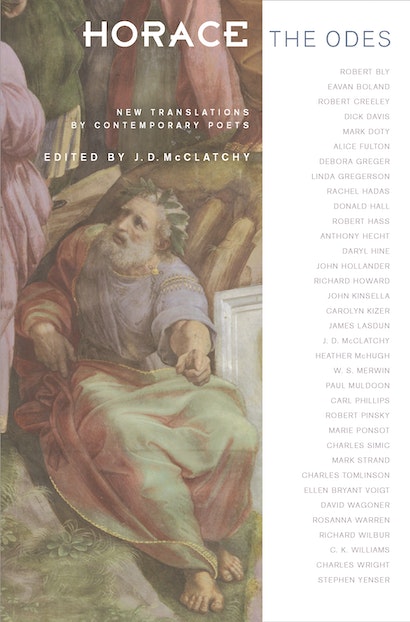 They have inspired poets and challenged translators through the centuries. The odes of Horace are the cornerstone of lyric poetry in the Western world. Their subtlety of tone and brilliance of technique have often proved elusive, especially when — as has usually been the case — a single translator ventures to maneuver through Horace’s infinite variety. Now for the first time, leading poets from America, England, and Ireland have collaborated to bring all 103 odes into English in a series of new translations that dazzle as poems while also illuminating the imagination of one of literary history’s towering figures.


The thirty-five contemporary poets assembled in this outstanding volume include nine winners of the Pulitzer prize for poetry as well as four former Poet Laureates. Their translations, while faithful to the Latin, elegantly dramatize how the poets, each in his or her own way, have engaged Horace in a spirited encounter across time.


Each of the odes now has a distinct voice, and Horace’s poetic achievement has at last been revealed in all its mercurial majesty. In his introduction, J. D. McClatchy, the volume’s editor and one of the translators, reflects on the meaning of Horace through the ages and relates how a poet who began as a cynical satirist went on to write the odes. For the connoisseur, the original texts appear on facing pages allowing Horace’s ingenuity to be fully appreciated. For the general reader, these new translations — all of them commissioned for this book — will be an exhilarating tour of the best poets writing today and of the work of Horace, long obscured and now freshly minted.

J. D. McClatchy, Professor of English at Yale University, is the author of five collections of poetry, most recently Hazmat. The author of two volumes of literary essays and several opera libretti as well, he has edited numerous books, including The Vintage Book of Contemporary World Poetry. McClatchy has been Editor of The Yale Review since 1991.

"McClatchy's fellow poets have succeeded where many a scholar has failed. . . . The resulting collection is . . . a wonderfully varied tribute to the mercurial poet it honors."—Amanda Kolson Hurley, Times Literary Supplement

"Many of the 35 poets here are well established—Charles Simic, Robert Bly, Anthony Hecht; others are known as distinguished translators; and the match with Horace tends to put them on top form. . . . But even the most brilliant ideas can flop in execution. This one soars. It brings us as close to the real Horace as we can come."—Tom Payne, The Daily Telegraph

"This book will help initiate—and re-initiate—modern readers to some of the best lyric poetry ever produced. . . . [T]he poems are rendered not by one hand, but by the best contemporary poets. . . . J. D. McClatchy has doled out his assignments wisely to the finest poets writing in English in England, America, and Ireland, and they've done their work well."—Tracy Lee Simmons, The Weekly Standard

"J. D. McClatchy's extraordinary collection gives us the richest version of Horace's odes ever made available in English."—Harold Bloom

"This is an invigorating book. A veritable parnassium of poets has brought us Horace, not just in today's terms but in yesterday's glory. No doubt each reader will prefer this translation to that, but it is a choice among succulents. With schoolroom dust removed, here is a poet as bright as every day, yet sober as a man who has felt twilight's arrival in every dawn."—William H. Gass