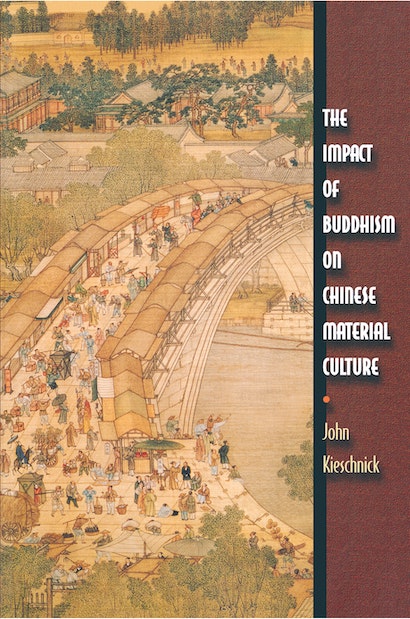 From the first century, when Buddhism entered China, the foreign religion shaped Chinese philosophy, beliefs, and ritual. At the same time, Buddhism had a profound effect on the material world of the Chinese. This wide-ranging study shows that Buddhism brought with it a vast array of objects big and small — relics treasured as parts of the body of the Buddha, prayer beads, and monastic clothing — as well as new ideas about what objects could do and how they should be treated. Kieschnick argues that even some everyday objects not ordinarily associated with Buddhism — bridges, tea, and the chair — on closer inspection turn out to have been intimately tied to Buddhist ideas and practices. Long after Buddhism ceased to be a major force in India, it continued to influence the development of material culture in China, as it does to the present day.


At first glance, this seems surprising. Many Buddhist scriptures and thinkers rejected the material world or even denied its existence with great enthusiasm and sophistication. Others, however, from Buddhist philosophers to ordinary devotees, embraced objects as a means of expressing religious sentiments and doctrines. What was a sad sign of compromise and decline for some was seen as strength and versatility by others. Yielding rich insights through its innovative analysis of particular types of objects, this briskly written book is the first to systematically examine the ambivalent relationship, in the Chinese context, between Buddhism and material culture.

John Kieschnick is an associate research fellow at the Institute of History and Philology, Academia Sinica, in Taipei.

"I fully recommend this book. . . . Kieschnick deserves high praise for a thoughtful and sustained presentation of a crucial element of the Chinese Buddhist tradition."—Alan Cole, Journal of Chinese Religions

"John Kieschnick has produced a very good book on a topic that deserves attention. . . . He has opened up new areas of inquiry that will no doubt stimulate further investigation. One has every reason to expect that the book will be widely read and appreciated for years to come."—James A. Benn, Harvard Journal of Asiatic Studies

"This book . . . makes a lasting contribution to our understanding of the diverse ways in which Buddhism and material culture interacted in China."—Koichi Shinohara, Journal of Asian Studies

"The direct confrontation of the material expressions of [Buddhism] has finally materialized with the publication of John Kieschnick's The Impact of Buddhism on Chinese Material Culture. In this sense, the new book indeed breaks new ground in the studies of Chinese Buddhism. . . . Kieschnick has written an insightful, informative, and entertaining book. . . . He should be congratulated by us all for his admirable scholarship."—Yuet Keung Lo, Asian Journal of Social Science

"A remarkable achievement. By applying his Buddhological training to a topic typically ignored by Buddhologists, material objects, John Kieschnick has produced an original and groundbreaking book—the first of its kind not only in the area of Chinese Buddhism, but in the field of Buddhism writ large. There is simply nothing like this available in any Western language. Despite the technical nature of the subject, he manages to keep the scholarly apparatus unobtrusive. I would not hesitate to make it required reading in all of my upper level and graduate courses on Chinese Buddhism."—Robert Sharf, University of Michigan