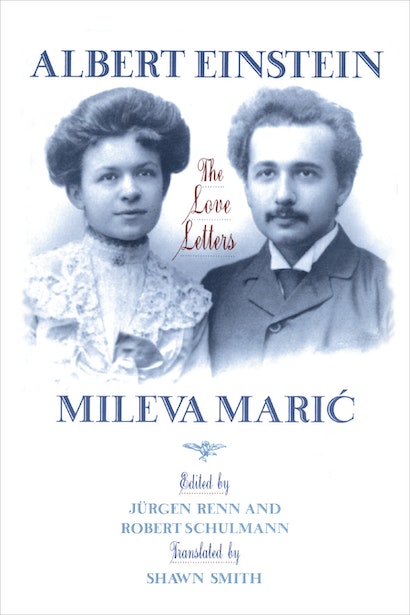 In 1903, despite the vehement objections of his parents, Albert Einstein married Mileva Maric, the companion, colleague, and confidante whose influence on his most creative years has given rise to much speculation. Beginning in 1897, after Einstein and Maric met as students at the Swiss Federal Polytechnic, and ending shortly after their marriage, these fifty-four love letters offer a rare glimpse into Einstein’s relationship with his first wife while shedding light on his intellectual development in the period before the annus mirabilis of 1905. Unlike the picture of Einstein the lone, isolated thinker of Princeton, he appears here both as the burgeoning enfant terrible of science and as an amorous young man beset, along with his fiance, by financial and personal struggles — among them the illegitimate birth of their daughter, whose existence is known only by these letters. Describing his conflicts with professors and other scientists, his arguments with his mother over Maric, and his difficulty obtaining an academic position after graduation, the letters enable us to reconstruct the youthful Einstein with an unprecedented immediacy. His love for Maric, whom he describes as “a creature who is my equal, and who is as strong and independent as I am,” brings forth his serious as well as playful, often theatrical nature. After their marriage, however, Maric becomes less his intellectual companion, and, failing to acquire a teaching certificate, she subordinates her professional goals to his. In the final letters Einstein has obtained a position at the Swiss Patent Office and mentions their daughter one last time to his wife in Hungary, where she is assumed to have placed the girl in the care of relatives. Informative, entertaining, and often very moving, this collection of letters captures for scientists and general readers alike a little known yet crucial period in Einstein’s life.

"Will further undermine the stereotype and reward all who delight in the company of young people deliciously in love. We all have trunks in the attic harboring letters that reveal the same impatience with parents, the same youthful naïveté, passion and delight. But this was Einstein, and that makes all the difference."—New York Times Book Review

"This excellent book will be of especial interest to academics and Einstein devotees."—Sunday Telegraph

"This illuminating and surprising collection opens with an excellent introduction that sets the stage for this record of a difficult romance."—Booklist