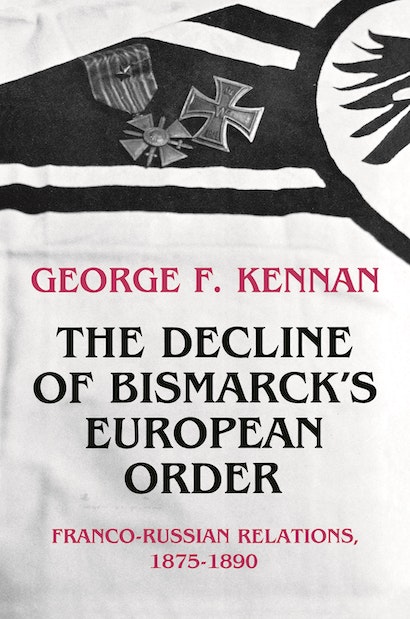 In an attempt to discover some of the underlying origins of World War I, the eminent diplomat and writer George Kennan focuses on a small sector of offstage events to show how they affected the drama at large long before the war even began. In the introduction to his book George Kennan tells us, “I came to see World War I … as the great seminal catastrophe of this century — the event which … lay at the heart of the failure and decline of this Western civilization.” But, he asks, who could help being struck by the contrast between this apocalyptic result and the “delirious euphoria” of the crowds on the streets of Europe at the outbreak of war in 1914! “Were we not,” he suggests, “in the face of some monstrous miscalculation — some pervasive failure to read correctly the outward indicators of one’s own situation?” It is from this perspective that Mr. Kennan launches a “micro-history” of the Franco-Russian relationship as far back as the 1870s in an effort to determine the motives that led people “to wander so blindly” into the horrors of the First World War.

George F. Kennan (1904 -2005) was the U.S. Ambassador to Russia and Yugoslavia, and professor emeritus at the Institute for Advanced Study, Princeton. He is the author of many books, including Soviet-American Relations, 1917-1920 (two volumes) and From Plague After Munich: Diplomatic Papers, 1938-1940 (both from Princeton).

"Mr. Kennan takes full advantage of the colorful opportunities that the Franco-Russian romance presents. He has not only advanced our knowledge significantly by impressive research; he presents his results with great skill; he writes beautifully, harmoniously, and vividly. He is at his best when revealing how human frailties played havoc with national interests."—Theodore Zeldin, The New York Times Book Review

"Our former Ambassador to Russia and Yugoslavia brings to this study the attributes of a seasoned diplomat, historian, and linguist. With admirable clarity and fluency, Kennan . . . untangles the skein of European and Balkan politics of the late 1800s . . . and traces the rise of nationalism and militarism which led to W.W.I."—Publishers Weekly

"The world which George Kennan describes with great elegance and skill and with much lively atmospheric detail is the world of traditional nineteenth-century diplomacy. . . . The great achievement of George Kennan's book is that he uses his scholarship and his extensive knowledge of the large body of secondary literature on the Franco-Russian Alliance to remind us how high diplomacy of the late nineteenth century looked to contemporaries."—James Joll, The New York Review of Books

"This is a serious historical volume, but the people it involves, those who influenced or controlled Franco-Russian relations from 1875 to 1890, are . . . a most astonishing set of zanies, scalawags, and fanatics, all vividly characterized by Mr. Kennan."—The Atlantic Monthly