From an “uncommonly fluent” and “rewarding” poet (The Observer), a collection of miniature epics that asks: can grace be found amid disarray? 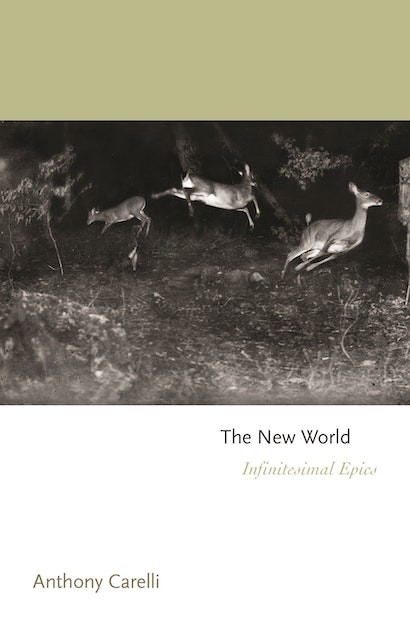 The New World, Anthony Carelli’s new collection of poems, is an American travelogue that unfolds in a series of darkly comic episodes, with allusions to Dante as a thread throughout. In these epics in miniature, we meet a pilgrim-poet as he awaits the arrival of his child, a would-be Columbus, on the shores of a land “disenstoried” by explorers present and past. It’s a land and a people largely lost in mindscapes and mythscapes, haunted by sketchy aspirational visions, misbegotten misremembering, and emptiness. Nonetheless, the poet steps out to the shore to sing for the child—and reader—to do what Columbus never did: “land gently. / And listen and / listen and listen / and stay.” Constantly unsettling the rhetoric of inherited forms, the poet shaping these poems is always bound to the pilgrim, who cannot pretend to dissolve our purgatories but can only invite us—as a latter-day Virgil would—deeper into the uncanny encounters that encircle us. From an Arizona nursing home and a grandmother’s memory of a stolen golden Schwinn in the occupied Philippines, to a tale of road-tripping west through Pennsylvania as sunrise transpires in the wrong sky, The New World opens strange spaces for us to re-see, lament, and re-sing the stories we tell.

Anthony Carelli’s first book of poems, Carnations (Princeton), was a finalist for the Levis Reading Prize. His poems have appeared in the New Yorker, Commonweal, and many other publications. The recipient of a Hodder Fellowship and a Whiting Award, he teaches at New York University and lives in Brooklyn, New York.

“Anthony Carelli writes with exuberance, healthy skepticism, and a deep love of what is most strange in people, animals, and landscape. In this hospitable, funny, hopeful-and-quietly-despairing book, strange is the gap between what we truly feel and what we think we ought to feel. No poet I know writes so closely or so faithfully to that sense of estrangement, and with such unpredictable but humane insight.”—Tom Sleigh, author of House of Fact, House of Ruin: Poems and The Land Between Two Rivers: Writing in an Age of Refugees