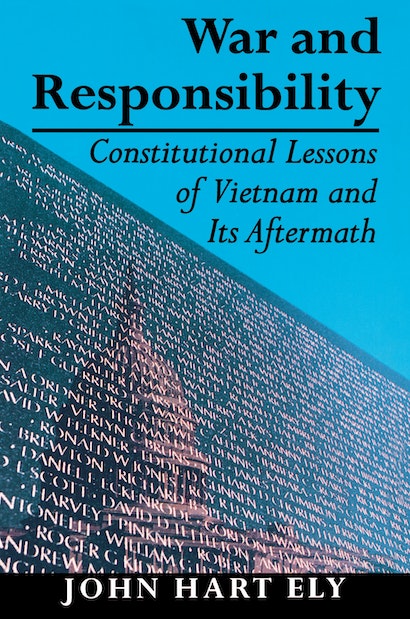 Formerly the Tyler Professor of Constitutional Law at Harvard University and then Dean of Stanford Law School, John Hart Ely is Robert E. Paradise Professor at Stanford. His Democracy and Distrust: A Theory of Judicial Review won the Order of the Coif triennial award for the best book published in any field of law during the years 1980 through 1982.

"John Hart Ely has done a remarkable job in taking a series of elegant and sophisticated legal arguments and presenting them in an unusually concise and readable form. More important, he has breathed new life into the War Powers Resolution with a handful of suggestions that could bring the war power back to where it was intended, the representatives of the people."—Melvin Small, History: Reviews of New Books

"This is scholarship with a difference. . . . Now that this book exists, no one should engage in discussions about war and U.S. responsibility or the War Powers Act without having first consulted it."—James Finn, Commonweal

"In this short but compellingly reasoned book, John Hart Ely argues that the congressional effort to regain its constitutional power has essentially failed. . . . With clarity and sophistication, [he] walks us through a mine field of legal and political nuances. . . . Ely's fine book should be seen as part of a revival of scholarly commitment to the separation of powers and to the theory of governing that undergirds it."—The Annals of the Academy of Political and Social Science

"In this splendid volume Ely gives us the mature, ripened intellectual fruit of at least a quarter century's thought and the reflection by a leading constitutional law scholar on [a] most divisive public issue."—Daniel J. Kornstein, New York Law Journal