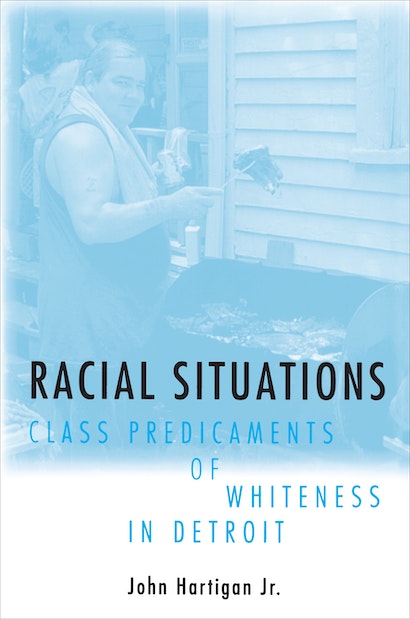 Racial Situations challenges perspectives on race that rely upon oft-repeated claims that race is culturally constructed and, hence, simply false and distorting. John Hartigan asserts, instead, that we need to explain how race is experienced by people as a daily reality. His starting point is the lives of white people in Detroit. As a distinct minority, whites in this city can rarely assume they are racially unmarked and normative — privileges generally associated with whiteness. Hartigan conveys their attempts to make sense of how race matters in their lives and in Detroit generally. Rather than compiling a generic sampling of white views, Hartigan develops an ethnographic account of whites in three distinct neighborhoods — an inner city, underclass area; an adjacent, debatably gentrifying community; and a working-class neighborhood bordering one of the city’s wealthy suburbs. In tracking how racial tensions develop or become defused in each of these sites, Hartigan argues that whites do not articulate their racial identity strictly in relation to a symbolic figure of black Otherness. He demonstrates, instead, that intraracial class distinctions are critical in whites’ determinations of when and how race matters.


In each community, the author charts a series of names — “hillbilly,” “gentrifier,” and “racist” — which whites use to make distinctions among themselves. He shows how these terms function in everyday discourses that reflect the racial consciousness of the communities and establish boundaries of status and privilege among whites in these areas.

John Hartigan Jr. is Assistant Professor in the Institute of Anthropology at the University of North Texas. His work on "white trash" and the "white underclass" has been published in a range of journals and edited volumes.

"Hartigan is a good storyteller . . . and a clear analyst of how local residents, black and white, make sense of race as it affects their lives and their sometimes desperate attempts to make do in this impoverished bit of the city. . . . By asking us to see race and class in different ways, this book helps us to imagine a world where such categories might be meaningless or superseded, even as it immerses us in the intractable, dangerous and hurtful relationships these fields of inequality perpetuate around us."—Marc Christensen, Metro Times Detroit

"A sobering examination of the tangled web of race, class, and struggles over space."—Choice

"This inventive, impressive [book] . . . contributes to the reorientation of studies of white identity . . . [It will] reward historians who venture into this ambitious anthropological account."—David Roediger, Journal of American Ethnic History

"This is an excellent book that ought to be widely read . . . Substantively important, theoretically sophisticated, and full of unforgettable characters."—Eduardo Bonilla-Silva, Contemporary Sociology

"Racial Situations is an innovative and theoretically sophisticated study of the process of racial formation among white residents of urban Detroit. Hartigan's ethnographic material is vivid and compelling and yields an uncompromisingly complex view of how whiteness is lived in American society. This book makes a major contribution to our understanding of the dynamic interplay of race, class, and culture in the everyday lives of urban residents."—Steven Gregory, Columbia University

"John Hartigan's distinctive ethnography will propel white readers across boundaries that they might prefer not to acknowledge. He effects a crucial move, long hoped for in 'whiteness studies'-a critical examination of liberal notions of race through a confrontation with whites' own despised 'others.'"—George Marcus, Rice University

"John Hartigan is a terrific listener and an insightful thinker, and this book shows why both are important. In an era of seemingly inescapable racial thinking in this country, Hartigan asks us to notice how and when 'race' matters, and to be open to the possibility that some situations will surprise us. Richly nuanced and wonderfully peopled, this book is also courageous. It conveys compassion and understanding even when we might just expect criticism. Compelling, at times even gripping, this is a book I am very glad to have read."—Virginia Domínguez, University of Iowa

"Drawing on rich comparative ethnography and subtle theorizing, Racial Situations is a timely reflection on major changes in the contemporary United States. The book makes an important contribution to theoretical and conceptual work on race and class in the various disciplines that converge around cultural studies and also provides this vital and contested field with further evidence of the value to be gained from innovative ethnographic research."—Roger Rouse, University of California, Davis