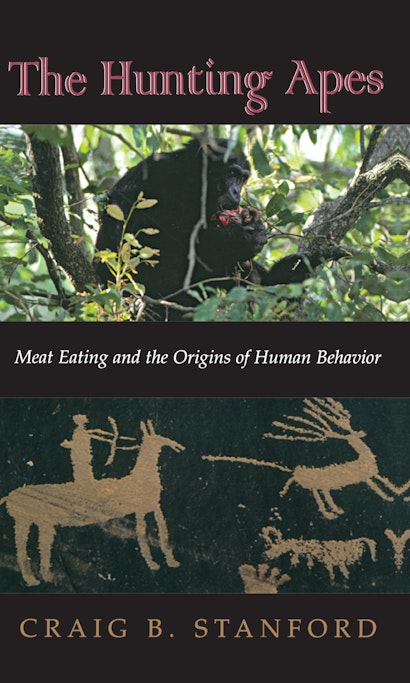 What makes humans unique? What makes us the most successful animal species inhabiting the Earth today? Most scientists agree that the key to our success is the unusually large size of our brains. Our large brains gave us our exceptional thinking capacity and led to humans’ other distinctive characteristics, including advanced communication, tool use, and walking on two legs. Or was it the other way around? Did the challenges faced by early humans push the species toward communication, tool use, and walking and, in doing so, drive the evolutionary engine toward a large brain? In this provocative new book, Craig Stanford presents an intriguing alternative to this puzzling question — an alternative grounded in recent, groundbreaking scientific observation. According to Stanford, what made humans unique was meat. Or, rather, the desire for meat, the eating of meat, the hunting of meat, and the sharing of meat.


Based on new insights into the behavior of chimps and other great apes, our now extinct human ancestors, and existing hunting and gathering societies, Stanford shows the remarkable role that meat has played in these societies. Perhaps because it provides a highly concentrated source of protein — essential for the development and health of the brain — meat is craved by many primates, including humans. This craving has given meat genuine power — the power to cause males to form hunting parties and organize entire cultures around hunting. And it has given men the power to manipulate and control women in these cultures. Stanford argues that the skills developed and required for successful hunting and especially the sharing of meat spurred the explosion of human brain size over the past 200,000 years. He then turns his attention to the ways meat is shared within primate and human societies to argue that this all-important activity has had profound effects on basic social structures that are still felt today.


Sure to spark a lively debate, Stanford’s argument takes the form of an extended essay on human origins. The book’s small format, helpful illustrations, and moderate tone will appeal to all readers interested in those fundamental questions about what makes us human.

Craig B. Stanford, Associate Professor of Anthropology at the University of Southern California, has conducted field studies of apes and monkeys in Africa, Asia, and Latin America. He is the author of the recent book Chimpanzee and Red Colobus.

"Anyone who would like to review all of the arguments on human origins should read The Hunting Apes. . . . This book will go a long way in explaining why physical anthropologists and their colleagues fight so much."—Deborah L. Manzolillo, Times Literary Supplement

"A brave academic endeavour and a fine piece of popular science writing. . . . Stanford's book summarises a huge body of evidence in a pleasing, coherent and non-polemic way. You'll feel that you're talking with a learned . . . dinner companion, rather than enduring a lecture or hectoring sermon from an academic pulpit."—Adrian Barnett, New Scientist

"[A] provocative new look at what made people so smart. . . . This is a fascinating book, written for the nonspecialist."—Booklist

"An unabashed celebration of the carnivorous tendencies of early humankind. Virtually every aspect of Stanford's thesis about the importance of meat acquisition and sharing among early humans is steeped in controversy."—Kirkus Reviews

"[An] admirable little book. . . . [Stanford's] meticulously constructed study is both readable and thought-provoking and gives fascinating insights into the behaviour of our species."—The Tablet

"The Hunting Apes is a very enjoyable and quick read, written for a broad audience. . . . These are well-written synopses—good for students, the general informed public, and those in anthropology and other sub-disciplines who want to keep up on these topics."—M. Tappen, Journal of the Royal Anthropological Institute

"The 'Man the Hunter' model of the 1960s was simultaneously one of the most influential and reviled of ideas about human origins. It fell easy victim to numerous criticisms (drawn especially from work on chimpanzees), and dropped from favor during the 1970s. There was, however, a baby in that bath and Stanford has rescued it, dried it off, and refined it with volumes of new data and theory. The result is a sophisticated and provocative synthesis of ëMan the Hunterí and chimpanzee behavioral ecology."—Jim Moore, University of California, San Diego

"Stanford's essay neatly captures the powerful role that hunting has played in human evolution and in the minds of evolutionists."—Richard Wrangham, Harvard University, author of Demonic Males: Apes and the Originis of Human Violence