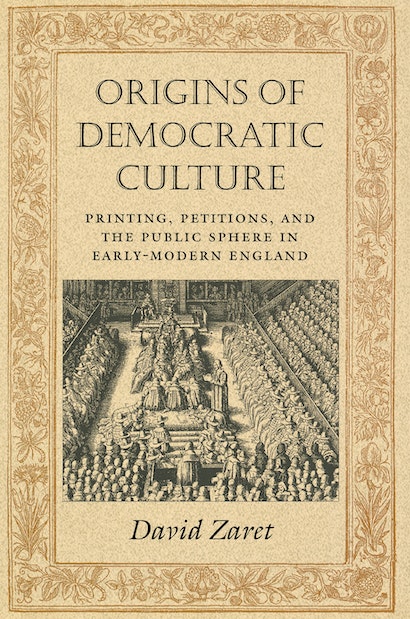 This innovative work of historical sociology locates the origins of modern democratic discourse in the emergent culture of printing in early modern England. For David Zaret, the key to the rise of a democratic public sphere was the impact of this culture of printing on the secrecy and privilege that shrouded political decisions in seventeenth-century England. Zaret explores the unanticipated liberating effects of printing and printed communication in transforming the world of political secrecy into a culture of open discourse and eventually a politics of public opinion.


Contrary to those who locate the origins of the public sphere in the philosophical tracts of the French Enlightenment, Zaret claims that it originated as a practical accomplishment, propelled by economic and technical aspects of printing — in particular heightened commercialism and increased capacity to produce texts. Zaret writes that this accomplishment gained impetus when competing elites — Royalists and Parliamentarians, Presbyterians and Independents — used printed material to reach the masses, whose leaders in turn invoked the authority of public opinion to lobby those elites.


Zaret further shows how the earlier traditions of communication in England, from ballads and broadsides to inn and alehouse conversation, merged with the new culture of print to upset prevailing norms of secrecy and privilege. He points as well to the paradox for today’s critics, who attribute the impoverishment of the public sphere to the very technological and economic forces that brought about the means of democratic discourse in the first place.

David Zaret is Executive Associate Dean of the College of Arts and Sciences and Professor of Sociology at Indiana University. He is the author of The Heavenly Contract: Ideology and Organization in Pre-Revolutionary Puritanism.

"In this thoughtful and innovative work of historical sociology, Zaret challenges the prevailing view that democratic discourse and the politics of public opinion emerged from the culture of the Enlightenment."—Choice

"Zaret has provocative and challenging things to say, and even those who disagree with his conclusion will find this a powerful work. . . . This book itself is full of telling evidential details, cited without fanfare, that cumulatively show how an unusually perceptive author can use such nuances to fine-tune our larger stories about the past. Both sociologists and historians can read it with immense profit."—Adrian Johns, American Historical Review

"David Zaret's Origins of Democratic Culture is an elegant, lucid, impeccably researched monograph that presents a cogent analysis of how a vibrant public sphere contributes to democratic practice. . . . [It] advances our understanding of how political cultures operate. It marks Zaret as one of the major cultural historical sociologists in contemporary American sociology and will be 'must' reading for scholars of democracy and culture from all social science disciplines as well as for graduate seminars in comparative historical social science."—Mabel Berezin, Social Forces

"This is a compelling interdisciplinary study that synthesizes recent historical scholarship on early modern politics and news culture with detailed archival research, and places its findings in a broad sociological perspective that offers a powerful corrective to prevailing conceptions of the origins, nature, and social composition of the early modern public sphere."—Alastair Bellany, Journal of Interdisciplinary History

"Historically well informed, lucidly and persuasively written, and making a skillful synthesis of the general and the particular, Zaret's book deserves to be widely read by historians and sociologists alike."—Peter Burke, American Journal of Sociology

"A major contribution the the substantive debate about the origins of the public sphere and democratic politics."—Bryan S. Turner, Contemporary Sociology

"[An] engaging and persuasive book. . . . Zaret argues that it was the explosion of printing in England during the 1640s which precipitated the crucial turning point in the origins of democratic culture."—Adam Fox, European Review of History