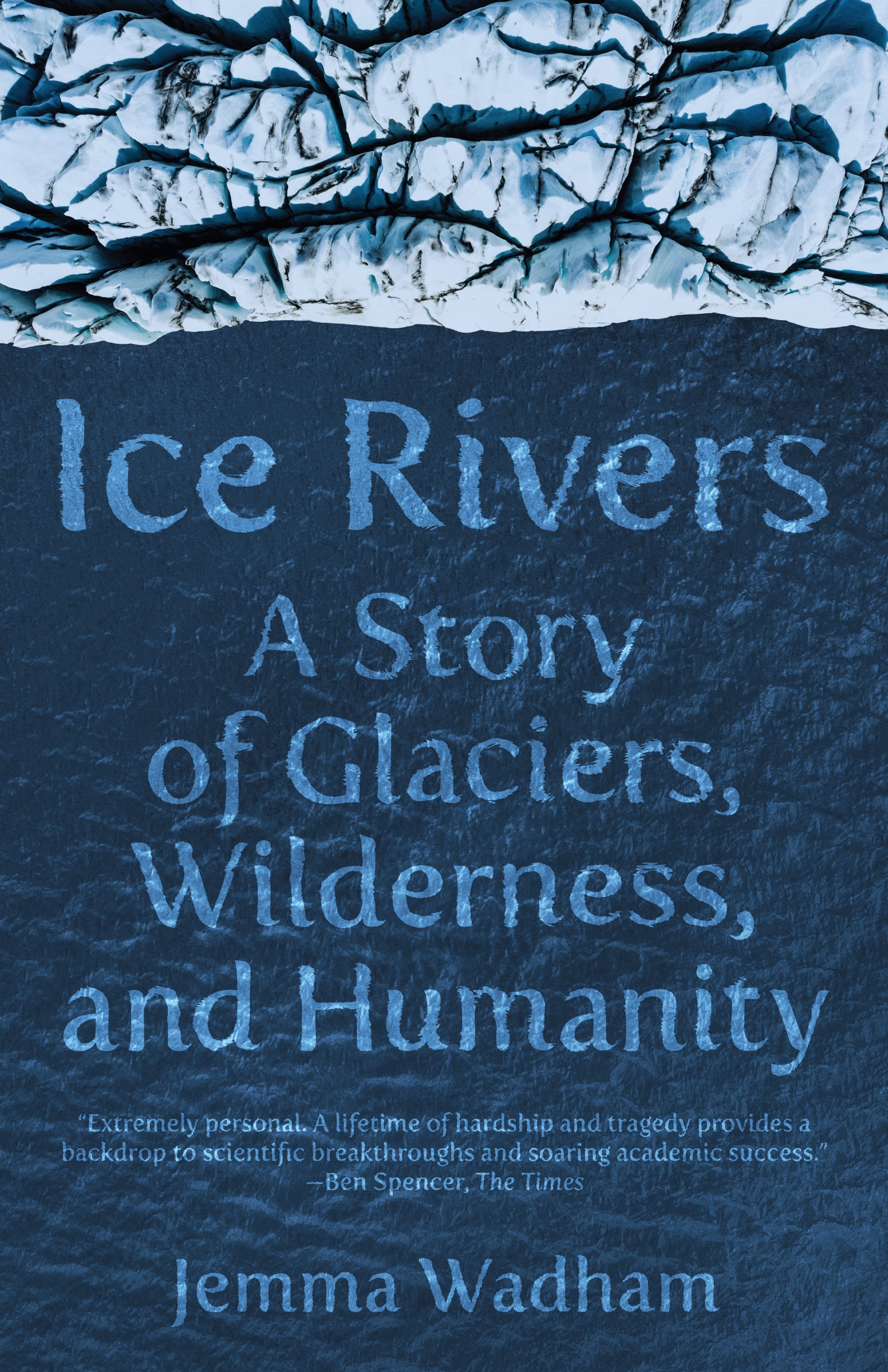 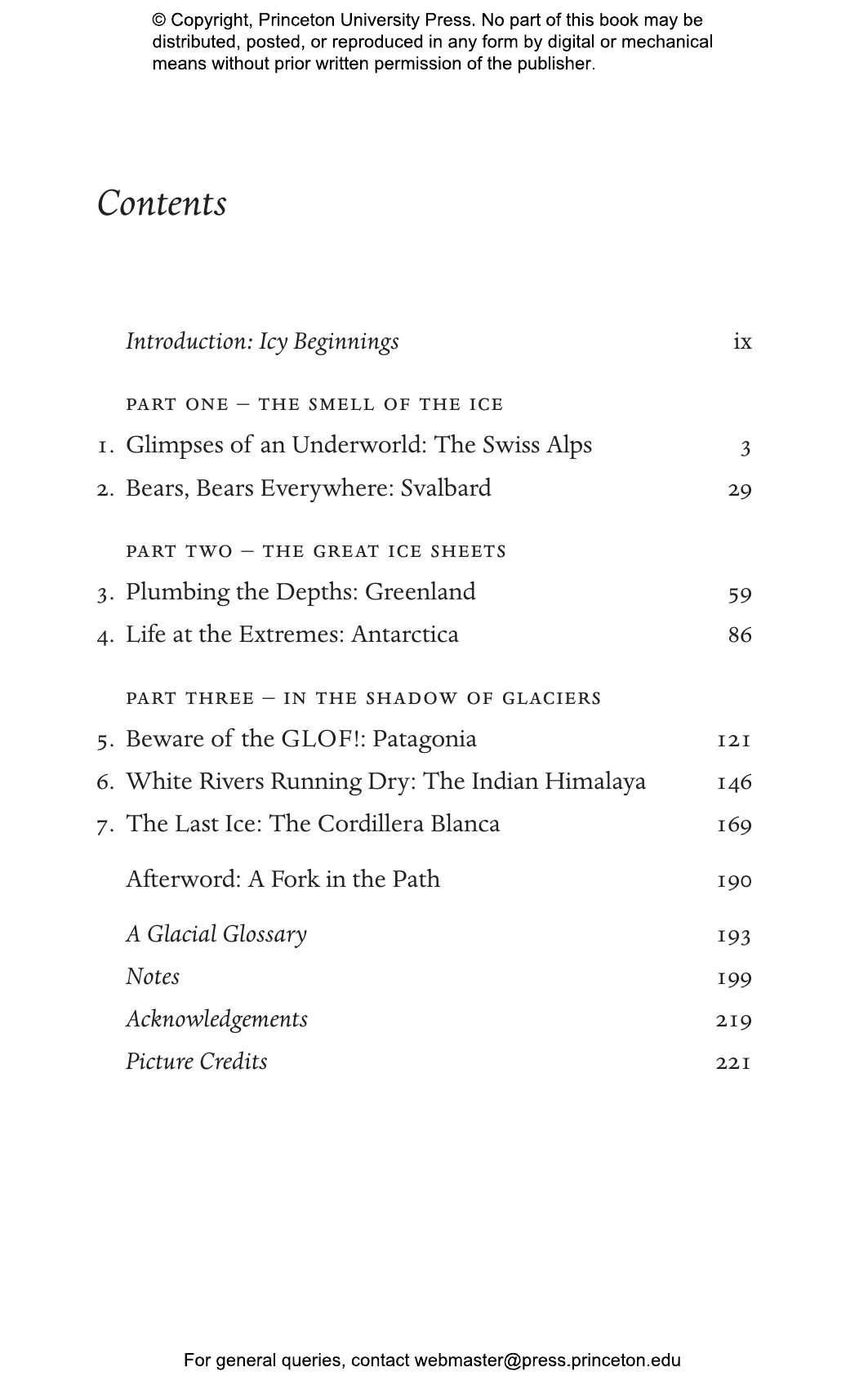 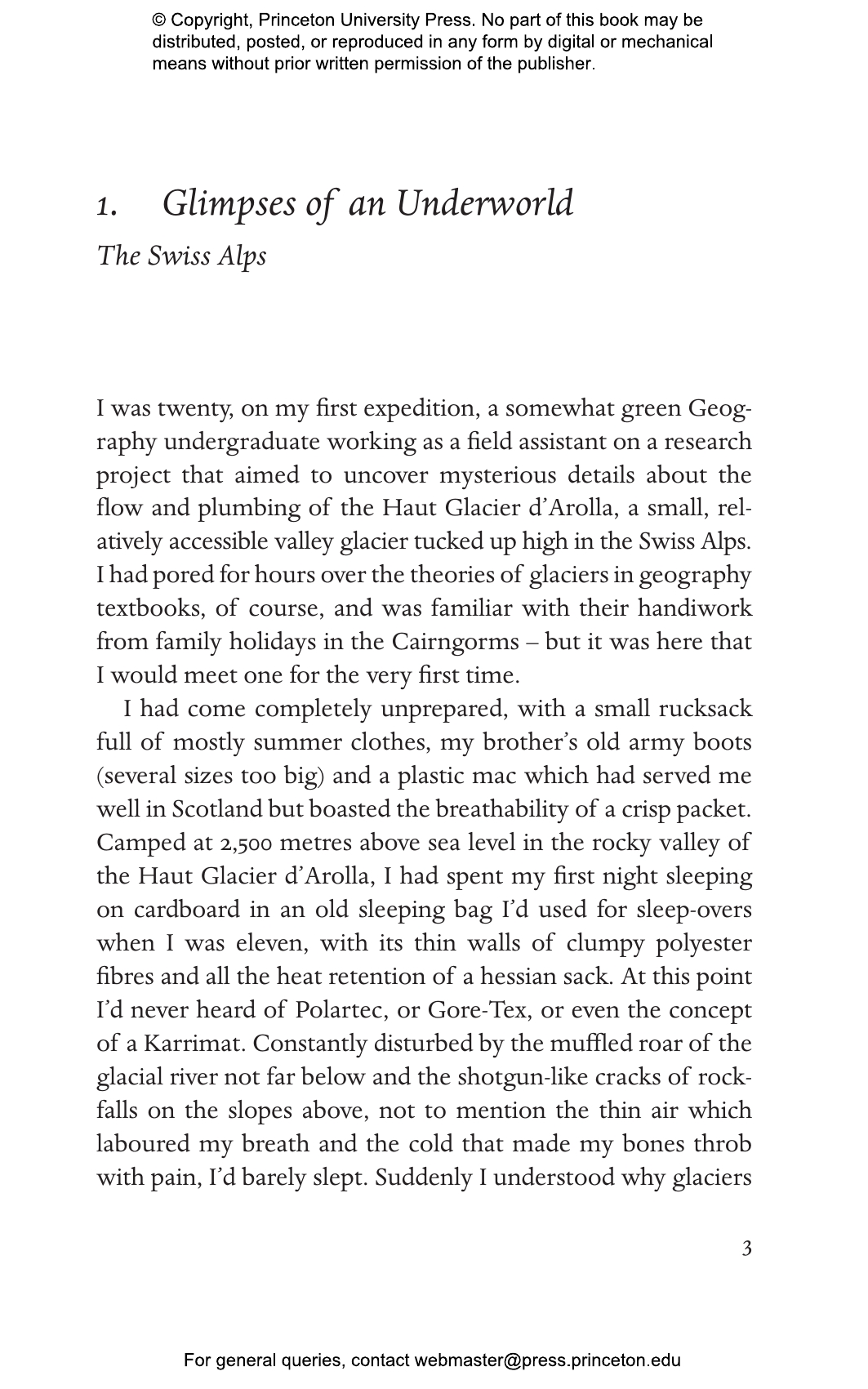 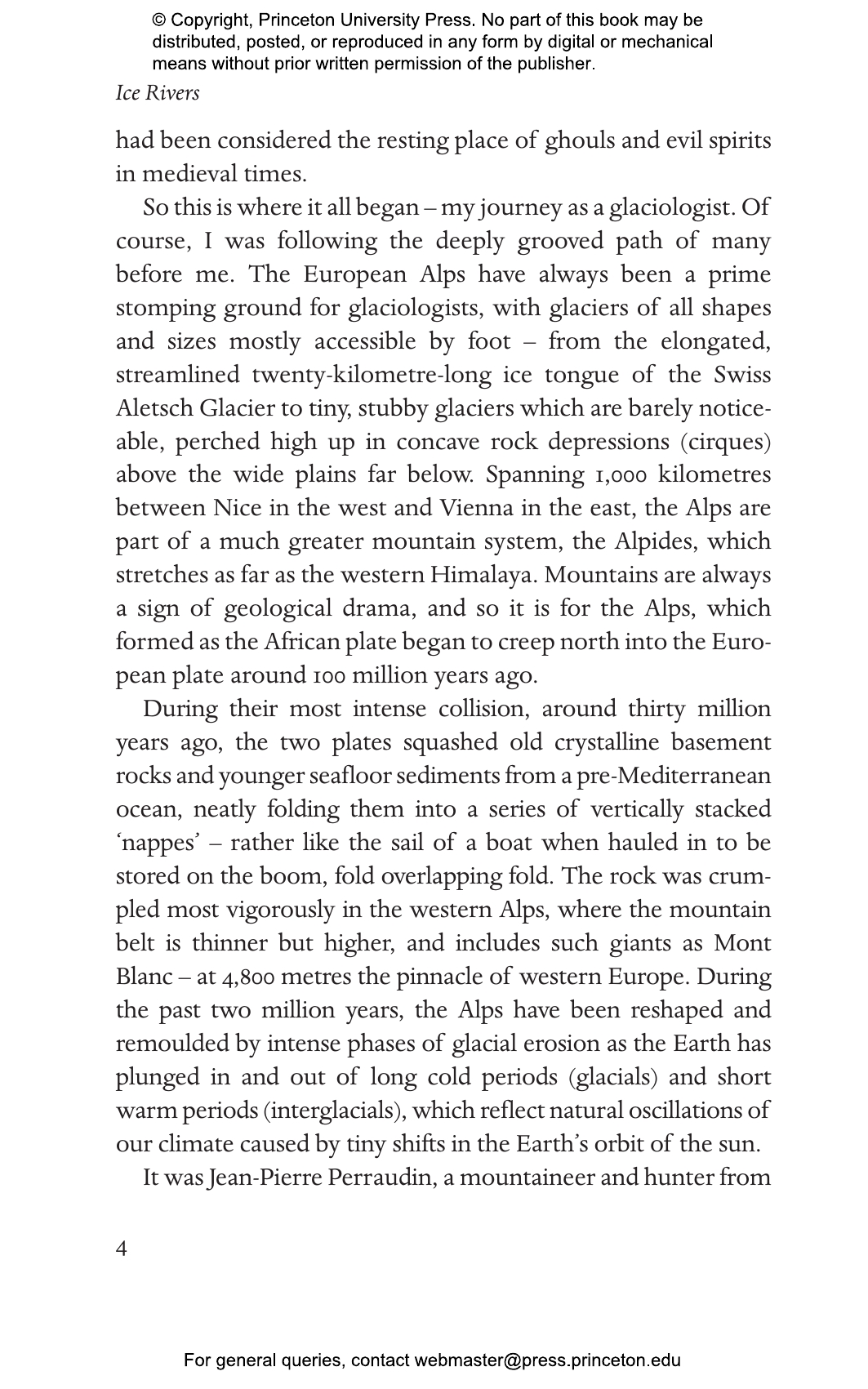 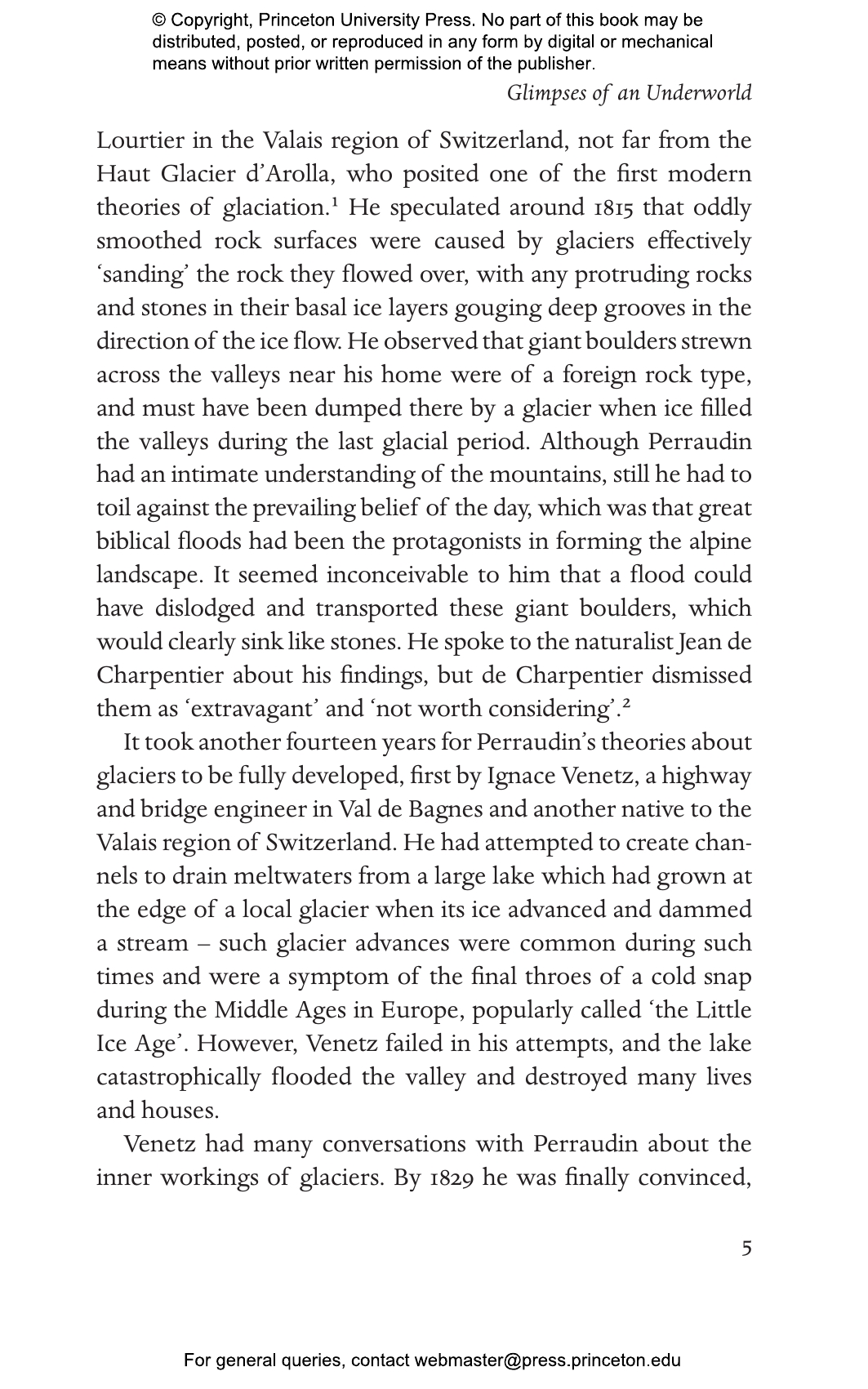 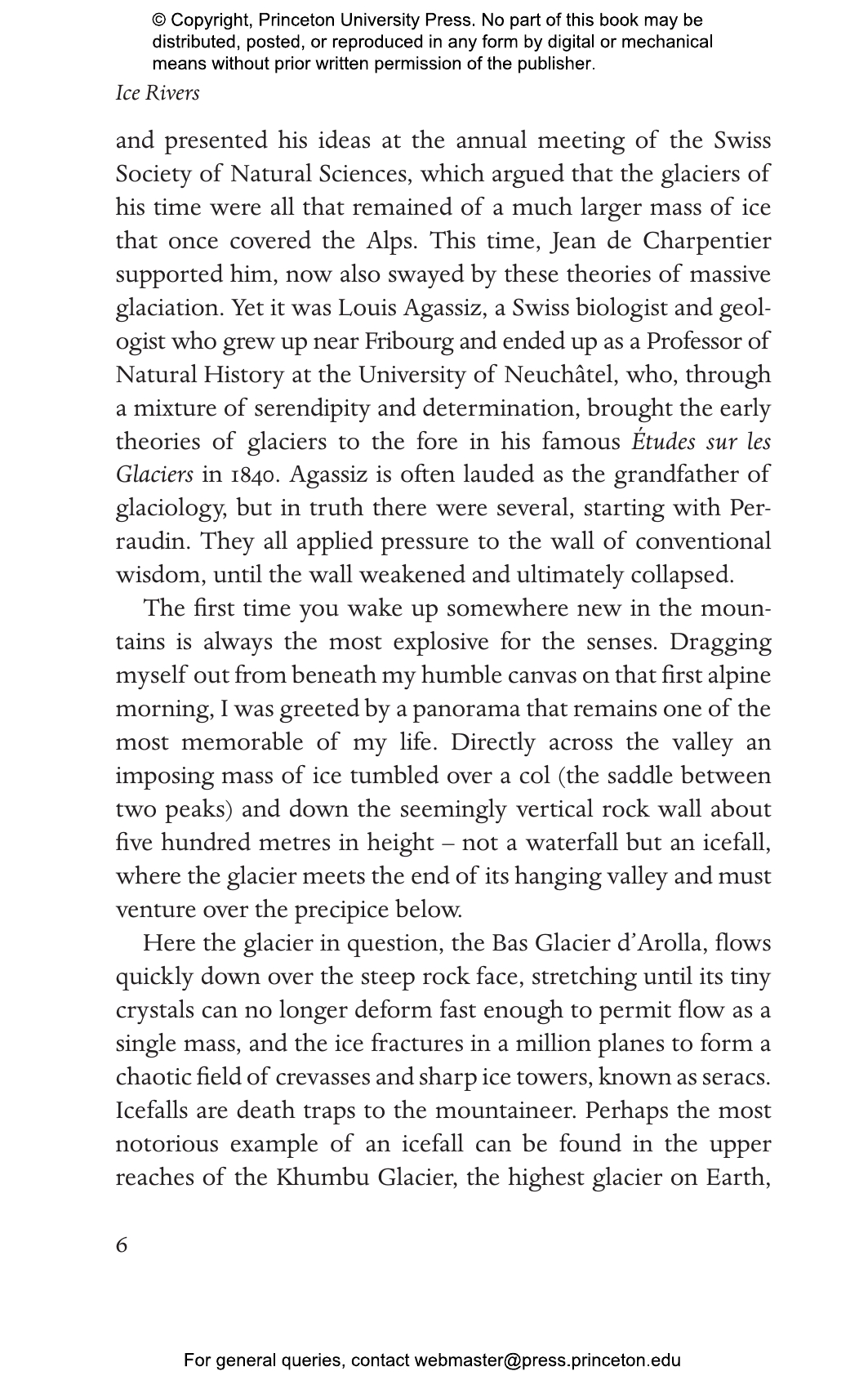 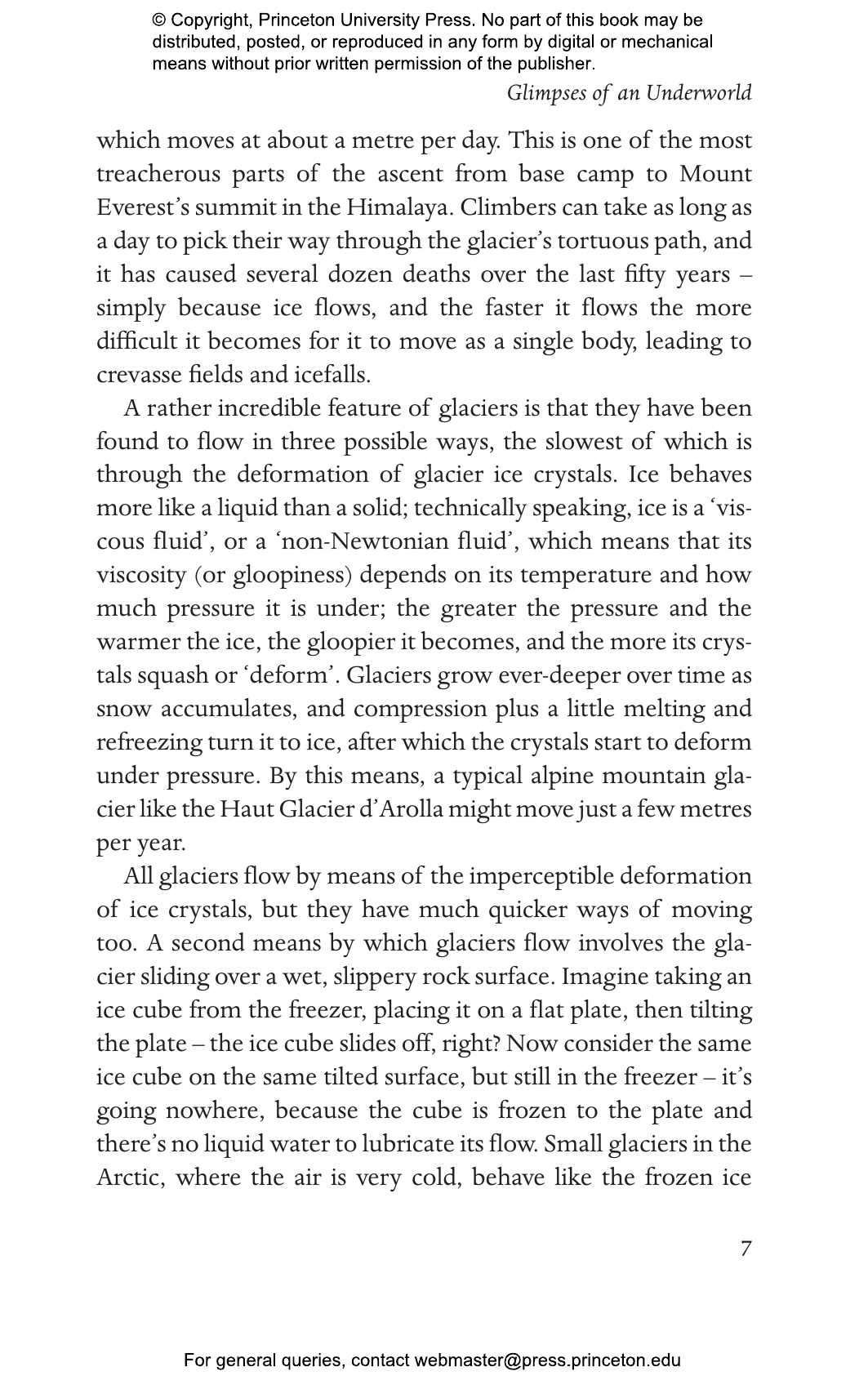 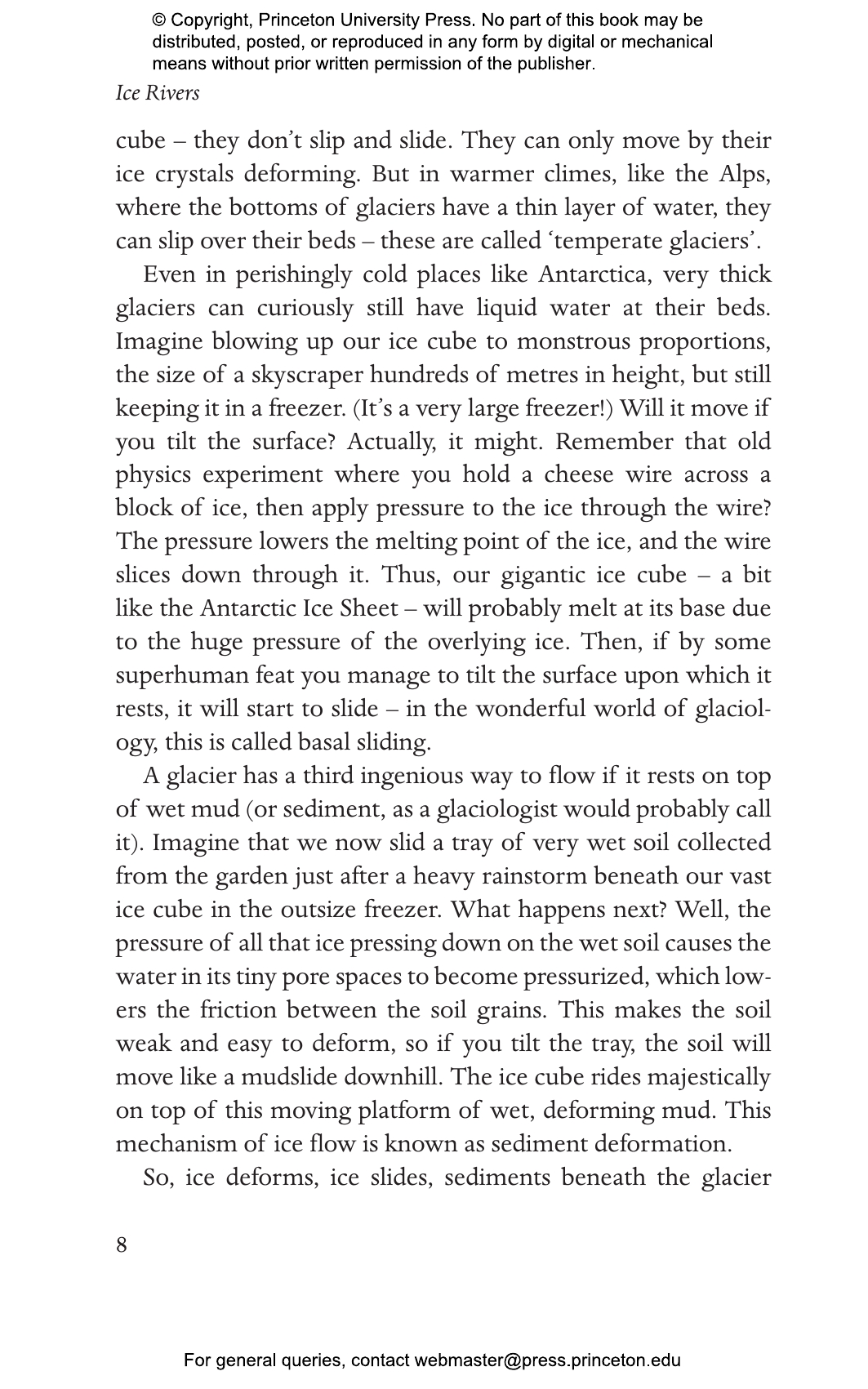 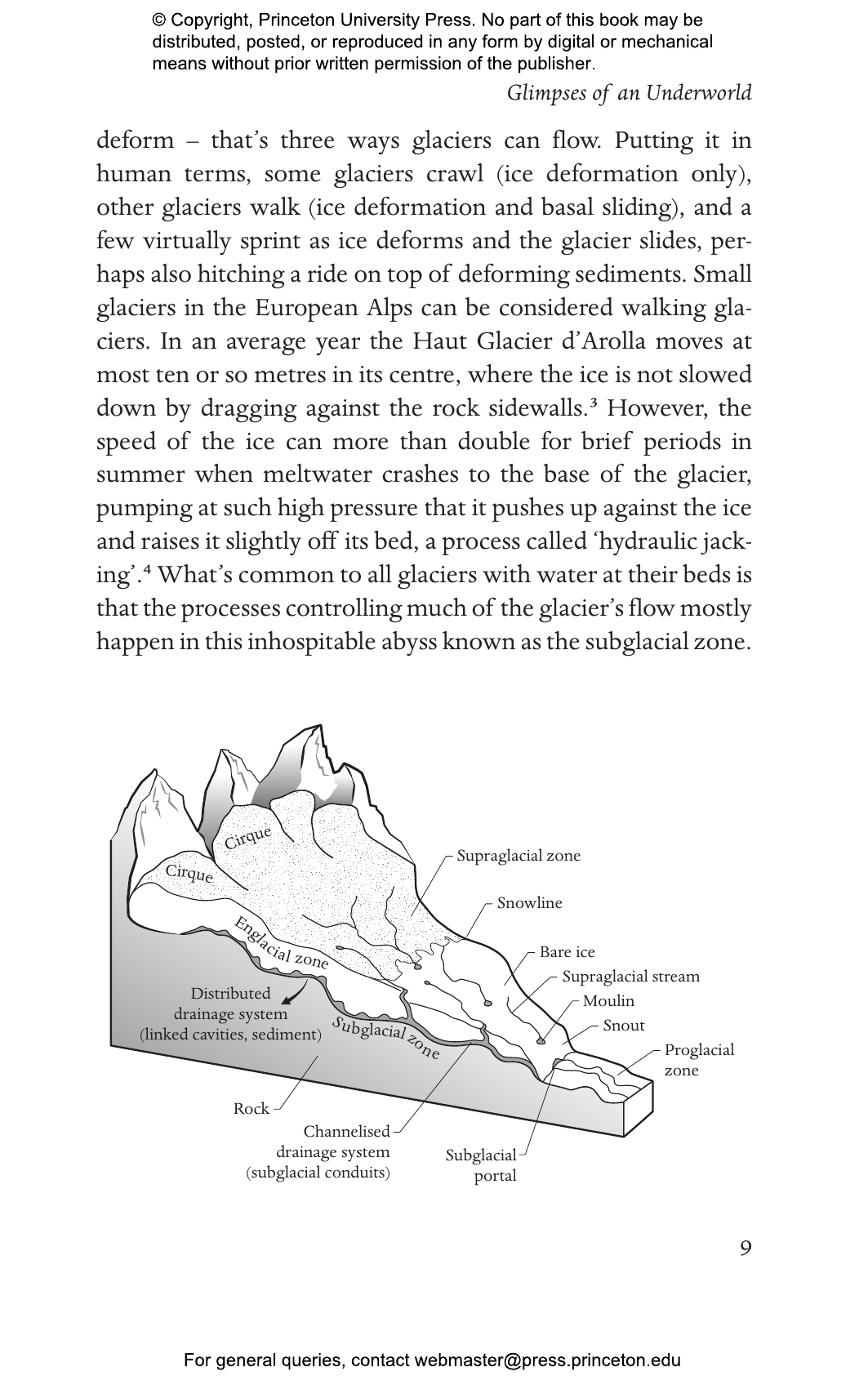 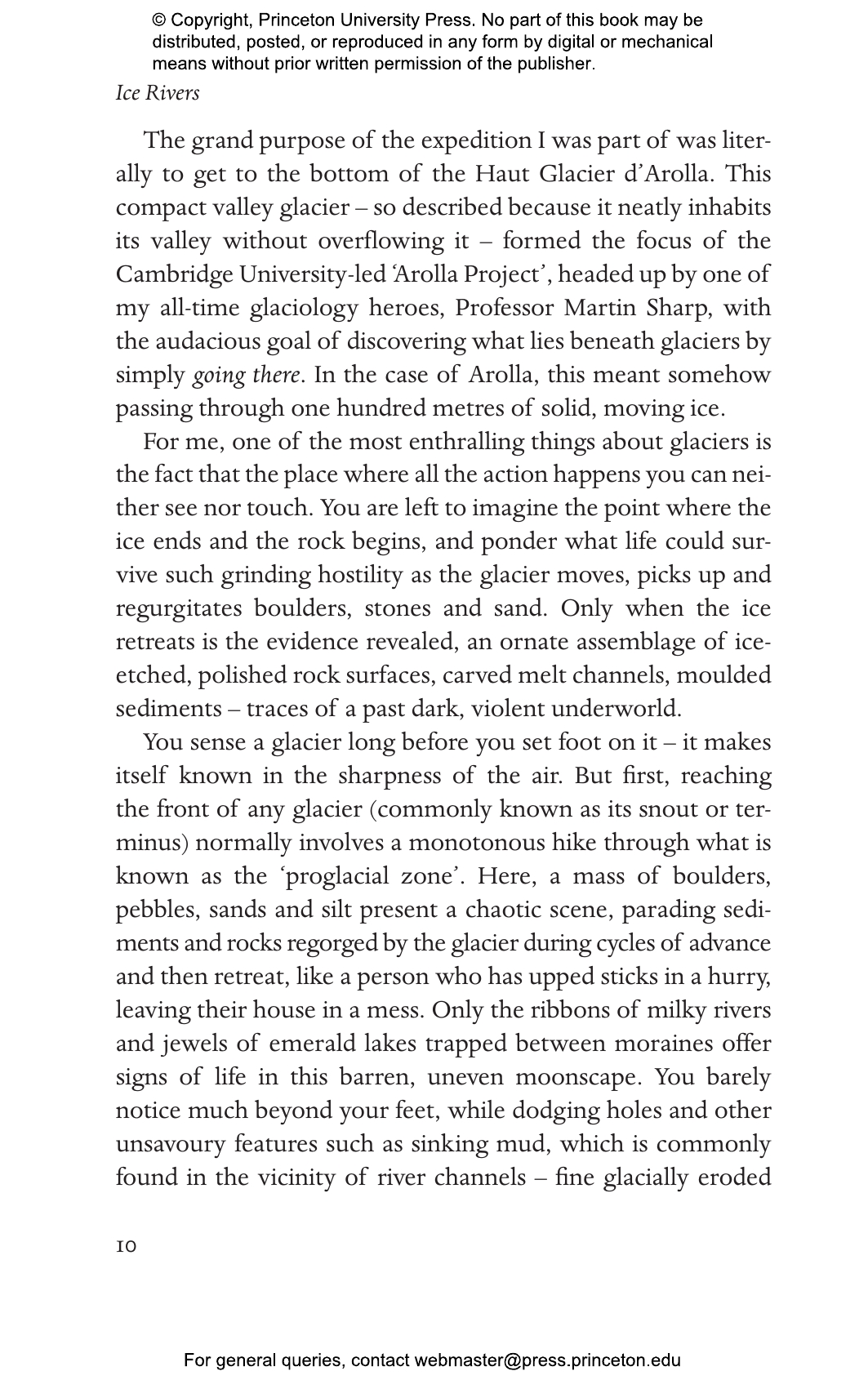 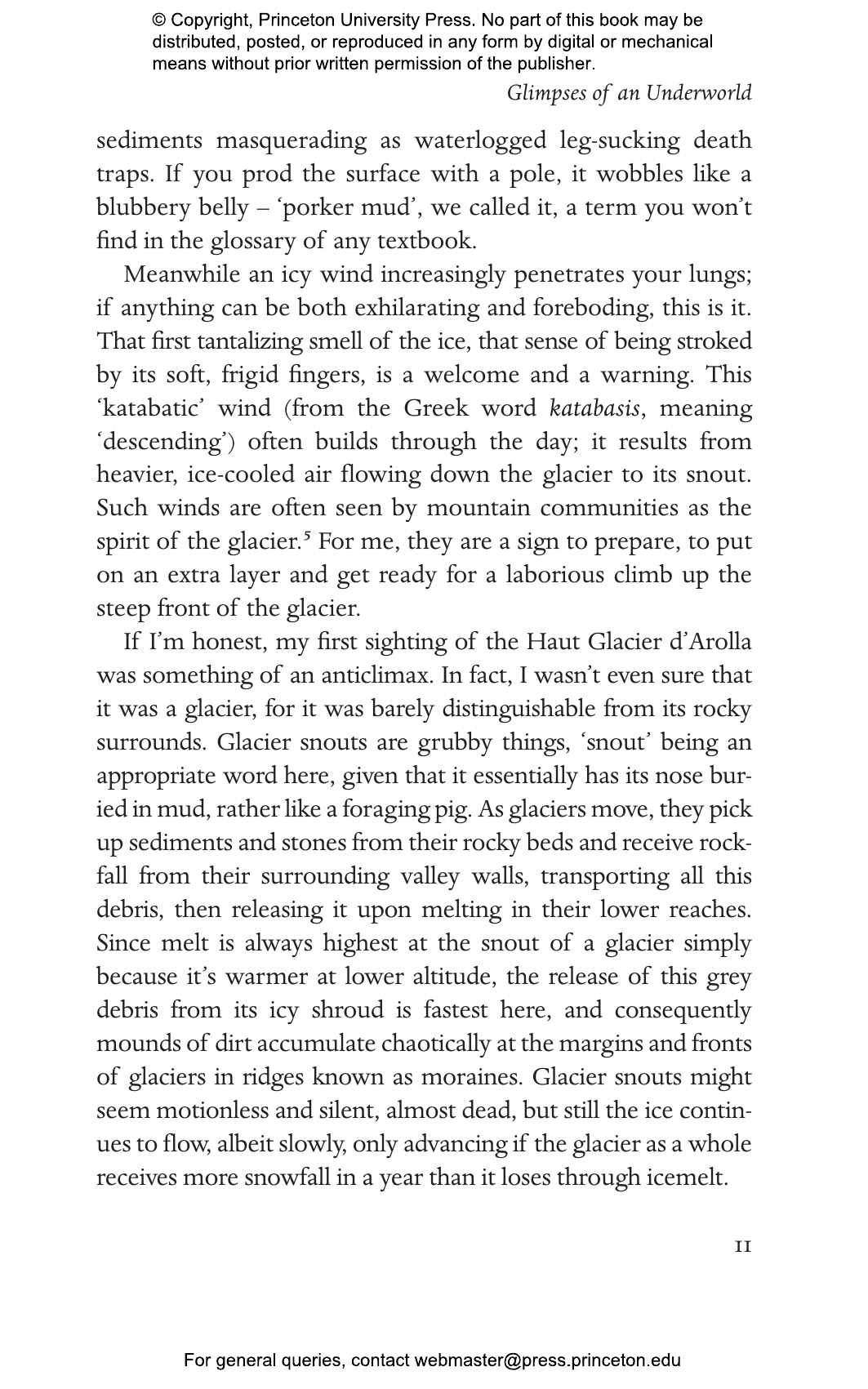 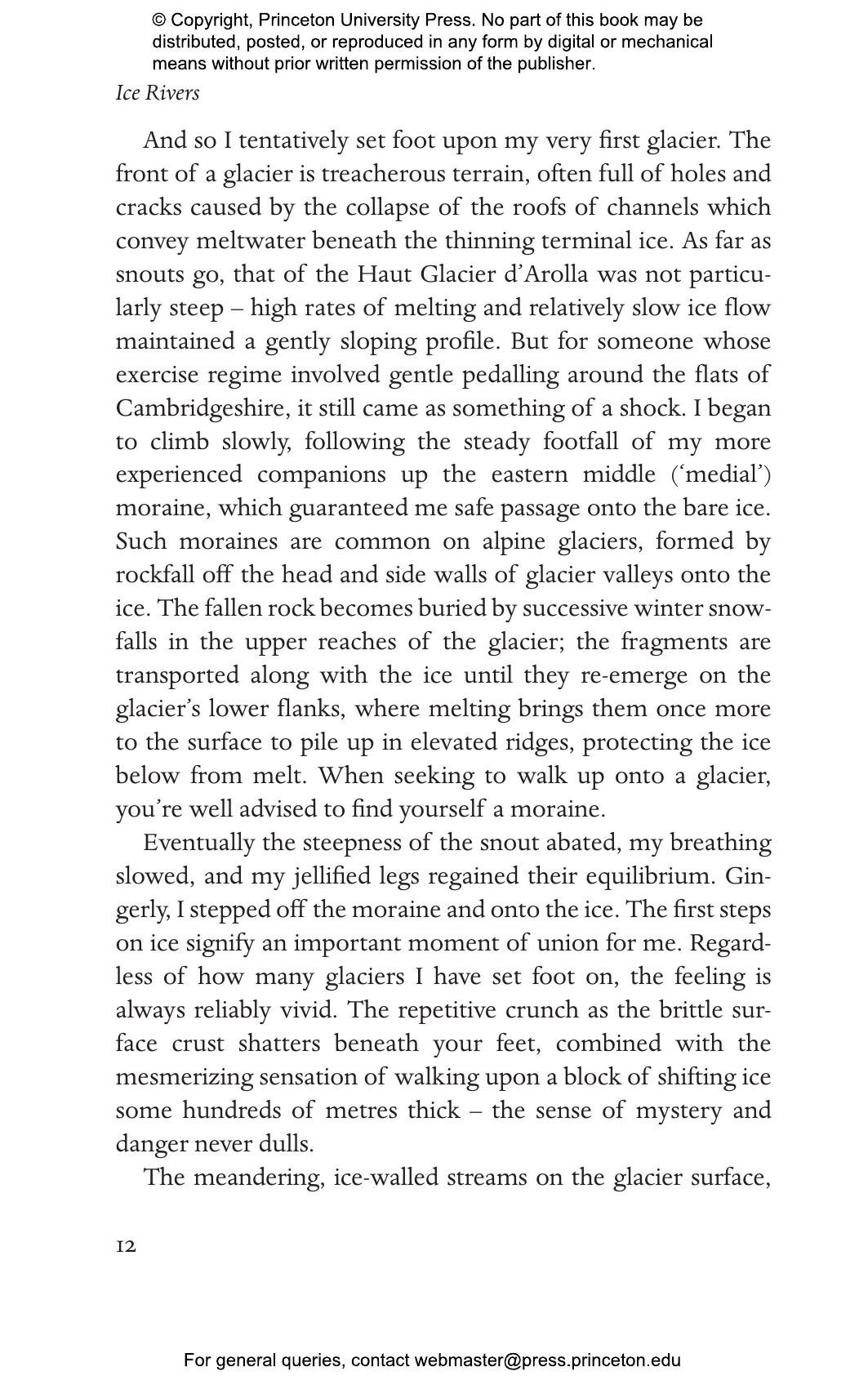 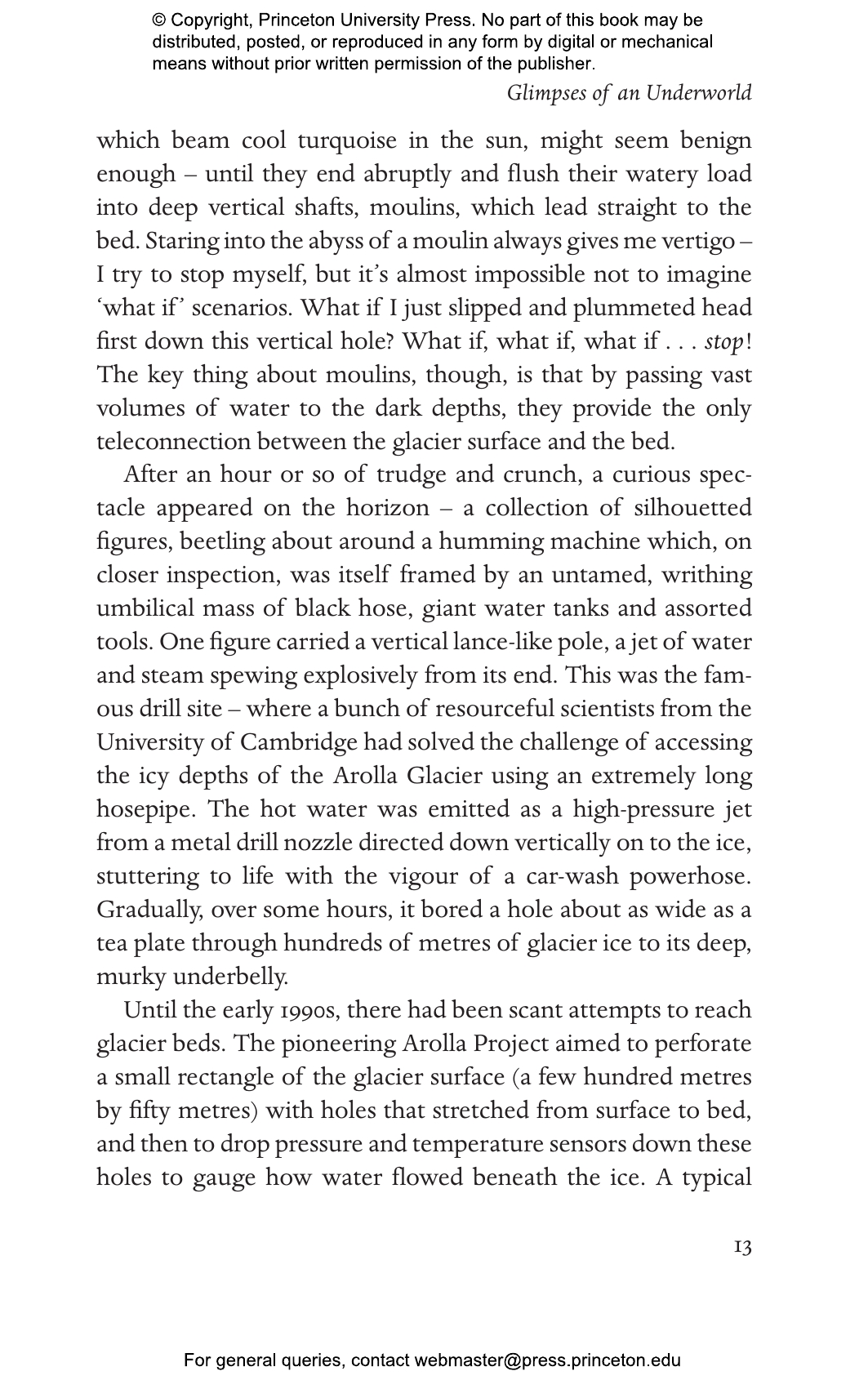 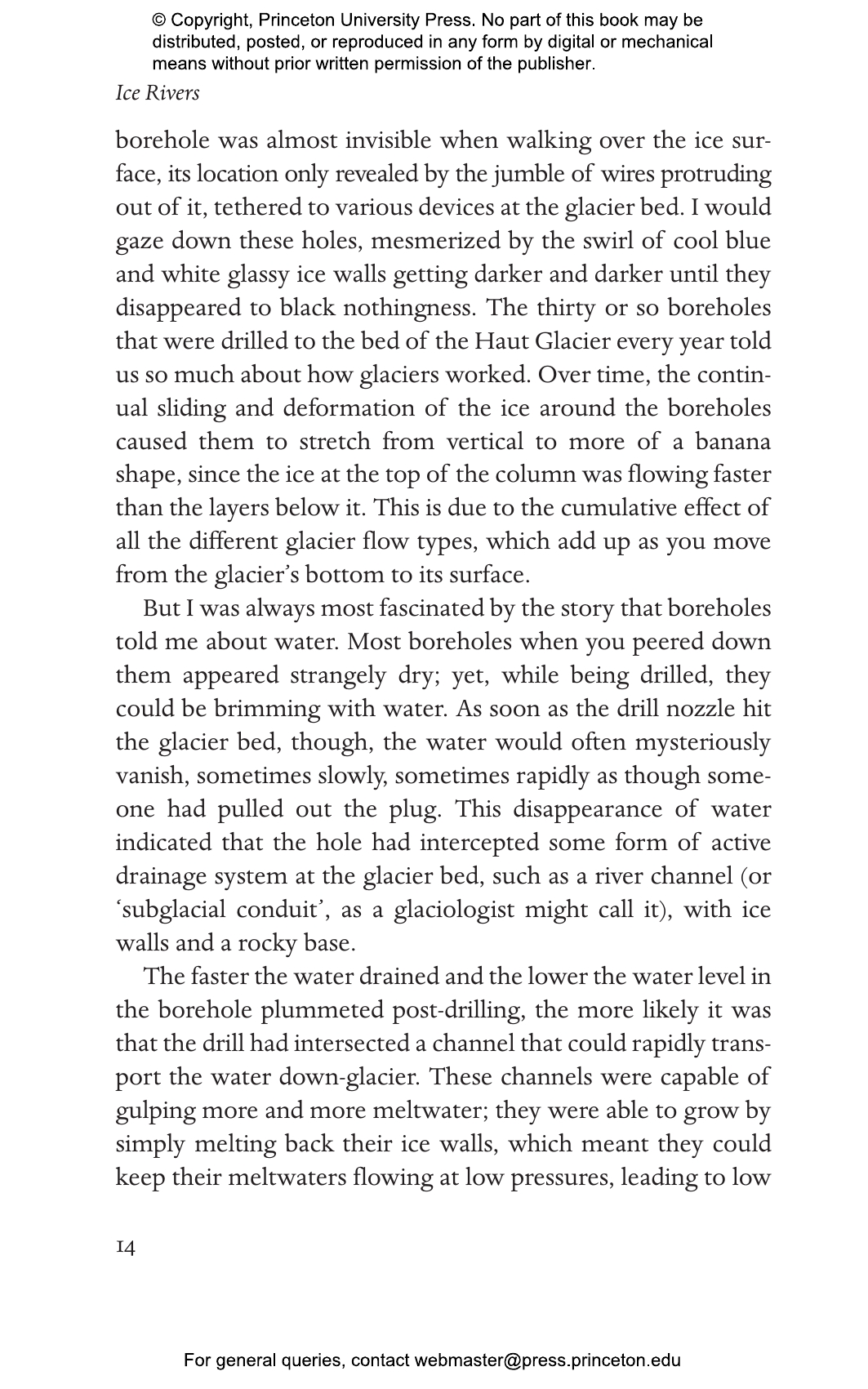 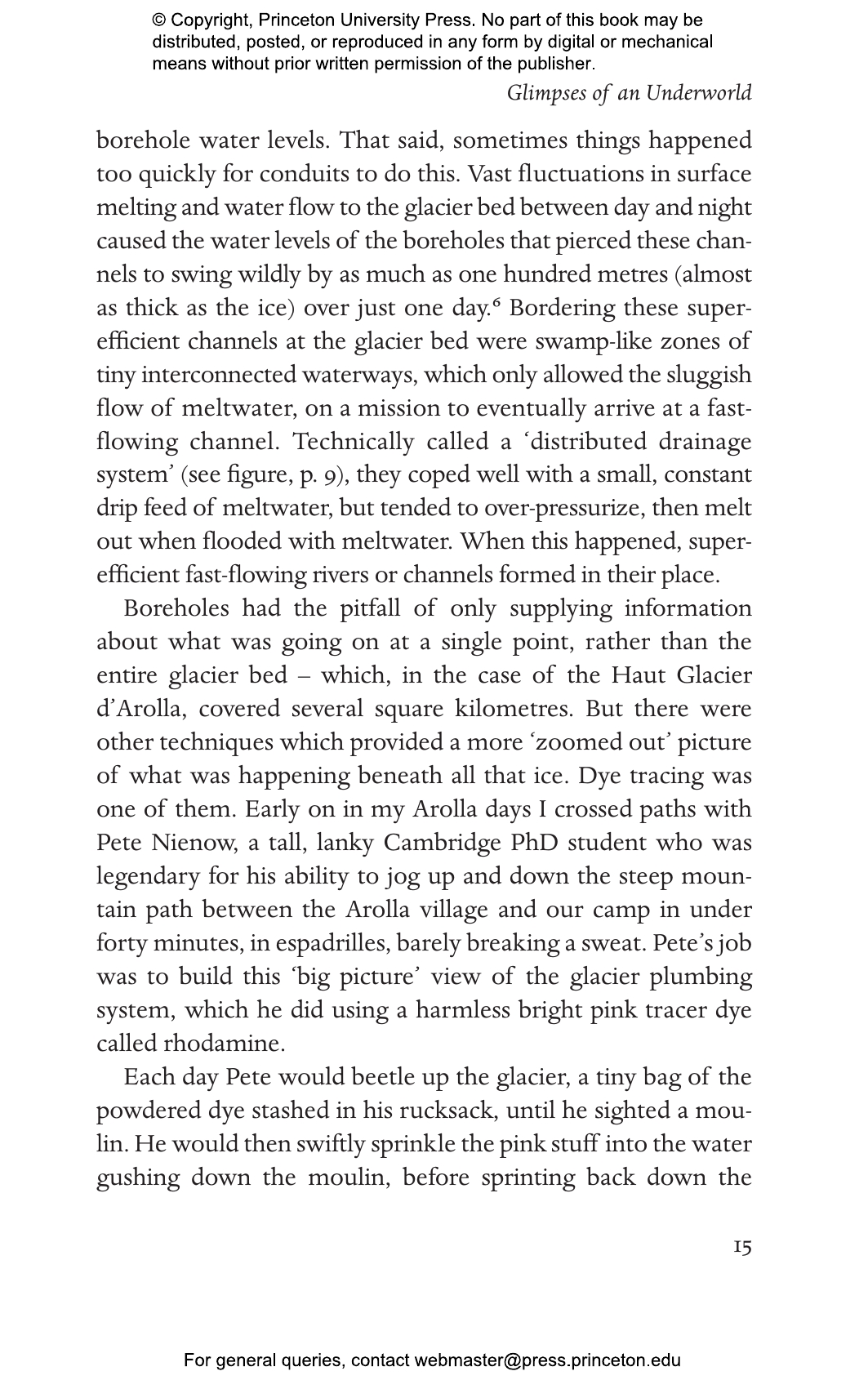 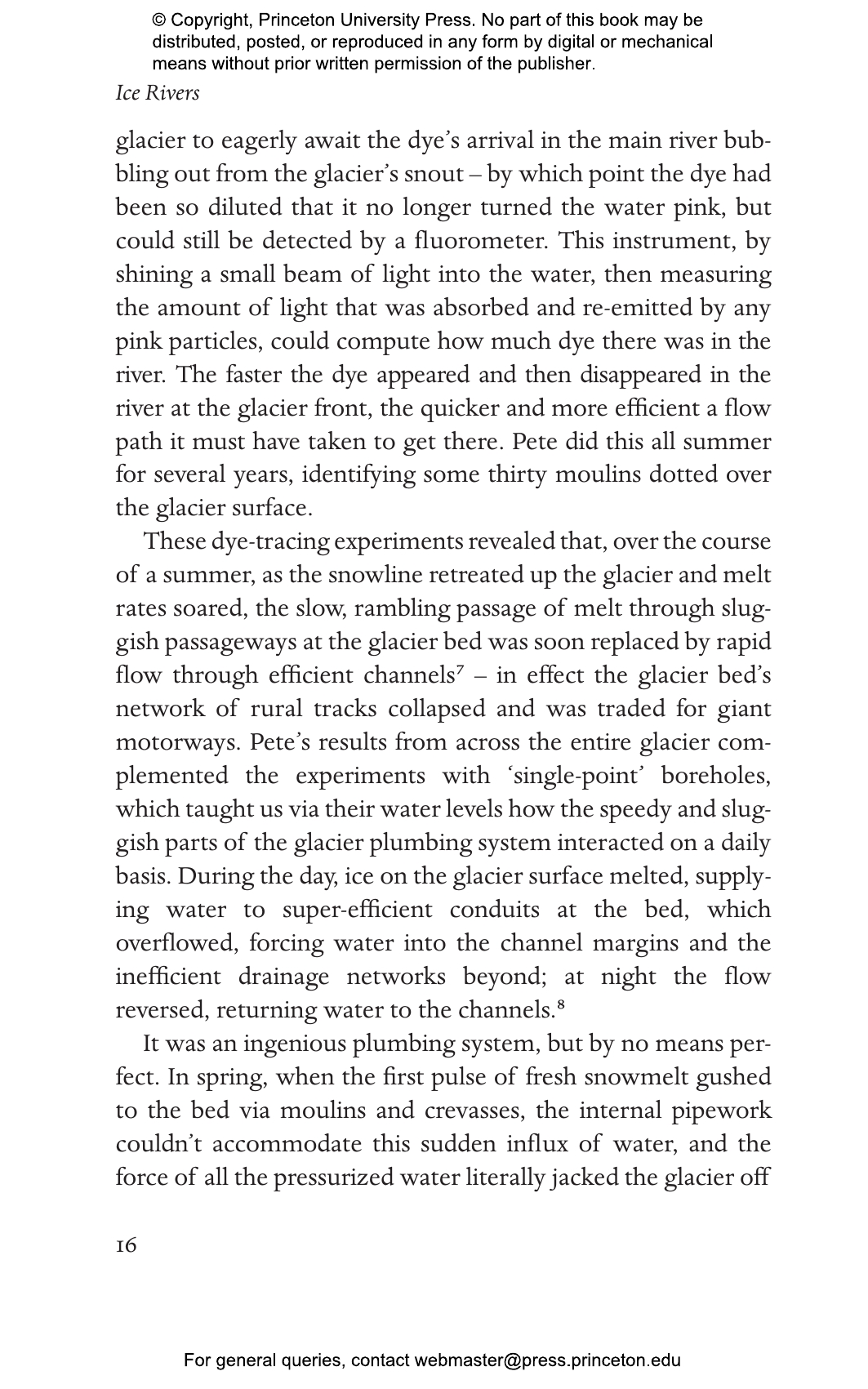 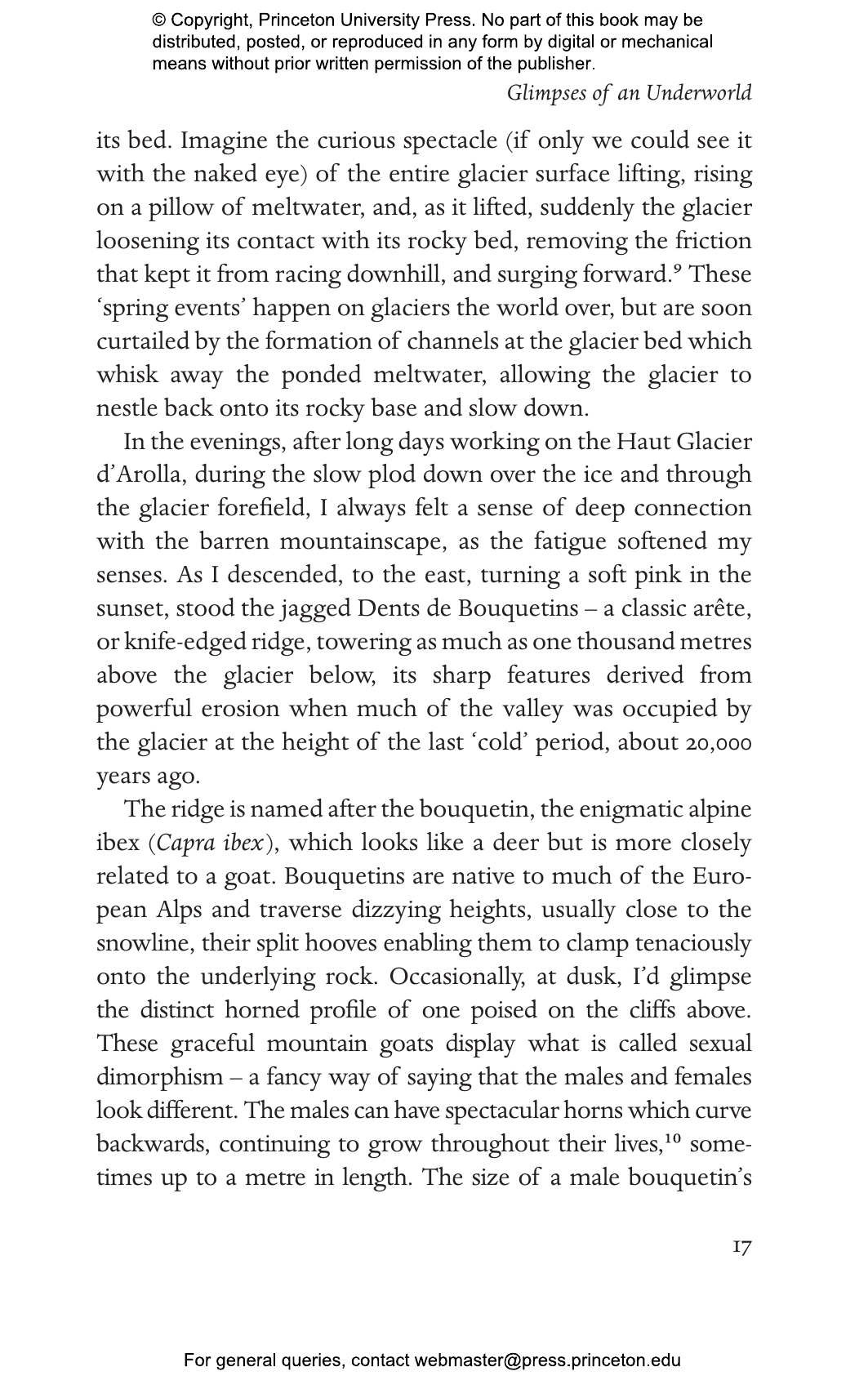 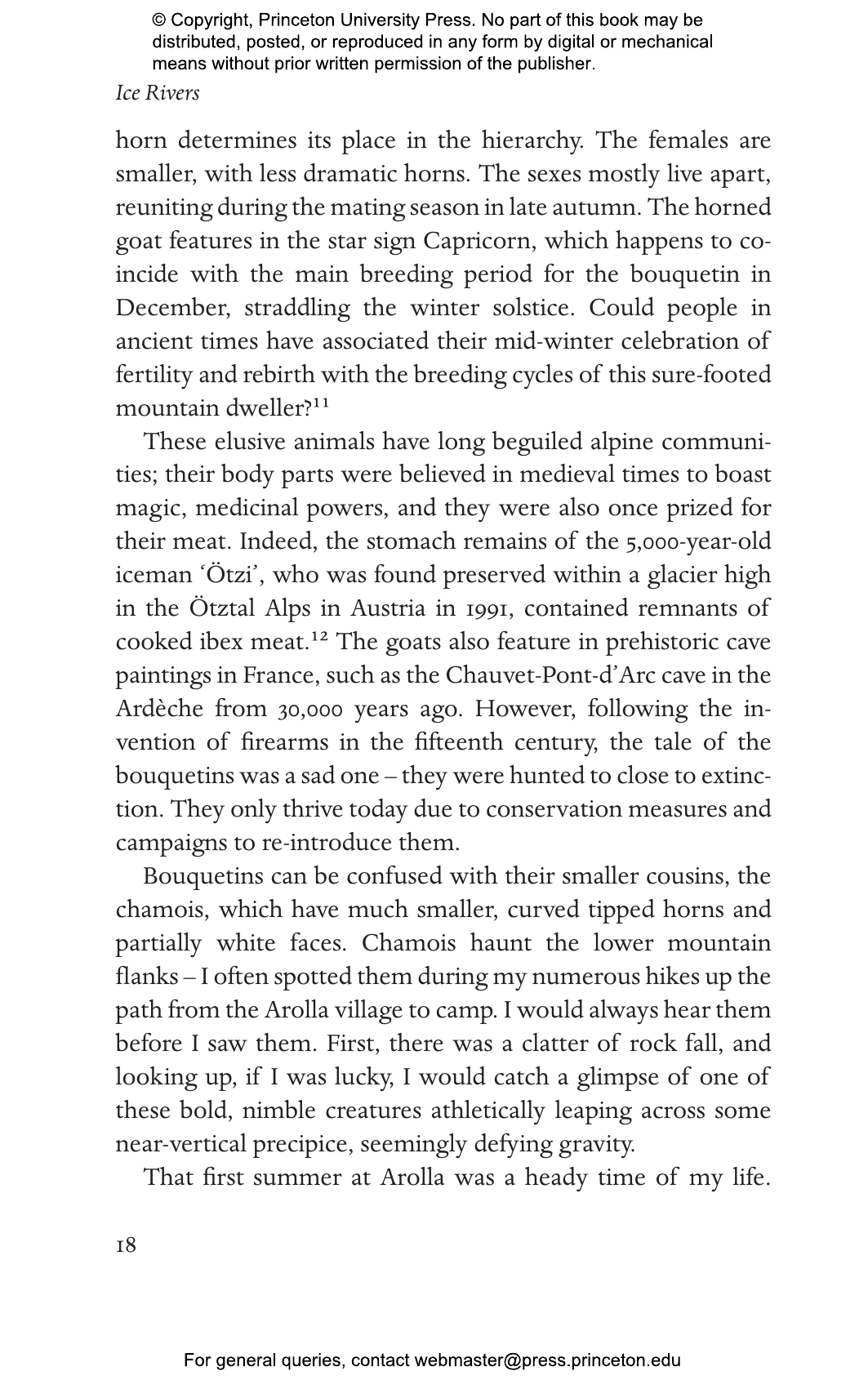 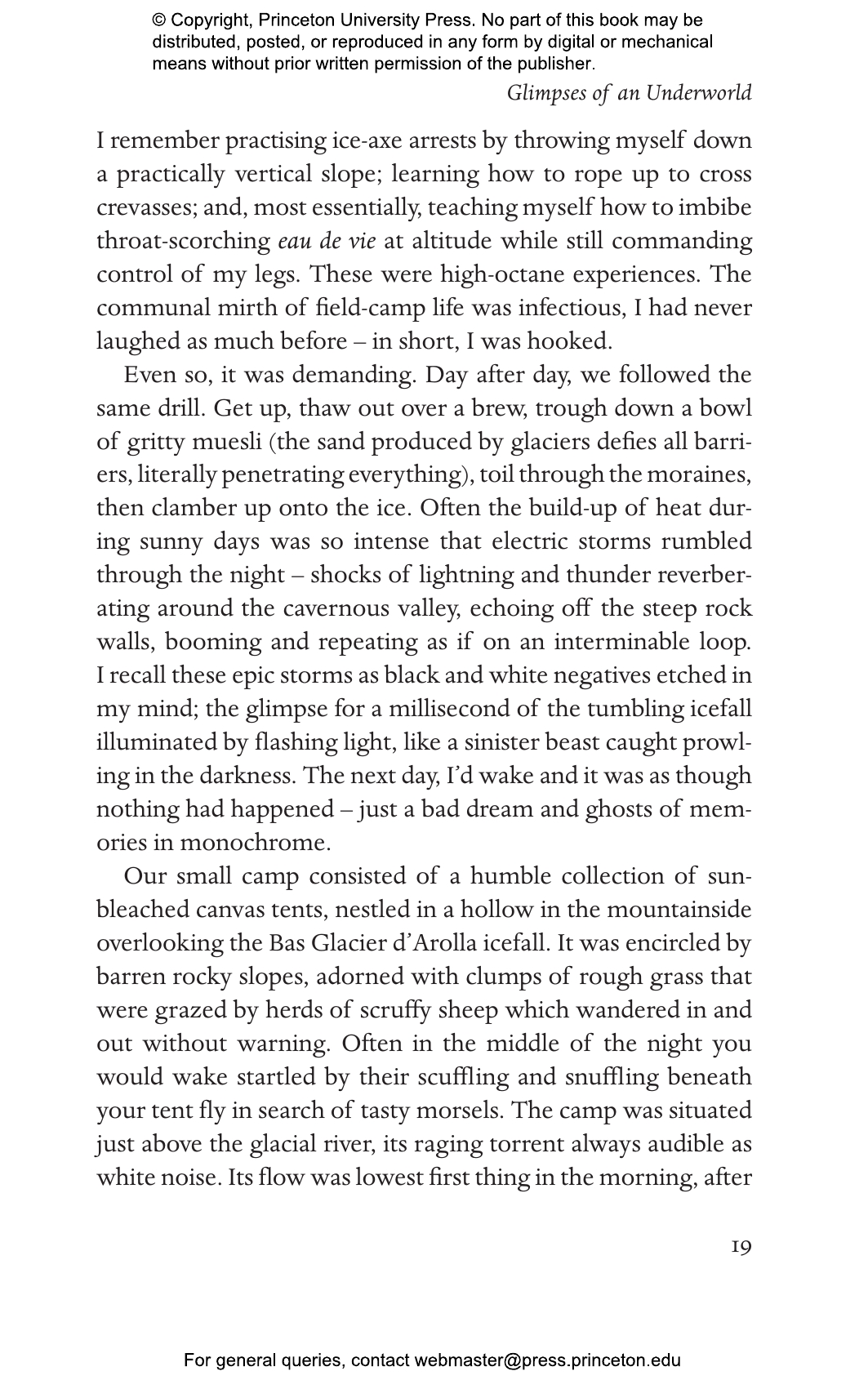 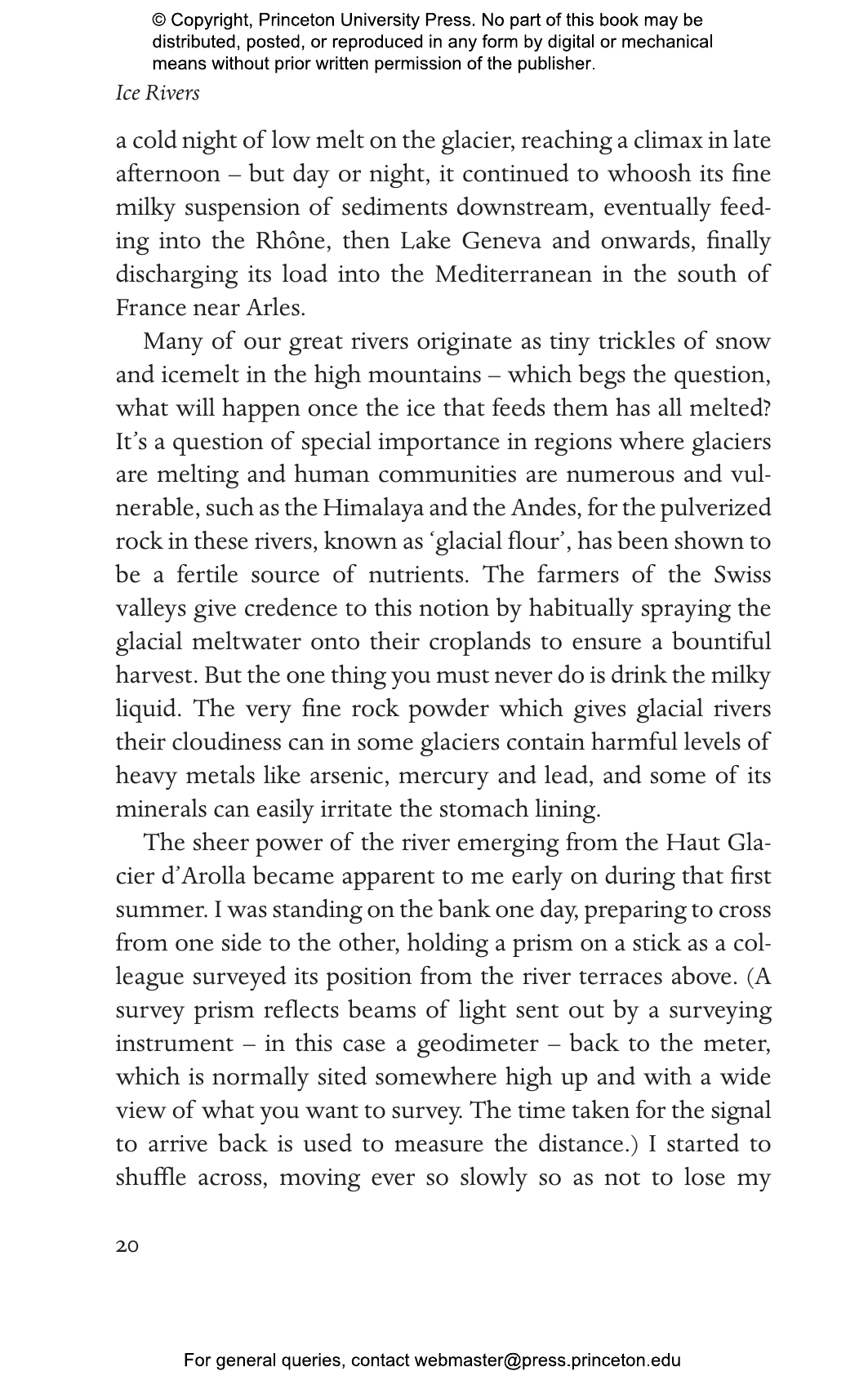 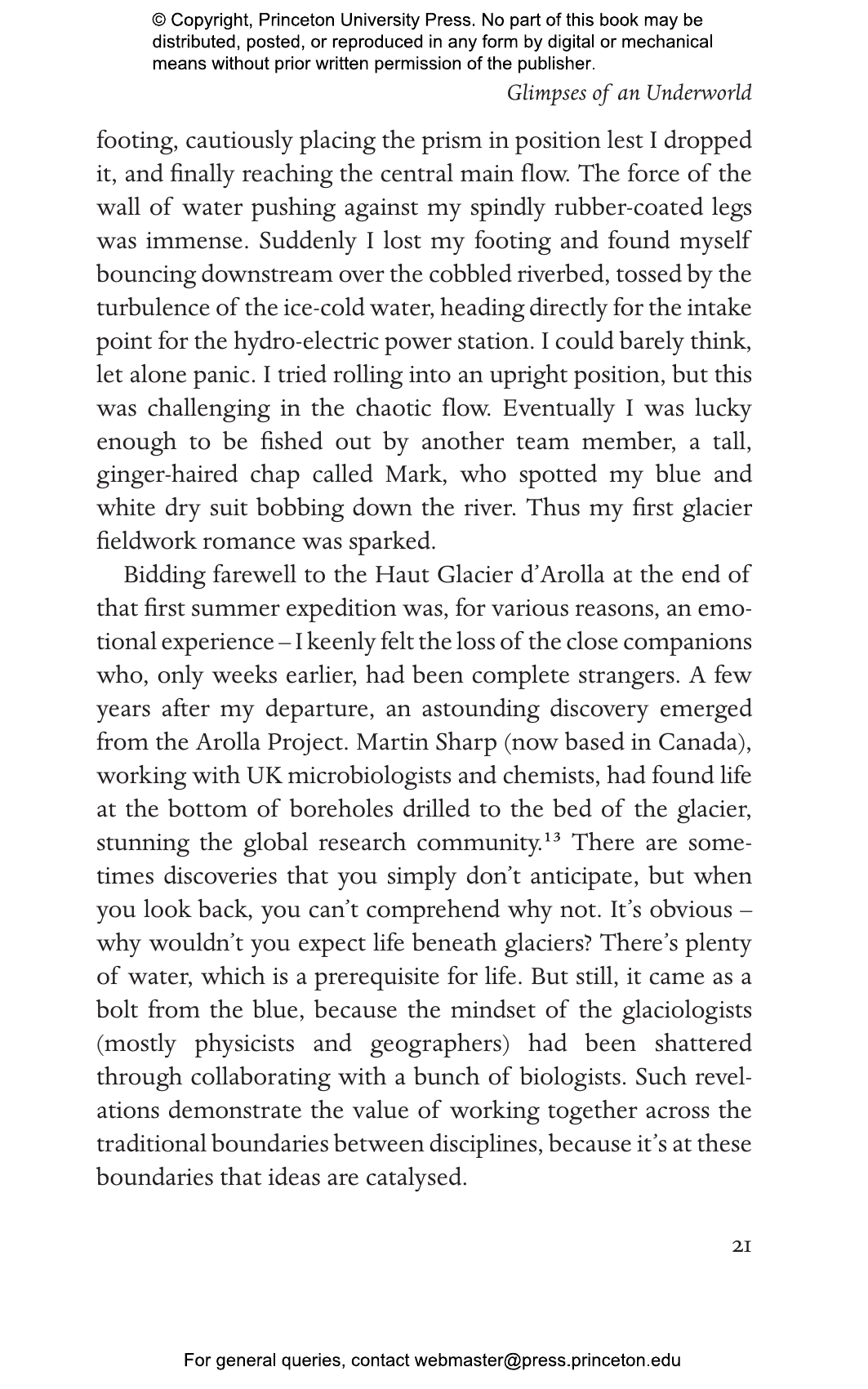 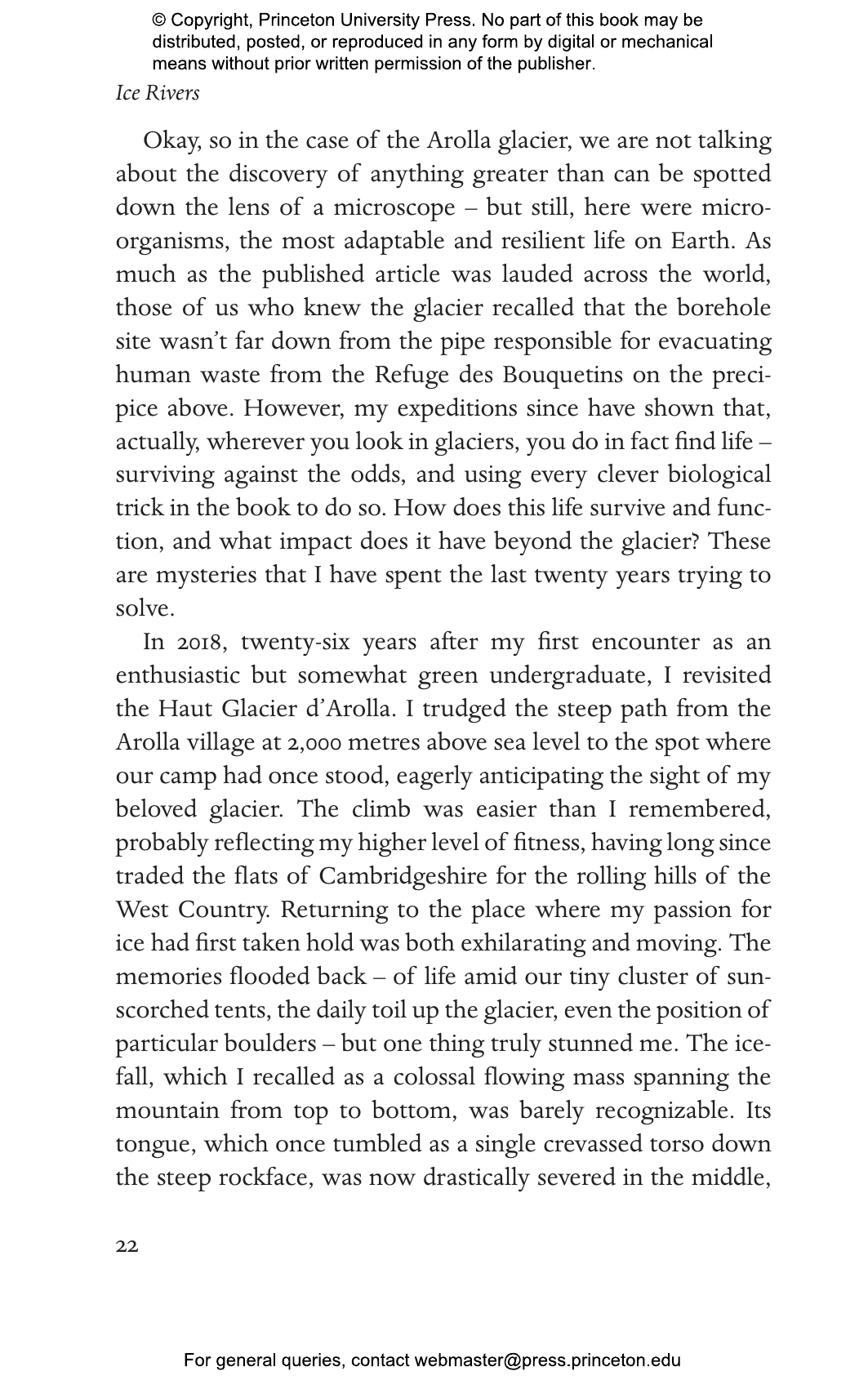 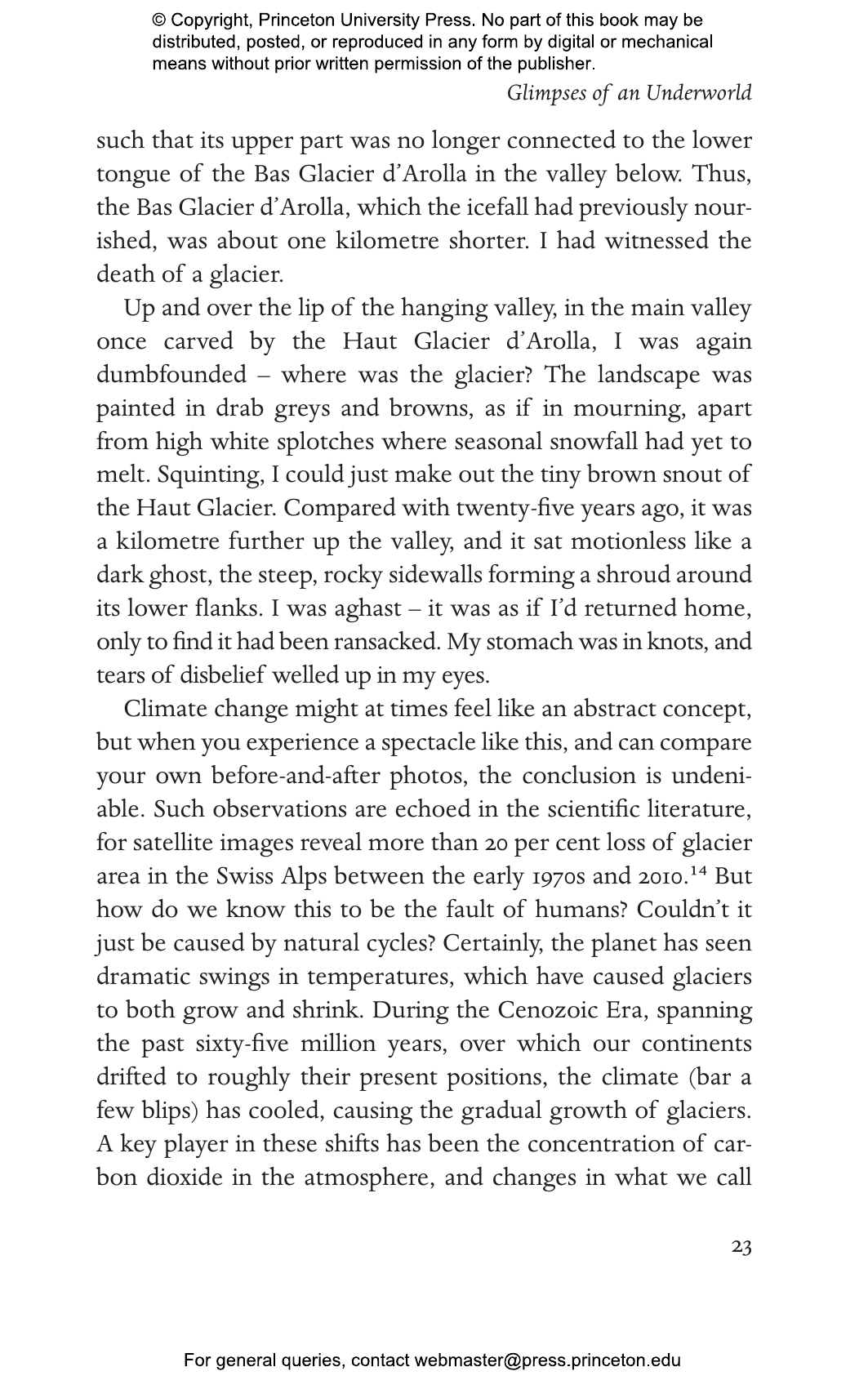 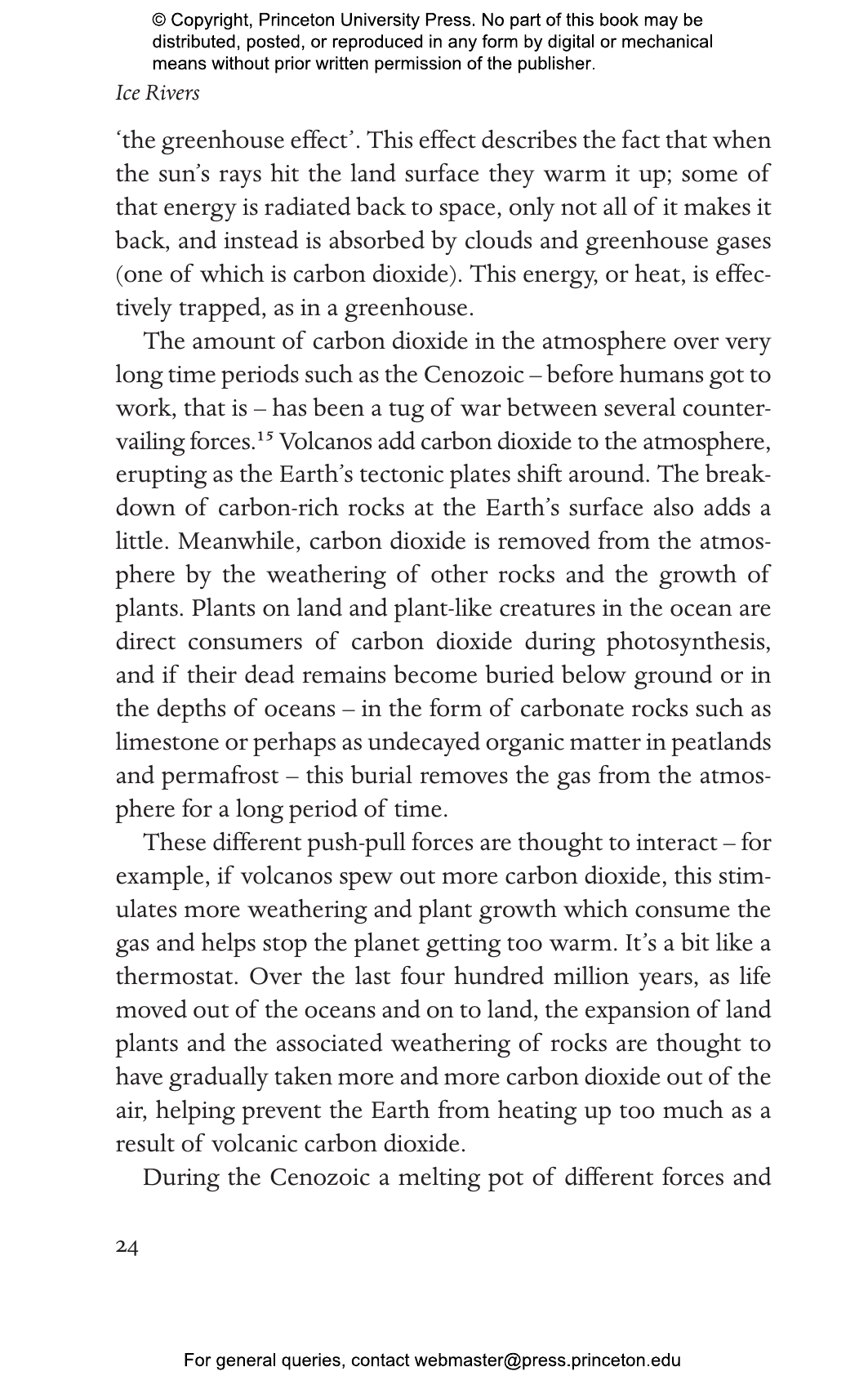 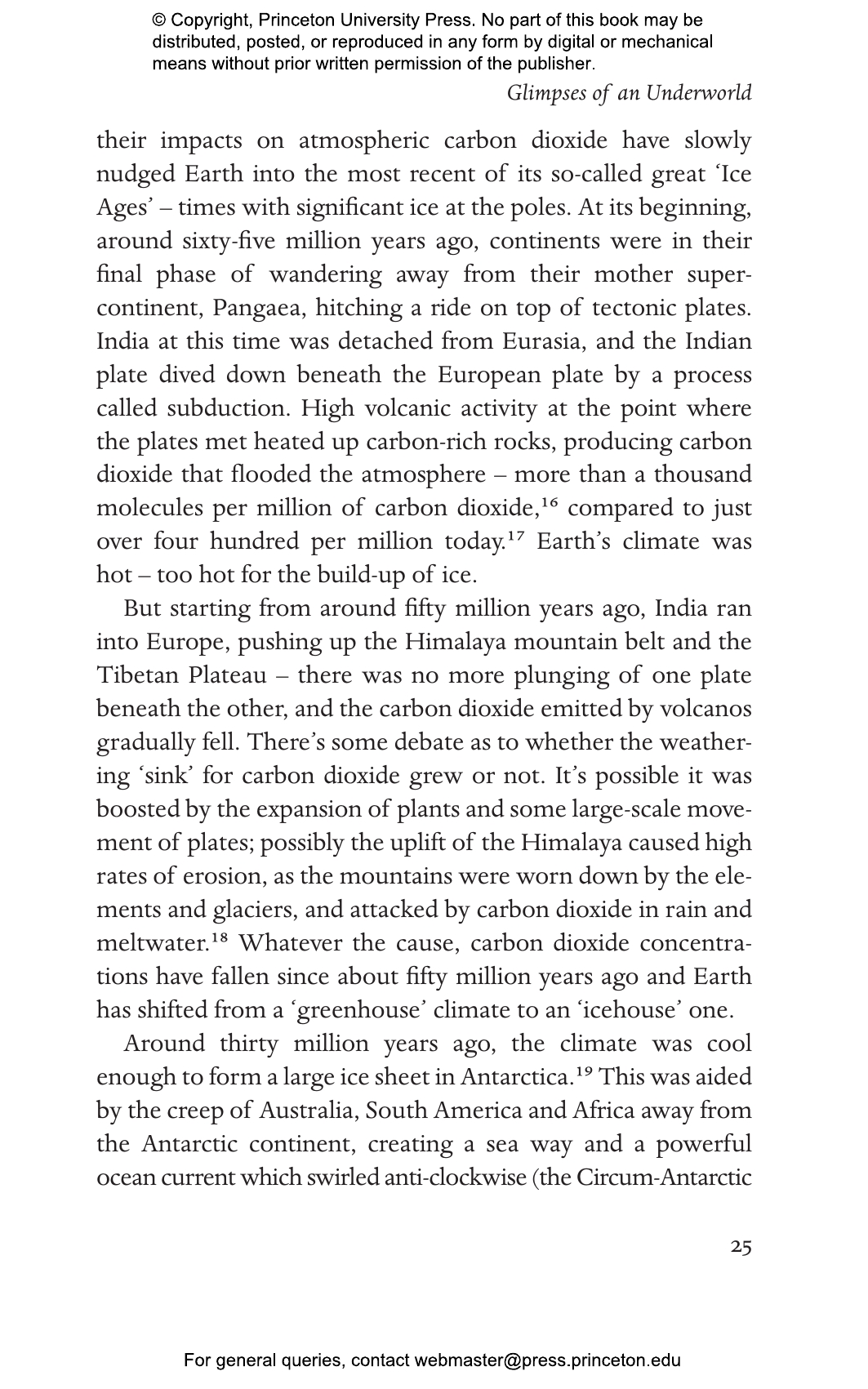 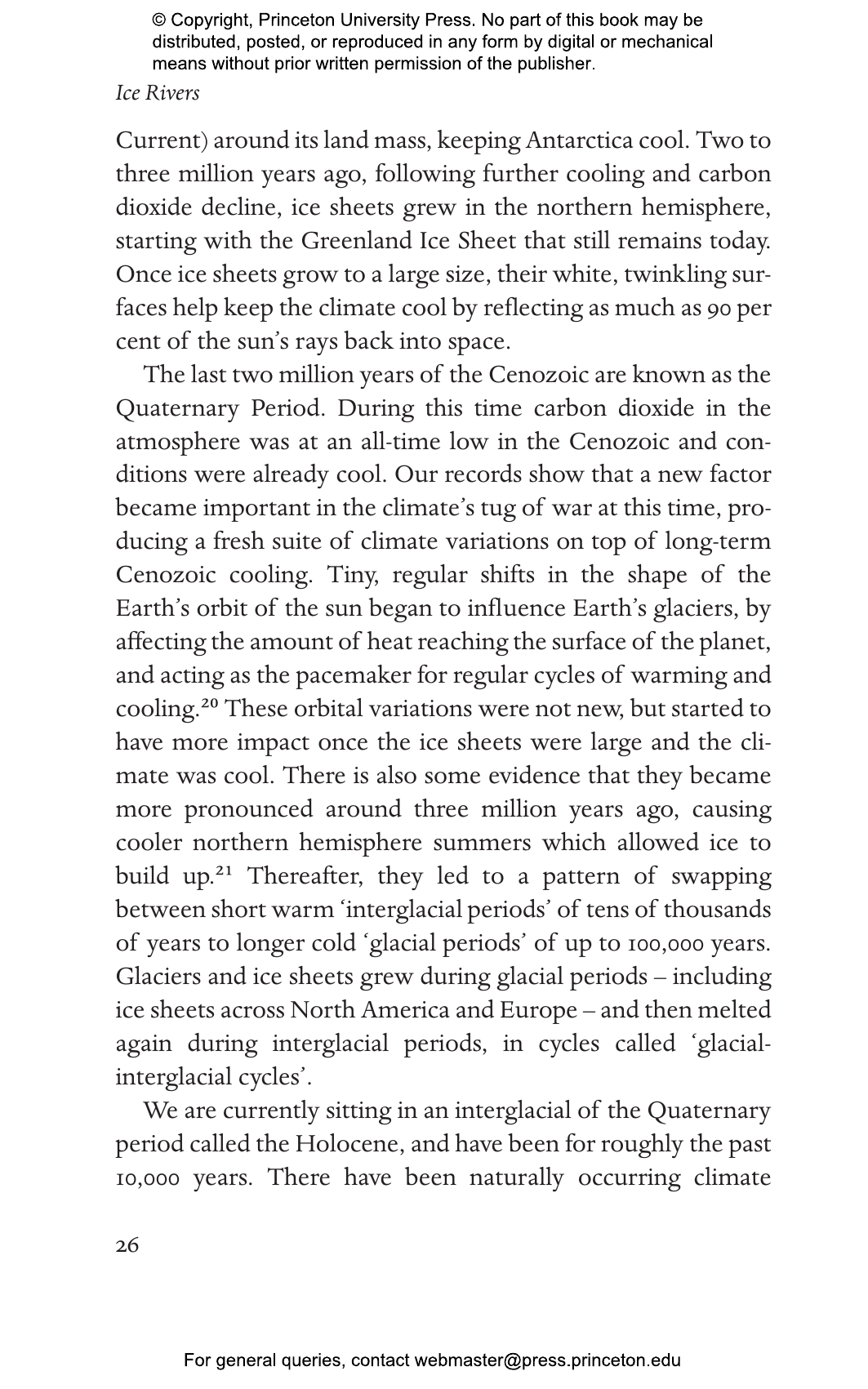 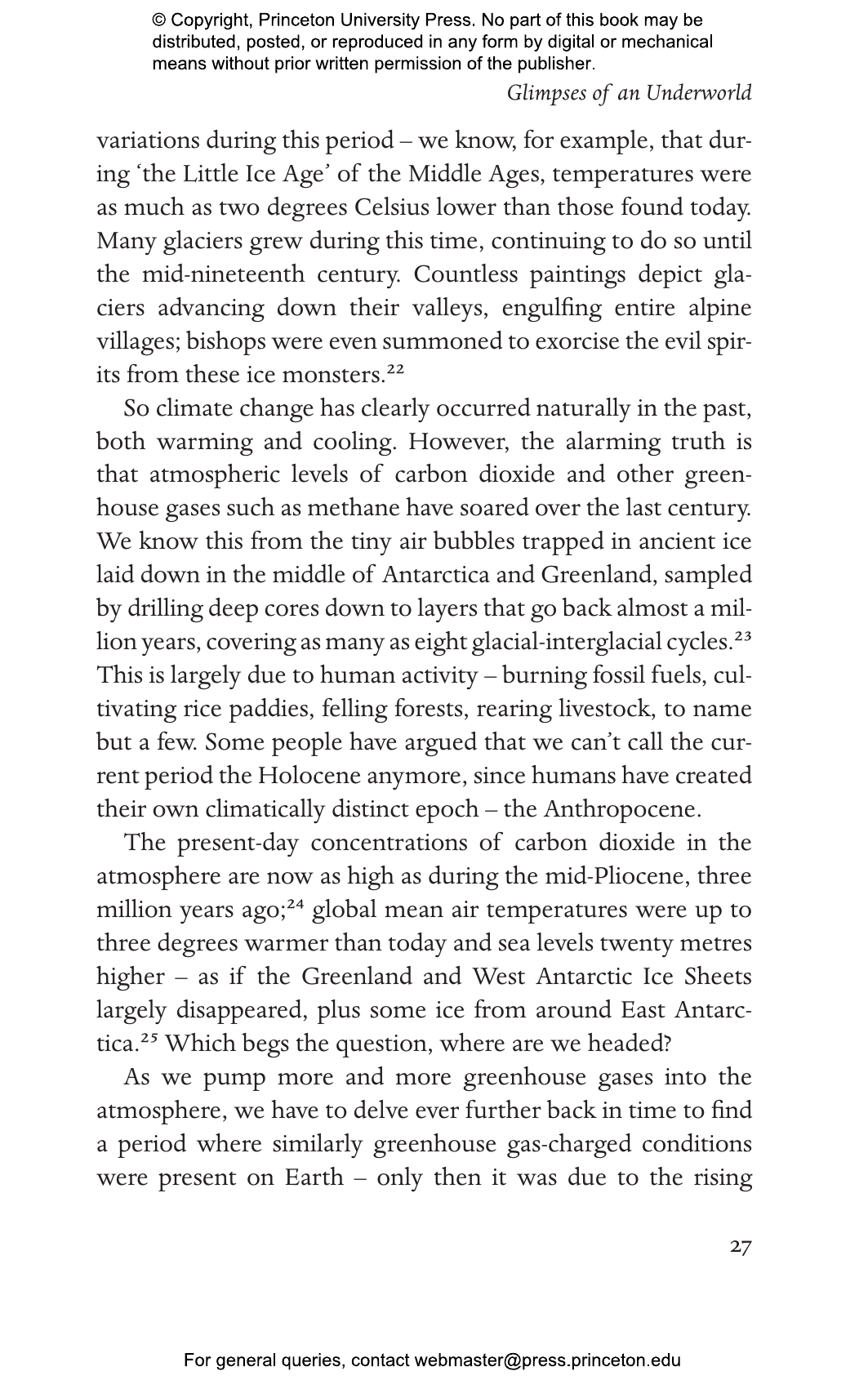 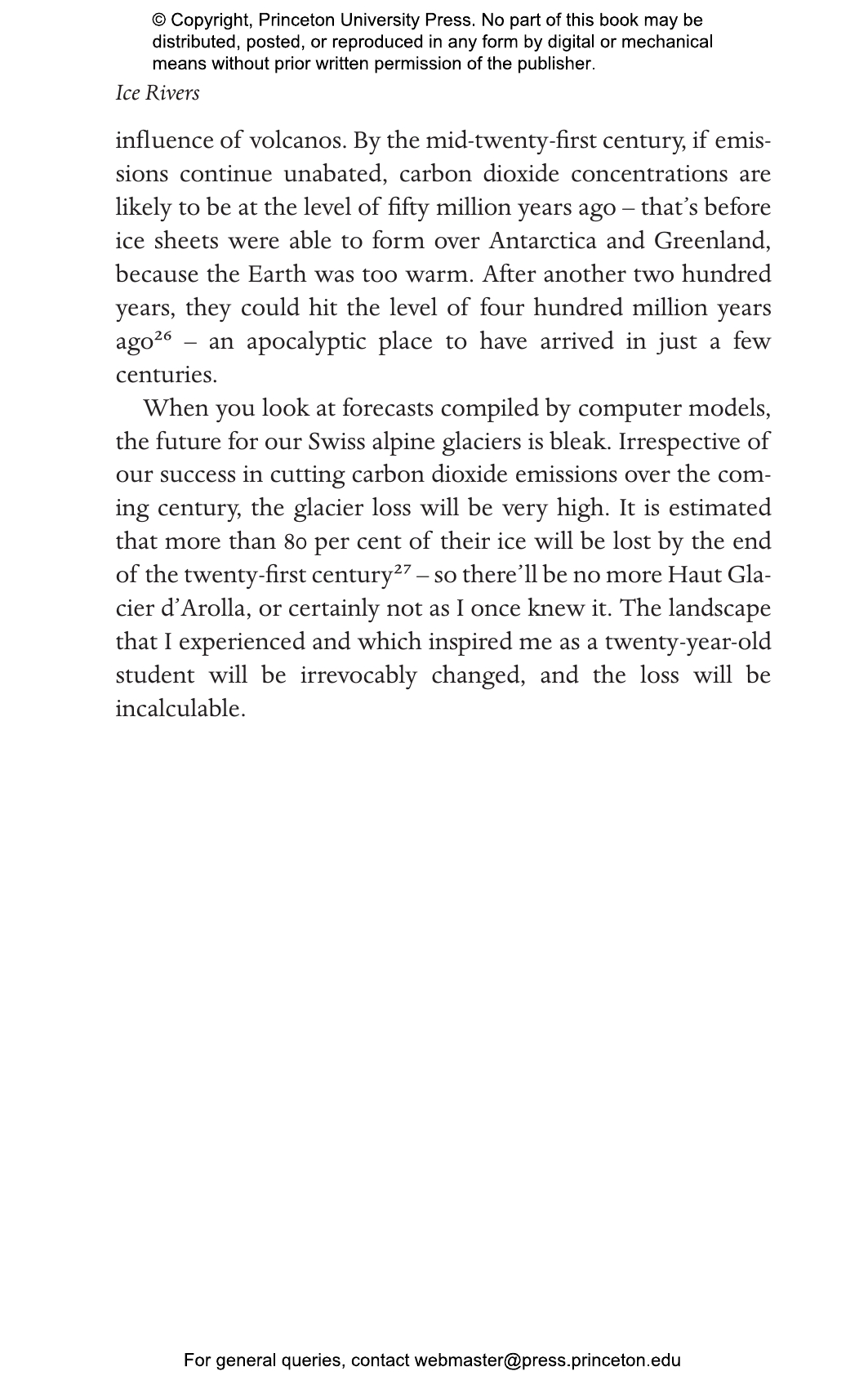 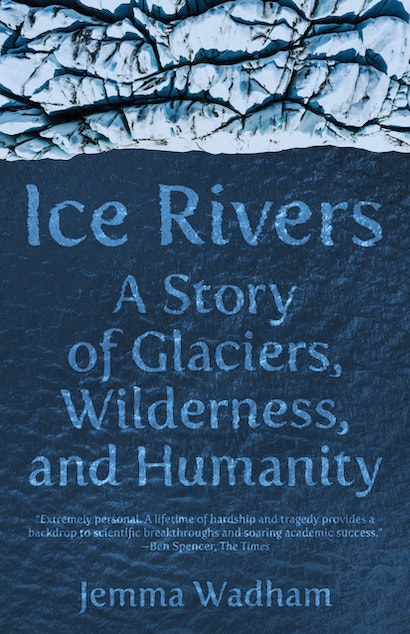 The ice sheets and glaciers that cover one-tenth of Earth’s land surface are in grave peril. High in the Alps, Andes, and Himalaya, once-indomitable glaciers are retreating, even dying. Meanwhile, in Antarctica, thinning glaciers may be unlocking vast quantities of methane stored for millions of years beneath the ice. In Ice Rivers, renowned glaciologist Jemma Wadham offers a searing personal account of glaciers and the rapidly unfolding crisis that they—and we—face.

Taking readers on a personal journey from Europe and Asia to Antarctica and South America, Wadham introduces majestic glaciers around the globe as individuals—even friends—each with their own unique character and place in their community. She challenges their first appearance as silent, passive, and lifeless, and reveals that glaciers are, in fact, as alive as a forest or soil, teeming with microbial life and deeply connected to almost everything we know. They influence crucial systems on which people depend, from lucrative fisheries to fertile croplands, and represent some of the most sensitive and dynamic parts of our world. Their fate is inescapably entwined with our own, and unless we act to abate the greenhouse warming of our planet the potential consequences are almost unfathomable.

Jemma Wadham is Professor of Glaciology at UiT the Arctic University of Norway, the Norwegian Polar Institute, and the University of Bristol. She has led more than twenty-five expeditions to glaciers around the world, from Greenland and Antarctica to the Peruvian Andes and the Himalaya. She has received prestigious awards for her research, including a Philip Leverhulme Prize and a Royal Society Wolfson Award.

"An emotional, masterful science narrative. . . . Edifying and expressive, Ice Rivers documents how glaciers are integral to their icy ecosystems, to vulnerable human and wildlife populations, and to Earth as a whole. Wadham is an artful storyteller who makes a passionate case for taking bold, swift action on climate issues."—Rachel Jagareski, Foreword Reviews, starred review

"[Ice Rivers] is extremely personal. A lifetime of hardship and tragedy provides a backdrop to scientific breakthroughs and soaring academic success."—Ben Spencer, The Times

"A riveting tale of icy landscapes on the point of irreversible change and filled with stories of encounters with polar bears and survival in the wilds under the midnight sun, Ice Rivers is a memoir like no other – a passionate love letter, no less, to the glaciers that have been one woman's lifelong obsession."—Candice Pearson, British GQ

"Ice Rivers doesn’t just explain what glaciers are, it digs into who they are – the glaciers become characters of their own in Wadham’s straightforward, yet often poetic, words."—Ysabelle Kempe, Grist

"[Ice Rivers is] a breezy read, with an eager party host vibe ('let me introduce to you my friend the glacier; I think you two will get along'). . . . Where the book really comes alive is in its vivid snapshots of a scientist’s life in the field. . . . These recollections are honest, funny and poignant, and reveal how the highs and lows of fieldwork are inextricably intertwined."—Carolyn Gramling, Science News

"A stunning glimpse into a life studying glaciers all around the world. . . . Wadham skillfully explains concepts that are almost too big and vast to understand, like the ice sheets themselves, while being brutally honest about impending risks without losing hope."—Michelle Anya Anjirbag, Shelf Awareness

"That glaciers and ice sheets across the planet are shrinking isn’t news and it must be challenging for scientists to try to work out how to petition the general public for an emotional response to the seemingly sterile landscapes about which they care so passionately. Jemma Wadham somehow manages to bring something new. She turns glaciers from stern automatonical ice machines – that seem to possess a lot of grandeur but not much personality – into something one can feel a little more amity towards."—Olivia Edward, Geographical

"Wadham presents a thoughtful and intimate exploration of the important relationship glaciers have with the planet and, by extension, with humanity as people confront the damaging realities of global climate change. The book is an easy read, demonstrating Wadham's commitment to making her topic accessible for nonscientists. She accomplishes this through masterful employment of a reflective personal writing style, focusing on interactions with the people she meets during her travels, and by describing her research in a remarkably relatable way."—W. Weston, Choice

"Seamlessly blends memoir with hard science, offering both an account of Wadham’s three decades of research and insight into the person behind it."—David James, Anchorage Daily News