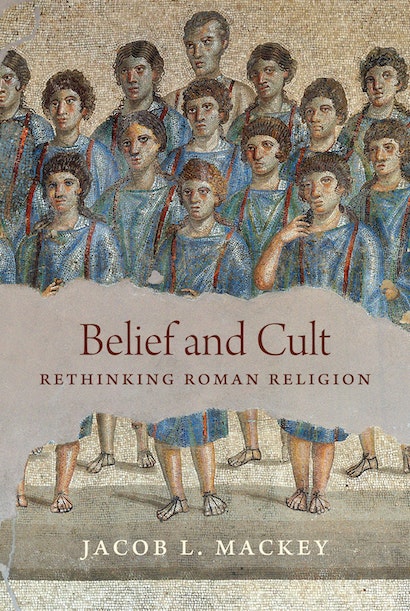 Belief and Cult argues that belief isn’t uniquely Christian but was central to ancient Roman religion. Drawing on cognitive theory, Jacob Mackey shows that despite having nothing to do with salvation or faith, belief underlay every aspect of Roman religious practices—emotions, individual and collective cult action, ritual norms, social reality, and social power. In doing so, he also offers a thorough argument for the importance of belief to other non-Christian religions.

At the individual level, the book argues, belief played an indispensable role in the genesis of cult action and religious emotion. However, belief also had a collective dimension. The cognitive theory of Shared Intentionality shows how beliefs may be shared among individuals, accounting for the existence of written, unwritten, or even unspoken ritual norms. Shared beliefs permitted the choreography of collective cult action and gave cult acts their social meanings. The book also elucidates the role of shared belief in creating and maintaining Roman social reality. Shared belief allowed the Romans to endow agents, actions, and artifacts with socio-religious status and power. In a deep sense, no man could count as an augur and no act of animal slaughter as a successful offering to the gods, unless Romans collectively shared appropriate beliefs about these things.

Closely examining augury, prayer, the religious enculturation of children, and the Romans’ own theories of cognition and cult, Belief and Cult promises to revolutionize the understanding of Roman religion by demonstrating that none of its features makes sense without Roman belief.

“Belief and Cult is the first book to comprehensively demonstrate the role of belief in Roman religion and indeed to show that Roman religion would not be possible without belief. Jacob Mackey breaks new ground by examining the role of mental states and intentionality in various cult contexts. This is an excellent and important book that will spark debate and discussion.”—Jennifer Larson, Kent State University

“Belief and Cult has the potential to be a game changer—a seminal work and turning point in the study of Roman religion. Jacob Mackey’s wide-ranging and cogent book makes a constructive and highly valuable contribution to our understanding of Roman religion and Roman society more broadly. An impressive book.”—James B. Rives, University of North Carolina, Chapel Hill