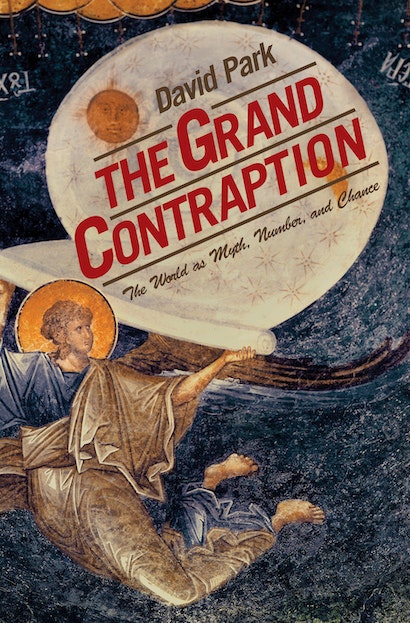 The Grand Contraption tells the story of humanity’s attempts through 4,000 years of written history to make sense of the world in its cosmic totality, to understand its physical nature, and to know its real and imagined inhabitants. No other book has provided as coherent, compelling, and learned a narrative on this subject of subjects. David Park takes us on an incredible journey that illuminates the multitude of elaborate “contraptions” by which humans in the Western world have imagined the earth they inhabit — and what lies beyond. Intertwining history, religion, philosophy, literature, and the physical sciences, this eminently readable book is, ultimately, about the “grand contraption” we’ve constructed through the ages in an effort to understand and identify with the universe.


According to Park, people long ago conceived of our world as a great rock slab inhabited by gods, devils, and people and crowned by stars. Thinkers imagined ether to fill the empty space, and in the comforting certainty of celestial movement they discerned numbers, and in numbers, order. Separate sections of the book tell the fascinating stories of measuring and mapping the Earth and Heavens, and later, the scientific exploration of the universe.


The journey reveals many common threads stretching from ancient Mesopotamians and Greeks to peoples of today. For example, humans have tended to imagine Earth and Sky as living creatures. Not true, say science-savvy moderns. But truth isn’t always the point. The point, says Park, is that Earth is indeed the fragile bubble we surmise, and we must treat it with the reverence it deserves.

David Park is Webster Atwell-Class of 1921 Professor of Physics, Emeritus at Williams College. He is the author of seven previous books, including The Fire within the Eye, a New York Times Notable Book of the Year in 1997, and The How and the Why (both Princeton).

"Through flood myths and daimones (guardian angels), and the interplay of the elements—earth, air, fire and water—Park lovingly charts the history of how we imagines Earth and out place in its surroundings."—Paul Nettleton, The Guardian

"Bring Homer and Einstein, Aristotle and Columbus into one timeless room (with translators), and their conversation would likely turn to the themes of this astonishingly capacious history of cosmology. . . . An exhilarating intellectual adventure."—Booklist

"In this comprehensive and fascinating book, Park reviews how theologians, philosophers, and mathematicians have attempted to explain subjects ranging from the creation of life to the nature of matter and the structure of the universe. . . . Park gives a comprehensive and readable overview of the 'grand contraption' that is the universe."—Science News

"The Grand Contraption is a masterful presentation of the long timelines in the history of cosmology. It is a remarkable book on the development of the worldview from chaos to cosmos, and from the most ancient cultures to modern time."—Helge Kragh, Physics Today

"There is no practical way, of course, to pack all human understanding into a single volume, and Park doesn't try. Instead, he traces our evolving lines of reasoning, at least those emerging in the Western world, from early myth through the emergence of modern philosophy to the establishment of scientific method. . . . From person to person, period to period, Park threads together how myths were jettisoned for fact, how fact turned out to be more fabulous than myth."—Scott LaFee, San Diego Union-Tribune

"This book celebrates the formation of ideas based on myth, religion, aesthetics, logic and mathematics as they have evolved over the past four thousand years. . . . David Park is a fabulous guide through the history of these ideas and the minds of the great participants."—B. I. Henry, Australian Physics

"By abandoning any attempt to construct a neat plot, Park has avoided the temptation to trace out a progressive line leading inexorably toward modern science, and the book's meandering structure itself recalls the nondirectional pattern of scientific change. . . . Park's decision to be guided by personal choice and serendipity has led him to construct a meta-commentary on science's history."—Patricia Fara, Isis

"The Grand Contraption is the long-needed antidote to all those top-heavy histories of scientific thought that pass brusquely over the philosophies of the ancient world, eager to find the sure footing of modernity. Park tells us not only what science now knows, but how it got to know it: from an enthralling mix of myth, genius, logic, careful observation, guesswork, invention, and a dash of inspired lunacy."—Philip Ball, author of Life's Matrix and consultant editor, Nature

"This book literally grabs you. The facts presented, the stories told, the author's reflections on the information he presents, are rendered beautifully-and masterfully. This is a labor of love, and the passion with which David Park has written the book is readily apparent and makes one want to keep on reading. And in doing so one is richly rewarded with keen insights, judicious appraisals, and with questions regarding courses of action and consequences that are not only thought provoking but also relevant."—Silvan S. Schweber, Brandeis University and Harvard University, author of QED and the Men Who Made It (Princeton)

"The Grand Contraption is an impressive feat of scholarship in the history of science, and it is even more impressive if one considers that it is written in clear and unpretentious English. Park offers, in plain language, an attractive way to think about cosmological ideas from a single perspective. No one will put this book down without having their level of consciousness raised by a few notches."—Christian Wildberg, Princeton University

"Physics, astronomy, geology, and poetry all come together here in the grand quest to understand what out universe is and how it works. "Only a handful of authors have both the expertise and the courage to write a book of this sweep and depth. David Park has woven together a vast tapestry of humankind's vision of the cosmos, from ancient myths to our contemporary curiosity about intelligent life on other worlds."—Owen Gingerich. Professor of Astronomy & the History of Science, Harvard-Smithsonian Center for Astrophysics

"An exceptional and well-written introduction to the history of ideas, viewed from the perspective of their creators, who were adapting their thinking to new facts and conceptions as they went. We found the book engrossing and illuminating."—Elizabeth Wayland Barber and Paul T. Barber, coauthors of When They Severed Earth from Sky