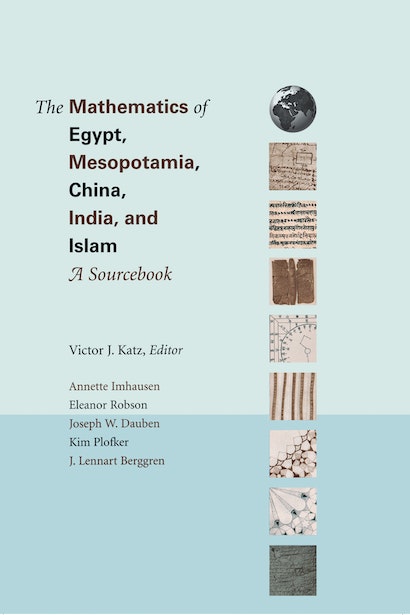 In recent decades it has become obvious that mathematics has always been a worldwide activity. But this is the first book to provide a substantial collection of English translations of key mathematical texts from the five most important ancient and medieval non-Western mathematical cultures, and to put them into full historical and mathematical context. The Mathematics of Egypt, Mesopotamia, China, India, and Islam gives English readers a firsthand understanding and appreciation of these cultures’ important contributions to world mathematics.


The five section authors — Annette Imhausen (Egypt), Eleanor Robson (Mesopotamia), Joseph Dauben (China), Kim Plofker (India), and J. Lennart Berggren (Islam) — are experts in their fields. Each author has selected key texts and in many cases provided new translations. The authors have also written substantial section introductions that give an overview of each mathematical culture and explanatory notes that put each selection into context. This authoritative commentary allows readers to understand the sometimes unfamiliar mathematics of these civilizations and the purpose and significance of each text.

Victor J. Katz is professor emeritus of mathematics at the University of the District of Columbia. His many books include the textbook, A History of Mathematics: An Introduction, 2nd ed. (Addison-Wesley). He is the coeditor of Historical Modules for the Teaching and Learning of Mathematics.

"This pioneering work provides English translations of mathematical texts from each of these regions and cultures, and a better understanding of their contributions to mathematics. There are nuggets of information difficult to find elsewhere. The use of non-mathematical sources, particularly letters and administrative documents from Egypt and Mesopotamia, reveals the practical applications of mathematics and the scribes who composed and used the documents...An essential resource for anyone wishing to know more about how the mathematics of the different regions influenced and shaped the development of world mathematics."—George Gheverghese Joseph, Nature

"We're aware that the ancient cultures were mathematically advanced. Now translations of early texts from five key regions are available together for the first time, and put into context by experts."—Nature Physics

"The corrections to the Eurocentrism that understandably characterized Western assays of the intellectual history of the planet early on must inevitably be applied to the history of mathematics. Editor Katz and his scholarly coauthors have greatly advanced the process with this one-volume sourcebook...The introductory essays that precede each section are lucidly written, well within the reach of an undergraduate math major. Katz asks more or less rhetorically 'how much effect the mathematics of these civilizations had on what is now world mathematics of the twenty-first century.' This invaluable book will help significantly in formulating an answer."—M. Schiff, Choice

"The Mathematics of Egypt, Mesopotamia, China, India, and Islam is a wonderful collection, for which Victor Katz is to be commended. This book is a one-stop source for numerous original mathematical texts in translation. I cannot overemphasize how wonderful it is to have this large, exquisite selection of . . . mathematical texts together in one volume. . . . Every history of mathematics teacher will want a copy of this book in their personal library as well as in the library of their college or university."—James V. Rauff, Mathematics and Computer Education

"What we have here is a useful selection, one that should be of interest to specialists in world history or in the history of the sciences in any of these culture areas and, in particular, to scholars who are engaged with the history of mathematics as specialists or because of its role as a tool."—Tom Archibald, Isis

"[This] is the biggest sourcebook containing the newest fruit of historical research and that is why the book can replace older sources for the history of mathematics."—EMS Newsletter

"This is the first major sourcebook in English for the history of mathematics in Egypt, Mesopotamia, India, China, and the Middle East. It is notable for the wide variety of sources, which will challenge preconceptions everywhere, as well as for the clarity and force of the introductions to the mathematical cultures on display. The authors are leading authorities in their subjects, and the scholarship is of the highest order. This book will be an irreplaceable source for a general mathematical readership."—Jeremy J. Gray, author of The History of Mathematics: A Reader and The Hilbert Challenge

"Unique and timely, this book will enrich students' and general mathematical readers' understanding of the depth and power of non-Western mathematics for decades to come, and I will be first in line to buy it. It presents fuller portraits of the mathematical histories of these five non-Western cultures than are found in other books. One of the greatest strengths of the book is its scholarship. All of the authors are established or renowned scholars, and they have done a uniformly good job of selecting readings that give a cross-section of their subject."—Glen Van Brummelen, coeditor of Mathematics and the Historian's Craft