The epic story of human evolution, from our primate beginnings more than five million years ago to the agricultural era 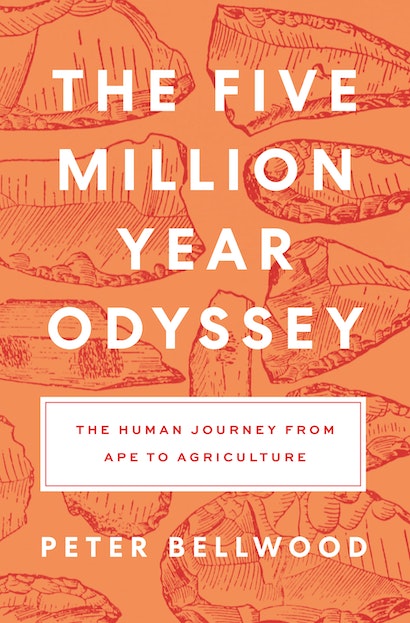 Over the course of five million years, our primate ancestors evolved from a modest population of sub-Saharan apes into the globally dominant species Homo sapiens. Along the way, humans became incredibly diverse in appearance, language, and culture. How did all of this happen? In The Five-Million-Year Odyssey, Peter Bellwood synthesizes research from archaeology, biology, anthropology, and linguistics to immerse us in the saga of human evolution, from the earliest traces of our hominin forebears in Africa, through waves of human expansion across the continents, and to the rise of agriculture and explosive demographic growth around the world.

Bellwood presents our modern diversity as a product of both evolution, which led to the emergence of the genus Homo approximately 2.5 million years ago, and migration, which carried humans into new environments. He introduces us to the ancient hominins—including the australopithecines, Homo erectus, the Neanderthals, and others—before turning to the appearance of Homo sapiens circa 300,000 years ago and subsequent human movement into Eurasia, Australia, and the Americas. Bellwood then explores the invention of agriculture, which enabled farmers to disperse to new territories over the last 10,000 years, facilitating the spread of language families and cultural practices. The outcome is now apparent in our vast array of contemporary ethnicities, linguistic systems, and customs.

The fascinating origin story of our varied human existence, The Five-Million-Year Odyssey underscores the importance of recognizing our shared genetic heritage to appreciate what makes us so diverse.

Peter Bellwood is professor emeritus of archaeology at the Australian National University. His many books include First Migrants: Ancient Migration in Global Perspective and First Farmers: The Origins of Agricultural Societies. He is the winner of the 2021 International Cosmos Prize.

“Peter Bellwood is the foremost expert on the spread of farming and peoples around the world. In this wonderful book, he tells the story of humans and protohumans during the past five million years, since our ancestors and chimpanzees’ ancestors parted evolutionary company. Bellwood’s comprehensive, balanced, and fascinating account is a masterpiece of making complicated events understandable. Put this book at the top of your reading pile!”—Jared Diamond, Pulitzer Prize–winning author of Guns, Germs, and Steel

“Five million years of humanity unlocked by combining multiple lines of evidence, not only from the archaeological record but also from human genes and families of related languages. Peter Bellwood gives a rich and lucid account of where we come from and how our migrations shaped the modern world. A brilliant book that deserves a place on your nightstand.”—Martine Robbeets, Max Planck Institute for the Science of Human History

“An engaging and insightful tour of human evolution and cultural history from our origins more that five million years ago to the global spread of modern humans and the beginnings of agriculture. Bellwood masterfully weaves together the wealth of scientific evidence from paleontology, archaeology, linguistics, and genetics to elucidate our evolutionary trail and how we got to be us.”—Terry Harrison, New York University

“A magisterial account of the history of our species on its long journey from small-brained ape-like creatures to the people we understand ourselves to be. Peter Bellwood is a giant in his field, and he brings a breadth and depth of knowledge to this book that is marvelous to behold, deftly unrolling five million years of human evolution—both physical and cultural—with consummate authority and skill. A grand tutorial for anyone interested in the deep history of humankind.”—Christina Thompson, author of Sea People: The Puzzle of Polynesia