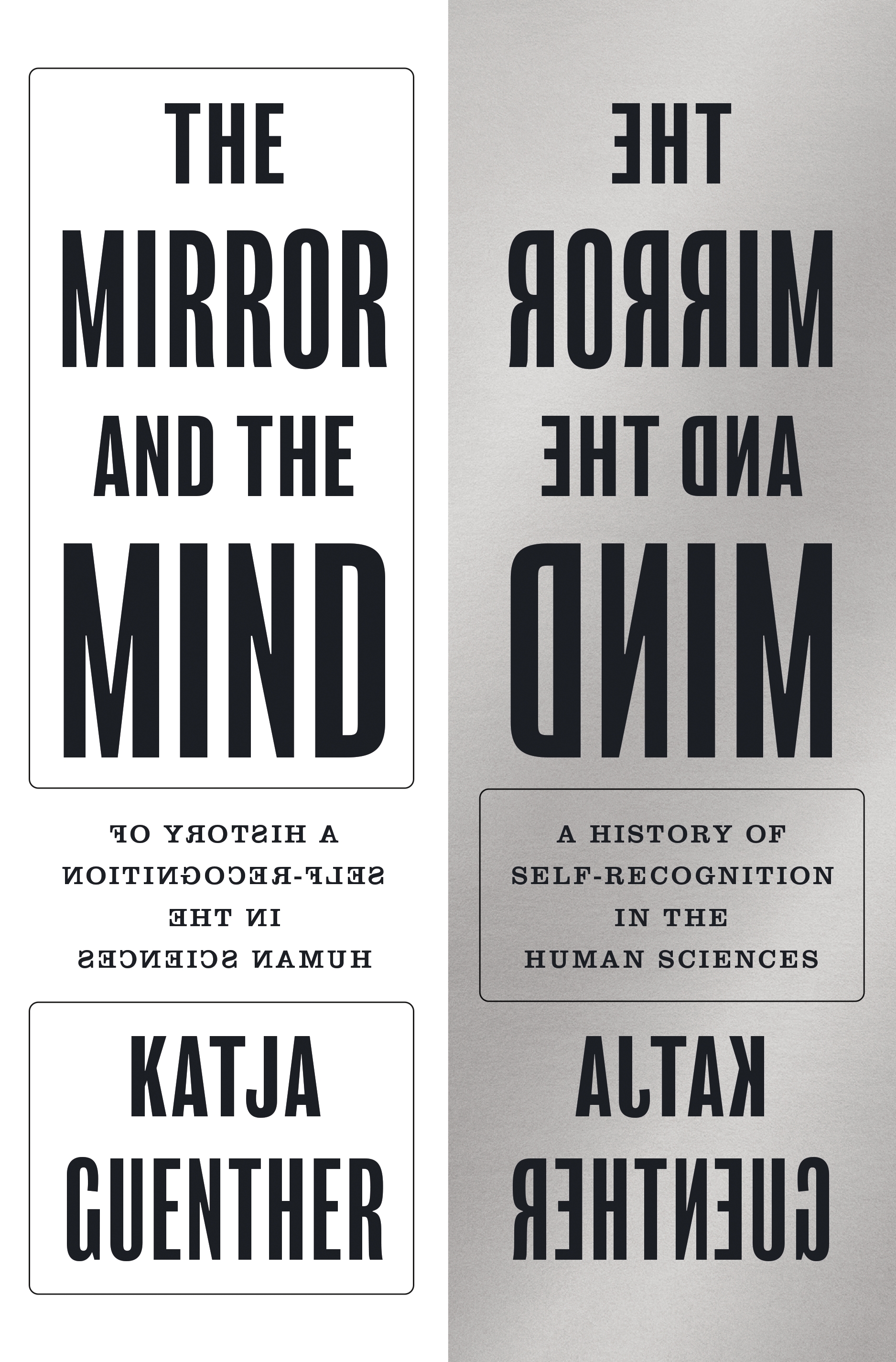 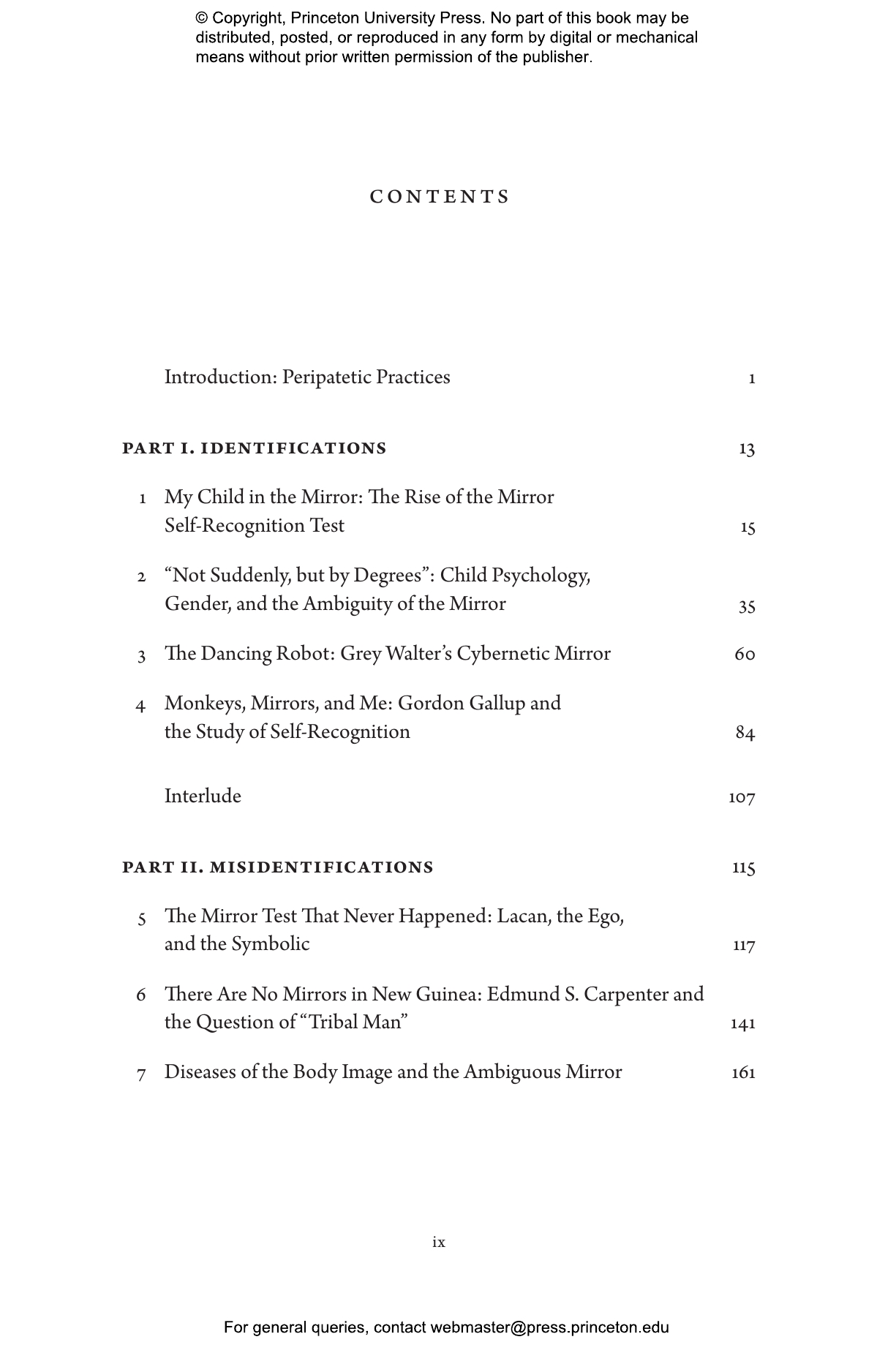 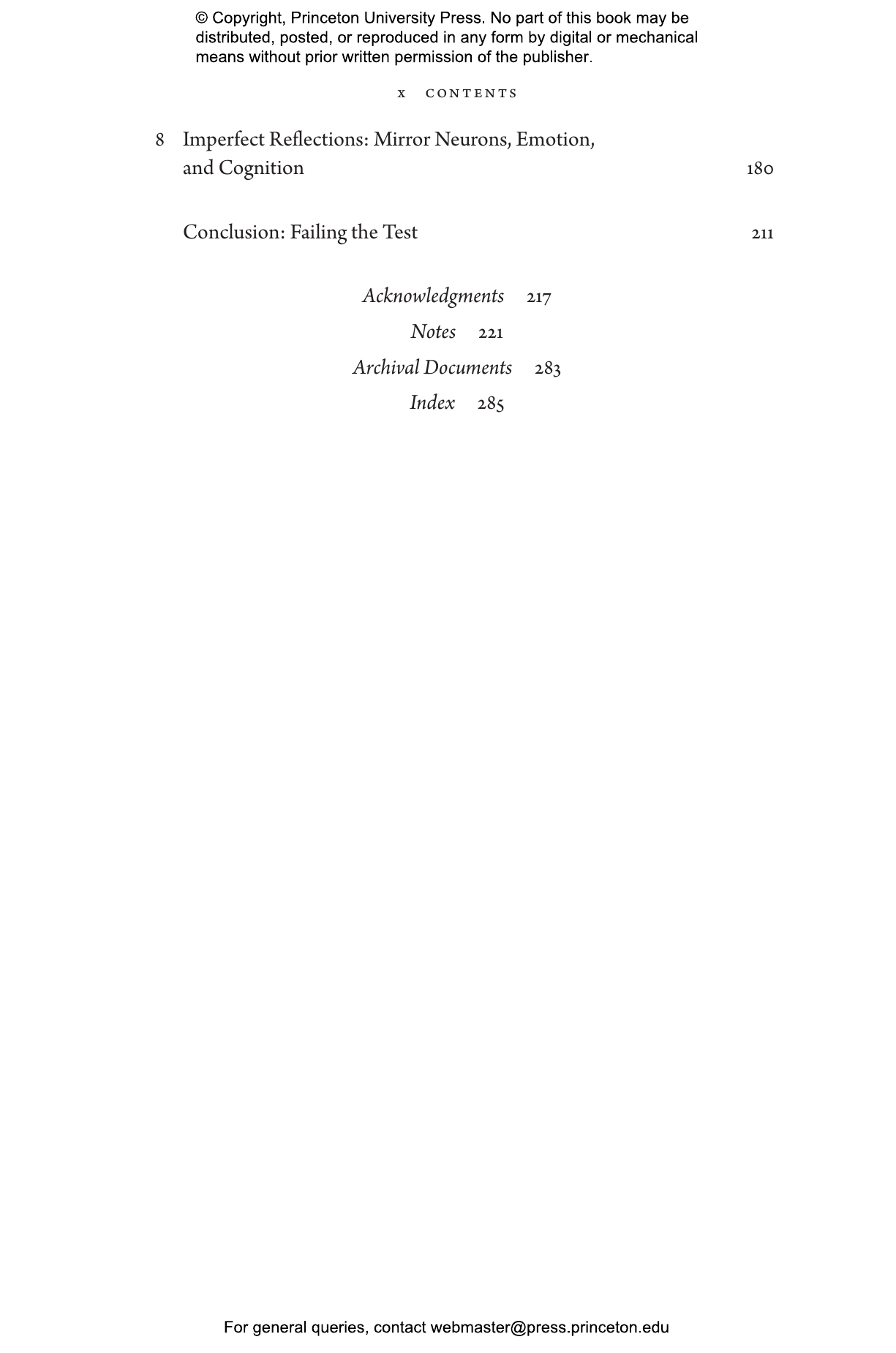 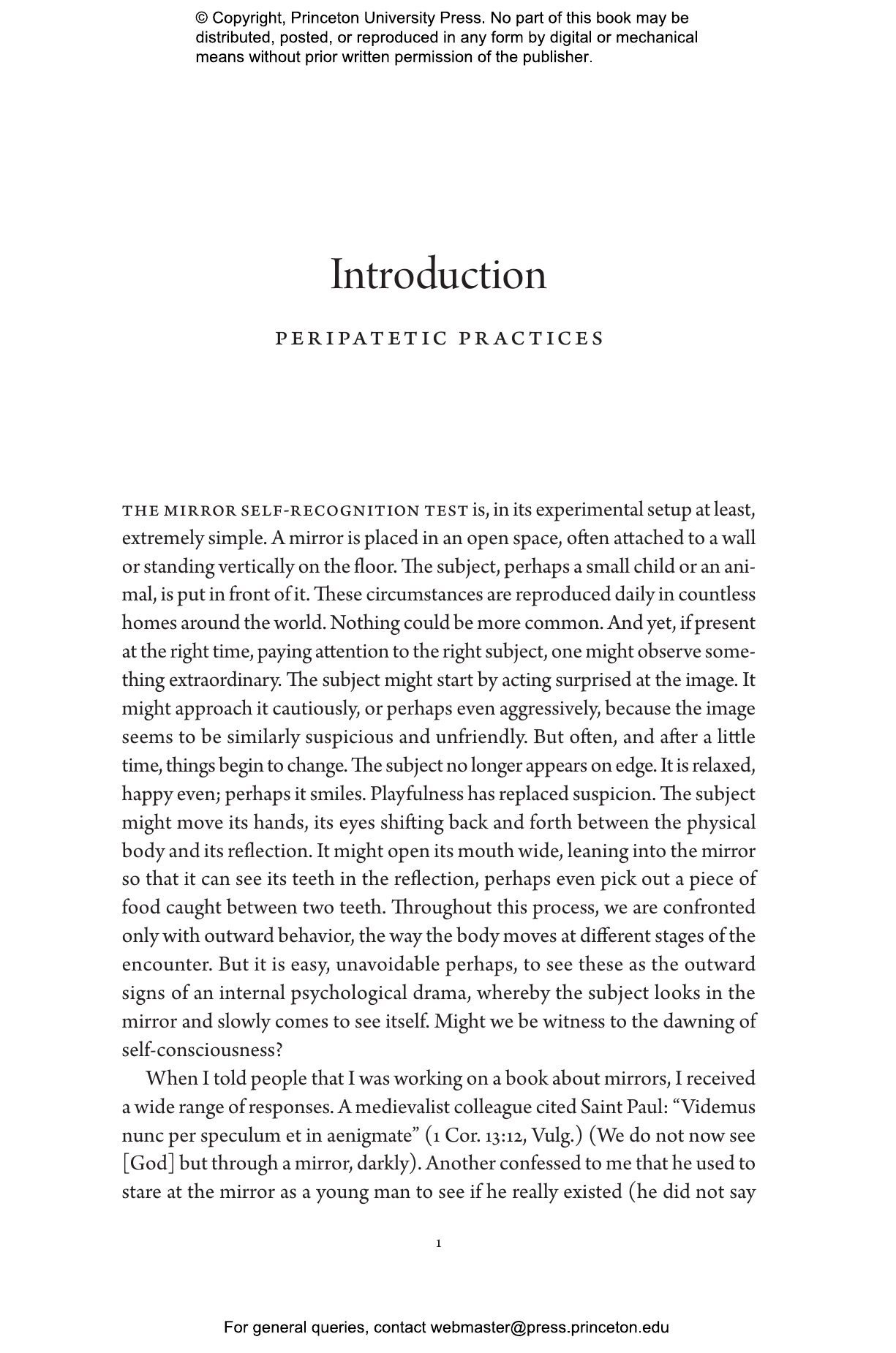 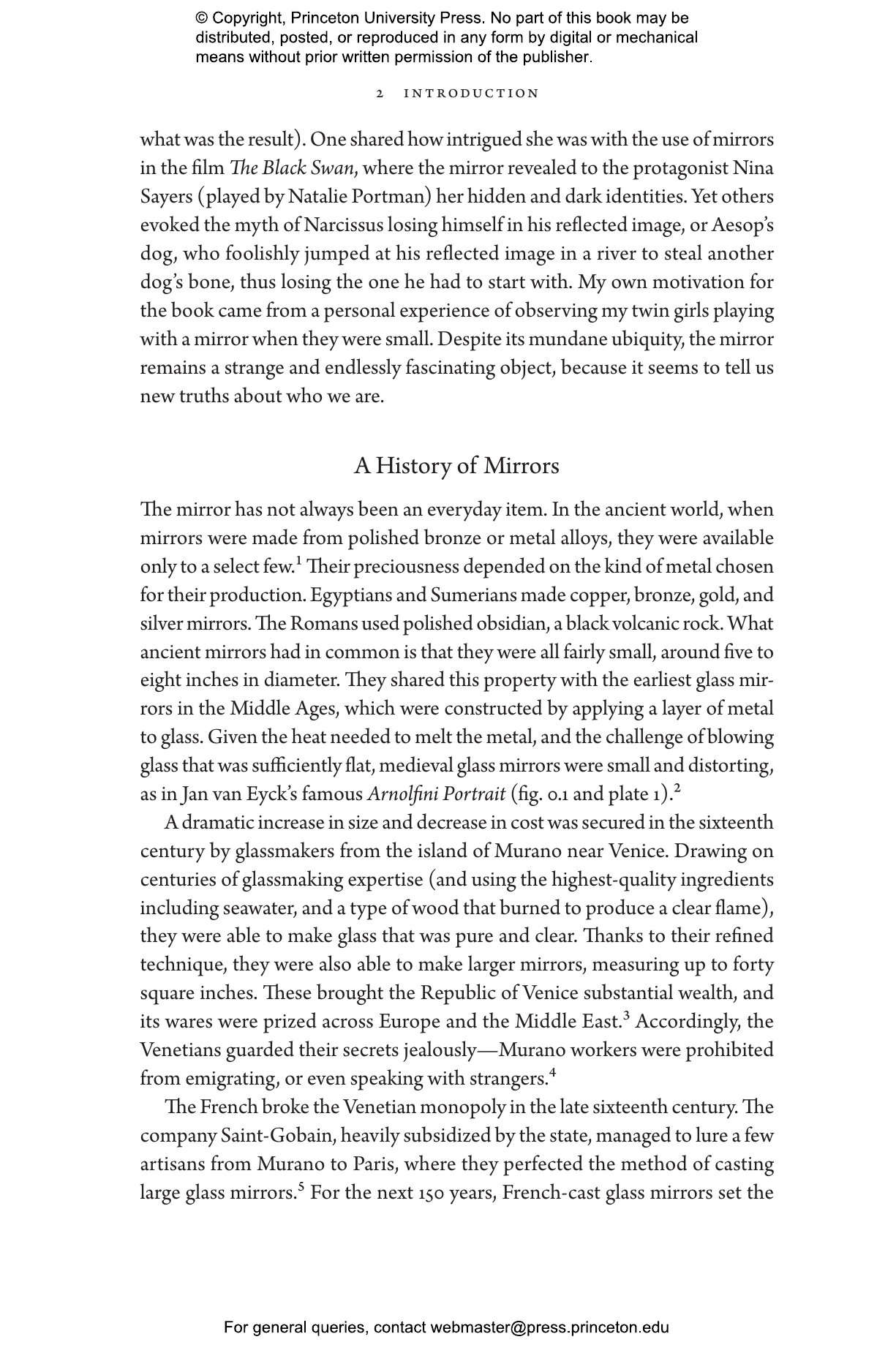 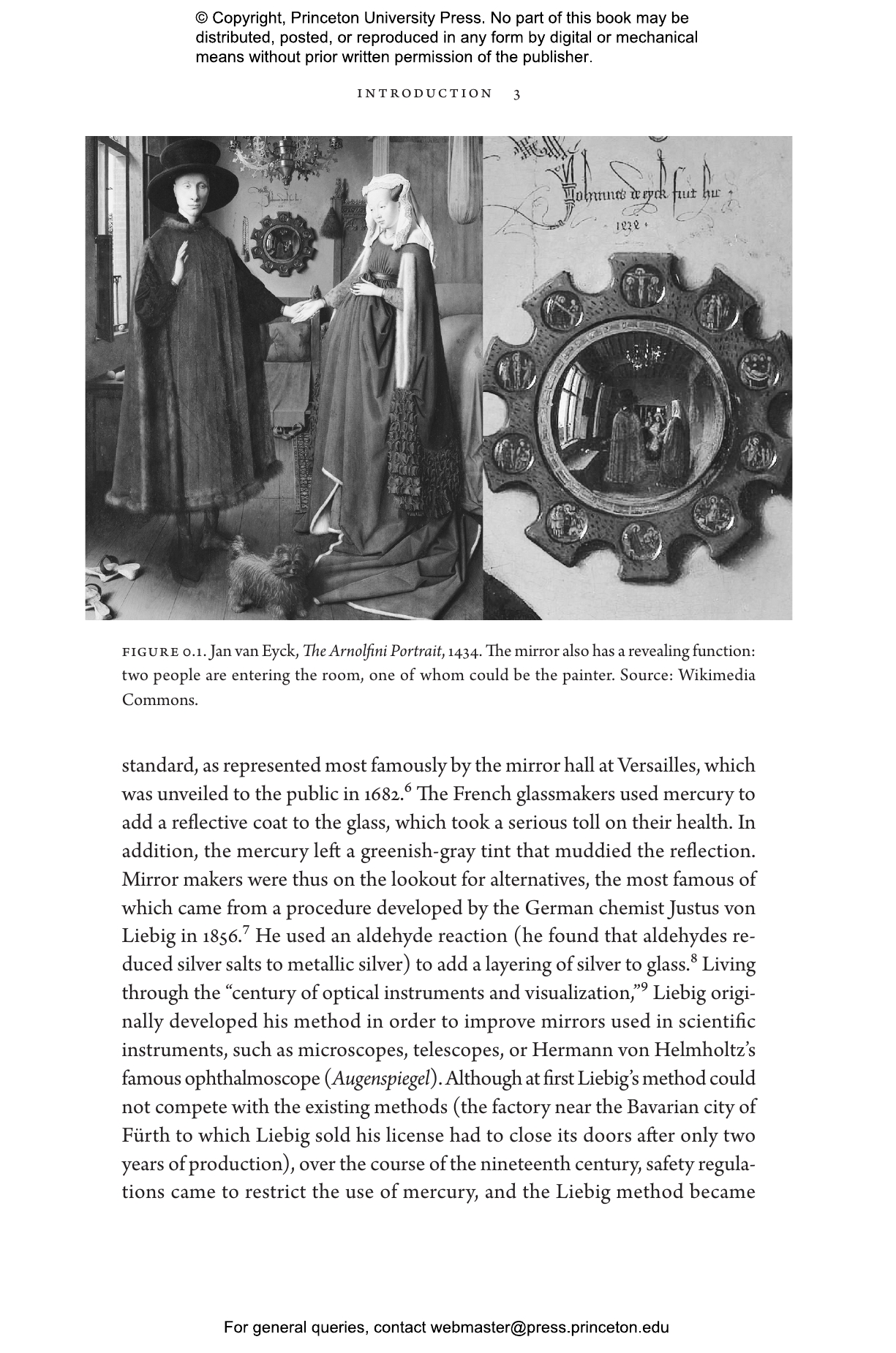 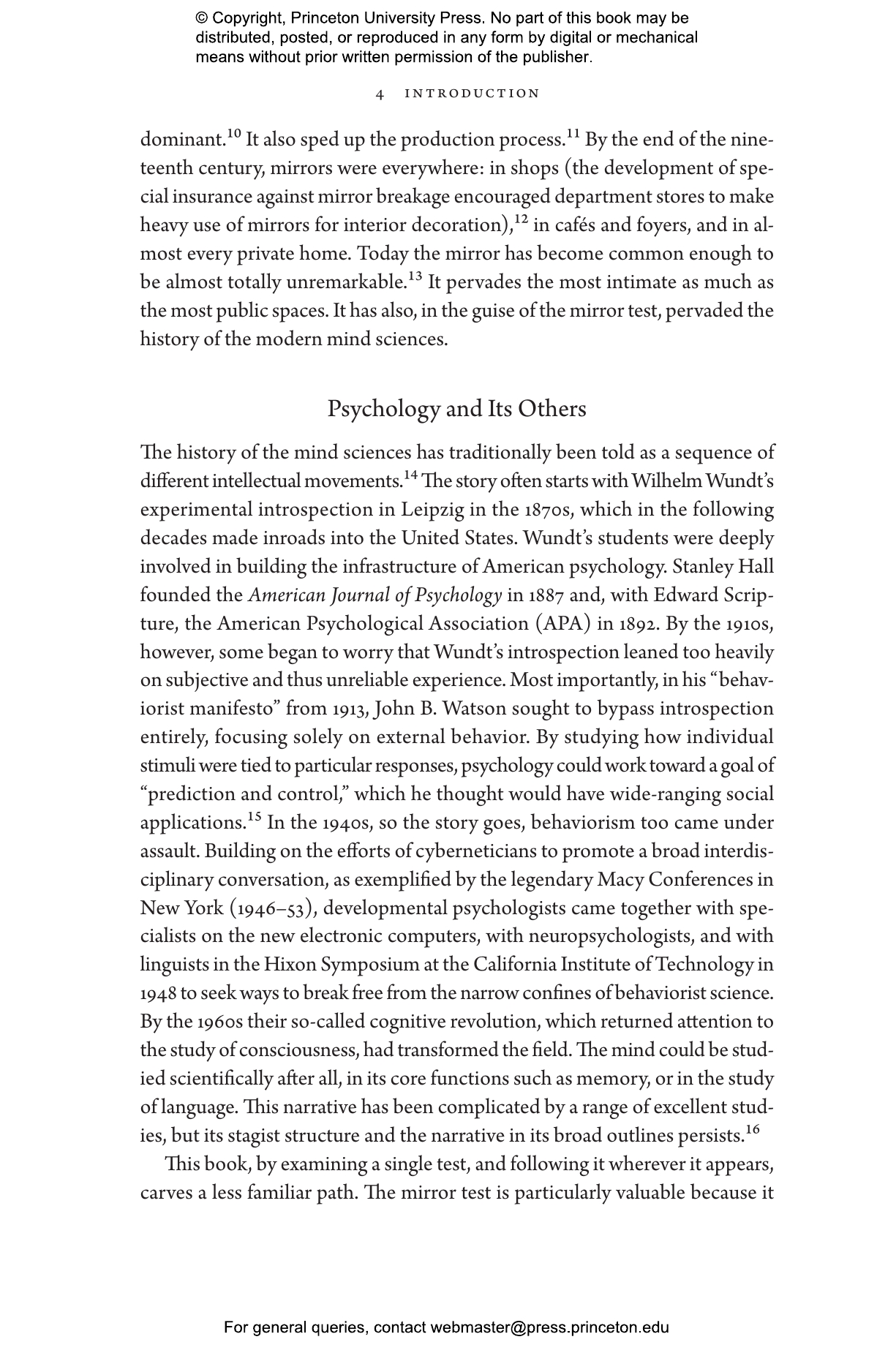 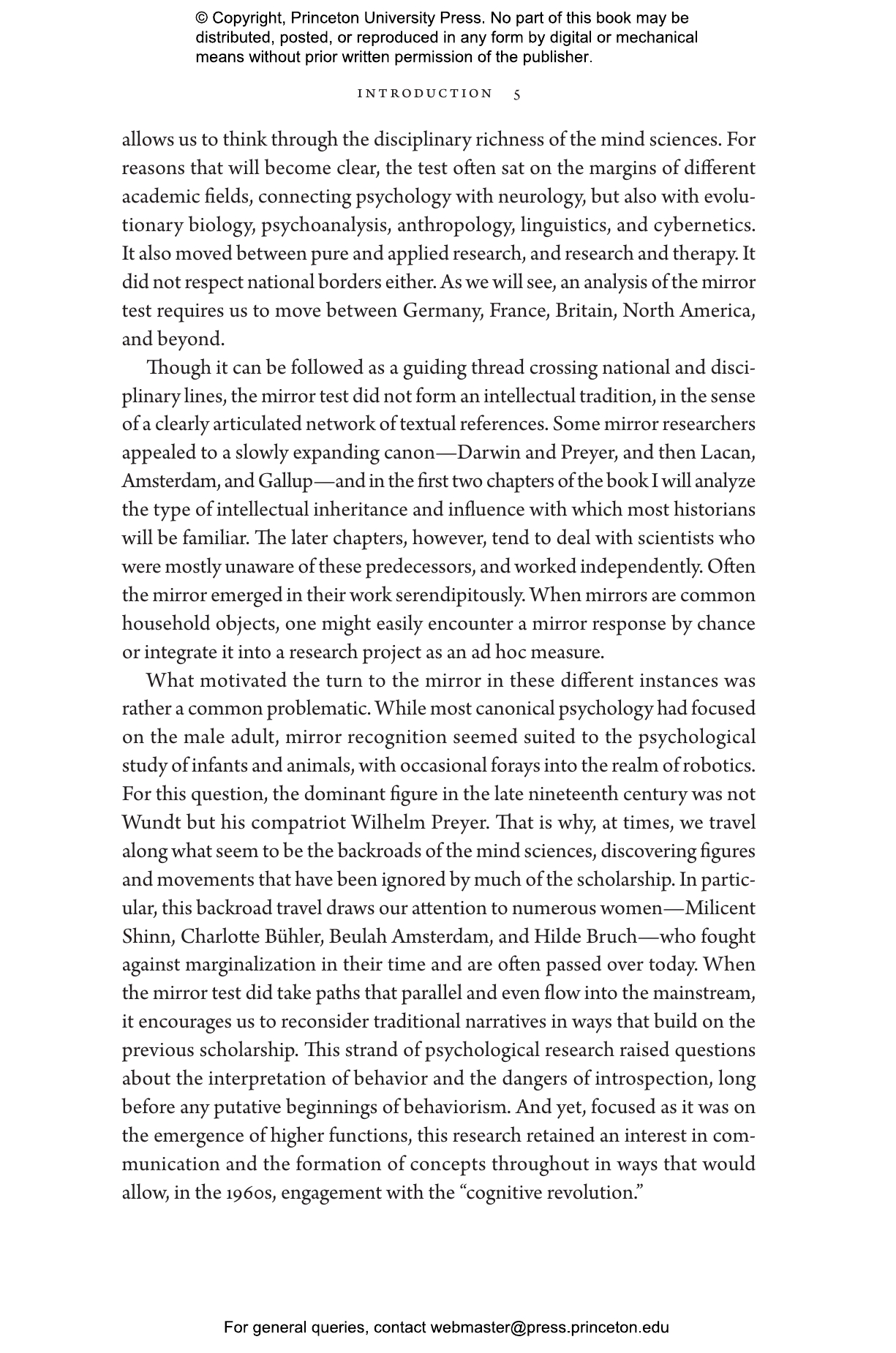 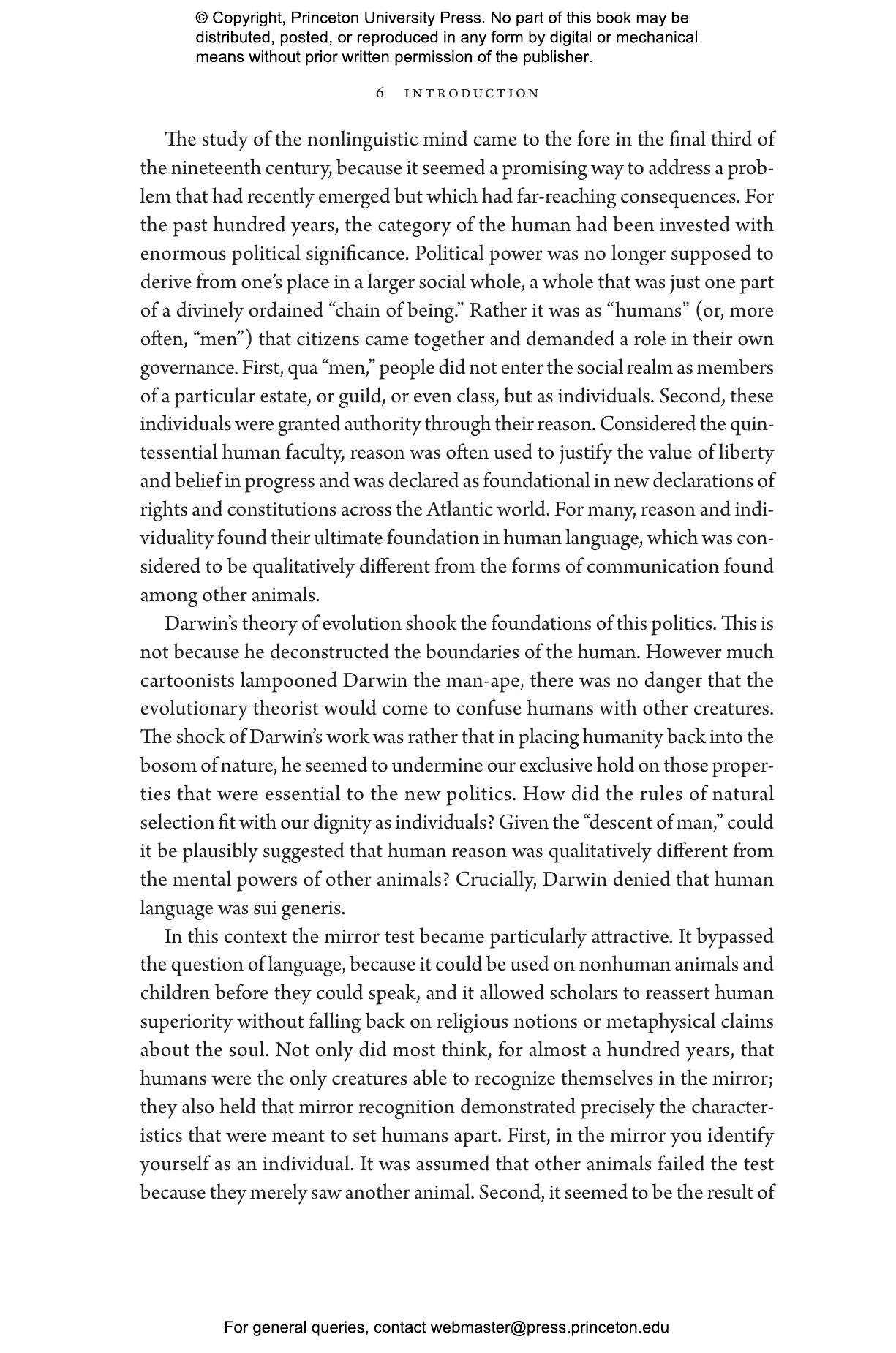 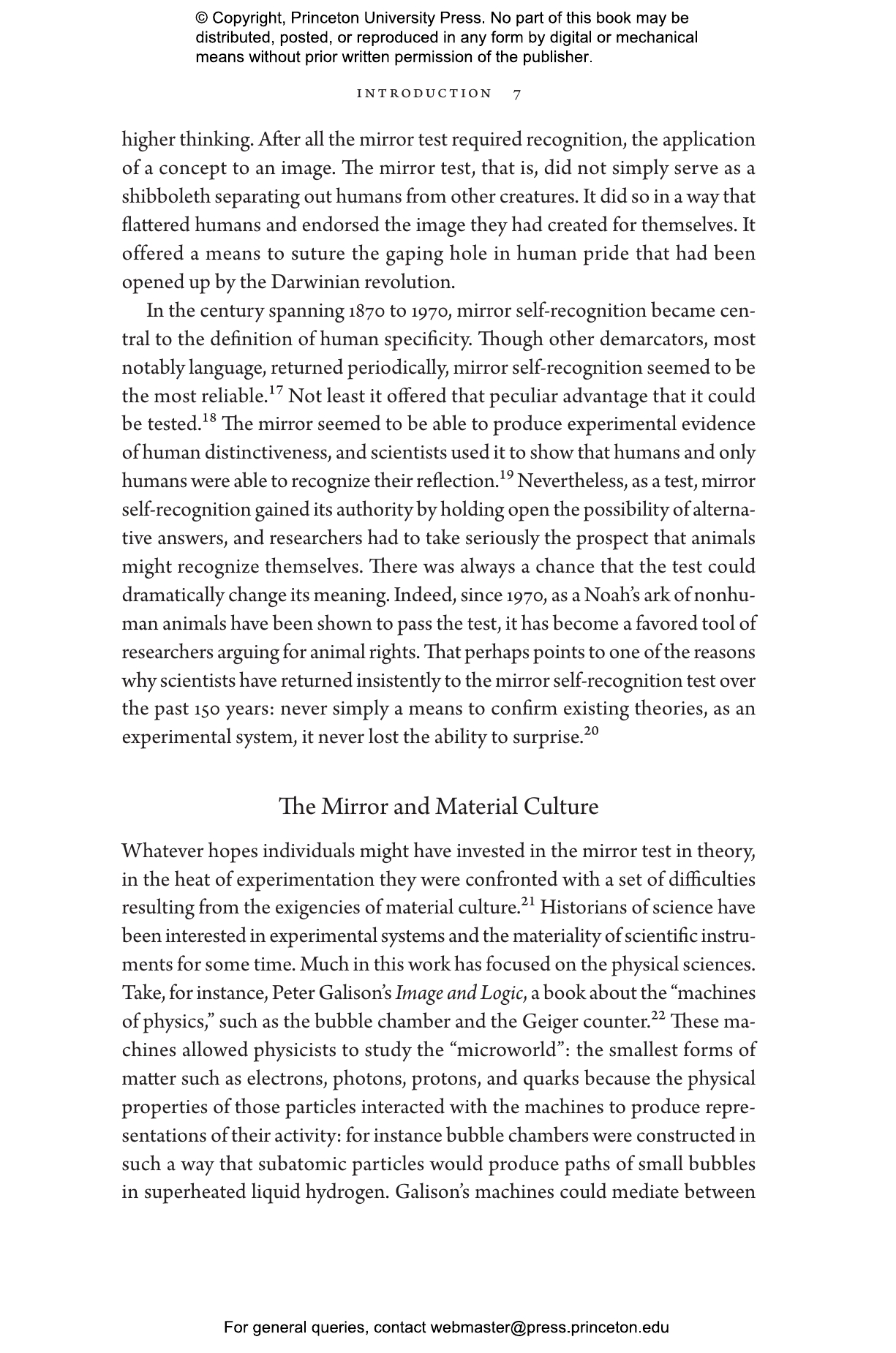 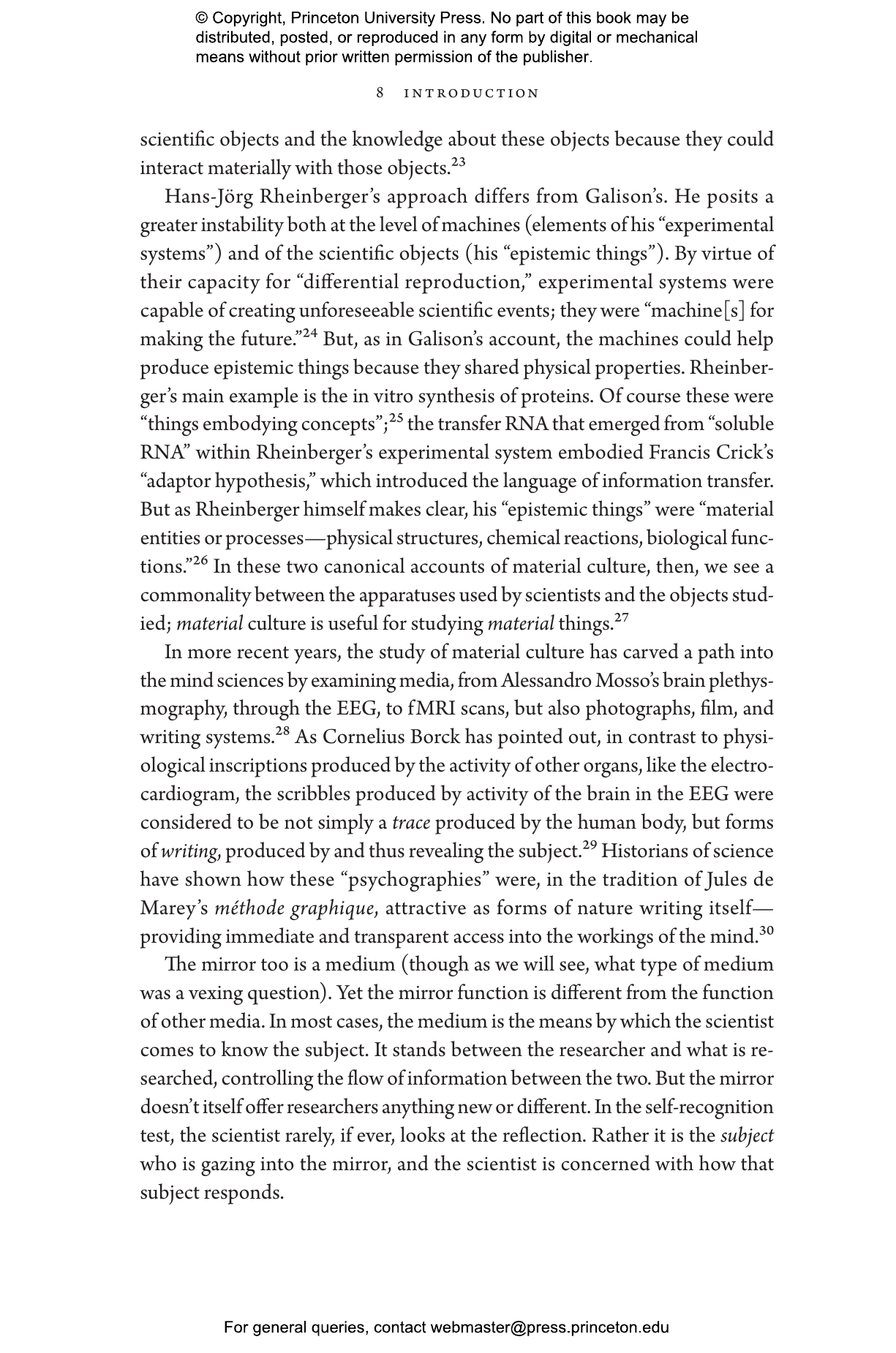 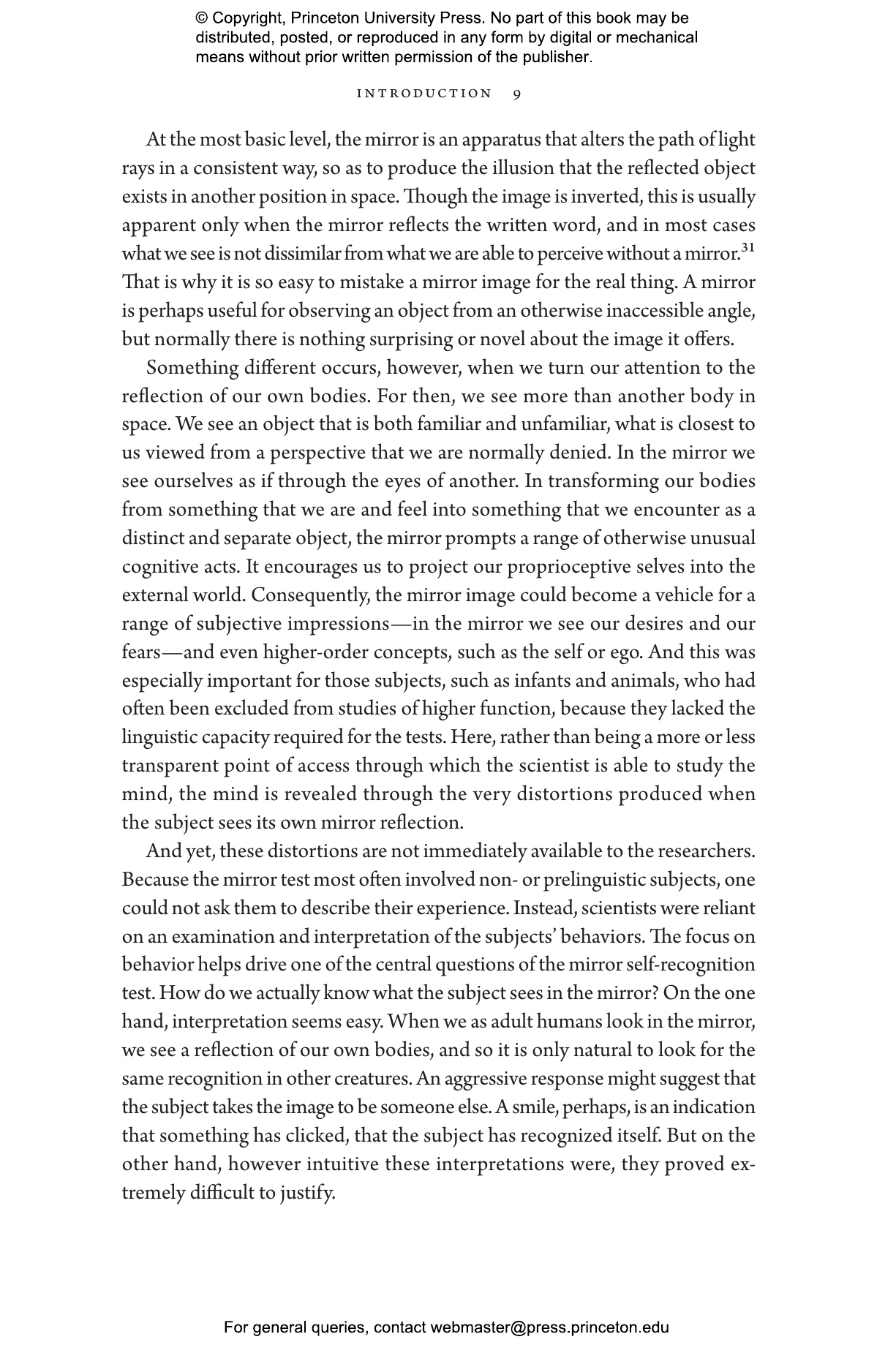 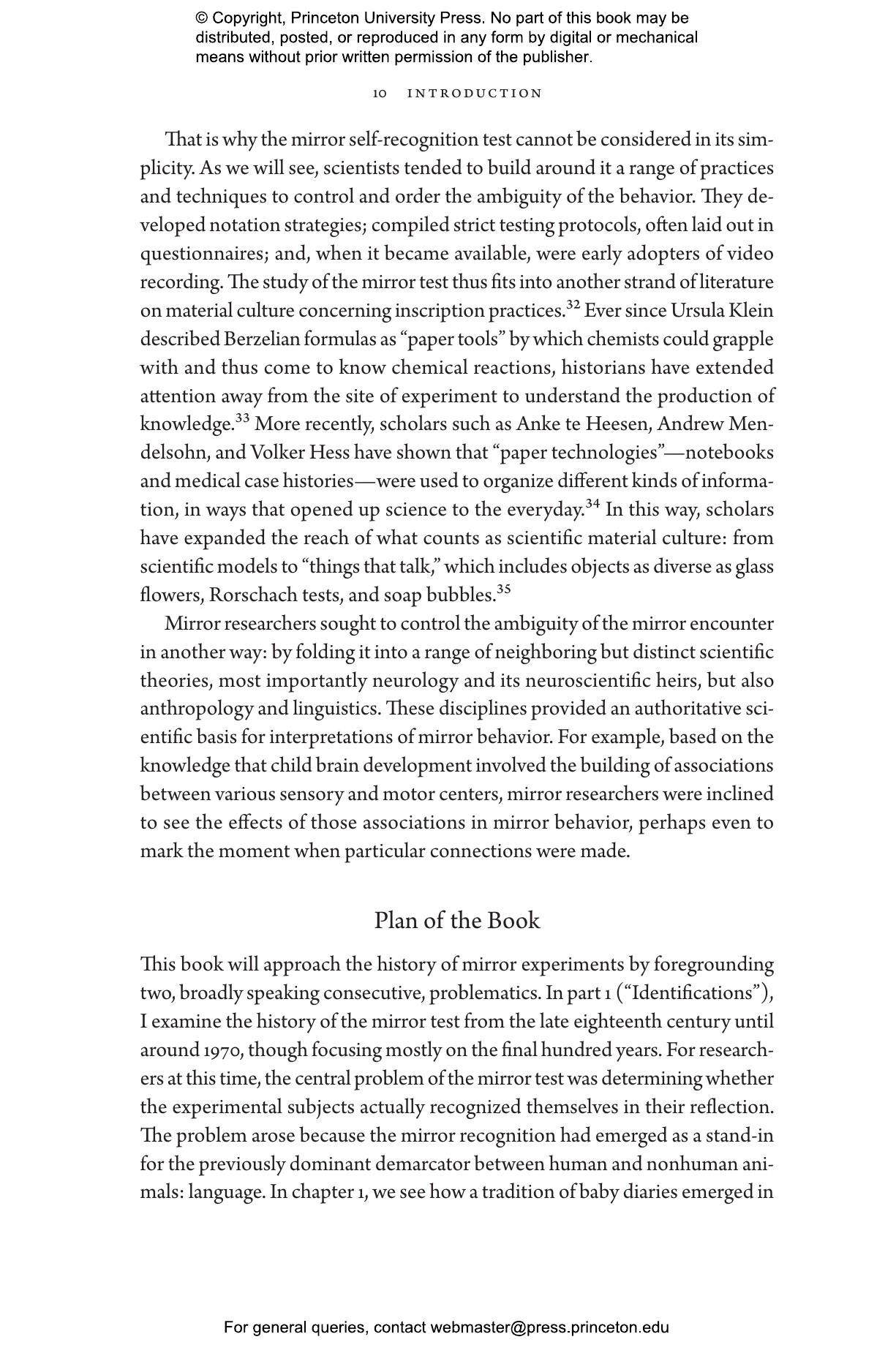 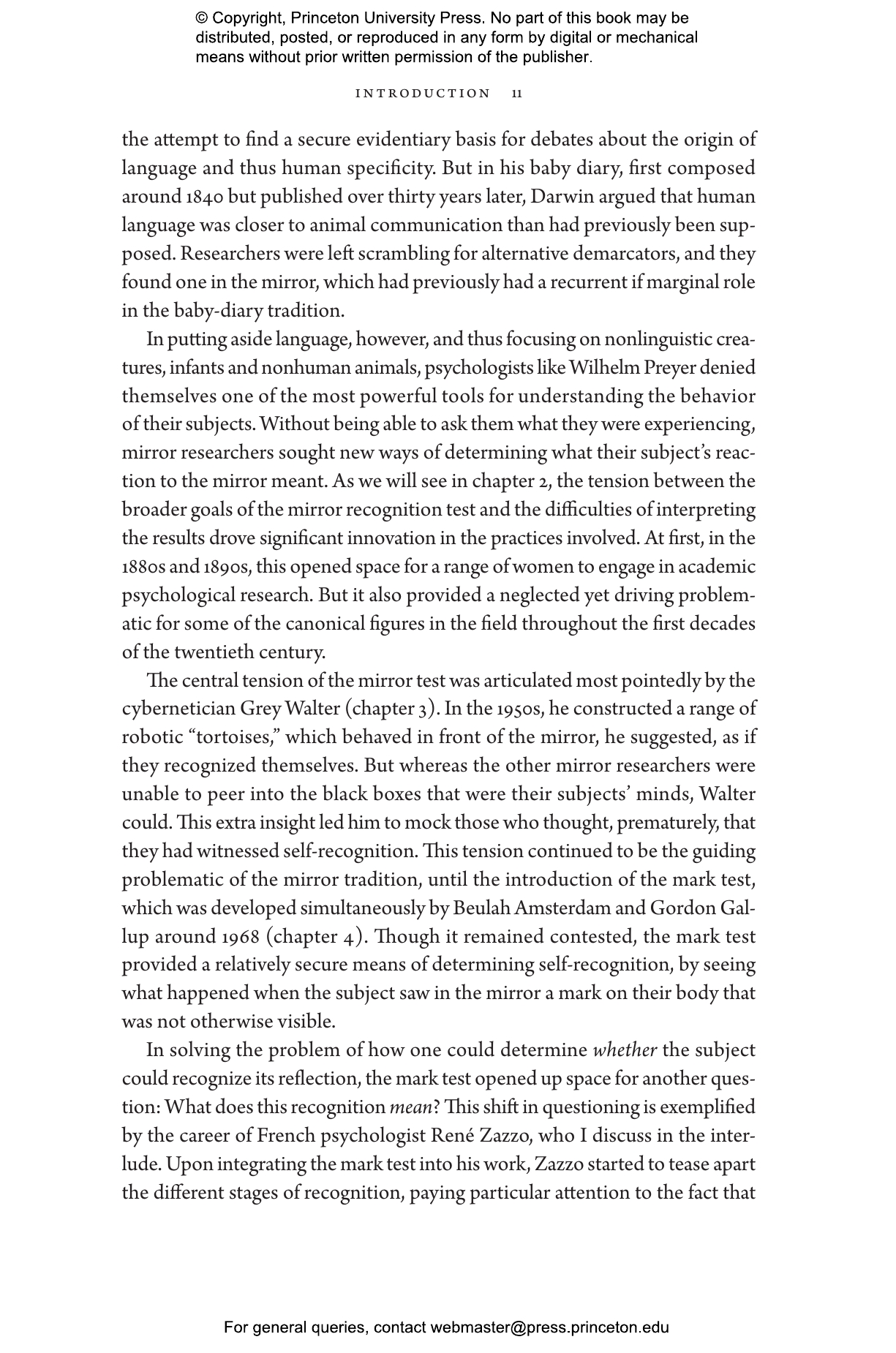 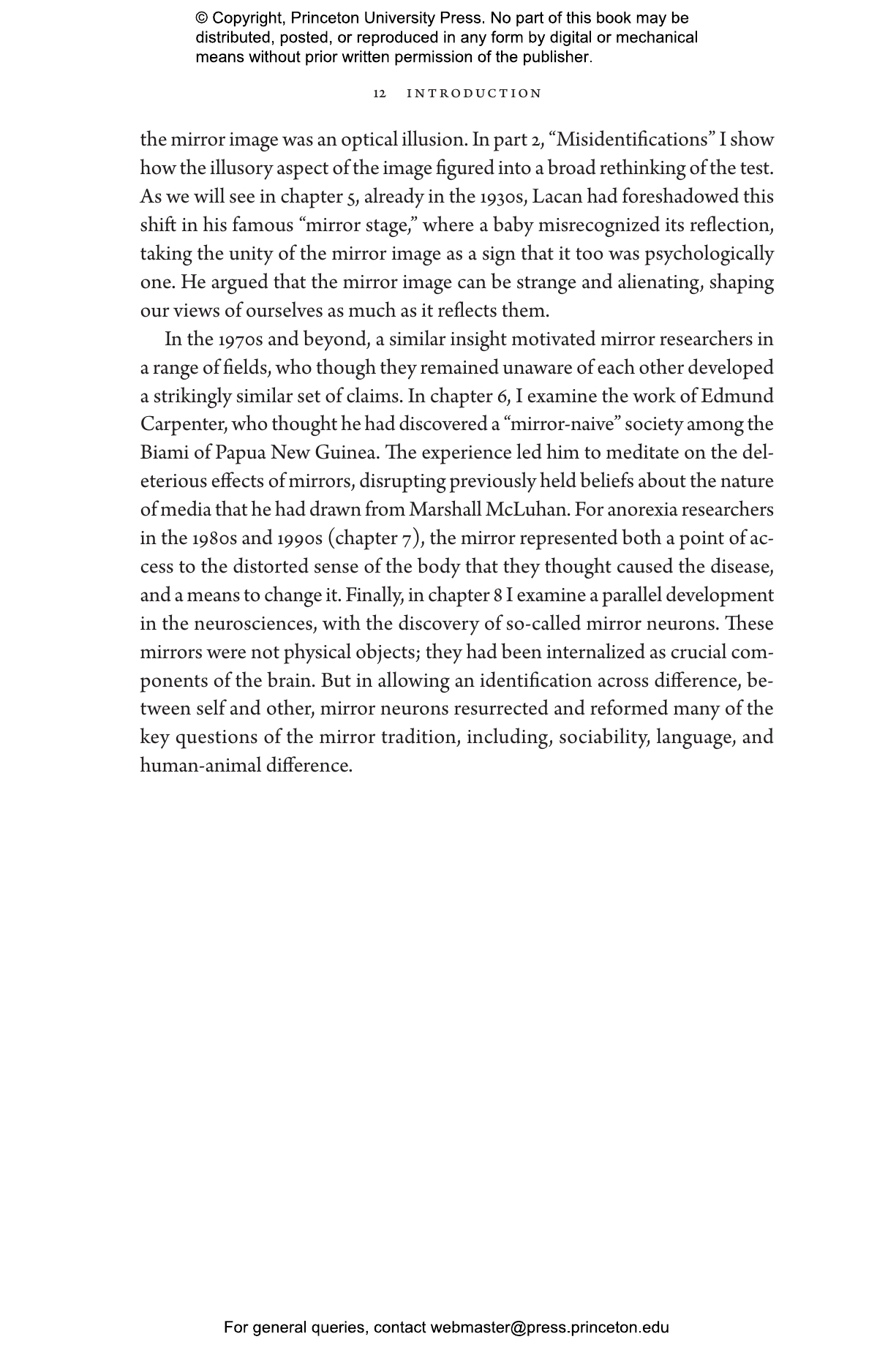 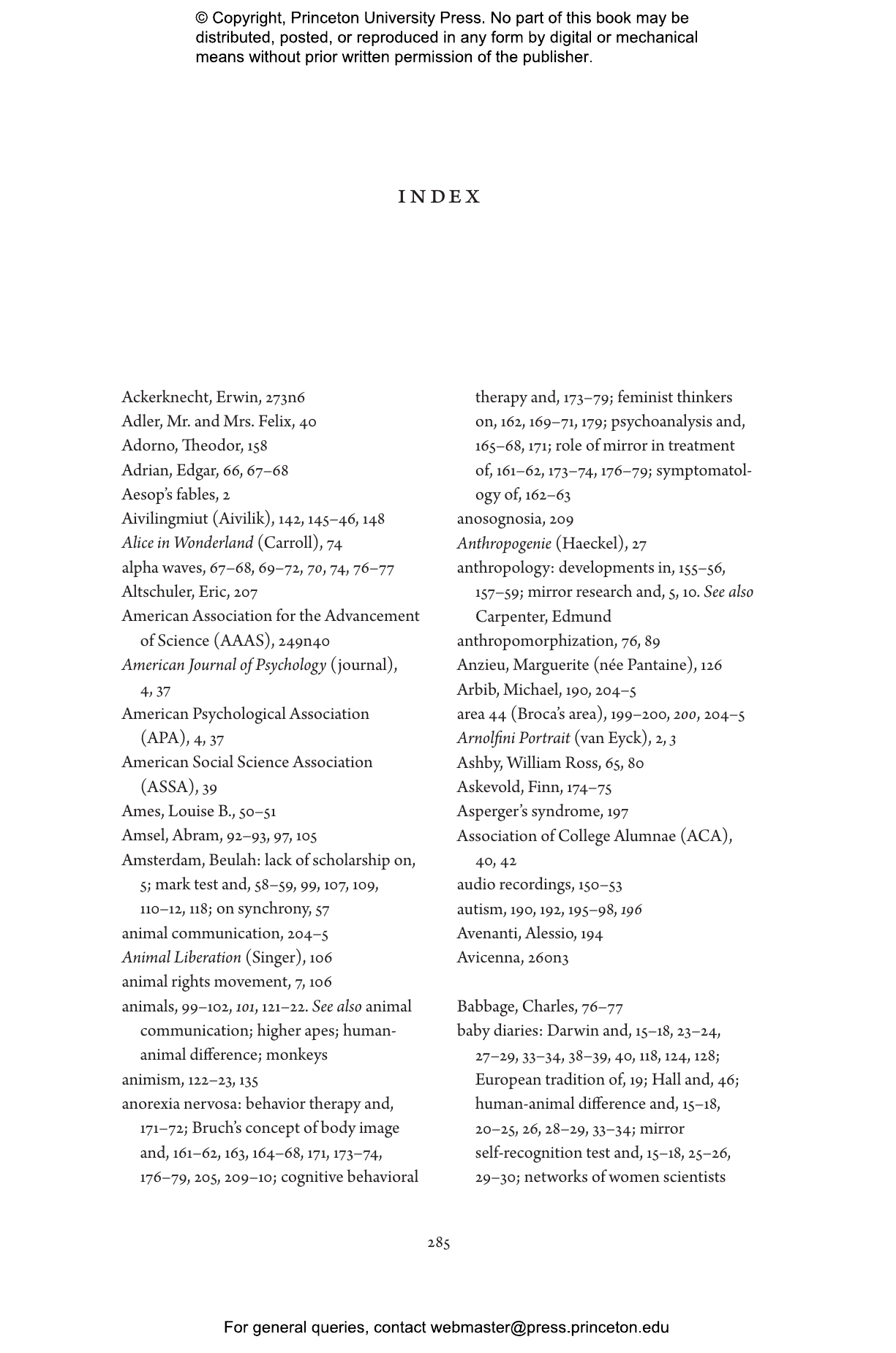 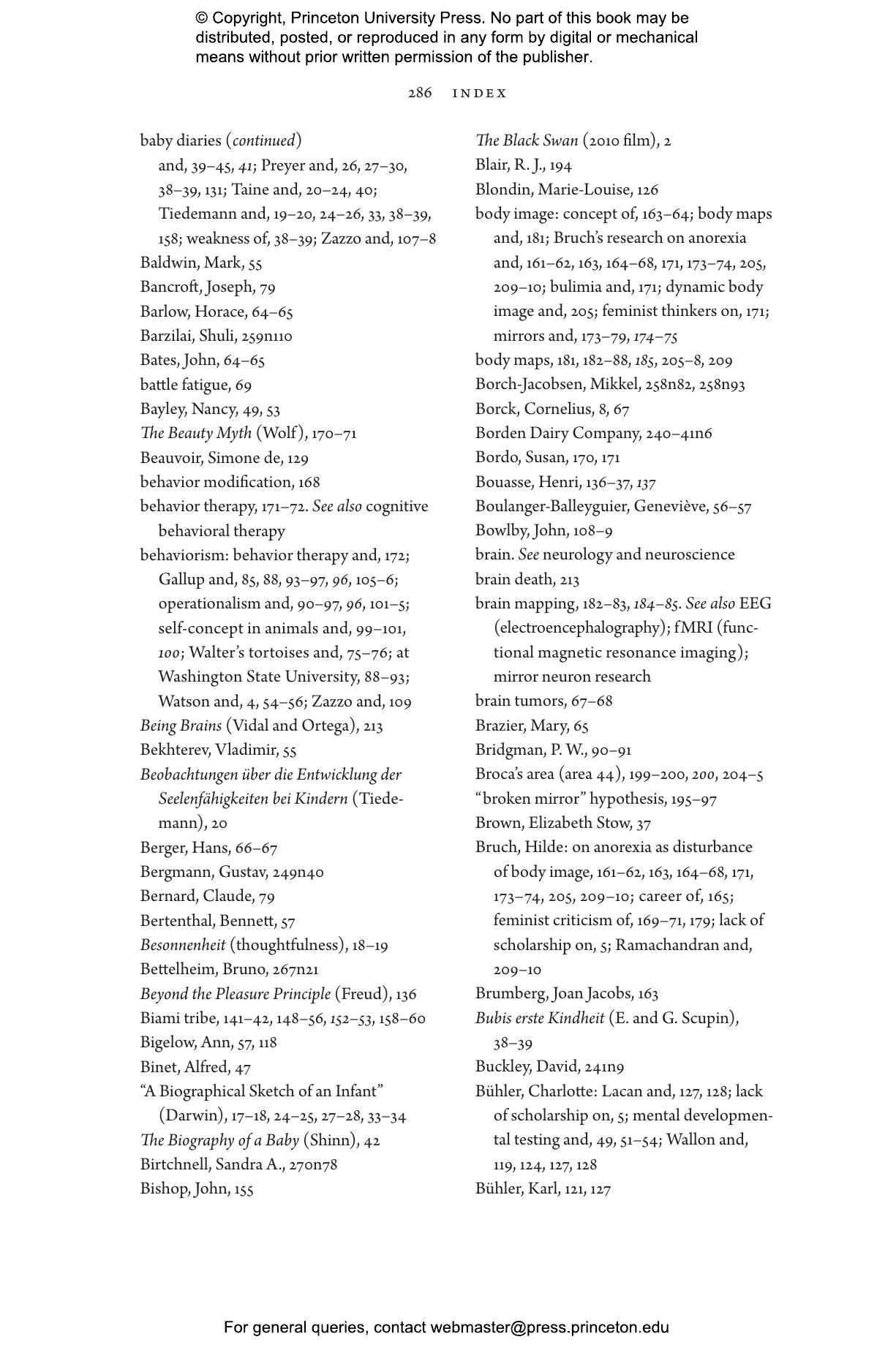 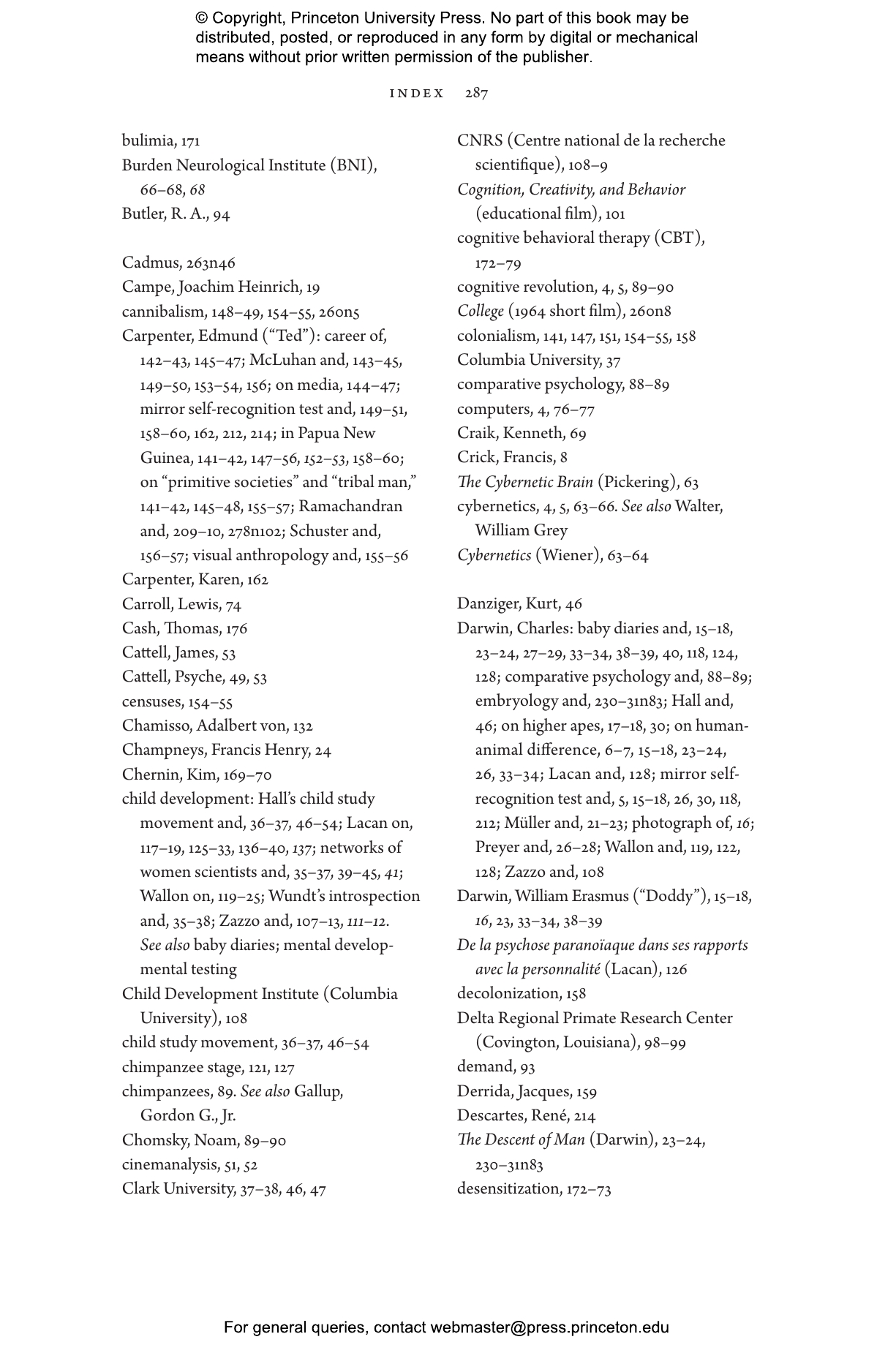 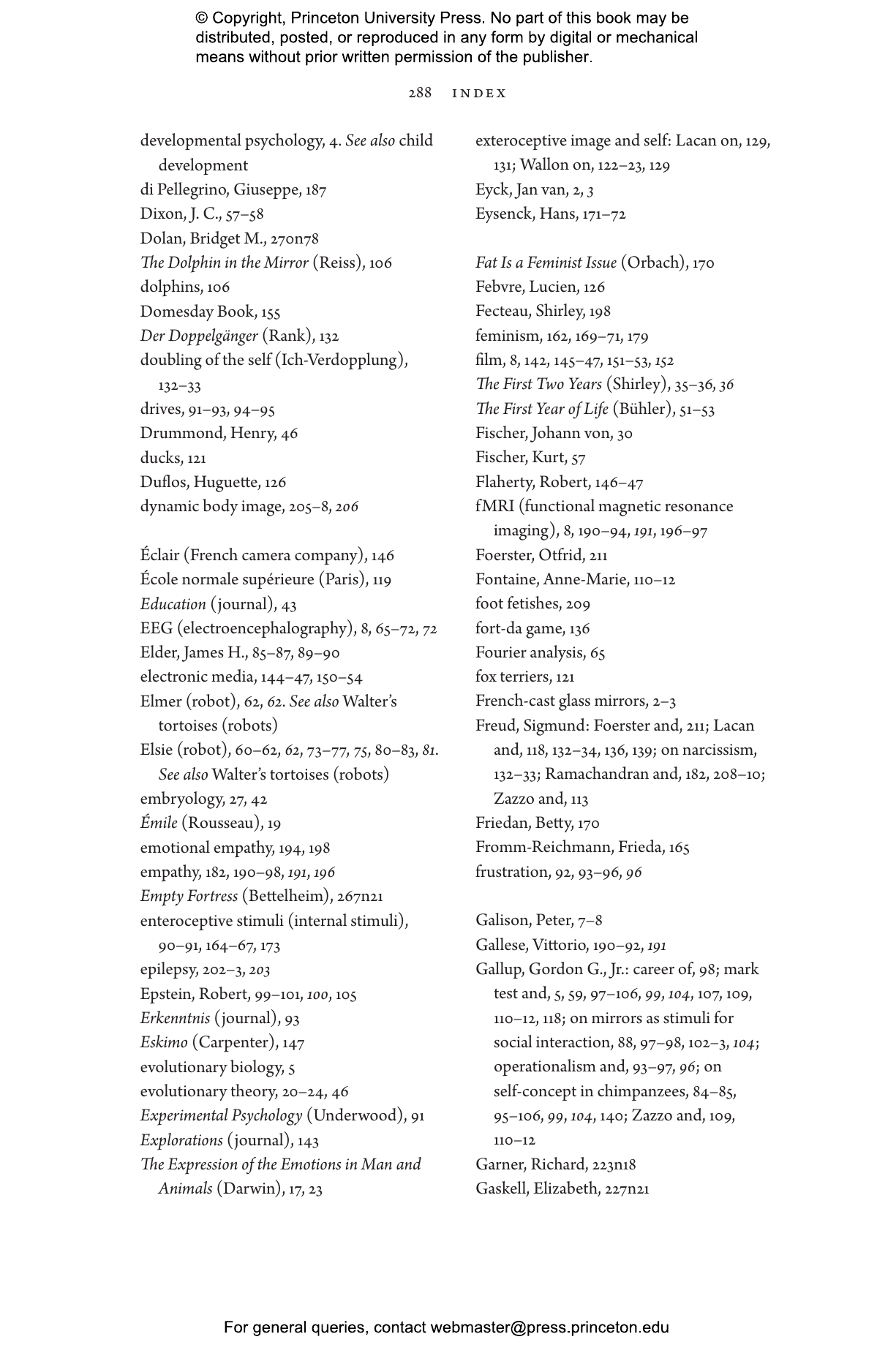 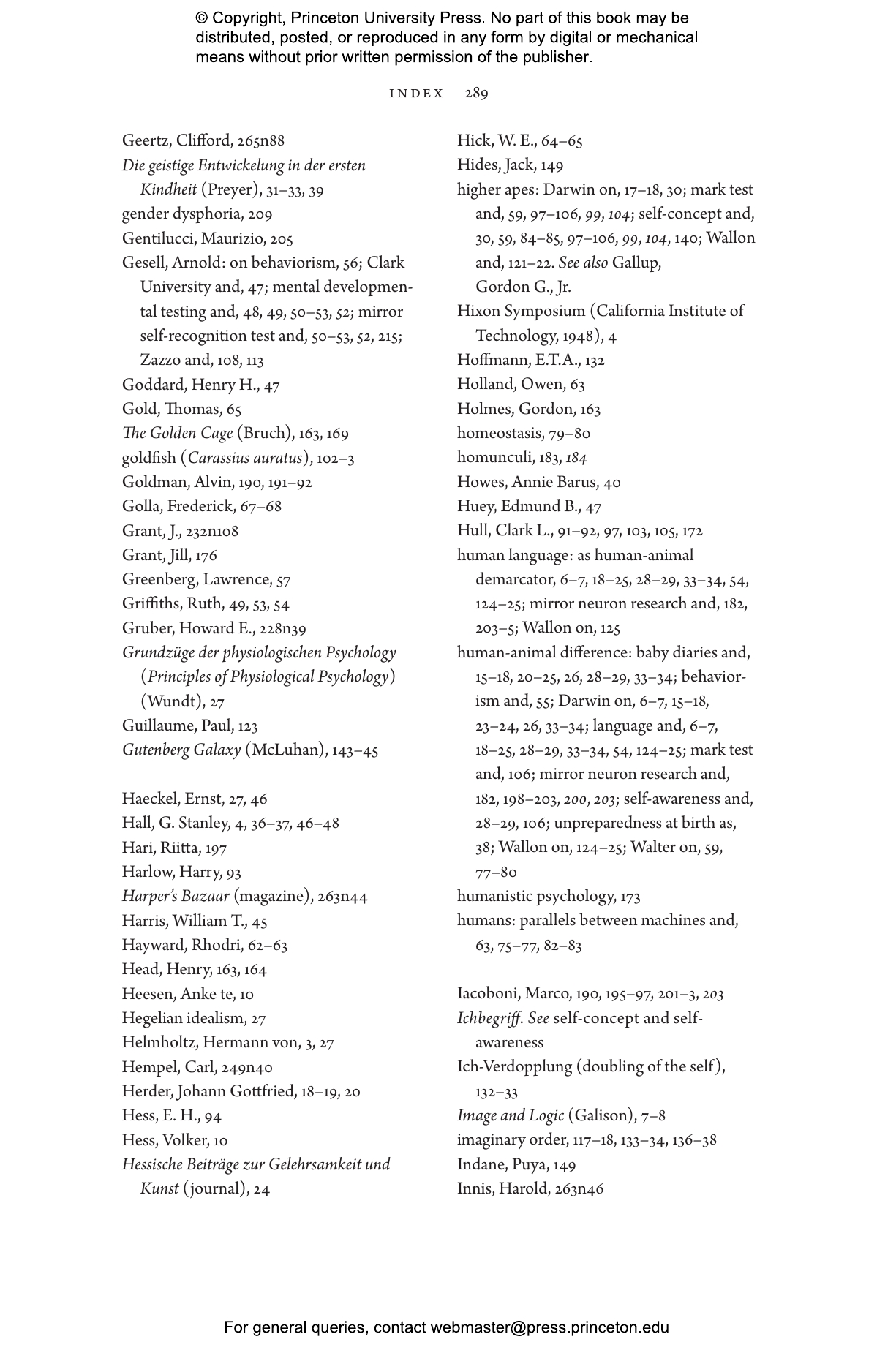 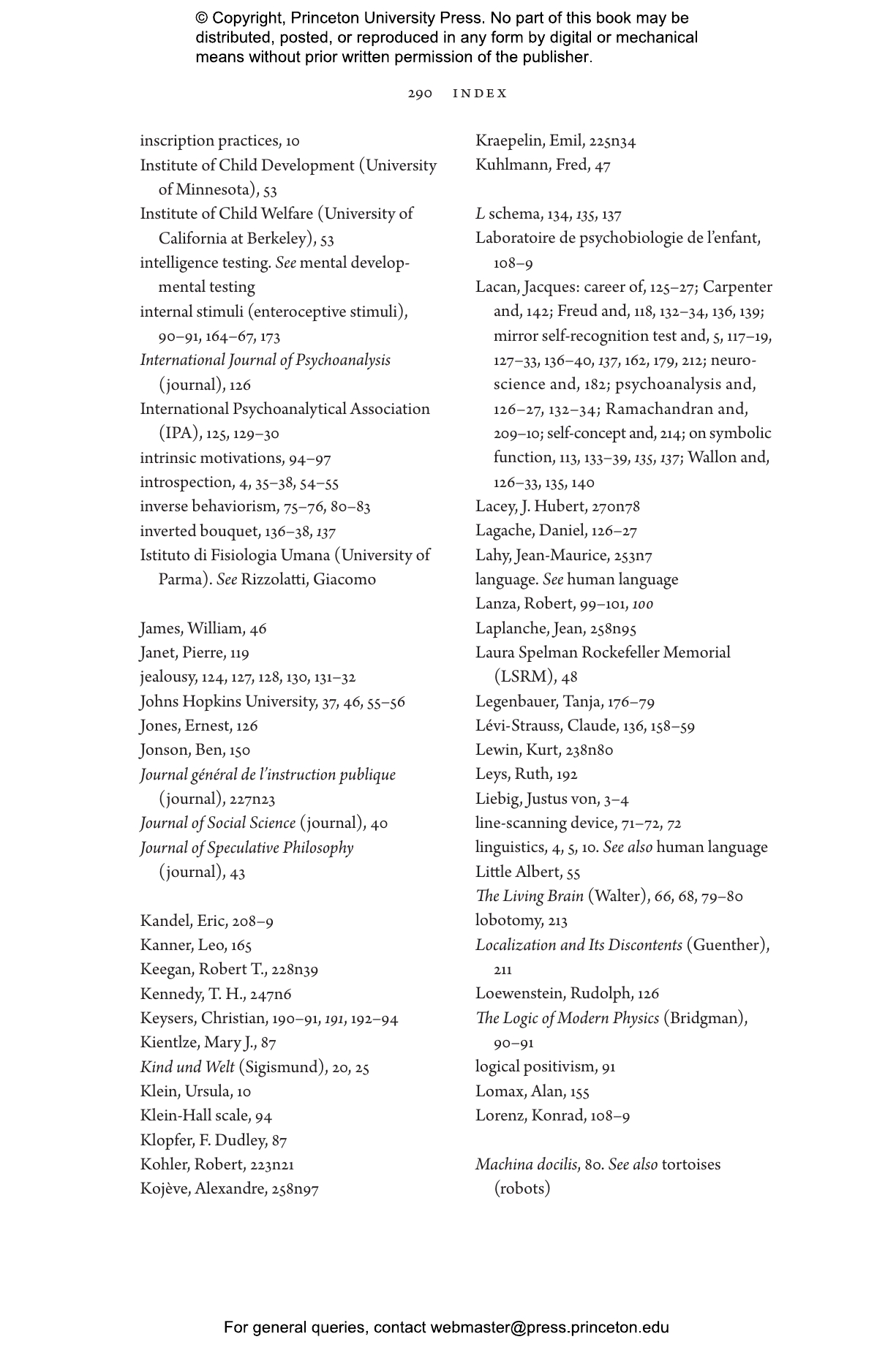 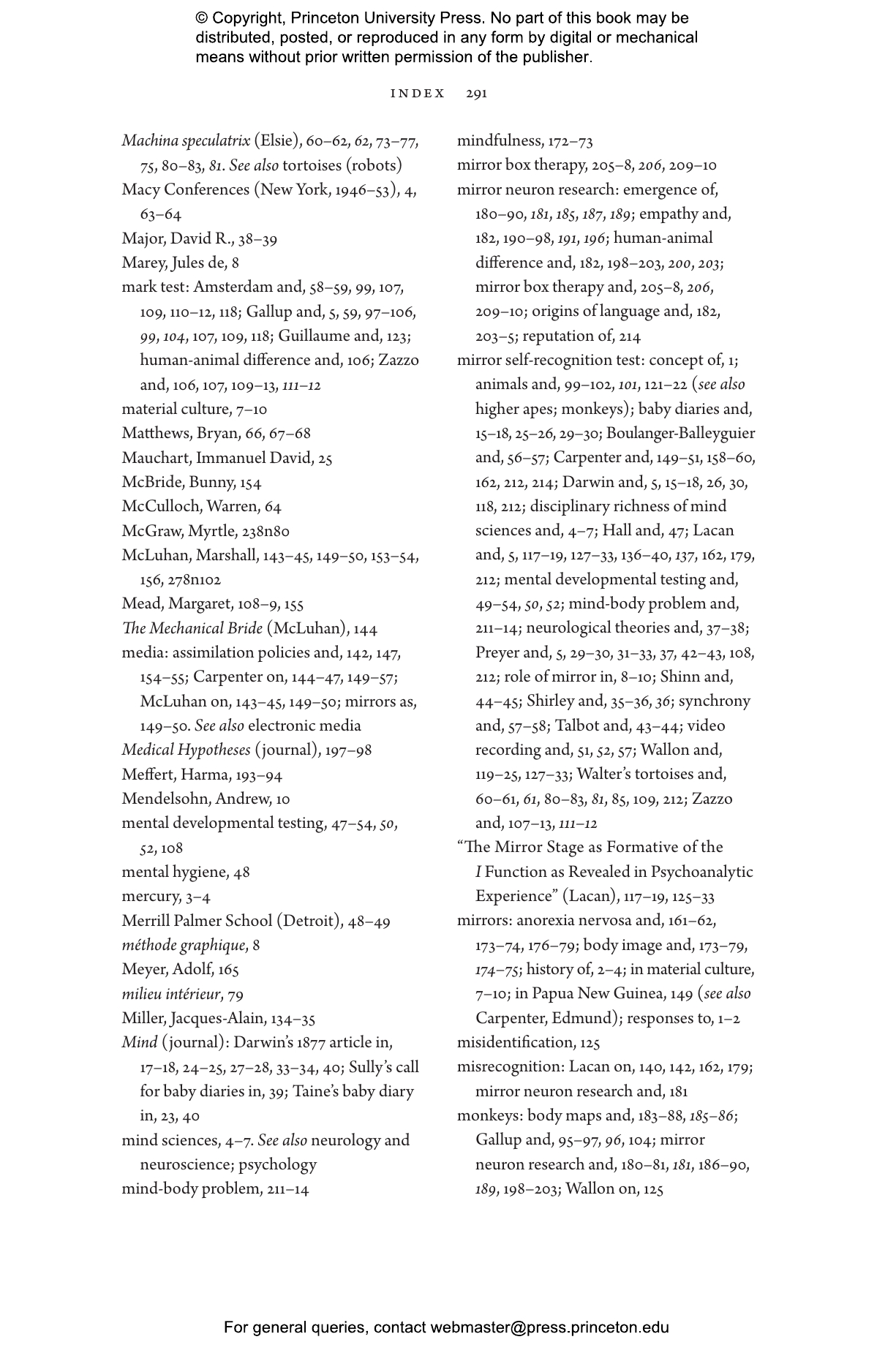 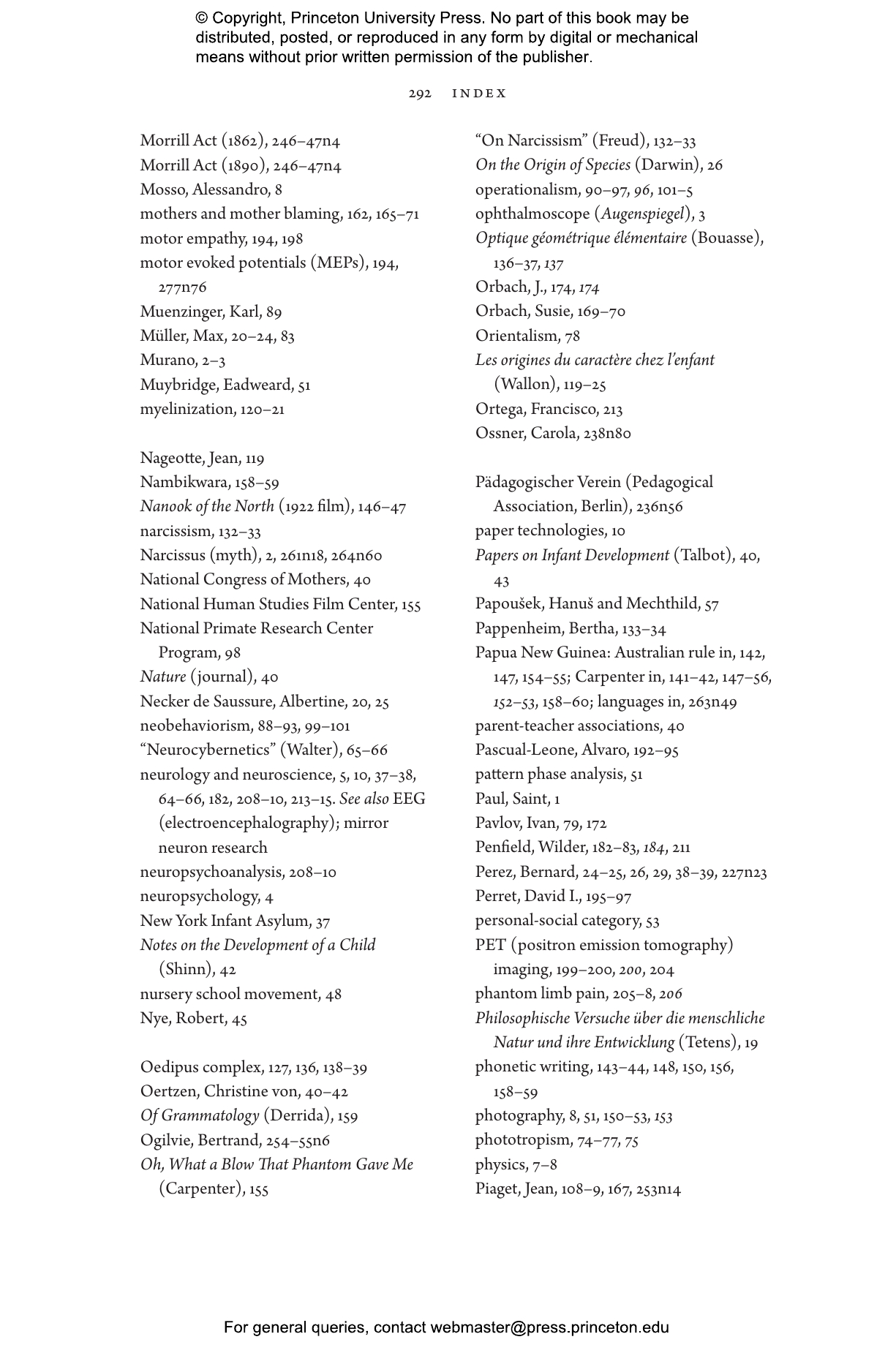 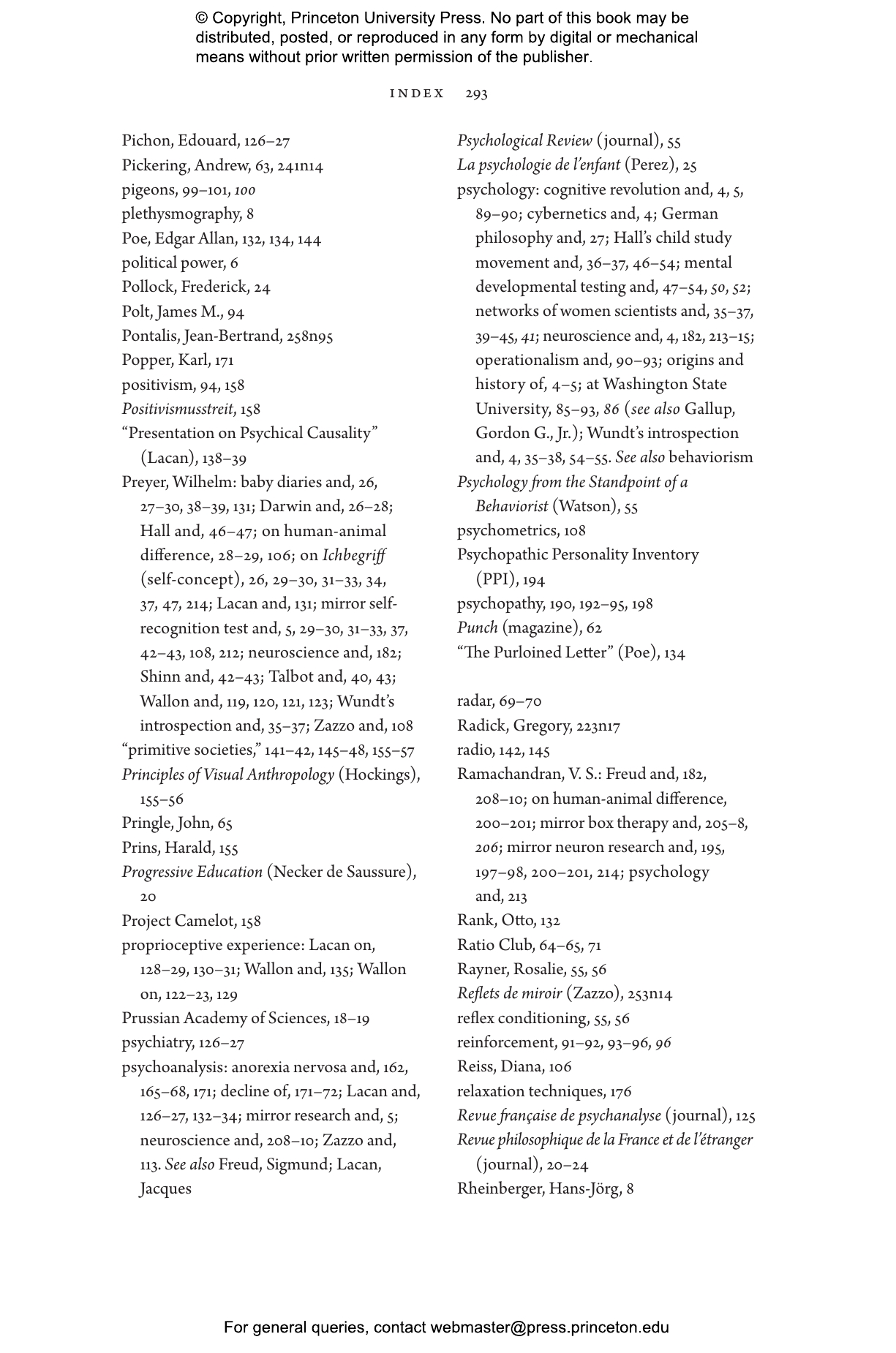 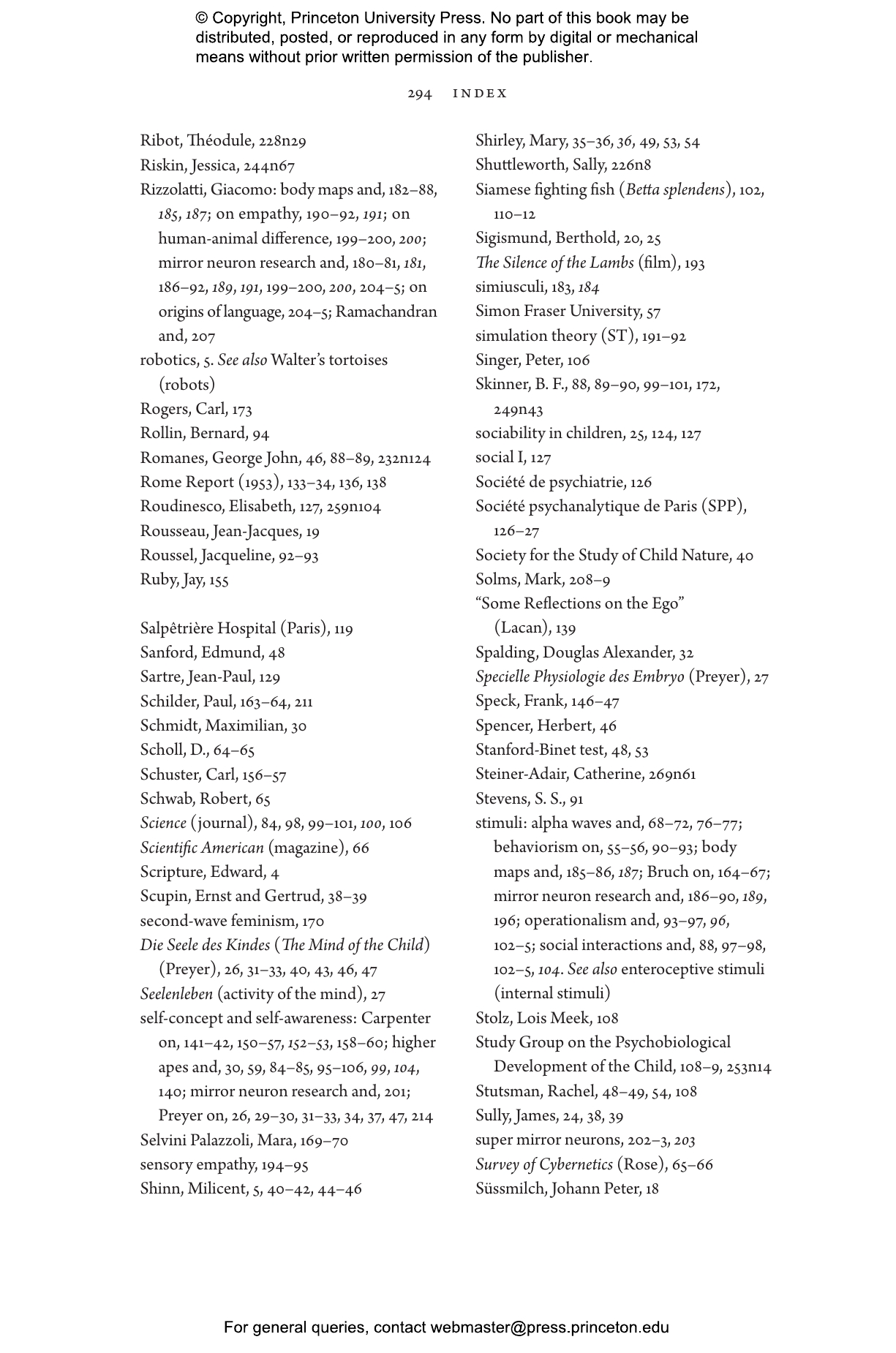 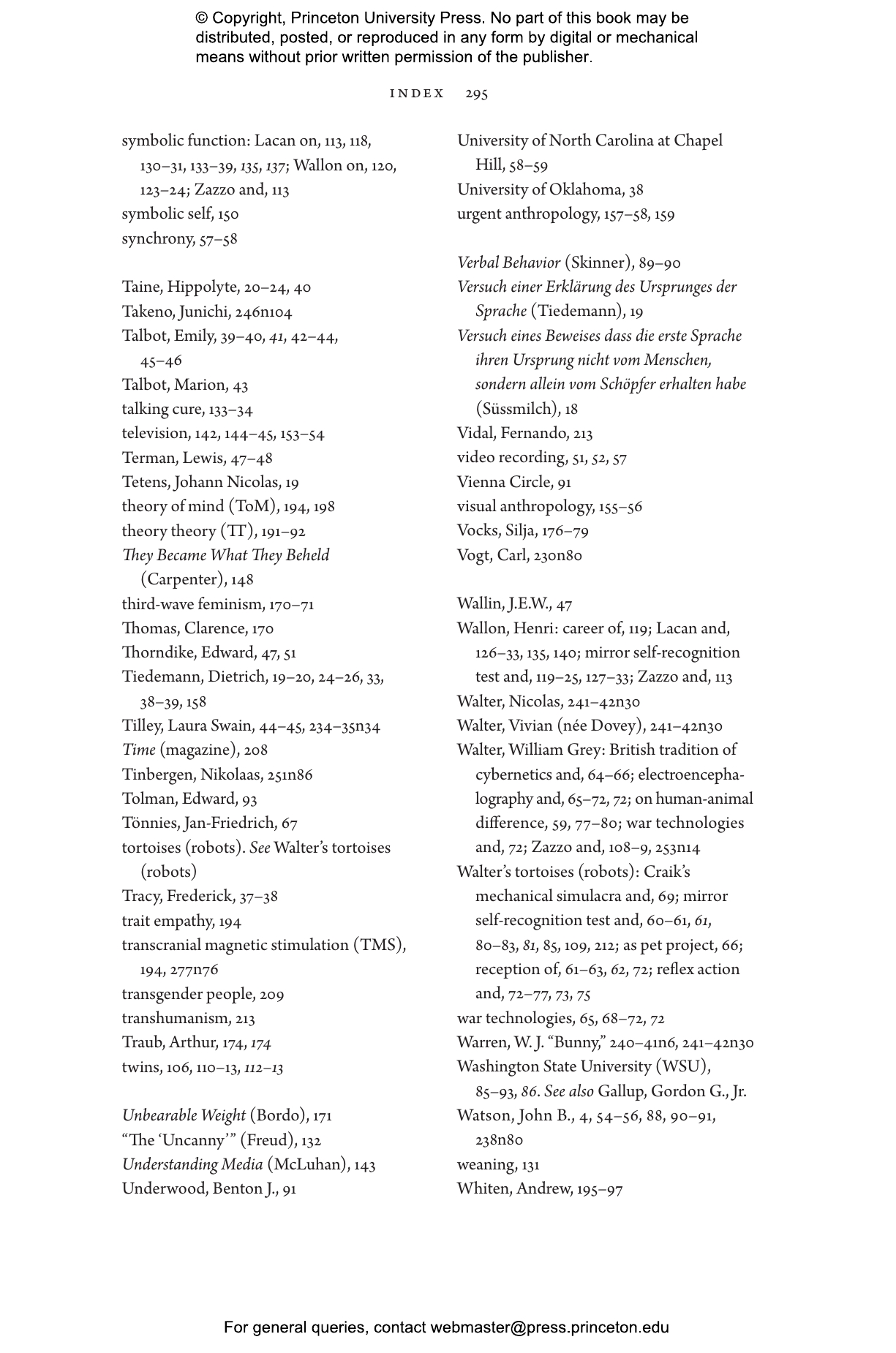 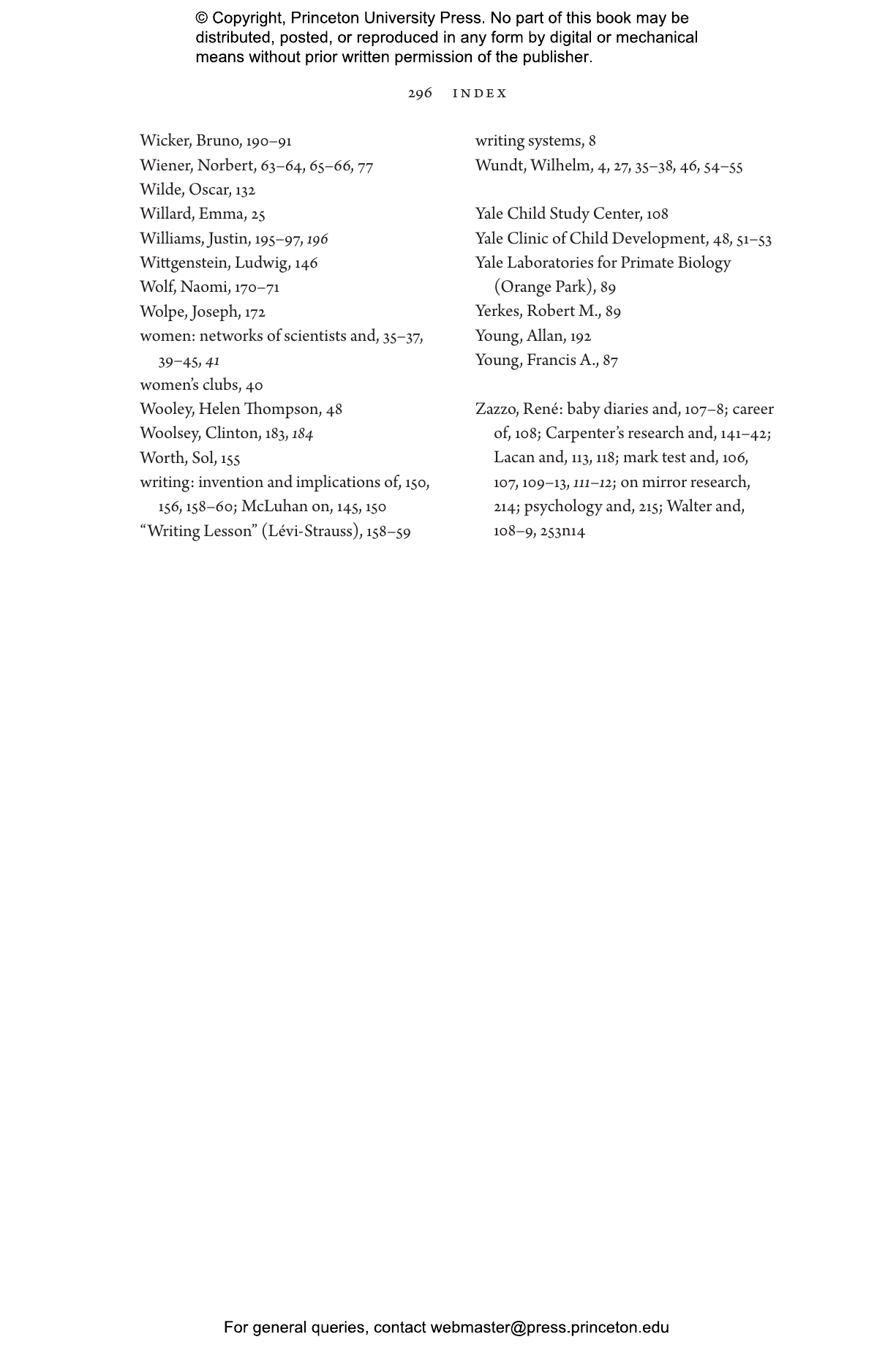 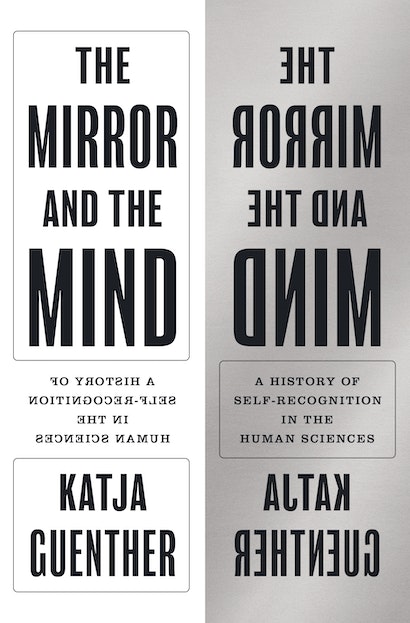 Since the late eighteenth century, scientists have placed subjects—humans, infants, animals, and robots—in front of mirrors in order to look for signs of self-recognition. Mirrors served as the possible means for answering the question: What makes us human? In The Mirror and the Mind, Katja Guenther traces the history of the mirror self-recognition test, exploring how researchers from a range of disciplines—psychoanalysis, psychiatry, developmental and animal psychology, cybernetics, anthropology, and neuroscience—came to read the peculiar behaviors elicited by mirrors. Investigating the ways mirrors could lead to both identification and misidentification, Guenther looks at how such experiments ultimately failed to determine human specificity.

The mirror test was thrust into the limelight when Charles Darwin challenged the idea that language sets humans apart. Thereafter the mirror, previously a recurrent if marginal scientific tool, became dominant in attempts to demarcate humans from other animals. But because researchers could not rely on language to determine what their nonspeaking subjects were experiencing, they had to come up with significant innovations, including notation strategies, testing protocols, and the linking of scientific theories across disciplines. From the robotic tortoises of Grey Walter and the mark test of Beulah Amsterdam and Gordon Gallup, to anorexia research and mirror neurons, the mirror test offers a window into the emergence of such fields as biology, psychology, psychiatry, animal studies, cognitive science, and neuroscience.

The Mirror and the Mind offers an intriguing history of experiments in self-awareness and the advancements of the human sciences across more than a century.

Katja Guenther is professor of the history of science at Princeton University. She is the author of Localization and Its Discontents: A Genealogy of Psychoanalysis and the Neuro Disciplines. She lives in Princeton, New Jersey. 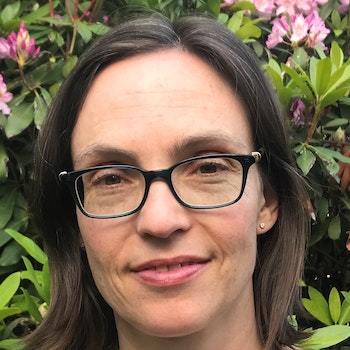 “Guenther demonstrates in very clear terms the value of the mirror test in the making of modern knowledge, as well as how one can use an epistemic object of its sort for a highly readable history. The Mirror and the Mind is a very impressive book—it is at once broadly and deeply researched, full of brilliant analyses, and a joy to read.”—Stefanos Geroulanos, director of the Remarque Institute, New York University

“Guenther’s exploration of self-recognition takes the reader on a fascinating, unexpected, generative journey through the history of the mind sciences, with revelations as delightful as they are profound at every bend in the road.”—Cathy Gere, author of Knossos and the Prophets of Modernism

“Who can recognize themselves in a mirror? In this brilliant and intrepid study, Katja Guenther shows that a test once relied upon to prove that humans are distinct from other animals offered recurrent other uses in the history of psychology. The results are an astonishingly original reinterpretation of the trajectory of a discipline over more than a century.”—Samuel Moyn, author of Not Enough: Human Rights in an Unequal World