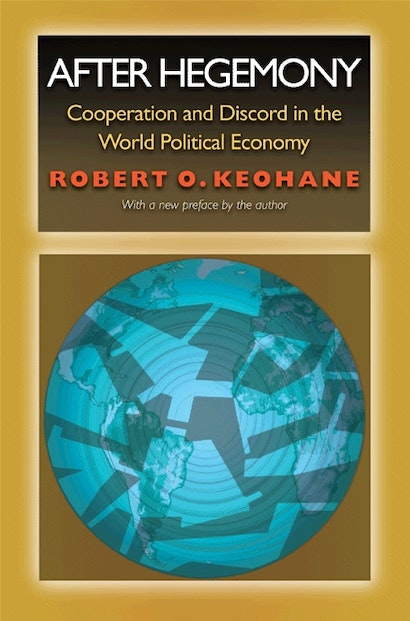 This book is a comprehensive study of cooperation among the advanced capitalist countries. Can cooperation persist without the dominance of a single power, such as the United States after World War II? To answer this pressing question, Robert Keohane analyzes the institutions, or “international regimes,” through which cooperation has taken place in the world political economy and describes the evolution of these regimes as American hegemony has eroded. Refuting the idea that the decline of hegemony makes cooperation impossible, he views international regimes not as weak substitutes for world government but as devices for facilitating decentralized cooperation among egoistic actors. In the preface the author addresses the issue of cooperation after the end of the Soviet empire and with the renewed dominance of the United States, in security matters, as well as recent scholarship on cooperation.

Robert O. Keohane is Professor of International Affairs at the Woodrow Wilson School of Public and International Affairs, Princeton University. He is the author, with Gary King and Sidney Verba, of Designing Social Inquiry: Scientific Inference in Qualitative Research (Princeton) as well as the author, with Joseph S. Nye, Jr., of Power and Interdependence (Addison-Wesley).

"Can cooperation increase if there is no hegemony? Yes, says Professor Keohane in this outstanding book. . . . The author's painstaking consideration of difficulties and objections should show how often narrow assumptions and obscurantist jargon have led to loose thinking and worse policy conclusions."—Foreign Affairs

"[T]he 'state-of-the-art' publication on the influential, and somewhat controversial, idea of 'regime' in the study of international political economy. The concept is provided with its most thoroughgoing, cogent and stimulating defence."—R. J. Barry Jones, Political Studies

"This is vital and powerful stuff. It makes a major contribution towards breaking the destructive polarization between realism and idealism which for far too long has obscured intellectual middle ground of real importance to policy-making."—Barry Buzan, International Affairs

"This book takes a major step toward bringing economic reasoning and understanding of politics to bear on questions of international political economy."—James E. Alt, Journal of Economic Literature

"From review of Princeton's original edition: "The 'state of the art' publication on the influential, and somewhat controversial, idea of 'regime' in the study of international political economy.""—Political Studies