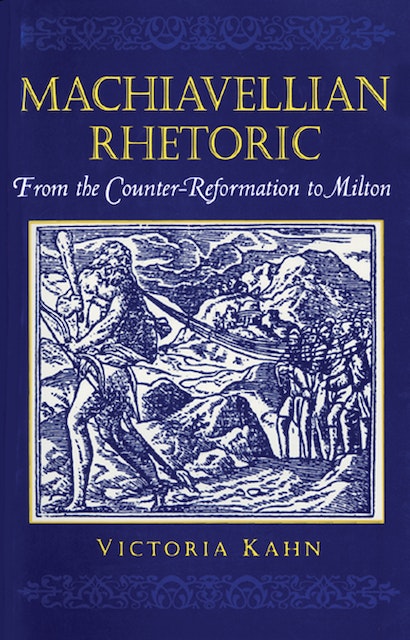 
In this revised history, Machiavelli offers a rhetoric for dealing with the realm of de facto political power, rather than a political theory with a coherent thematic content; and Renaissance Machiavellism includes a variety of rhetorically sophisticated appreciations and appropriations of Machiavelli’s own rhetorical approach to politics. Part I offers readings of The Prince, The Discourses, and Counter-Reformation responses to Machiavelli. Part II discusses the reception of Machiavelli in sixteenth-and seventeenth-century England. Part III focuses on Milton, especially Areopagitica, Comus, and Paradise Lost.

Victoria Kahn is Professor of English and Comparative Literature at Princeton University. She is the author of Rhetoric, Prudence, and Skepticism in the Renaissance (Cornell) and co-editor, with Albert Ascoli, of Machiavelli and the Discourse of Literature (Cornell).

"Victoria Kahn's book will be the definitive study of Machiavellism in the Renaissance for our generation of scholarship."—Leonard Tennenhouse, Brown University