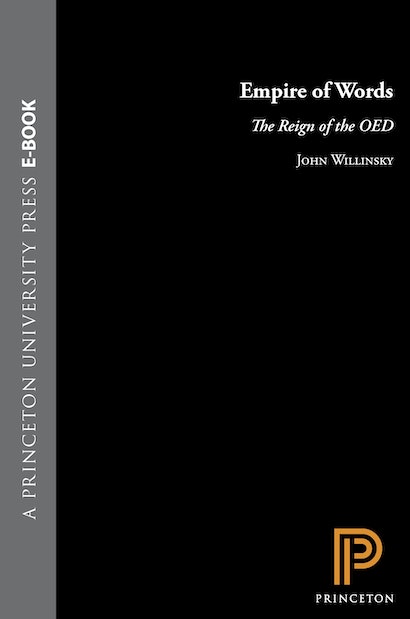 What is the meaning of a word? Most readers turn to the dictionary for authoritative meanings and correct usage. But what is the source of authority in dictionaries? Some dictionaries employ panels of experts to fix meaning and prescribe usage, others rely on derivation through etymology. But perhaps no other dictionary has done more to standardize the English language than the formidable twenty-volume Oxford English Dictionary in its 1989 second edition. Yet this most Victorian of modern dictionaries derives its meaning by citing the earliest known usage of words and by demonstrating shades of meaning through an awesome database of over five million examples of usage in context. In this fascinating study, John Willinsky challenges the authority of this imperial dictionary, revealing many of its inherent prejudices and questioning the assumptions of its ongoing revision. “Clearly, the OED is no simple record of the language `as she is spoke,’” Willinsky writes. “It is a selective representation reflecting certain elusive ideas about the nature of the English language and people. Empire of Words reveals, by statistic and table, incident and anecdote, how serendipitous, judgmental, and telling a task editing a dictionary such as the OED can be.”


Willinsky analyzes the favored citation records from the three editorial periods of the OED’s compilation: the Victorian, imperial first edition; the modern supplement; and the contemporary second edition composed on an electronic database. He reveals shifts in linguistic authority: the original edition relied on English literature and, surprisingly, on translations, reference works, and journalism; the modern editions have shifted emphasis to American sources and periodicals while continuing to neglect women, workers, and other English-speaking countries.


Willinsky’s dissection of dictionary entries exposes contradictions and ambiguities in the move from citation to definition. He points out that Shakespeare, the most frequently cited authority in the OED, often confounds the dictionary’s simple sense of meaning with his wit and artfulness. He shows us how the most famous four-letter words in the language found their way through a belabored editorial process, sweating and grunting, into the supplement to the OED. Willinsky sheds considerable light on how the OED continues to shape the English language through the sometimes idiosyncratic, often biased selection of citations by hired readers and impassioned friends of the language.


Anyone who is fascinated with words and language will find Willinsky’s tour through the OED a delightful and stimulating experience. No one who reads this book will ever feel quite the same about Murray’s web of words.

John Willinsky is Professor and Director of the Centre for the Study of Curriculum and Instruction at the University of British Columbia. Among his books are The Well-Tempered Tongue: The Politics of Standard English in High School, The Triumph of Literature/The Fate of Literacy, and The New Literacy.

"Willinsky . . . focuses on the source of the OED's authority—its imposing database of over five million examples of words used in context. . . . By scrutinizing OED entries, he exposes ambiguity and contradiction between citations and definitions and shows a nearly complete neglect of women and workers. Replete with statistical content analysis as well as engaging anecdotes."—Library Journal

". . . a scholarly study of the more than two million citations in the dictionary that are used to show shades of meanings of words. Willinsky questions the authority of the OED by demonstrating how idiosyncratic the choice of citations often has been."—Booklist

"[This] provocative new book dares question the OED; it raises some points that even the most devoted user of the great dictionary might want to consider."—Olin Chism, Dallas Morning News

"This lively polemic amounts to an attack on the OED as a formidable weapon of the English establishment."—The Glasgow Herald

"[In] this ambitious book . . . Willinsky argues that the OED gives unwarranted legitimacy to both the outlook of those who compiled it and the sources they drew upon. . . . Willinsky lays bare much more about language and society than can be mentioned in a small space. Thoroughly and inventively researched, his book deserves a home, if there's room, on the shelf beside the great dictionary itself."—Boston Globe

"John Willinsky . . . offers a study of the Oxford English Dictionary and how it got that way, its often subtle omissions and prejudices, and the absolute vastness of its achievement. . . . Willinsky has made a significant contribution to the appreciation and enjoyment of our language. . . . If you're a word nut, you need it. Even if you're only casually interested in our language, there are scores of tidbits that will intrigue."—Los Angeles Times

"The heart of the [OED] is its citations—the examples it gives of the words it is defining; for, as in any good dictionary, it is these that ultimately determine the definitions. . . . But, says Professor John Willinsky in Empire of Words, the citations in the . . . OED . . . were far too narrowly chosen. . . . Some would say there was not much wrong with that. Yes, there is, says Willinsky. It marks the OED as elitist, masculine in its emphasis, chauvinistic, imperialist even, and in a general way insulting to minority groups."—Nicholas Bagnall, The Sunday Telegraph

"[In] Empire of Words: The Reign of the OED [John Willinsky] takes an affectionate but candid look at the great book's shortcomings. . . . He approaches his study of the OED through a close examination of its principal sources of authority for its definitions. . . . It's time, he believes, to make room in the OED for the English of wider global use."—Max Wyman, Vancouver Sun

"John Willinsky . . . shows [that] The Dictionary is deeply and unavoidably flawed. Its architecture remains distinctly Victorian, and anyone using The Dictionary as a tool, or even a temple, needs to know the colour and slant of the windows they're looking through. . . . The OED is a brilliant, majestic, endlessly fascinating homage to a seriously wordy language. Empire of Words regularly applauds that achievement, while carefully posting much-needed warning signs all over it. . . . Willinsky is scholarly without ever being dry, writing with wit, elegance and unfailing insight. You couldn't ask for a better, more genial guide."—Randy Harris, Globe and Mail

"What [John Willinsky] found—after years of old-fashioned study bolstered by a sophisticated computer analysis of the entire OED text—is fascinating and disconcerting. . . . [While he] never undermines or obscures the amazing enterprise that is the OED . . . [he] documents the human foibles undergirding the selection of [its] famous illustrative quotations."—Steve Weinberg, Star