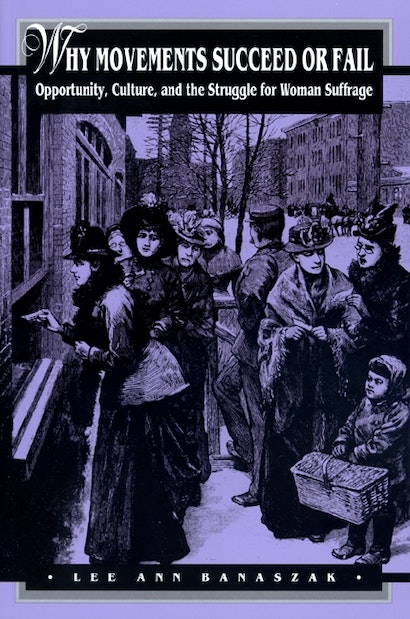 Wyoming became the first American state to adopt female suffrage in 1869 — a time when no country permitted women to vote. When the last Swiss canton enfranchised women in 1990, few countries barred women from the polls. Why did pro-suffrage activists in the United States and Switzerland have such varying success? Comparing suffrage campaigns in forty-eight American states and twenty-five Swiss cantons, Lee Ann Banaszak argues that movement tactics, beliefs, and values are critical in understanding why political movements succeed or fail. The Swiss suffrage movement’s beliefs in consensus politics and local autonomy and their reliance on government parties for information limited their tactical choices — often in surprising ways. In comparison, the American suffrage movement, with its alliances to the abolition, temperance, and progressive movements, overcame beliefs in local autonomy and engaged in a wider array of confrontational tactics in the struggle for the vote.

Drawing on interviews with sixty Swiss suffrage activists, detailed legislative histories, census materials, and original archival materials from both countries, Banaszak blends qualitative historical inquiry with informative statistical analyses of state and cantonal level data. The book expands our understanding of the role of political opportunities and how they interact with the beliefs and values of movements and the societies they seek to change.

"In this comparative analysis, Lee Ann Banaszak explores why woman suffrage came to Switzerland so much later than the United States. . . . [She] provides a wealth of information organized by a keen analytical mind and informed by strong theoretical preferences."—American Historical Review