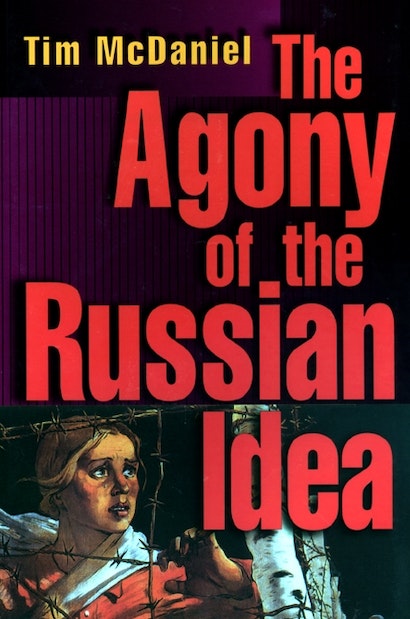 Boris Yeltsin’s attempts at democratic reform have plunged a long troubled Russia even further into turmoil. This dramatic break with the Soviet past has left Russia politically fragmented and riddled with corruption, its people with little hope for the future. In a fascinating account for anyone interested in Russia’s current political struggles, Tim McDaniel explores the inability of all its leaders over the last two centuries — tsars and Communist rulers alike — to create the foundations of a viable modern society. The problem then and now, he argues, is rooted in a cultural trap endemic to Russian society and linked to a unique sense of destiny embodied by the “Russian idea.”

In its most basic sense, the Russian idea is the belief that Russia can forge a path in the modern world that sets itself apart from the West through adherence to shared beliefs, community, and equality. These cultural values, according to McDaniel, have mainly reversed the values of Western society rather than having provided a real alternative to them. By relying on the Russian idea in their programs of change, dictatorial governments almost unavoidably precipitated social breakdown.

When the Yeltsin government declared war on the Communist past, it broke with deeply held Russian values and traditions. McDaniel shows that in cutting people off from their pasts and promoting the West as the sole model of modernity, the reformers have simultaneously undermined the foundations of Russian morality and the people’s sense of a future. Unwittingly, the Yeltsin government has thereby annihilated its own authority.

McDaniel lived in Russia for three years during both the Communist and post-Communist periods. Basing his analysis on broad historical research, extensive travels, countless interviews and conversations, and friendships with Russians from all walks of life, McDaniel emphasizes the perils of assuming that Russians understand the world in the same way that we do, and so can and should become like us. Challenging and provocative in its claims, this book is intended for anyone seeking to understand Russia’s attempts to create a new society.

"Readers seeking to understand Russia's identity crisis and how it relates to the underlying consequences of Yeltsin's efforts to change the country have in this book a succinct, elegant, historically sensitive guide."—Robert Legvold, Foreign Affairs

"McDaniel's insights do give the reader a deep understanding of the mentality born of the Russian idea and its overlooked role in Russians' struggle to trust democracy and adapt to the market. His authoritative analysis is an essential resource for understanding the old and new Russia."—Rachel P. Roberts, Current History

"Here is a genuinely intriguing essay. It is, at its best, an extraordinarily stimulating interpretation of the Soviet experience subordinated to a single relatively coherent theme."—Hugh Ragsdale, Russian Review

"A serious, original and provocative work that deserves to be read widely."—Mark R. Beissinger, American Journal of Sociology

"McDaniel examines the agony afflicting the Russian state and people, as both attempt to move toward Western-style capitalism. He suggests that, by failing to take into account unique Russian institutions..., the internal and external "reformers" have created the disruptions and misery of today's Russia....McDaniel's book provides important insight into Russia today and should be read by all interested in and concerned for what is unfolding in a one-time superpower."—Choice

"A superb explanation of Russia, unmatched in its scope and insights."—Daniel Chirot, Jackson School of International Affairs, University of Washington