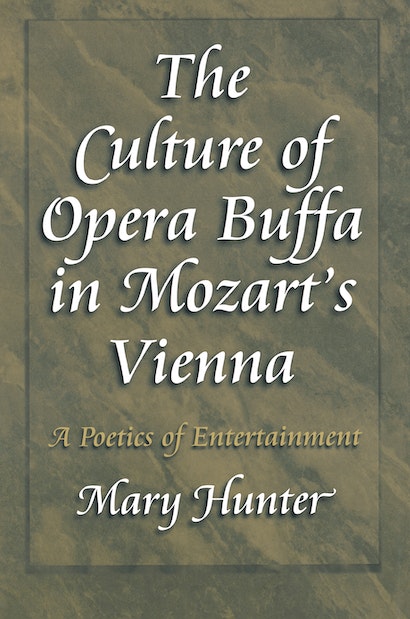 Mozart’s comic operas are among the masterworks of Western civilization, and yet the musical environment in which Mozart and his librettist Lorenzo da Ponte wrote these now-popular operas has received little critical attention. In this richly detailed book, Mary Hunter offers a sweeping, synthetic view of opera buffa in the lively theatrical world of late-eighteenth-century Vienna. Opera buffa (Italian-language comic opera) persistently entertained audiences at a time when Joseph was striving for a German national theater. Hunter attributes opera buffa’s success to its ability to provide “sheer” pleasure and hence explores how the genre functioned as entertainment. She argues that opera buffa, like mainstream film today, projects a social world both recognizable and distinct from reality. It raises important issues while containing them in the “merely entertaining” frame of the occasion, as well as presenting them as a series of easily identifiable dramatic and musical conventions.


Exploring nearly eighty comic operas, Hunter shows how the arias and ensembles convey a multifaceted picture of the repertory’s social values and habits. In a concluding chapter, she discusses Cos” fan tutte as a work profoundly concerned with the conventions of its repertory and with the larger idea of convention itself and reveals the ways Mozart and da Ponte pointedly converse with their immediate contemporaries.

Mary Hunter is Professor of Music at Bowdoin College. She is the editor, with James Webster, of Opera Buffa in Mozart's Vienna.

"Although opera buffa and Mozart's opera in general have been studied by many scholars and from many points of view, Hunter's work, based on such a large bosy of scores, provides new proofs and a unique focus on the entertainment value of the works."—Choice

"Indisputably the most comprehensive discussion yet published on the repertory of Viennese opera that forms the context for Mozart's comic operas."—Eighteenth-Century Studies

"Hunter's work establishes a pattern for interpreting opera that will surely be imitated. If her thoroughly systematic approach to unraveling meaning in opera is followed in similarly uncompromising, contextual analysis, there is much of eighteenth-century opera, of all kinds and locations, that we will yet learn. This is a marvelous beginning."—Dale E. Monoson, Current Musicology