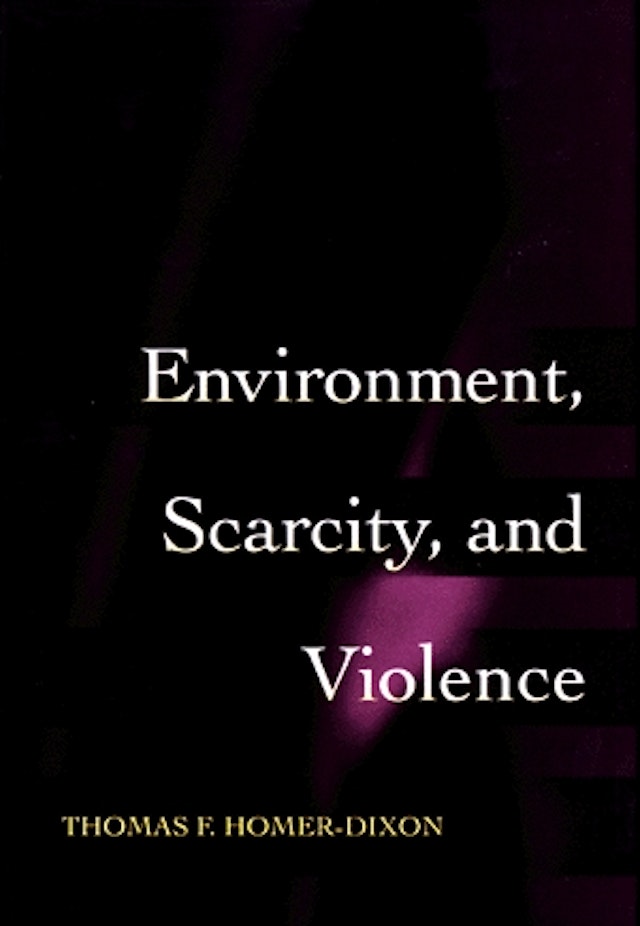 The Earth’s human population is expected to pass eight billion by the year 2025, while rapid growth in the global economy will spur ever increasing demands for natural resources. The world will consequently face growing scarcities of such vital renewable resources as cropland, fresh water, and forests. Thomas Homer-Dixon argues in this sobering book that these environmental scarcities will have profound social consequences — contributing to insurrections, ethnic clashes, urban unrest, and other forms of civil violence, especially in the developing world.

Homer-Dixon synthesizes work from a wide range of international research projects to develop a detailed model of the sources of environmental scarcity. He refers to water shortages in China, population growth in sub-Saharan Africa, and land distribution in Mexico, for example, to show that scarcities stem from the degradation and depletion of renewable resources, the increased demand for these resources, and/or their unequal distribution. He shows that these scarcities can lead to deepened poverty, large-scale migrations, sharpened social cleavages, and weakened institutions. And he describes the kinds of violence that can result from these social effects, arguing that conflicts in Chiapas, Mexico and ongoing turmoil in many African and Asian countries, for instance, are already partly a consequence of scarcity.

Homer-Dixon is careful to point out that the effects of environmental scarcity are indirect and act in combination with other social, political, and economic stresses. He also acknowledges that human ingenuity can reduce the likelihood of conflict, particularly in countries with efficient markets, capable states, and an educated populace. But he argues that the violent consequences of scarcity should not be underestimated — especially when about half the world’s population depends directly on local renewables for their day-to-day well-being. In the next decades, he writes, growing scarcities will affect billions of people with unprecedented severity and at an unparalleled scale and pace.

Clearly written and forcefully argued, this book will become the standard work on the complex relationship between environmental scarcities and human violence.

Thomas F. Homer-Dixon is Associate Professor of Political Science and Director of the Peace and Conflict Studies Program at the University of Toronto. He is the author of Environmental Scarcity and Global Security and the forthcoming book The Ingenuity Gap.

"This is an important book. Homer-Dixon moves the arguments about environmental scarcity and violent conflict forward a big step. I doubt if much will be written about the subjects in the next ten years that does not build on it, follow out some of its leads, or try to refute it."—Robert Jervis, Institute for War and Peace Studies, Columbia University

"Thomas Homer-Dixon has thought more deeply, reasoned more carefully, and written more coherently about the environment/scarcity/violence nexus than anyone else I know of. This is a brilliant book—must reading for anyone concerned about the human condition in the twenty-first century."—John P. Holdren, Center for Science and International Affairs, John F. Kennedy School of Government, Harvard University