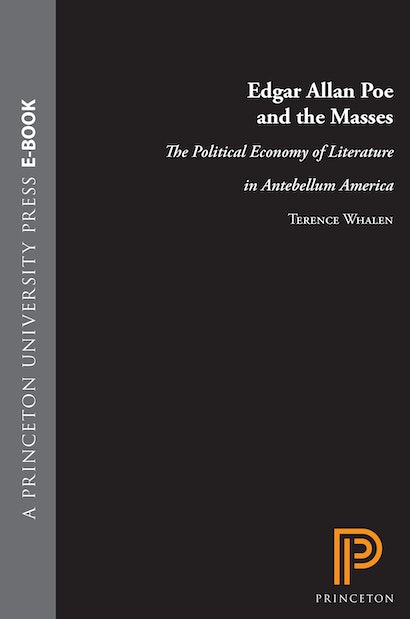 Edgar Allan Poe has long been viewed as an artist who was hopelessly out of step with his time. But as Terence Whalen shows, America’s most celebrated romantic outcast was in many ways the nation’s most representative commercial writer. Whalen explores the antebellum literary environment in which Poe worked, an environment marked by economic conflict, political strife, and widespread foreboding over the rise of a mass audience. The book shows that the publishing industry, far from being a passive backdrop to writing, threatened to dominate all aspects of literary creation. Faced with financial hardship, Poe desperately sought to escape what he called “the magazine prison-house” and “the horrid laws of political economy.” By placing Poe firmly in economic context, Whalen unfolds a new account of the relationship between literature and capitalism in an age of momentous social change.

The book combines pathbreaking historical research with innovative literary theory. It includes the first fully-documented account of Poe’s response to American slavery and the first exposé of his plot to falsify circulation figures. Whalen also provides a new explanation of Poe’s ambivalence toward nationalism and exploration, a detailed inquiry into the conflict between cryptography and common knowledge, and a general theory of Poe’s experiments with new literary forms such as the detective story. Finally, Whalen shows how these experiments are directly linked to the dawn of the information age. This book redefines Poe’s place in American literature and casts new light on the emergence of a national culture before the Civil War.

Terence Whalen is Assistant Professor of English at the University of Illinois at Chicago. His work has appeared in such journals as American Quarterly and Representations.

"An important and carefully researched book on Poe. . . . Whalen is a remarkably well versed Poe scholar. . . . His elegantly and lucidly written book . . . is sure to crucially influence the future shape of Poe studies."—Scott S. Derrick, Journal of Southern History

"The most illuminating full-scale study of Poe to appear in many years, Terence Whalen's Edgar Allan Poe and the Masses reconstructs the economic determinants of the author's career to establish a compelling new understanding of his works and his place in American literature. Often cast as an otherworldly outsider, Poe emerges here as a representative figure, a shrewd magazinist acutely aware of (and responsive to) developments in American mass culture during the antebellum market revolution. Poe regarded the emerging mass audience as a target of exploitation but also a menace to serious art and personal privacy; Whalen resituates standard texts like The Gold Bug to show how economic issues suffused Poe's narratives and how worries about the horrid laws of political economy, dogged even his visionary projects. A work of extraordinary originality and resourcefulness, Edgar Allan Poe and the Masses seems to me an indispensable book destined to set the course for Poe studies in the coming decade."—J. Gerald Kennedy, author of Poe, Death, and the Life of Writing

"Cultural critics have been concerned with the economic conditions of book publishing and journalism, often in quite general terms; and there are scholars who have been interested in Edgar Allan Poe's work, who have gone to the archives, verified texts, established historical contexts. Whalen, however, is the rare case of a critic who has a sharp theoretical mind and has done archival work; he knows his texts. In the course of this book, Whalen has managed to revise many of the common assumptions about Poe's career as a writer. Simply stated, this is a major book."—Lilian Weissberg, University of Pennsylvania