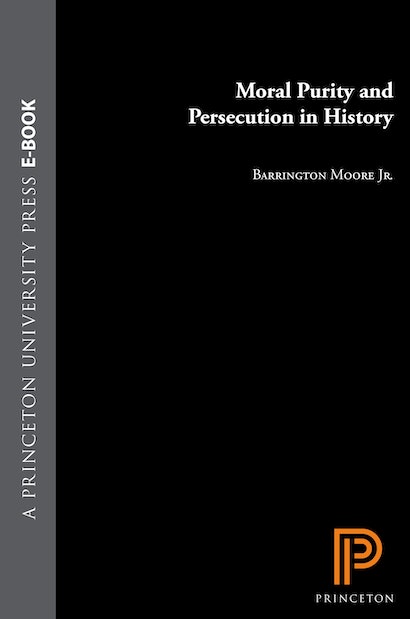 The intellectual scope and courage to contend with the largest puzzles of human existence and organization distinguish great social thinkers. Barrington Moore’s Social Origins of Dictatorship and Democracy was a foundational work of historical sociology that influenced a generation of social scientists and, decades later, continues to be widely read and taught. Here, Moore takes up the same tools of historical comparison to investigate why groups of people kill and torture each other. His answer is arrestingly simple: people persecute those whom they perceive as polluting due to their “impure” religious, political, or economic ideas.

Moore’s search begins with the Old Testament’s restrictions on sexual behavior, idolatry, diet, and handling unclean objects. He argues that religious authorities seeking to distinguish the ancient Hebrews from competing groups invented, along with monotheism, the association of impure things with moral failure and the violation of God’s will. This allowed people to view those holding competing ideas as contaminated and, more important, contaminating. Moore moves next to the French Wars of Religion, in which Protestants and Catholics massacred each other over the control of purity, and the French Revolution, which perfected terror and secularized purity. He then combs the major Asian religions and finds — to his surprise — that violent efforts to eradicate the “impure” were largely absent before substantial Western influence.

Moore’s provocative conclusion is that monotheism — with its monopoly on virtue and failure to provide supernatural scapegoats — is responsible for some of the most virulent forms of intolerance and is a major cause of human nastiness and suffering. Moore does not say that the monotheist tradition was the primary source of Nazism, Stalinism, Maoism, violent Hindu fundamentalism, or ethnic cleansing in Rwanda and the former Yugoslavia, but he does identify it as an indispensable cause because it justified, encouraged, and spread vindictive persecution throughout the world.

Once again, Moore has drawn on his comprehensive understanding of history and talent for speaking directly to readers to address one of the most crucial questions about human past and future. This book is for anyone who has ever heard the word genocide and asked why.

Barrington Moore, Jr. is an internationally known scholar with a passion for understanding the reasons for conflict and oppression in human societies. He has served on the Harvard University faculty for more than 50 years, as a lecturer on sociology and as Senior Research Fellow at the Russian Research Center. He is the author of the landmark Social Origins of Dictatorship and Democracy: Lord and Peasant in the Making of the Modern World and other books.

"With the Iranian Pasdaran, the Afghan Taliban, and the American New Christian Right, Moore's concerns have deep contemporary resonance. He has, however, chosen to reflect on action against alleged impurity by reaching far back into history.... The result is a thought-provoking series of essays."—Charles Tilly, Columbia University

"Barrington Moore delivers a powerful account of how Western civilization—in both its Christian and its secular revolutionary traditions—has nurtured a strong sense of divide between the pure 'we' and the impure and polluting 'enemy'. This, he compellingly argues, explains much of the mass murder so dominant in our history."—Michael Mann, University of California, Los Angeles

"Moore has, over many decades, demonstrated a knack for selecting original topics with timely significance. This book is no exception.... Justly celebrated for his analysis of the social structural determinants of political outcomes, Moore never lost sight of the importance of cultural factors. The constellation of ideas and beliefs that move people to action is an abiding theme in his life's work. Moral Purity reveals the extent to which cultural factors occupy a central place in Moore's approach to the study of popular movements. This is a stimulating, highly original set of essays by a master of comparative historical analysis with an extremely fertile sociological imagination."—Victoria Bonnell, University of California, Berkeley