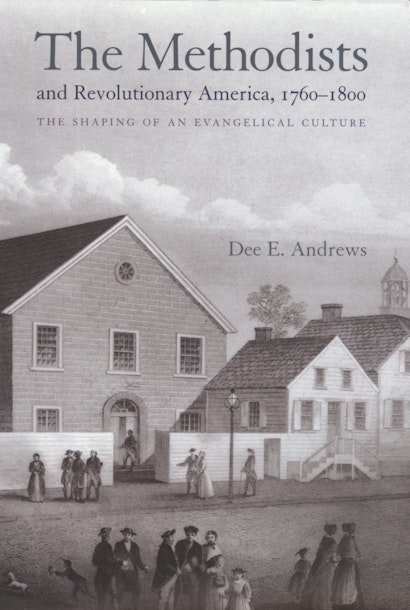 The Methodists and Revolutionary America is the first in-depth narrative of the origins of American Methodism, one of the most significant popular movements in American history. Placing Methodism’s rise in the ideological context of the American Revolution and the complex social setting of the greater Middle Atlantic where it was first introduced, Dee Andrews argues that this new religion provided an alternative to the exclusionary politics of Revolutionary America. With its call to missionary preaching, its enthusiastic revivals, and its prolific religious societies, Methodism competed with republicanism for a place at the center of American culture.


Based on rare archival sources and a wealth of Wesleyan literature, this book examines all aspects of the early movement. From Methodism’s Wesleyan beginnings to the prominence of women in local societies, the construction of African Methodism, the diverse social profile of Methodist men, and contests over the movement’s future, Andrews charts Methodism’s metamorphosis from a British missionary organization to a fully Americanized church. Weaving together narrative and analysis, Andrews explains Methodism’s extraordinary popular appeal in rich and compelling new detail.

"Among the best treatments we have of the intertwined influence of class, political economy, and religious belief in the formative era of American evangelicalism. The Methodists and Revolutionary America is a formidable achievement."—Susan Juster, Journal of American History

"Because Andrews challenges many conventional images of early Methodists and revivalists and because her conclusions are solidly grounded, this book should be required reading for historians of early American religion."—Choice

"At very long last the Methodists of the early United States are receiving the serious historical attention they have always deserved. . . . The Methodists and Revolutionary America is the latest and in some ways the best of . . . recent efforts to take the measure of the movement that in the two generations after the War for Independence transformed the face of American religion. . . . The product of nearly two decades of intensive research."—Mark A. Noll, Reviews in American History

"A superb account of early American Methodism. . . . What comes across most strongly from Andrew's prodigious research are the organizational talents of the Methodist leaders and the extraordinary devotion of the rank and file. . . . Throughout her fine study she instead focuses on the astonishing varietym of figures and groups who found a home in Methodism. Her story is laced with illustrative biographical vignettes of individual travails and triumphs, as well as studded with a wealth of statistics that document the growth and demographic breakdown of the denomination.""—Ruth H. Bloch, Books and Culture

"A thorough treatment of Methodism in the revolutionary age. Historians of the cultural evolution of the early republic as well as students of Methodist development will benefit greatly from this volume."—William Sutton, Journal of the Early Republic

"There is no question that Andrews has produced a brilliantly researched and important book. . . . [It is] the most comprehensive and well-informed account ever written of American Methodism's first forty years."—David Hempton, Times Literary Supplement

"Dee Andrews effectively demonstrates . . . [that] the Methodists established an efficiently organized, bishop-dominated, governing structure. . . . More amazingly, while maintaining their appeal to the white, middle-class male, they were able to reach out to involve women, the urban poor, and blacks, both free and slave, in impressive numbers."—Paul D. Haynie, The Historian

"Methodists and Revolutionary America emphasizes that the earliest Methodists did not live in North America so much as they were a brooding presence within that society and culture, as—in very different ways they had been in the British Isles."—Robert Calhoon, The Journal of Religion

"Methodists have been among the most important artisans of American culture, but as a people they have largely been invisible to historians. . . . Andrews is consistently careful to tease out the contradictions that make it difficult to reduce the movement of a simple formula, such as class consciousness or gendered enlightenment. . . . From the very beginning, the primary goal of this evangelizing church was not to change politics or social structure, but to reach people in every condition 'by popularizing the confessional religious life.' Through Dee Andrews . . . that life becomes an essential part of every American history."—Donald G. Matthews, William and Mary Quarterly

"Although the future of Methodist missionary success after about 1800 lay in the South and the West, its earliest American hearth lay in the coastal mid-Atlantic, in cities like New York, Philadelphia, and Baltimore and their rural hinterlands. That is where Andrews trains her focus, as well as her considerable powers for writing well-crafted history based on careful and wide-ranging research. To date, there is no fuller or more evenhanded guide to the origins of American Methodism in the mid-Atlantic. . . . Nor is there a more sensitive recovery of the distinctive quality of early Methodist piety and sensibility and the singular ritual processes by which these pilgrims made their progress from conviction to conversion."—Christine Leigh Heyrman, Church History

"Dee Andrews provides the most comprehensive and rounded history in print of the rise of American Methodism. A signal and enduring achievement."—Patricia U. Bonomi, author of Under the Cope of Heaven: Religion, Society, and Politics in Colonial America

"The Methodists and Revolutionary America is superbly researched, solidly written, and imaginatively conceived—a superbly synoptic account of one of the defining groups in American religious history."—Jon Butler, Yale University