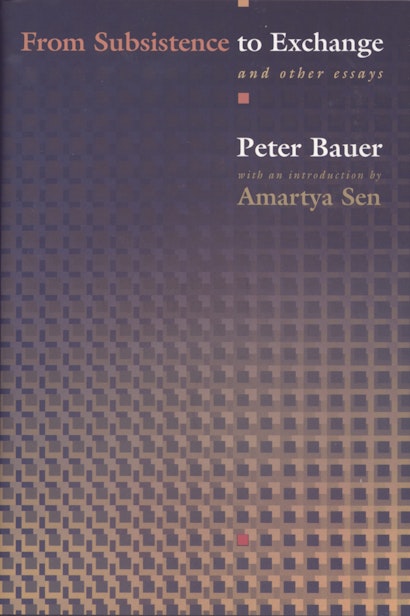 Peter Bauer, a pioneer of development economics, is an incisive thinker whose work continues to influence fields from political science to history to anthropology. As Nobel Laureate Amartya Sen writes in the introduction to this book, “the originality, force, and extensive bearing of his writings have been quite astonishing.” This collection of Bauer’s essays reveals the full power and range of his thought as well as the central concern that underlies so much of his diverse work: the impact of people’s conduct, their cultural institutions, and the policies of their governments on economic progress.


The papers here cover pressing and controversial issues, including the process that transforms a subsistence economy into an exchange economy, the reputed correlation between poverty and population density, the alleged responsibility of the West for Third World poverty, the often counterproductive results of foreign aid, and the effects of egalitarian policies on individual freedoms. Bauer addresses these and other matters with clarity, verve, and wit, combining his deep understanding of economic theory and methodology with keen insights into human nature. The book is a penetrating account of how to develop a prosperous economy alongside a free and fair society and a stimulating introduction to the work of a man who has done so much to shape our modern understanding of developing economies and of the relationship of economics to the other social sciences.


“This selection of essays will give readers a wonderful opportunity to learn about the rich world of cognizance and analysis erected by one of the great architects of political economy. I feel privileged to be able to offer this letter of invitation.” — From the introduction by Amartya Sen, Nobel Laureate in economics

"For half a century, Peter Bauer has been a towering iconoclast among development economists, consistently unafraid to demolish conventional wisdom with penetrating insight. . . . [T]his excellent collection of essays. . . [is] a wonderful introduction to a mind that takes no prisoners."—The Economist

"Whether or not the reader agrees with [Bauer's] positions, they are carefully and thoughtfully argued."—Foreign Affairs

"[Bauer] has also been interested in explaining the Zeitgeist which produced-and in many cases continues to project-the influential ideas and policies which are in such total disregard of readily observable reality. It is these reflections, contained in a number of essays in this book, which are likely to resonate with the general reader observing the contemporary world scene."—Deepak Lal, Times Literary Supplement

"The essays here contain many of the key elements of Professor Bauer's thought, which I regard as an oasis of common sense in a desert of muddled thinking.... He goes after weak and self-serving explanations with commendable vigor."—Richard Epstein, University of Chicago