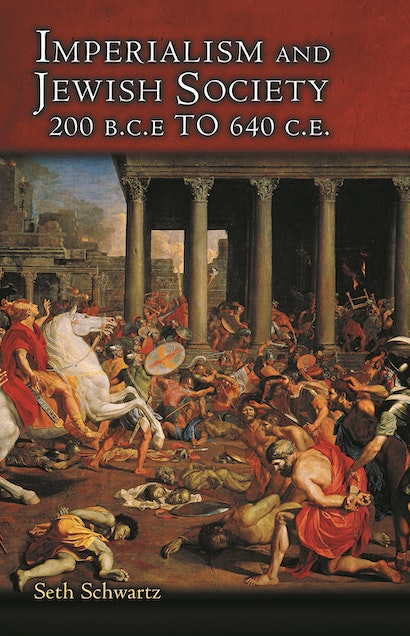 This provocative new history of Palestinian Jewish society in antiquity marks the first comprehensive effort to gauge the effects of imperial domination on this people. Probing more than eight centuries of Persian, Greek, and Roman rule, Seth Schwartz reaches some startling conclusions — foremost among them that the Christianization of the Roman Empire generated the most fundamental features of medieval and modern Jewish life.


Schwartz begins by arguing that the distinctiveness of Judaism in the Persian, Hellenistic, and early Roman periods was the product of generally prevailing imperial tolerance. From around 70 C.E. to the mid-fourth century, with failed revolts and the alluring cultural norms of the High Roman Empire, Judaism all but disintegrated. However, late in the Roman Empire, the Christianized state played a decisive role in ”re-Judaizing” the Jews. The state gradually excluded them from society while supporting their leaders and recognizing their local communities. It was thus in Late Antiquity that the synagogue-centered community became prevalent among the Jews, that there re-emerged a distinctively Jewish art and literature — laying the foundations for Judaism as we know it today.


Through masterful scholarship set in rich detail, this book challenges traditional views rooted in romantic notions about Jewish fortitude. Integrating material relics and literature while setting the Jews in their eastern Mediterranean context, it addresses the complex and varied consequences of imperialism on this vast period of Jewish history more ambitiously than ever before. Imperialism in Jewish Society will be widely read and much debated.

Seth Schwartz is the Gerson D. Cohen Professor of History at the Jewish Theological Seminary in New York. He is the author of Josephus and Judaean Politics and coauthor, with Roger Bagnall, Alan Cameron, and Klaas Worp, of Consuls of the Later Roman Empire.

"Schwartz has presented nothing less than a learned and bold bombshell with this important, groundbreaking book. His thesis is that to make sense of the remains of ancient Judaism, one must consider the effects of shifting types of imperial domination and that there is a direct connection between the rise of the synagogue and the religious ideology that justified its construction and the rise of Christianity. This is the most original and the most provocative book on this period that has appeared in many years. It will, and deservedly, be the subject of debate for a long time to come."—Louis H. Feldman, The Forward

"Important. . . . Schwartz challenges many long-held ideas about Jews in antiquity. . . . This work is recommended as fascinating reading for anyone interested in the history of the Jews and Judaism."—James E. Seaver, History: Reviews of New Books

"Schwartz is a leading expert on the Jews in the Roman Empire. Using scholarly publications, he has produced a new synthesis that will provoke much debate among scholars. . . . [His] carefully argued positions must be taken seriously."—Choice

"A bold feat of reinterpretation that is certain to stir up controversy in scholarly circles."—Stuart Schoffman, Jerusalem Report

"This is a brilliant and provocative book, which will undoubtedly stimulate much debate among historians of Judaism and of the ancient world. But it deserves, as well, a wide audience among all those interested in the impact of imperial power on regional cultures."—J. B. Rives, International History Review

"An invaluable piece of current scholarship on ancient Judaism. . . . This book represents a fresh and unique look at a familiar subject, and it should be required reading for any serious scholar of ancient Judaism, early Christianity, or ancient Mediterranean religions."—Daniel Bernard, Journal of Religion and Culture

"Seth Schwartz's work is a much more complex assessment of ancient Jewish society and culture than that which the one-sided traditional accounts present: it is the first consistent and comprehensive attempt to view Jewish society of Hellenistic and Roman-Byzantine times in the context of the broader socio-political, economic, and religious developments of the ancient eastern Mediterranean world. This allows him to interpret the sparse evidence from Roman Palestine in a much more convincing way than has formerly been done."—Catherine Hezser, Trinity College, Dublin

"Imperialism and Jewish Society comprises a highly ambitious discussion of a very wide sweep of Jewish history, with novel insights into major issues of the general interpretation of that history and into numerous minor matters of a widely disparate nature. There are interesting observations on every page. Nothing quite like it has ever been attempted before."—Martin Goodman, Oxford University