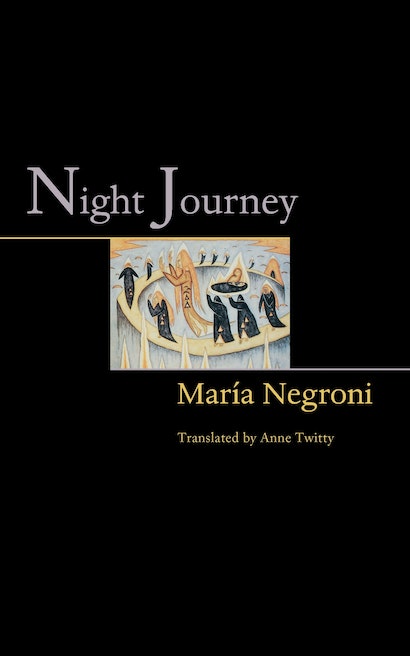 One of South America’s most celebrated contemporary poets takes us on a fantastic voyage to mysterious lands and seas, into the psyche, and to the heart of the poem itself. Night Journey is the English-language debut of the work that won María Negroni an Argentine National Book Award. It is a book of dreams — dreams she renders with surreal beauty that recalls the work of her compatriot Alejandra Pizarnik, with the penetrating subtlety of Borges and Calvino.


In sixty-two tightly woven prose poems, Negroni deftly infuses haunting imagery with an ironic, personal spirituality. Effortlessly she navigates the nameless subject to the slopes of the Himalayas, to a bar in Buenos Aires, through war, from icy Scandinavian landscapes to the tropics, across seas, toward a cemetery in the wake of Napoleon’s hearse, by train, by taxis headed in unrequested directions, past mirrors and birds, between life and death.

Night Journey reflects a mastery of a traditional form while brilliantly expressing a modern condition: the multicultural, multifaceted individual, ever in motion. Displacement abounds: a “medieval tabard” where a pelvis should be, a “lipless grin,” a “beach severed from the ocean.” In one poem “nomadic cities” whisk past. In another, smiling cockroaches loom in a visiting mother’s eyes.


Anne Twitty, whose elegant translations are accompanied by the Spanish originals, remarks in her preface that the book’s “indomitable literary intelligence” subdues an unspoken terror — helplessness. Yet, as observed by the angel Gabriel, the consoling voice of wisdom, only by accepting the journey for what it is can one discover its “hidden splendor,” the “invisible center of the poem.” As readers of this magnificent work will discover, this is a journey that, because its every fleeting image conjures a thousand words of fertile silence, can be savored again and again.

María Negroni was born in Argentina in 1951. Recipient of the 2000-2001 Octavio Paz Fellowship for Poetry, she has published a novel, two books of essays, and six books of poetry in her native Spanish, one of which has previously appeared in bilingual editions in the United States. Night Journey is the English-language debut of El viaje de la noche (1994), which received an Argentine National Book Award in 1997. Her translations from French and English have been widely published. She teaches Latin American Poetry at Sarah Lawrence College. Anne Twitty has translated books and numerous shorter works into English by Negroni, the Cuban poet Magali Alabau, and others. She was formerly editor of the Epicycle section of Parabola, in which she published essays on myth, creation, and memory.

"One of my own newest designated dreamers is the Argentine poet Maria Negroni, whose debut volume in English, Night Journey, takes the wordless logic of dreams and turns it into her own precise, oracular music. This book is pervaded by the spooky sense of a woman traveling in many directions, most of them unrequested, jouneying through shadows and mirrors, navigating the mysteries by shuttling between life and death."—Edward Hirsch, The Washington Post

"Night Journey is a collection of prose poems, each recounting a dream sequence. . . . Many of Negroni's dreams combine elements of surrealism and lyric narrative, which creates a matrix of symbols both archetypal and idiosyncratic through which the poet confronts generally nameless, yet recognizable, fears. . . . It reminds me that when we read wonderful poetry it's as if we are privy to a delicious rumor, and we must pass it on."—Priscila Uppal, Toronto Globe and Mail

"Arising from this intricate collection is a message. The poet comes to learn that her quest is both multiple and unified; for her, the act of writing cannot be separated from loving, from remembering, from voyagin out."—John Taylor, The Antioch Review

"A mysterious configuration of presence and absence, Night Journey is an intricate symbolic mapping of identity. María Negroni has written a book in which each poem is an open window allowing us to observe the dangerous clash of unreality and reality. For as she writes: 'I began to name things, that is, to conceal them.' And so the reader enters the fascinating universe of a woman traveling amid and beyond fear, mirrors, and shadows. Night Journey: a book where existence is a daring language of dreams."—Nicole Brossard, author of Mauve Desert

"Calvino's prose (as in Invisible Cities) is the only predecessor I can cite for María Negroni's sophisticated texts, and Anne Twitty's remarkable translations are quite as striking and idiomatic as William Weaver's celebrated versions of the Italian master. These prose poems have all the glamour of narrative fables and all the lyric density of odes. One reads through Night Journey with the rare certainty that this is literature, a sequence of passionate, sorrowing renunciations; and the singular elegance of the utterance, in English as in Spanish, brings these illuminations precisely to the level where Rimbaud had left that word."—Richard Howard

"In El viaje de la noche, a sense of the uncanny is presented with a precise eloquence that preserves its hermetic nature. . . . Here we have an exceptional book, one that transforms its dark, serene, and fearsome music into a desire to read and reread."—Jorge Monteleone, Página/12, Buenos Aires