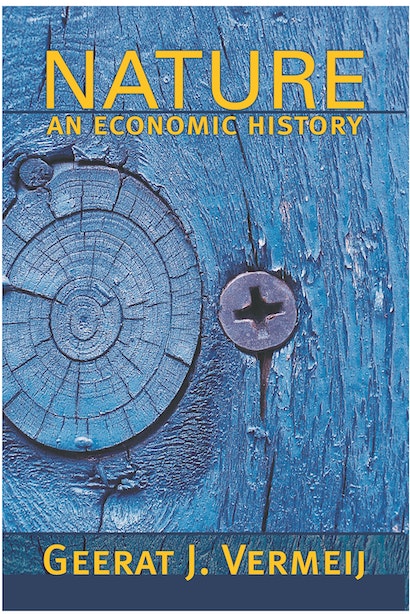 From humans to hermit crabs to deep water plankton, all living things compete for locally limiting resources. This universal truth unites three bodies of thought — economics, evolution, and history — that have developed largely in mutual isolation. Here, Geerat Vermeij undertakes a groundbreaking and provocative exploration of the facts and theories of biology, economics, and geology to show how processes common to all economic systems — competition, cooperation, adaptation, and feedback — govern evolution as surely as they do the human economy, and how historical patterns in both human and nonhuman evolution follow from this principle.


Using a wealth of examples of evolutionary innovations, Vermeij argues that evolution and economics are one. Powerful consumers and producers exercise disproportionate controls on the characteristics, activities, and distribution of all life forms. Competition-driven demand by consumers, when coupled with supply-side conditions permitting economic growth, leads to adaptation and escalation among organisms. Although disruptions in production halt or reverse these processes temporarily, they amplify escalation in the long run to produce trends in all economic systems toward greater power, higher production rates, and a wider reach for economic systems and their strongest members.


Despite our unprecedented power to shape our surroundings, we humans are subject to all the economic principles and historical trends that emerged at life’s origin more than 3 billion years ago. Engagingly written, brilliantly argued, and sweeping in scope, Nature: An Economic History shows that the human institutions most likely to preserve opportunity and adaptability are, after all, built like successful living things.

Geerat J. Vermeij is Distinguished Professor of Geology at the University of California, Davis. As an evolutionary biologist and paleontologist, he studies shells and the fossil and living animals responsible for building them. His books include Evolution and Escalation: An Ecological History of Life, A Natural History of Shells (both Princeton), and Privileged Hands. He received a MacArthur Fellowship in 1992.

"Novel and intriguing. . . . [Nature: An Economic History] offers a distinctive point of view and an insightful synthesis that promises to provide the basis of much future work."—Douglas H. Erwin, Science

"Vermeij is one of the master naturalists of our time, and his command of the subtleties of animal interactions is exceptional. I think anyone can learn a great deal from this book."—Richard K. Bambach, American Scientist

"Vermeij, a well-known paleontologist and observer of nature writ large, has written a marvelously interdisciplinary work that makes an important contribtuion to the literature of complex adaptive systems. . . . [R]eaders who are interested in multidisciplinary issues will benefit from Vermeij's impressive breadth of knowledge. It is a pleasure to follow his articulate and synthesizing trek across the boundaries of conventional academic subjects."—Eric J. Chaisson, Quarterly Review of Biology

"There are clear analogies between economics and biological evolution, but the thesis of this articulate essay is that both fields can and should be described in exactly the same terms in a single theoretical framework. . . . In successive chapters describing consumption of resources, competition, organization, environment and geography, evolutionary biologist Vermeij illustrates, with copious examples from paleontology, ecology, and economic history, the overarching common description of competition for locally scarce resources and differential success based on variation, leading to evolving adaptations and descent with modification.""—Choice

"Geerat Vermeij . . . has taken economic reasoning even further, arguing in Nature: An Economic History that economists and natural scientists are asking the same kinds of questions in their seemingly disparate fields. . . . Vermeij makes a convincing case that thinking about large swaths of the natural world in terms of competition for scarce resources is both accurate and useful."—Andrew P. Morriss, Books & Culture

"Vermeij presents a natural history written in what he considers economic terms and argues that biologists should know more about economics. While the exchanges between economics and biology can sometimes be hazardous and misleading, quite a bit could be learned by economists from reading this book."—Joel Mokyr, Journal of Economic Literature

"A hugely impressive, tremendously rich book that I read with admiration and fascination. One of the most interesting intellectuals of our age, Geerat Vermeij writes with verve and grace, and he is willing, indeed eager, to take risks in order to look at the (very) big picture. His book is chock-full of knowledge and wisdom as well as keen and succinct original insights. It will be widely read and admired."—Joel Mokyr, Northwestern University, author of The Gifts of Athena: Historical Origins of the Knowledge Economy

"Both ecological systems and economic systems are complex and adaptive, with self-organization and evolutionary change coupled in each; but the analogy is deeper, extending to the fundamental nature of how these systems are organized. This is the basic theme of Vermeij's masterful and scholarly book. From a biological point of view, Nature is a remarkable synthesis. Few people could have ventured out of their disciplines with such insights."—Simon A. Levin, Princeton University

"Fascinating. Above and beyond enriching our understanding of evolution per se, this engagingly written book, which I am very glad to have read, helps us think about where we as a species may be headed in the future. What more can you ask for?"—Kenneth Pomeranz, University of California, Irvine, author of The Great Divergence

"An important and well-written contribution to evolutionary biology. Analogies between ecology/evolution and economics were 'subliminally' apparent to Darwin, many have developed particular analogies quite explicitly, and economists have looked to evolutionary biology to explain why human beings engage in irrational forms of altruism. Vermeij develops these analogies in a far more synoptic and comprehensive manner than anyone has before."—Egbert G. Leigh, Smithsonian Tropical Research Institute, author of Tropical Forest Ecology