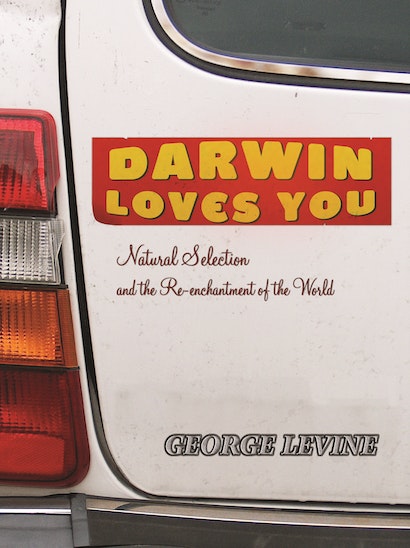 Jesus and Darwin do battle on car bumpers across America. Medallions of fish symbolizing Jesus are answered by ones of amphibians stamped “Darwin,” and stickers proclaiming “Jesus Loves You” are countered by “Darwin Loves You.” The bumper sticker debate might be trivial and the pronouncement that “Darwin Loves You” may seem merely ironic, but George Levine insists that the message contains an unintended truth. In fact, he argues, we can read it straight. Darwin, Levine shows, saw a world from which his theory had banished transcendence as still lovable and enchanted, and we can see it like that too — if we look at his writings and life in a new way.


Although Darwin could find sublimity even in ants or worms, the word “Darwinian” has largely been taken to signify a disenchanted world driven by chance and heartless competition. Countering the pervasive view that the facts of Darwin’s world must lead to a disenchanting vision of it, Levine shows that Darwin’s ideas and the language of his books offer an alternative form of enchantment, a world rich with meaning and value, and more wonderful and beautiful than ever before. Without minimizing or sentimentalizing the harsh qualities of life governed by natural selection, and without deifying Darwin, Levine makes a moving case for an enchanted secularism — a commitment to the value of the natural world and the human striving to understand it.

George Levine is Professor Emeritus of English at Rutgers University. His books include Darwin and the Novelists; Dying to Know: Narrative and Scientific Epistemology in Victorian England; The Realistic Imagination: English Fiction from Frankenstein to Lady Chatterley; The Boundaries of Fiction; and a memoir about birdwatching, Lifebirds.

"Darwin Loves You is the most interesting book I have read this year. It is wise, brave, and beautifully written. Levine's reflections on the important issue of Darwinism as an ideology are bound to engage readers. He shows that Darwin's science is not dehumanising or amoral and that it's possible to be a Darwinist and still believe that the world has meaning."—Janet Browne, author of Charles Darwin: The Power of Place

"George Levine has thought deeply about Darwinism, its cultural history, and its implications for moral and spiritual values. Darwin Loves You should be read by everyone who thinks that their values are threatened by evolutionary theory."—David Sloan Wilson, author of Darwin's Cathedral: Evolution, Religion, and the Nature of Society and How to be a Good Evolutionist

"Darwin Loves You is a very important work that deserves to be read by many people well outside the narrow circle of Darwin specialists. First, it is a brilliant account of how a science is taken up and used for diverse cultural ends, far beyond the intention of the author and the content of the text. Second, it is crucially relevant to the present day with the horrifying rise of fundamentalist religion in America and abroad. It shows how science gets misused and misunderstood in dangerous ways by fanatics. Third, and most important of all, it introduces us to a man who is deeply in love with his subject, wanting to engage the reader. One learns here truly why scholarship is such a joyful activity."—Michael Ruse, author of The Evolution-Creation Struggle

"This is a rich and multilayered argument for a wider appreciation of a 'kinder, gentler' Darwin. It examines many of the ways in which Darwin's writings have been appropriated by later social Darwinist and eugenicist thought. Levine makes a cogent defence of the practice of close reading both Darwin and his many commentators. The result is a subtle but powerful argument about the way in which distinctive strands of Darwin's intellectual and personal identity—as romantic materialist and emotional subject—need to be appreciated as a possible resource of re-enchantment, overturning pessimistic, rationalistic, and technological disenchantment."—David Amigoni, Keele University, coeditor of Charles Darwin's "Origin of Species": New Interdisciplinary Essays

"Passionate, erudite, and polemical, Darwin Loves You draws its arguments from a heady array of writers and philosophers. This is a book to think with."—Rebecca Stott, Anglia Ruskin University, Cambridge, author of Darwin and the Barnacle