From the author of the definitive biography of Fyodor Dostoevsky, never-before-published lectures that provide an accessible introduction to the Russian writer's major works 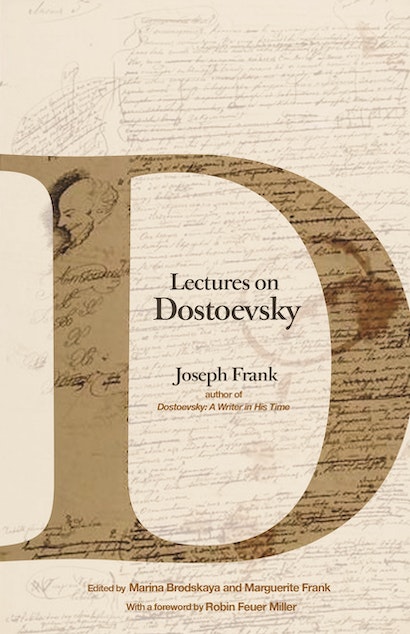 Joseph Frank (1918–2013) was perhaps the most important Dostoevsky biographer, scholar, and critic of his time. His never-before-published Stanford lectures on the Russian novelist’s major works provide an unparalleled and accessible introduction to some of literature’s greatest masterpieces. Presented here for the first time, these illuminating lectures begin with an introduction to Dostoevsky’s life and literary influences and go on to explore the breadth of his career—from Poor Folk, The Double, and The House of the Dead to Notes from Underground, Crime and Punishment, The Idiot, and The Brothers Karamazov. Written in a conversational style that combines literary analysis and cultural history, Lectures on Dostoevsky places the novels and their key characters and scenes in a rich context. Bringing Joseph Frank’s unmatched knowledge and understanding of Dostoevsky’s life and writings to a new generation of readers, this remarkable book will appeal to anyone seeking to understand Dostoevsky and his times.

Joseph Frank was professor emeritus of Slavic and comparative literature at Stanford and Princeton. The five volumes of his Dostoevsky biography won a National Book Critics Circle Award, a Los Angeles Times Book Prize, two James Russell Lowell Prizes, and two Christian Gauss Awards, and have been translated into numerous languages. Marina Brodskaya is a translator who worked with Joseph Frank while teaching at Stanford. Her translations include Five Plays by Chekhov. Marguerite Frank, a published mathematician who holds a PhD from Harvard, was married to Joseph Frank from 1953 until his death. Robin Feuer Miller is the Edytha Macy Gross Professor of Humanities and professor of Russian and comparative literature at Brandeis University.

"In chapters on Poor Folk, The Double, The House of the Dead, Notes from Underground, Crime and Punishment, The Idiot, and The Brothers Karamazov, Frank distills his multivolume biography’s provocative and superbly argued readings. . . . The best approach, in Frank’s view, is first to locate Dostoevsky’s fiction and ideas within his immediate concerns, and only then proceed, from the ground up rather than from generalities down, to consider their broader implications. These lectures do that especially well."—Gary Saul Morson, New York Review of Books

"These posthumously published Lectures on Dostoevsky are a new distillation of Joseph Frank's lifetime of work devoted to the Russian writer, and in a new form. The lectures are almost informal talks, in which we hear the living voice and passionate involvement of the man as he speaks both about and with Dostoevsky."—Richard Pevear, prize-winning translator, with Larissa Volokhonsky, of Crime and Punishment

"Remarkably informative and clear, this book presents the results of Joseph Frank's decades-long research on Dostoevsky's writings in a condensed and accessible form. Even complex philosophical issues are addressed in a manner that is lucid but not oversimplified."—Barry Scherr, Dartmouth College

"Lucid and closely argued, Joseph Frank’s lectures, with their erudite exposition of the intellectual and cultural background to Dostoevsky’s great novels, are a masterclass in literary interpretation. A timely reminder of Frank’s unparalleled contribution to Dostoevsky studies, and an excellent companion to his seminal biography, these lectures are essential reading for all Dostoevsky scholars and students."—Sarah Young, University College London

"Joseph Frank’s five-volume critical biography of Dostoevsky is the best such study in any language. The present book, Lectures on Dostoevsky, captures for those who did not know Frank, the teacher and interlocutor: immensely learned, passionate about literature, witty when appropriate, unfailingly direct, and unpretentious. With incisive critical comments, elegant analyses, and deft contextualizations, this work provides not only a superb introduction to Dostoevsky’s genius, but also a distillation of what made Frank one of his century’s most accomplished scholar-critics."—William Mills Todd III, Harvard University