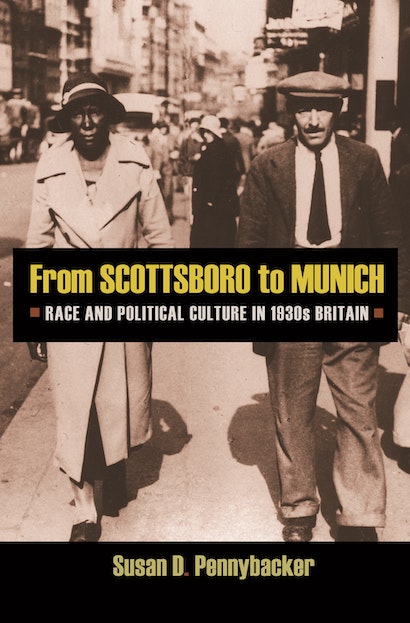 Presenting a portrait of engaged, activist lives in the 1930s, From Scottsboro to Munich follows a global network of individuals and organizations that posed challenges to the racism and colonialism of the era. Susan Pennybacker positions race at the center of the British, imperial, and transatlantic political culture of the 1930s — from Jim Crow, to imperial London, to the events leading to the Munich Crisis — offering a provocative new understanding of the conflicts, politics, and solidarities of the years leading to World War II.


Pennybacker examines the British Scottsboro defense campaign, inaugurated after nine young African Americans were unjustly charged with raping two white women in Alabama in 1931. She explores the visit to Britain of Ada Wright, the mother of two of the defendants. Pennybacker also considers British responses to the Meerut Conspiracy Trial in India, the role that antislavery and refugee politics played in attempts to appease Hitler at Munich, and the work of key figures like Trinidadian George Padmore in opposing Jim Crow and anti-Semitism. Pennybacker uses a wide variety of archival materials drawn from Russian Comintern, Dutch, French, British, and American collections. Literary and biographical sources are complemented by rich photographic images.

From Scottsboro to Munich sheds new light on the racial debates of the 1930s, the lives and achievements of committed activists and their supporters, and the political challenges that arose in the postwar years.

Susan D. Pennybacker is the Borden W. Painter, Jr., Professor of European History at Trinity College in Hartford, Connecticut. She is the author of A Vision for London, 1889-1914.

"Pennybacker's meticulous work examines the confluence of antislavery, anticolonial, and antifascist activities in 1930s Britain. The British, appalled by the oppression of African Americans in the Jim Crow South, identified brutality against nonwhites as a peculiarly American sort of repression."—Choice

"[T]his is an indispensable book for anybody seeking a deeper understanding of the racial politics of 1930s Britain, and their place within broader global historical and geographical networks of advocacy and engagement."—Daniel Wittall, Basa

"From Scottsboro to Munich is strongly recommended for upper-level undergraduate and graduate courses in 20th-century history and politics."—Charles H. Ford, Journal of African American History

"This is an intricate and important history that no review can recount in all its complexity. It suggests not only the value of taking historical writing beyond the confines of the nation but also some of the narrative trials that await both writers and readers of this new transnational history."—Andrew Zimmerman, Journal of Southern History

"The book adds much detail and nuance to the already well-known tragedy of the divided European left in the interwar years. . . . The reader finishes this complex and depressing tale persuaded that, as the author argues, racial and imperial politics prove essential in understanding the 1930s."—Laura Tabili, Journal of Modern History

"From Scottsboro to Munich draws on a wide range of archival sources, including much Comintern and Profintern material that has recently become available from Moscow. It also shows a particular and welcome sensitivity to mixed media of expressive culture. The framing of its disparate and, again, contradictory subject is generally very sharp."—James Smethurst, African American Review

"From Scottsboro to Munich is an important intervention in the history of the 1930s, not only the history of Britain but of the West and the international Left. The book brings together people and campaigns that have been written about separately but never before treated as a whole."—Jeffrey Cox, University of Iowa