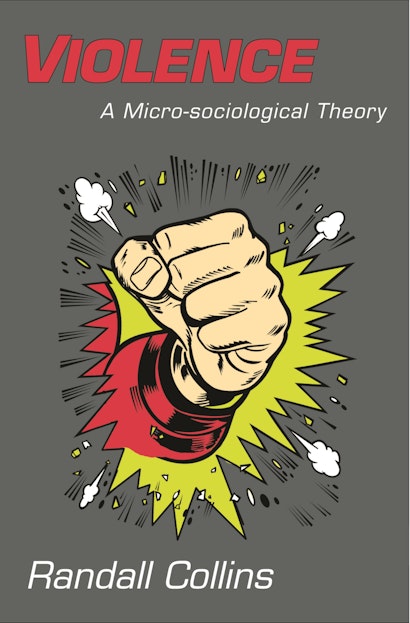 In the popular misconception fostered by blockbuster action movies and best-selling thrillers — not to mention conventional explanations by social scientists — violence is easy under certain conditions, like poverty, racial or ideological hatreds, or family pathologies. Randall Collins challenges this view in Violence, arguing that violent confrontation goes against human physiological hardwiring. It is the exception, not the rule — regardless of the underlying conditions or motivations.


Collins gives a comprehensive explanation of violence and its dynamics, drawing upon video footage, cutting-edge forensics, and ethnography to examine violent situations up close as they actually happen — and his conclusions will surprise you. Violence comes neither easily nor automatically. Antagonists are by nature tense and fearful, and their confrontational anxieties put up a powerful emotional barrier against violence. Collins guides readers into the very real and disturbing worlds of human discord — from domestic abuse and schoolyard bullying to muggings, violent sports, and armed conflicts. He reveals how the fog of war pervades all violent encounters, limiting people mostly to bluster and bluff, and making violence, when it does occur, largely incompetent, often injuring someone other than its intended target. Collins shows how violence can be triggered only when pathways around this emotional barrier are presented. He explains why violence typically comes in the form of atrocities against the weak, ritualized exhibitions before audiences, or clandestine acts of terrorism and murder — and why a small number of individuals are competent at violence.

Violence overturns standard views about the root causes of violence and offers solutions for confronting it in the future.

Randall Collins is the Dorothy Swaine Thomas Professor of Sociology and a member of the Department of Criminology at the University of Pennsylvania. His books include Interaction Ritual Chains (Princeton) and The Sociology of Philosophies: A Global Theory of Intellectual Change.

"Collins's Violence is a sourcebook for the oft-ignored and usually unseen obvious: We humans are bad at violence, even if civilization makes us a bit better at it."—David D. Laitin, Science

"Violence is a rare academic work, with both a convincing reappraisal of its scholarly terrain, and enough accessibility and useful advice to attract laymen. The writing is clear and direct—sometimes with a welcome touch of the colloquial—and well illustrated with photographs and charts."—Graeme Wood, New York Sun

"Offering a wealth of observations...Randall Collins's overall theory is neat: violence is not easy, hence relatively rare. It is a compelling argument."—Jane Kilby, Times Higher Education

"Insofar as his analysis has sought to highlight its micro-situational aspects, he must be applauded. In the future, only interdisciplinary research will be able to approach this topic with the same vigor, and coherence as Collins has provided us in this book."—Paul Armstrong, Canadian Journal of Sociology

"The book is a superb commentary on how the emotional energy created by the situation of forward panic produces violence. . . . Collin's exhaustive treatment of the forward panic is a major contribution to the literature and the term is certain to become a standard part of our vocabulary on violence."—John M. Hagedorn, Anthropos

"Professor Collins has initiated a much needed discussion of violence, unencumbered by myth and make-believe. . . . After reading this excellent and highly readable volume, there are few myths left remain standing!"—P. A. J. Waddington, Policing

"[T]he book is a notable attempt to develop a general sociological theory of interpersonal violence, and anyone interested in violence and peace can learn a great deal from it."—Kristian Skrede Gleditsch, Journal of Peace Research

"[A] deeply learned, thoughtful, and erudite book. . . . [T]he complexity of thought and the clarity of exposition of this first volume leave the reader both fulfilled and eager. Like the greatest of classical sociological thinkers, Collins is both pointillist and abstract expressionist, synthesizing micro and macro, and always asserting the power of the social."—Michael Kimmel, American Journal of Sociology

"Violence overturns standard views about the root causes of violence and offers solutions for confronting it in the future."—World Book Industry

"Covering infinitely recurrent strips of social action running from blustering confrontation to intimate physical attack, Violence is peppered with breakthrough insights, demonstrating the power of systematic theory and even concluding with that rarest of sociological contributions, a short list of eminently practical suggestions. The concept of 'forward panic' alone makes the book indispensable. This book is a milestone contribution to criminology, to micro-sociology, to the sociology of emotions, and to a field that knows no academic boundaries: the history of efforts to control violence. Randy Collins has developed a framework that should guide a generation of research."—Jack Katz, University of California, Los Angeles

"I have no doubt that this book will be hailed as one of the most important works on violence ever written. After reading it, it is difficult any longer to imagine that all that is needed for violence to occur is a motive to engage in violence. Collins argues persuasively that the situation must also be right if violence is actually to occur."—Donald Black, author of The Social Structure of Right and Wrong

"A masterful study of the microdynamics of violence. This book will undoubtedly provoke excitement and controversy among a wide group of readers, including educated nonspecialists as well as academics, journalists, law-enforcement professionals, and policymakers. Truly an original book."—Eiko Ikegami, author of The Taming of the Samurai