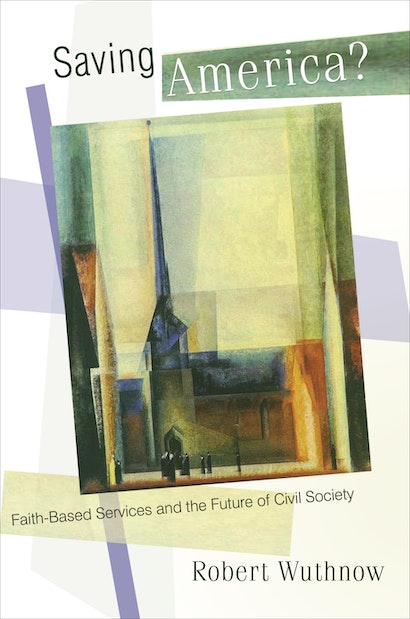 On January 29, 2001, President George W. Bush signed an executive order creating the White House Office of Faith-Based and Community Initiatives. This action marked a key step toward institutionalizing an idea that emerged in the mid-1990s under the Clinton administration — the transfer of some social programs from government control to religious organizations. However, despite an increasingly vocal, ideologically charged national debate — a debate centered on such questions as: What are these organizations doing? How well are they doing it? Should they be supported with tax dollars? — solid answers have been few.

In Saving America? Robert Wuthnow provides a wealth of up-to-date information whose absence, until now, has hindered the pursuit of answers. Assembling and analyzing new evidence from research he and others have conducted, he reveals what social support faith-based agencies are capable of providing. Among the many questions he addresses: Are congregations effective vehicles for providing broad-based social programs, or are they best at supporting their own members? How many local congregations have formal programs to assist needy families? How much money do such programs represent? How many specialized faith-based service agencies are there, and which are most effective? Are religious organizations promoting trust, love, and compassion?


The answers that emerge demonstrate that American religion is helping needy families and that it is, more broadly, fostering civil society. Yet religion alone cannot save America from the broad problems it faces in providing social services to those who need them most.


Elegantly written, Saving America? represents an authoritative and evenhanded benchmark of information for the current — and the coming — debate.

Robert Wuthnow is Gerhard R. Andlinger '52 Professor of Sociology and Director of the Center for the Study of Religion at Princeton University. His books include American Mythos: Why Our Best Efforts to Be a Better Nation Fall Short (Princeton), Acts of Compassion, and Poor Richard's Principle.

"Based on original research, field work and major studies of the last 20 years, this book will undoubtedly become required reading in the ongoing debate about public funding of religious charities."—Publishers Weekly

"[A] fine book. Wuthnow carefully and clearly analyzes and evaluates the positive roles American religious elites play in maintaining the diversity and cohesiveness of our society and the acceptance of responsibility for helping those in need."—Library Journal

"Wuthnow—as readers of his many previous books would expect—enters this debate armed with good empirical data, which he deftly uses to map out the many interrelated dimensions of faith-based service activity. . . . Wuthnow uses these data . . . to address several questions about faith-based services in contemporary America. There is much to learn from his extensive, careful, and clearly presented analyses. . . . In Saving America?, Wuthnow provides much needed, thoughtful empirical analysis of the intertwined relations between churches and social service activities, and in doing so paints a powerful picture of the mutual interdependence of church and state in American society."—Michele Dillon, Commonweal

"The overarching message of Saving America? is that . . . our civil society is bound together by the glue of love and compassion. . . . Wuthnow takes us through the intricacies of the body politic and sketches, as well, the outlines of the human heart. To this reader the latter is the far more interesting portrait offered in these pages. Who among us give of themselves, how much, to what, and to what end?"—Paul Wilkes, America

"Wuthnow's book looks not only at how much faith communities are doing to serve the poor but also at how well they are doing it. Saving America? makes a great contribution to the field's literature. . . . Though the book provides an enormous volume of information regarding the formal social service programs of congregations and faith-based nonprofits, Wuthnow concludes that the most important work that religious believers can do to serve the poor is to build caring communities that enfold people in lasting, supportive relationships."—Amy L. Sherman, First Things

"Saving America? is an important text that places the rhetoric and politics of 'compassionate conservatism' in its broader context."—Edward Ashbee, Journal of American Studies

"Robert Wuthnow . . . is one of the top sociologists of religion in the world. Saving America is a must read for anyone concerned about religion, politics, and America's future."—Jack T. Hanford, Journal of Interdisciplinary Studies

"The great strength of Saving America? is its comprehensive vision. Beautifully written, it offers findings derived from solid research, and that in itself is an achievement in an area where political ideology abounds. But Wuthnow goes further. He offers wisdom."—John Orr, Professor Emeritus of Religion, University of Southern California

"This well-written, fair-minded, empirically well-grounded book is set to become the authoritative, standard reference for some time to come for discussions and debates around the question of faith-based social services provision and related policy concerns."—Christian Smith, author of Moral, Believing Animals: Human Personhood and Culture